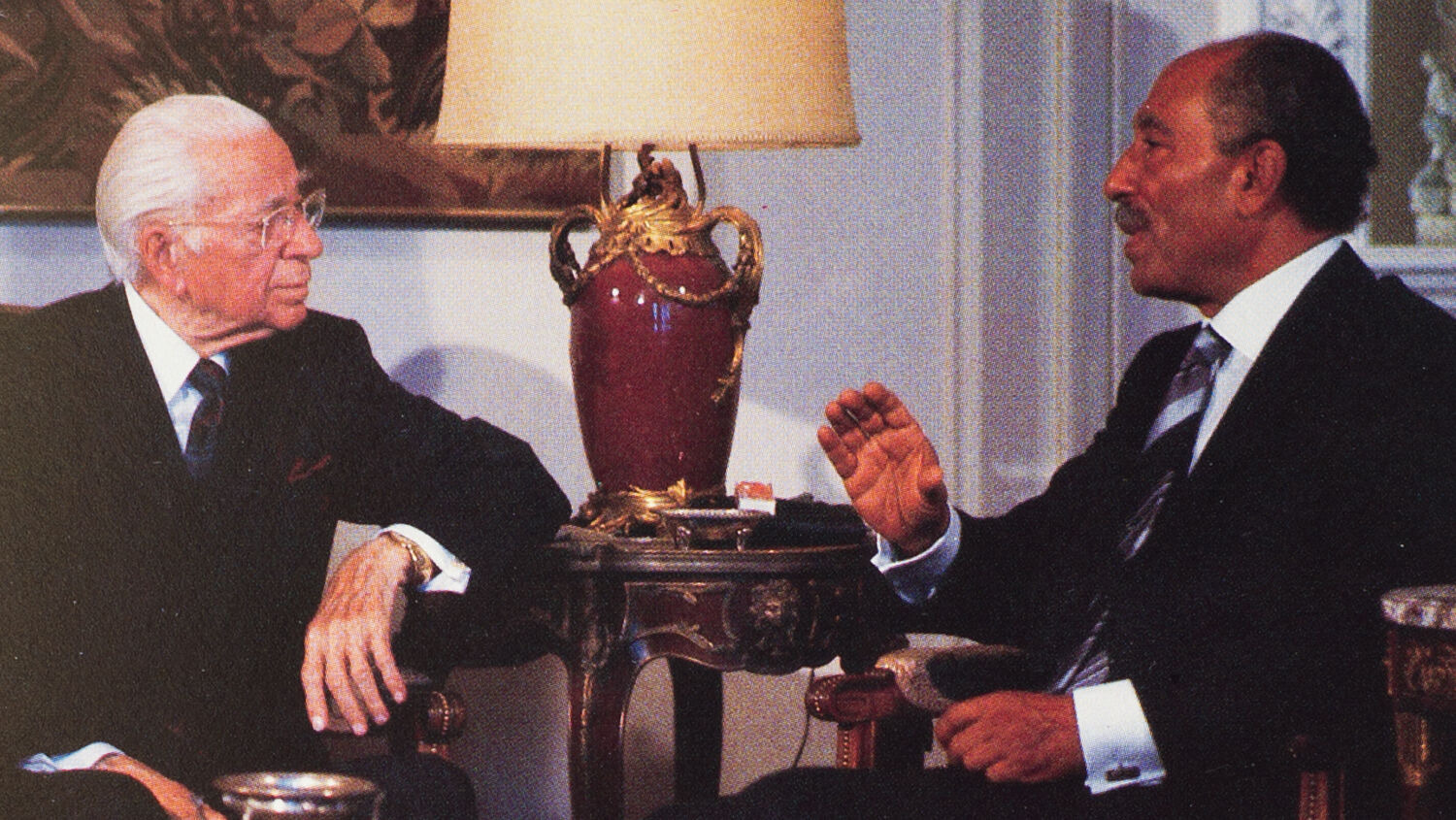 For a moment, we stepped onto the path to peace, and we had a guide.

Forty years ago the impossible happened. For a brief time, there was genuine peace between Israel and the Arab world. On April 26, 1982, the last Israeli forces withdrew from the Sinai Peninsula, ceding that land to Egypt in accordance with a peace treaty signed in 1979, the Camp David Accords. This was an utterly unique peace deal where both sides sacrificed to find real peace. After 30 years of war, there would be 30 years of peace.

What made this peace deal so unique was that “the unofficial ambassador for world peace” was intimately involved. It gave the entire world a glimpse of the real path to peace.

In a world gripped by war, such as the invasion of Ukraine and the savage brutality of tortured and murdered civilians, this is a message all people desperately need to understand.

When Israel became a nation in 1948, the Muslim-Arab world united in an effort to destroy it. For 30 years, war engulfed the Middle East. This was a continuation of over 1,000 years of conflict between Arabs and Jews.

In the War of Independence in 1948, the Six-Day War in 1967 (in which Israel captured the Sinai Peninsula), and the Yom Kippur War in 1973, the nations of Egypt, Jordan, Iraq, Syria and Lebanon were all conspiring to destroy the Jewish state. Egypt was the most powerful Arab nation, with a large military supported by the Soviet Union, and was the leader of the Arab world. The desire to wipe Israel off the face of the Earth was spearheaded by Egypt.

In October 1970, Anwar Sadat became president of Egypt. Sadat had been trained as a soldier and committed his early life to pushing the British out of Egypt. He had conspired with Nazi Germany to oust the British, and helped assassinate a high-ranking Egyptian official. Sadat had participated in the 1952 coup against the Egyptian king and became a ranking official in the government of Gamal Abdel Nassar. Sadat had also participated in fascist groups and the Muslim Brotherhood. He had dedicated his life to Egyptian nationalism and was a true believer, willing to use extreme measures to fulfill that mission.

Early in the 1970s Sadat attempted to have Israel cede the Sinai Peninsula back to Egypt, but these negotiations failed. In 1973, Sadat orchestrated the surprise attack on Israel on the Day of Atonement, Yom Kippur, across the Sinai Desert. At the same time, Syria attacked the Golan Heights. The war lasted 20 days, but Israel was able to defend its territory after some initial setbacks. In the course of the war, Sadat’s brother, a fighter pilot, was killed in action.

It was soon after the Yom Kippur War that Sadat began taking the initiative for peace. United States Secretary of State Henry Kissinger met with Sadat in 1974 to bring a disengagement of Israeli and Egyptian forces in the Sinai. It was also in 1974 that the late Herbert W. Armstrong, the unofficial ambassador for world peace, first met the prime minister of Egypt and gave a speech in Cairo at a banquet to many of Egypt’s top leaders about peace. We wrote on the topic that “Mr. Armstrong was speaking to the leaders of Egypt sharing with them the way of peace. His speech was replete with references to give, love and outgoing concern, which drew vivid word pictures of the law of God codified in His Ten Commandments given atop Mount Sinai.” Mr. Armstrong met with Sadat later that same year. It was highly unusual for an Arab leader to privately meet with a man who had met with nearly every Israeli prime minister and president since the late 1960s.

“Though President Sadat knew of Mr. Armstrong’s strong connections with Israeli leaders, he hosted him anyway and even lavished him with special honor and friendship,” we write in our booklet A Warm Friend of Israel. “While the president spoke at an event attended by his cabinet members and other distinguished members of Egyptian government and society, Mr. Armstrong and his staff were the only non-Arabs present—President Sadat’s special guests.” Before Henry Kissinger’s much publicized Camp David peace talks between Israel and Egypt, Mr. Armstrong was visiting Cairo and Jerusalem.

“Israeli Prime Minister Yitzhak Rabin would later tell Mr. Armstrong emphatically that President Sadat was ready to talk to Israel long before the much-publicized intervention and shuttle diplomacy of the U.S. … It was true: Sadat had confided to Mr. Armstrong early on that he was a man of peace and indicated readiness for a direct meeting.” (Please read our free booklet Ambassador for World Peace to learn more about the legacy of Mr. Armstrong’s visits with world leaders.)

Sadat shocked the world when he announced he would be willing to visit Jerusalem. The leader of the Arab world was willing to sacrifice his prestige and personal safety to go against 1,000 years of conflict. “What a sacrifice this man made!” writes Trumpet editor in chief Gerald Flurry in The Way of Peace Restored Momentarily. He continues:

Virtually the entire Arab world harbored intense hatred for the Jews. Yet Sadat traveled right to the heart of the Jewish state and spoke to the Knesset in Jerusalem. Perhaps he didn’t fully realize how much hostility that move would create, but from that point forward he was a marked man. He had an ambulance following everywhere he drove because he knew a lot of people wanted to kill him. His trip to Jerusalem even triggered assassinations of other Egyptian dignitaries.

Is that not a sacrifice for peace? This man was most unusual. Anwar Sadat became one of a few great leaders in this world. He sacrificed his life for true peace. That is the sign of a great leader!

Anwar Sadat was a man of war, but he eventually sacrificed his life for peace. This courageous step paved the way for the Camp David Accords, signed by Sadat, Menachem Begin and U.S. President Jimmy Carter on Sept. 17, 1978. The Egypt-Israel peace treaty was signed in 1979, which was the cornerstone for Middle East peace for 30 years. Israel gave the Sinai to Egypt in exchange for security guarantees on the southern border. Since that agreement, there has not been a regional war by state actors against Israel, despite the constant war against terrorism.

About this project, Mr. Flurry writes: “The Sadat-Begin-Armstrong peace project left us a message of soaring hope in a hopeless world! Why was Mr. Armstrong invited to be a part of this plan? You would think almost anybody but the leader of a small church would be—yet God’s apostle was.” This peace pact was unique and God used Mr. Armstrong to show an example of how to have real world peace.

“It takes extreme sacrifice to achieve real peace,” writes Mr. Flurry. In 1981, Sadat was assassinated by members of the Muslim Brotherhood, whom he had at one time supported. The assassins were acting on the orders of Iran’s Ayatollah Ruhollah Khomeini. Sadat had allowed the fleeing shah of Iran to come to Egypt after the Iranian Revolution in 1979. Sadat also called Khomeini a maniac during a 60 Minutes interview. Radical Islam assassinated the one Arab leader who had the courage to pursue peace.

Forty years ago, the way to world peace was restored. “You and I must expand our minds to think more like Mr. Armstrong!” continues Mr. Flurry. “He saw this for what it really was. He really did restore the way of peace to the Church and—momentarily—led Sadat and Begin in getting that message to the whole world. God was involved in that effort because His apostle was a part of it. Nobody else understood the depth of what it meant as he did!” God was involved in this peace deal to show the world the way to peace and to give a preview of the wonderful future God has planned for mankind.

That is really what this is all about: world peace under the soon-coming Kingdom of God! “Now I have been in both Aswan and Jerusalem within the last two days,” wrote Mr. Armstrong in 1974. “Dr. Kissinger has been working out a temporary ‘permanent’ peace between Israel and Egypt. I am working toward a real permanent world peace that shall last forever—through the imminent restoration to this Earth of the Kingdom of God!”

This history points us to the hope-filled prophecy of Jesus Christ’s Second Coming. Very soon this world will have the way to peace restored permanently. Nations in the World Tomorrow will be able to consider Anwar Sadat’s example of sacrificing for peace. In a world filled with war and the imminent prospect of nuclear war, this is the message you need to have abundant hope.

To learn more about the way to peace, please read our booklets Ambassador for World Peace and The Way of Peace Restored Momentarily.