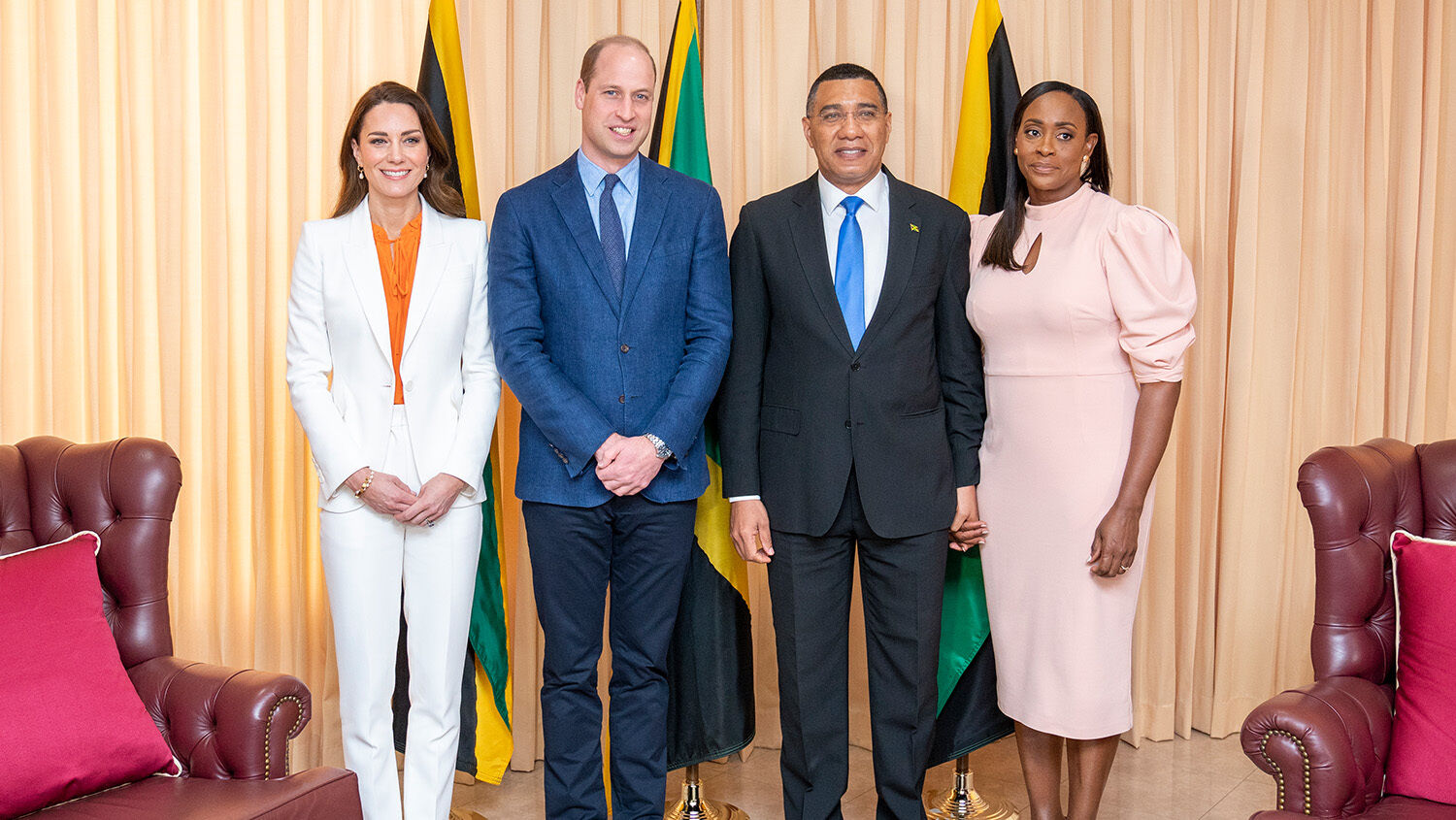 The duke and duchess of Cambridge visit Jamaican Prime Minister Andrew Holness and his wife on March 23 in Kingston, Jamaica.
Pool/Samir Hussein/WireImage

William and Catherine, duke and duchess of Cambridge, concluded a Caribbean tour on March 27. They visited Belize, Jamaica and the Bahamas. All three countries are Commonwealth realms, meaning Queen Elizabeth ii is their head of state. But this might change soon. Their trip was mired in controversy on the future of the monarchy in the Caribbean.

The couple’s first stop was Belize, where they met the Belizean prime minister and governor general. Even before they arrived, there were complications. They were to visit a cacao farm in the village of Indian Creek. However, the villagers protested upon hearing of the coming visit. Indian Creek has a property dispute with Flora and Fauna International, a wildlife charity patronized by Prince William. Other than that, the royal visit went mostly smoothly.

Things weren’t as smooth in Jamaica.

A hundred prominent individuals and organizations signed an open letter to Prince William. The signers made their views of the monarchy plain (emphasis added throughout):

We also note that your visit is part of the celebrations to mark the 70th anniversary (Platinum Jubilee) of the coronation of your grandmother and the 60th anniversary of Jamaica’s independence. We see no reason to celebrate 70 years of the ascension of your grandmother to the British throne because her leadership, and that of her predecessors, have perpetuated the greatest human rights tragedy in the history of mankind.

The group was referring to slavery. Most Jamaicans descend from Africans enslaved on British plantations centuries ago. The group called for reparations from the British government to Jamaica. They also called for Prince William to apologize on behalf of the monarchy.

The authors of the letter didn’t mention anything about Jamaica becoming a republic. But they did highlight the prince’s “unique opportunity to redefine the relationship between the British monarchy and the people of Jamaica.”

Jamaican Prime Minister Andrew Holness was more direct. In his meeting with the couple, he implied that Jamaica is ready to become a republic. “Jamaica is, as you would see, a country that is very proud of our history and very proud of what we have achieved,” he said. “We are moving on, and we intend to attain in short order … our goals and fulfill our true ambitions as an independent, developed, prosperous country.” Holness didn’t specify what he wants Jamaica to “move on” from to become an “independent” nation. But the implication was clear to most: the monarchy.

The duke and duchess received a similar “welcome” in the Bahamas. The Bahamas National Reparations Committee, an organization under the Caribbean Community intergovernmental organization, sent them a strongly worded letter demanding reparations for slavery. “The duke and duchess may not be compelled to make such a declaration [of their family’s benefiting from slavery] during their visit to our shores,” the letter reads. “They may not be able at this time to speak on behalf of the Queen and their government. However, they can no longer ignore the devastation of their heritage. They and their family of royals and their government must acknowledge that their diverse economy was built on the backs of our ancestors. And then, they must pay.”

Once he was back in Britain, the prince made a bombshell statement. “I know that this tour has brought into even sharper focus questions about the past and the future,” he said. “In Belize, Jamaica and the Bahamas, that future is for the people to decide upon.” The implication was he would accept any referendums on rejecting the monarchy.

The British Empire, like every other empire that has ever existed, committed atrocities. Two hundred fifty years ago, Britain—like France, Spain, Portugal, Turkey, Russia and other empires—practiced slavery. But the British Empire was unique in its monumental efforts to wipe out the slave trade. It’s thanks to the British Empire that the trans-Atlantic slave trade was sent to the dustbin of history. (You can read more about this in our article “The Real Reasons Our Statues Are Under Attack.”)

Eventually, Britain voluntarily gave these Caribbean islands populated by freed slaves their independence. And while they have their fair share of societal problems, these Commonwealth realms are functioning democracies because of British influence.

The British Empire once ruled over roughly a quarter of both the world’s population and land area. People from Dublin to Delhi, Montreal to Melbourne, Hong Kong to Harare and many other places were under the British crown. And aside from being the crowned head that held the Empire together, the British monarchy has been a force for good in the world. Twice in the last century, the British king rallied the Empire to battle against tyranny. It was a British king who commissioned the King James Bible, among the most influential texts ever published. The British monarchy has changed world history.

This is all in the past. Today, the number of realms held by the British crown are dwindling. And apparently, the monarchy is OK with this.

“Britain’s government has allowed 17 nations to reject the monarchy, and the Queen recently congratulated Barbados for doing so,” Trumpet editor in chief Gerald Flurry wrote in “Threatening the Crown That Binds Britain.” “The British royals, busy trying to reinvent and ‘modernize’ the monarchy, are wracked with problems and scandals in their own lives. … About 70 percent of Britons favor the Queen, but only 45 percent favor Charles (and only 25 percent of people in their 20s and 30s). How much would his succession to the throne accelerate the move toward secession in Australia, Canada and elsewhere?”

Mr. Flurry wrote that “Jamaica might be the next nation to reject the monarchy.” The latest royal visit suggests this might come sooner than later. Belize and the Bahamas may also follow suit. If all three become republics at the same time, it could trigger the Commonwealth “house of cards” to collapse, stirring others—“Canada, Australia and elsewhere”—to reject the monarchy.

This begs the question: How did one of the most influential institutions in all of Earth’s history resign itself to increasing irrelevancy in the world? There is a deeper, underlying reason for the monarchy’s decline than most realize.

“You need to understand this throne and why recent events surrounding it are so significant,” Mr. Flurry wrote. “There is a hidden reason why Australia and other nations are considering rejecting their last connections to the British monarchy. When you know this, you realize what it is they are really rejecting.”

Find out what it is by reading “Threatening the Crown That Binds Britain.” Also please read “The Real Reason Our Statues Are Under Attack” to learn the truth about Britain’s history with slavery.