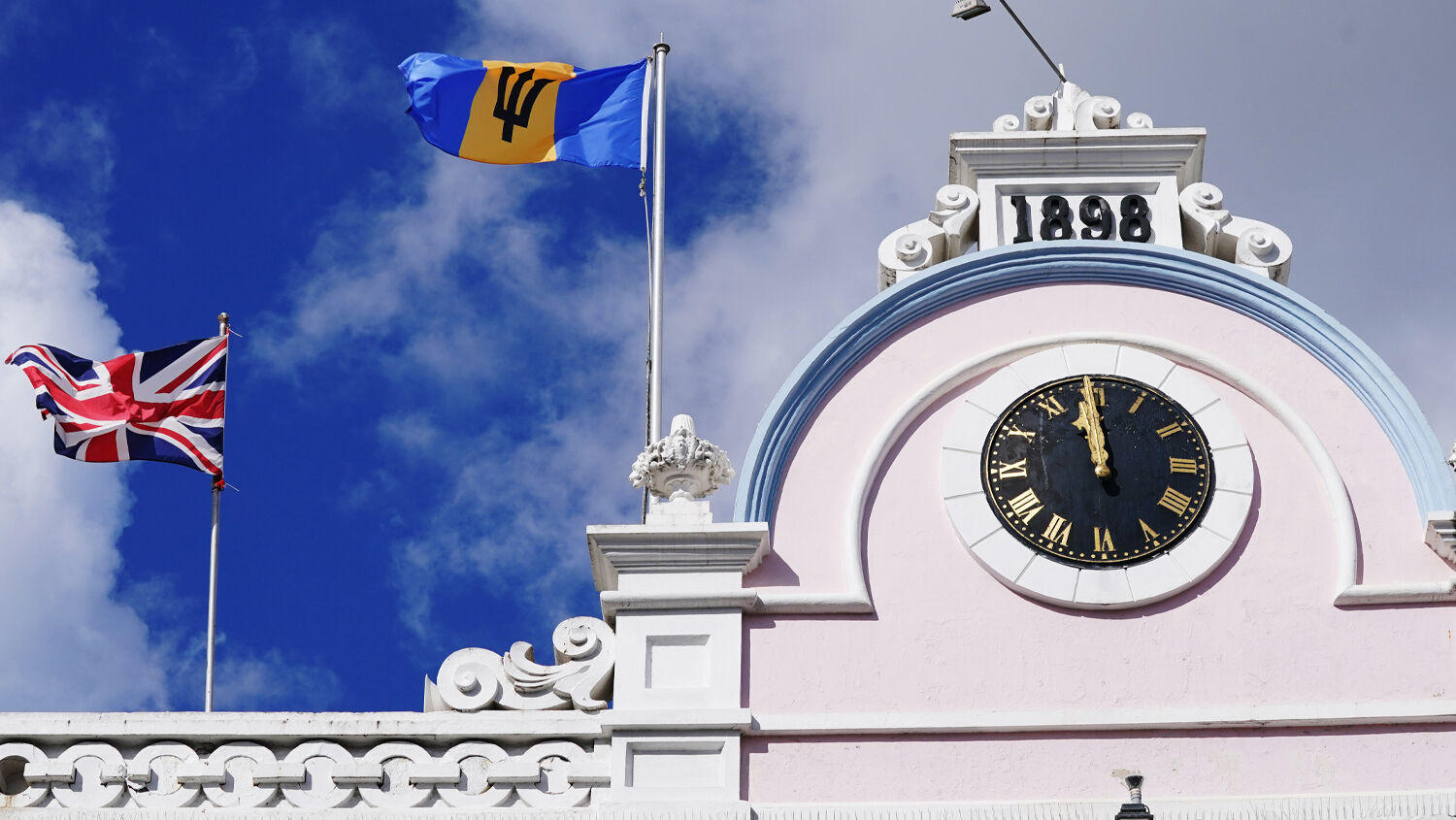 The flag of Barbados flies next to the Union Flag over the Colonnades Shopping Centre, Bridgetown, Barbados.
Jonathan Brady/PA Images via Getty Images

Yesterday, Barbados officially removed Queen Elizabeth ii as head of state and will become a republic.

“This is the end of the story of colonial exploitation of the mind and body,” said Prof. Sir Hilary Beckles, a Barbadian historian. He said this was a “historic moment for Barbados, the Caribbean and all post-colonial societies.” ctv News reported Beckles saying, “The people of this island have struggled, not only for freedom and justice, but to remove themselves from the tyranny of imperial and colonial authority.”

The Caribbean island nation was first claimed by Great Britain on May 14, 1625, when Capt. John Powell arrived during the reign of King James i. Barbados and the other British possessions in the Caribbean, known as the British West Indies, were the center of the sugar industry in the Empire. Of all regions governed by London, the West Indies was probably the most neglected.

When Britain abolished slavery and imposed free trade, it sent the colonies that had no diversified economies into steep decline. The British West Indies’ only major industry was sugar cane, and it enjoyed a monopoly on the British market until the 1840s (when free trade was adopted). The character of the British leaders on Barbados was not up to the challenge, and nothing was done to help the emancipated slaves gain an education and advance their lives. The textbook The Evolution of the British Empire and Commonwealth states:

In the third quarter of the 19th century, when Britain was sitting on top of the world and much of her colonial empire was marching along the road of political freedom, her tropical colonies were in a sad plight. Economically they were passing through a painful period of readjustment to free labor and free trade …. But socially most of them sank to their lowest level ….

A rebellion in Jamaica in 1865, surcharged by the results of the American Civil War, sparked political changes and gave the colonies more independence. The textbook continues: “The general result was wholesome. Good government replaced bad government. … The blacks began to feel the full benefits of emancipation, and the whites found that the new system speeded economic recovery.”

The British Commonwealth of nations began to emerge out of the empire at the end of 1918. Despite many colonies being made dominions, Britain still controlled foreign policy and the British Parliament overruled the national governments of Canada, Australia and many others. At the end of World War i, the dominion leaders demanded that Britain give them their own seat at the Treaty of Versailles and in the League of Nations in recognition of the massive contribution made for the victory in Europe. Britain agreed, and the commonwealth was born.

The Evolution of the British Empire and Commonwealth continues: “These constitutional regulations of the commonwealth were essentially British in character. They were not legislation, for the body that promulgated them had no legislative authority; nor were they a legal compact, for the constitutional governments did not adopt them as such. They were simply a set of voluntary rules that the British family of nations drew because they wished to follow them in order to stick together. Good faith in the family relationship was the only sanction; and this was much stronger than outsiders could appreciate, because there was nothing quite comparable to this family relationship in the rest of the world.”

In his landmark book The United States and Britain in Prophecy, the late Herbert W. Armstrong explained that the British peoples are the modern-day descendants of the Israelite tribe of Ephraim, the son of Joseph. Ephraim and his older brother Manasseh were given the birthright blessings by Jacob. In Genesis 35:11, God told Jacob, “[A] nation and a company of nations shall be of thee ….” When Jacob blessed Ephraim and Manasseh in Genesis 48:19, Jacob specifically prophesied Ephraim would be this company of nations. Mr. Armstrong explained: “Then, speaking of Manasseh and his descendants alone, Jacob said prophetically: ‘… he also shall become a people [nation], and he also shall be great: but truly his younger brother [Ephraim] shall be greater than he, and his seed shall become a multitude [a company, or commonwealth] of nations’”

But beginning in 1800 these two little nations began to sprout and to grow into vast national riches and power such as no people ever possessed. Soon Britain’s empire spread around the world, until the sun never set upon her possessions. Canada, Australia, South Africa were given dominion status—made free and independent nations, ruling themselves independent of England—a company, or commonwealth, of nations joined together, not by legal government, but solely by the throne of David!

The British monarchy are actually descendants of the Davidic dynasty! As Mr. Armstrong explained in The United States and Britain in Prophecy, God promised King David in 2 Samuel 7 that his throne would be “established forever.” The throne of David continued through the line of Irish, Scottish and English kings, including Queen Elizabeth ii. That was the heritage and the government that united the British Empire and commonwealth.

Sir Winston Churchill called the British monarchy the “golden thread” that held the Empire together. During the Blitz in 1940, Churchill wrote: “When our beloved Sovereign and the Queen come from their battered palace to a building which is not without evidence of the strokes of war, when the Sovereign comes to open Parliament in person and all his faithful commons to the discharge of their duties, at every step, in every measure, in every formality, and in every resolution that we pass, we touch customs and traditions which go back far beyond the great Parliamentary conflicts of the 17th century; we feel the inspiration of old days, we feel the splendor of our political and moral inheritance.” Yet even Churchill did not understand that the British monarchy’s intrinsic value to the British people emanated from the fact they were descendants sitting on David’s throne.

As Mr. Armstrong said, the British Empire and commonwealth was solely joined together by the throne of David.

Trumpet editor in chief Gerald Flurry discusses a major change in Britain’s throne in his book The New Throne of David. He warned in 2018 that this change was an “indication that we would see a rapid decline in Britain’s royal family.”

Will there be a subsequent fracturing of the commonwealth? Mr. Flurry wrote in the January 2022 issue of the Trumpet magazine in “What Happens When Queen Elizabeth Dies?”:

The Queen is recognized as head of state in 15 countries outside the United Kingdom out of 54 countries that make up the British Commonwealth. There are strong movements in Canada and Australia to break from the British crown. Scotland is also trying to leave the UK. Barbados renounced the monarchy on Nov. 1, 2021. Jamaica could be next. How much would a rule by King Charles accelerate this trend?

Barbados might start a revolutionary movement in the other commonwealth nations to follow suit. Right now Canada, Australia and New Zealand are under the control of radical-left leadership. The Statute of Westminster (1931) is the “one great legal landmark in the history of the commonwealth.” The statue amended the commonwealth nations’ constitutions to make them fully independent, but kept the monarchy as the head of state. To remove the monarchy now would be to remove one of the remaining checks and balances to the executive power of radical-left leaders. Churchill said in a 1937 broadcast on Radio Luxembourg: “No one can presume to set himself up as national representative against the hereditary rights of the King.”

The monarch, although a figurehead, has been an anchor of tradition and a check against the executive power. The radical-left leadership desiring the fundamental transformation of these English-speaking nations, whose legal and governmental traditions are rooted in British rule of law, want nothing more than to throw off the shackles of these traditions that oppose their Communist agendas. Removing the monarchy would be the perfect excuse to change the constitution to suit their agenda.

The British peoples, and all the commonwealth nations, are in steep decline. They are also under attack from forces within. The Empire and commonwealth upon which the sun never set is now entering its darkest night. However, there is a glimmer of hope on the horizon. God has a brilliant plan for a throne that will unite not just the commonwealth but the whole world. You need this hope and this vision in your life right now. To capture that hope, to fill your life with all-inspiring vision, read Mr. Flurry’s free book The New Throne of David.