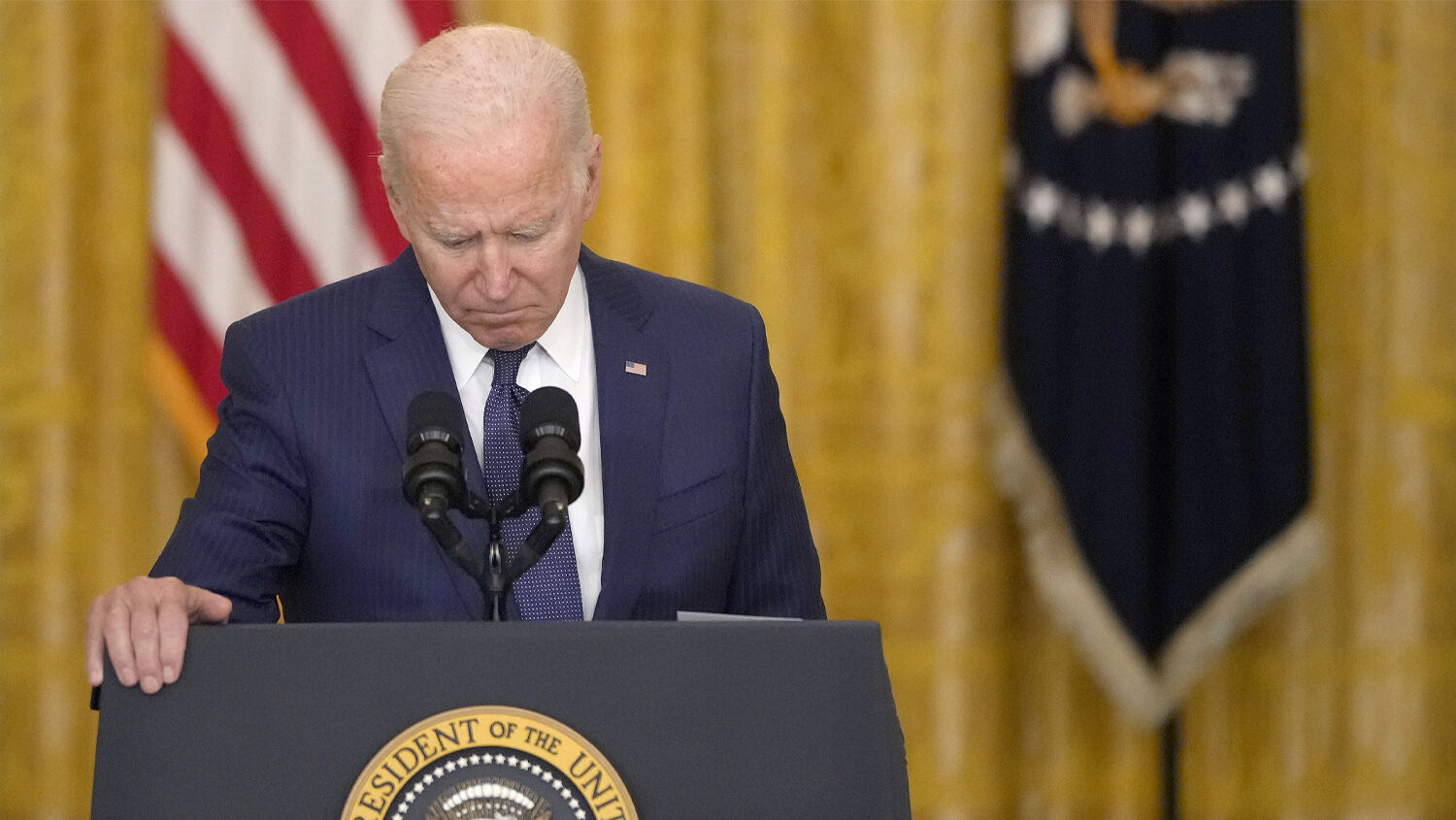 U.S. President Joe Biden speaks about the situation in Kabul, Afghanistan from the East Room of the White House on August 26, 2021 in Washington, DC.
Drew Angerer/Getty Images

How the Afghanistan disaster changed the course of history

We watched the world change before our eyes. The chaos, tragedy and violence that engulfed America’s withdrawal from Afghanistan was a hinge upon which the entire world order has turned. “There are events and individuals in history so far outside the ordinary that a mere record of facts, however detailed, cannot convey their meaning,” writes historian Andrew Lambert. “We do not understand them literally, but at a heightened, spiritual level. Their magic attracts the attention of every generation: They continue to shape our views, mold our actions.”

When we think of turning points, we may think of the Battle of Trafalgar, Waterloo, the Battle of Gettysburg, the Emancipation Proclamation, the Munich Agreement, the Battle of Britain, the Suez Crisis or the fall of the Berlin Wall. These dramatically influenced the course of future events due to the tremendous consequences of their outcomes.

The Afghanistan debacle will be added to the list of critical turning points. However, it is a pivot toward collapse. You need to understand this event “at a heightened, spiritual level” because it is rapidly fulfilling several key Bible prophecies.

The Hinge of Fate

Trumpet editor in chief Gerald Flurry wrote in the October 2021 Trumpet magazine, in the article titled “This Isn’t Incompetence. This Is Treason!”: “This has been the worst foreign-policy disaster in the nation’s history. This terrible defeat was a spectacle seen by the entire world—and they were watching intently! It will mar our history, perhaps for the rest of time. … It sent an unmistakable message to both allies and enemies worldwide: America does not keep its promises. We do not honor commitments. We cannot be trusted even to protect our own people!”

America’s enemies were watching and have seized this moment of opportunity, as Mr. Flurry warned: “Other nations around the world see this clearly. They are taking advantage of this and preparing to replace American dominance with their own dominance.” Many months went by, and there seemed to be little immediate consequences to the disaster. Now Ukraine is being slowly swallowed by the Russian military invasion. It is only one step in Russian President Vladimir Putin’s plan to overthrow American dominance and seize his own. But he is not the only one with such plans.

“Instead of condemning Putin’s horrendous invasion, many world leaders remain silent,” wrote United States Rep. Mark Green for RealClearPolicy. “Despots like [Chinese President] Xi Jinping, [North Korean leader] Kim Jong-un, [Iranian Supreme Leader] Ayatollah Khamenei, [Venezuelan President] Nicolás Maduro and others are silently watching, waiting to see how they too can seize the moment and consolidate power.” These regimes have been working to undermine America’s world leadership for decades, and in the world of realpolitik, they will seize any moment of weakness or vulnerability.

“Every action, and every instance of inaction, is a learning point for world leaders,” continued Green. “Despots are not stupid—they are cold, calculating and strategic. Putin would not have invaded Ukraine if he had perceived strength from the United States. Weakness is provocative, and Putin sensed weakness.” The despots are on the march because America was not willing to show strength against the Taliban. Putin decided to invade Ukraine because Joe Biden deliberately decided to execute the Afghan withdrawal in a way that undermined America’s reputation, prestige and security.

I visited Ukraine and nato Headquarters in Brussels a week before Putin launched his invasion. I spoke with their top government officials, military leaders and civilians, and what did they have to say? That Putin would not have escalated if the United States had not botched its withdrawal from Afghanistan. …

President [Joe] Biden’s weakness is brighter than the Nashville neon lights, and the world’s despots are watching. Just as one could draw a straight line from [Barack] Obama’s “red line” in Syria to the Russian invasion of Crimea, one can draw a straight line from the abandonment of Bagram to the Russian assault on Ukraine today. In a mere six months, Putin made his move. Weakness is provocative.

The other dimension to this turning point is that it was deliberately engineered by Obama and the radical left in America. Mr. Flurry writes in Great Again: “The nation’s foreign policy is utterly transformed. We have seen apologies, concessions and surrenders made to dictators and despots …. Nations that have relied on America for leadership, strength, security, protection and largesse face a new reality and are having to forge alternate relationships, even if they undermine America.” The Joebama administration aims to have America’s power collapse on the world stage, so they can become despots within America. (Please read Mr. Flurry’s booklets America Under Attack and Great Again to learn about that reality.)

The Hidden Enemy of America

In six months, the entire balance of world power has begun shifting toward the enemies of America. Russia invaded Ukraine, but what is next? Will China invade Taiwan, or will Iran attack Israel? What about our allies? Will Japan and Australia stand with America, or not feel secure in American guarantees and instead ally with China?

Perhaps the biggest enemy of America that was affected by the Afghanistan withdrawal was Europe. The Bible warns that a German-led Europe will betray America and be the chief author of its final defeat.

As the Afghanistan debacle was unfolding, Mr. Flurry wrote in his article “After Afghanistan and AUKUS—Watch Europe!”: “Europe is in a precarious state right now, and is on the cusp of radical change. We must understand how the Afghanistan debacle is hastening that change—and will help to catalyze the formation of this biblically prophesied empire! … But we are beginning to see how that withdrawal, and the collapse of American leadership it represented, is changing the world.”

Since that warning was written in October, Europe has undergone some radical changes. The Trumpet was reporting on the German betrayal of Ukraine as Russian troops began their invasion. This prompted Germany to radically change course on defense spending, pledging to spend $112 billion on defense and purchasing F-35 multirole fighters from America that have stealth capabilities and can deliver nuclear payloads. Germany is about to become a military superpower because it fears Russia and because it sees America’s weakness.

Mr. Flurry then warned: “But Bible prophecies about the next resurrection of the Holy Roman Empire show that Germany will soon be spending substantially more on its military—and not within any kind of U.S.-led framework.” That is exactly what has happened in Germany, and the spark that caused this action can be traced to America’s humiliation in Afghanistan.

Russia and Germany have a history of making deals. “Could it be that Germany agreed to let Russia make those expansionist moves [referring to the 2008 invasion of Georgia and 2014 annexation of Ukraine’s Crimean Peninsula] in exchange for Russia not interfering with Germany’s conquest of the Balkans back in the 1990s?” Mr. Flurry asked. “What else might these two have agreed to that they have not yet acted on?” Was Ukraine part of this deal made years ago, but the time was not right to act? Did Afghanistan prompt these plans to be put into motion?

“History shows that Germany and Russia are not actually partners. When they enter into peace deals and economic partnerships, it is a signal that either or both are preparing for some kind of imperialistic exploit,” Mr. Flurry warned. Four years on and Putin has now invaded Ukraine, and Germany has begun rearming. This is just the beginning of what the despots have planned. Keep watching Russia, China, Iran and Europe.

The World Order of Hope

We are witnessing the dawn of a new age. “America is not just declining, it is in the last throes of death,” Mr. Flurry wrote. “It is being destroyed before our eyes. Many are now in open despair. This Afghanistan disaster is the worst evidence ever of how the United States has collapsed as a superpower!” The violence and destruction in Ukraine is only a small taste of what this new age will bring to the world.

In Luke 21:24, Jesus Christ called the time of unparalleled violence and destruction just before His Second Coming the “times of the Gentiles.” Gentiles are non-Israelite peoples. The modern Israelite nations, especially Britain and America, have given the world two centuries of relative stability because of the fulfillment of God’s promises to the patriarch Abraham. You can prove this for yourself by reading Herbert W. Armstrong’s book The United States and Britain in Prophecy. The Bible prophesied Britain and America’s rise and their subsequent decline and fall because of national sins. You are witnessing this collapse today.

“The dramatic fall of the English-speaking nations the world is now witnessing is a horrendous warning,” wrote Mr. Flurry in “After the Fall of the English-Speaking Peoples—What Next?” “The Israelite nations are falling, and Gentile nations are taking charge of the world right now. This shows that we are now in the outer edges of the catastrophic storm that Christ forewarned of!” The calamitous withdrawal from Afghanistan is part of this dramatic fall. The worst part is that America is willingly surrendering world leadership, power and security.

The Great Tribulation occurs during the times of the Gentiles. “When this prophecy is completely fulfilled, all three of those Israelite nations will be destroyed and enslaved, and replaced by two new superpowers, each with many strong allies: one led by Germany, the other by Russia and China,” wrote Mr. Flurry. “These Gentile powers will clash in the worst war ever on Earth.” God calls these Gentile powers beasts because they wage war like savage wild animals. As Russian tanks and missiles destroy Ukraine, you see an example of the new world order.

The Bible shows the only way to stop these Gentile empires is with force. And the Bible says they will be stopped in their tracks by overwhelming, all-powerful force. Jesus Christ is going to return and defeat these Gentile nations at Jerusalem and usher in God’s world order, the Kingdom of God, which will bring peace, unity and prosperity to all of the Earth! That is the new world order we can hope for in these dark days.

To understand these prophecies in more detail, please read our booklets Germany and the Holy Roman Empire and Russia and China in Prophecy.