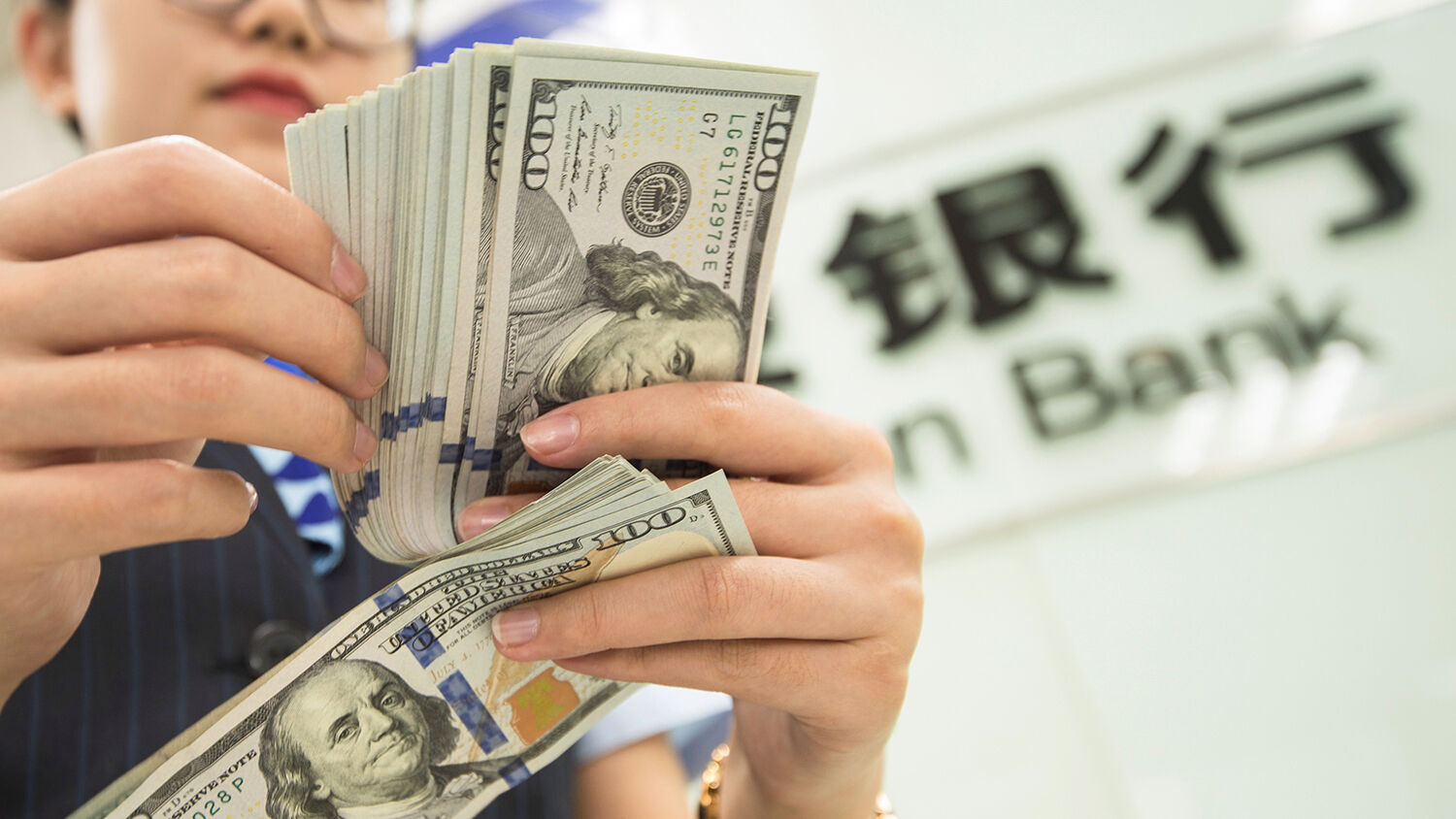 A Chinese bank employee counts US dollar bills at a bank counter in Nantong in China’s eastern Jiangsu province on August 6, 2019. - The Chinese currency steadied on August 6, a day after Beijing let the yuan weaken against the dollar, sending markets into freefall and leading the US to formally designate China a “currency manipulator”.
STR/AFP via Getty Images

Within minutes of Russian President Vladimir Putin announcing the recognition of two regions of Ukraine as breakaway republics on February 21, rocket attacks began raining down on Ukrainian cities. The insurgency war that began in 2014 became a full ground invasion. This is the first war of a first-rate power against a Western nation since the end of World War ii.

What was the United States’ and other Western nations’ response to this raw aggression? Economic sanctions. This has been the go-to foreign-policy tool to try to coerce and punish regimes that oppose the present status quo of the balance of power. Russia has more or less faced sanctions constantly for the past 30 years, but the latest round of sanctions are intended to isolate and cut off Russia’s economy from the West.

The sanctions include freezing assets of Russian oligarchs, banning its imports and exports, targeting luxury goods, travel bans on Russian officials, and banning all flights from Russia. The U.S. banned transactions from the Central Bank of Russia, meaning Russia cannot access foreign assets it has in U.S. dollars or do international business with U.S. dollars. The “nuclear option” of the sanctions is banning some Russian banks from swift, the main payment method used by businesses around the world. The question is, will the sanctions stop Russia?

These sanctions not only will fail to stop Russia but are actually hastening a complete revolution in the global economic framework that is prophesied in the Bible. The sanctions will hurt the U.S. and the English-speaking peoples more than they will Russia.

The sanctions have had an immediate impact on the Russian economy: The ruble has plunged 30 percent since some banks were banned from swift, and Russia cannot access $600 billion in foreign assets since the U.S. blocked transactions with the Russian central bank. These are devastating short-term effects.

However, the very same nations imposing these sanctions are paying Putin’s Russia $1 billion a day for natural gas and oil. This is the underlying flaw in any measures meant to punish Putin: The global energy supply is so interconnected to Russia it is impossible to cripple Russia’s economy without crippling your own nation. This is due to deliberate economic policies by Western nations to stop producing their own gas and oil in favor of green energy initiatives.

“Russian gas made up 42 percent of Europe’s gas imports via pipeline alone. Shutting that off would create painful economic fallout for European countries that are already grappling with the specter of high inflation,” reported Politico. Europe imports $31.9 billion worth of petroleum oils and crude, and $14.9 billion in other petroleum products. Europe imports $8 billion of natural gas. Europe also consumes 45.2 percent of Russian mineral exports (including energy). The total money Europe paid Russia in 2020 for mineral imports ($64.1 billion) exceeded the Russian military budget for that year ($61.7 billion).

According to the U.S. Chamber of Commerce, the U.S. imported 245 million barrels of crude oil and petroleum products from Russia in 2021, which was a 79 percent increase from four years ago. Canada was the only nation to ban the import of crude oil from Russia, but Canada has not imported any since 2019. Canada will still import $550 million of refined petroleum from Russia each year.

Even banning certain Russian banks from swift appears worse than it actually is. The “selected banks” most likely means those needed for importing Russian energy are unaffected. Even the banks banned from swift can still do business with Western nations; it simply requires an alternative method of payment.

These sanctions are merely face-saving measures by world leaders whose energy policies have empowered Putin financially and politically to invade Ukraine. What Western leaders don’t understand is that Putin’s military ambition cannot be thwarted through emotional speeches, strongly worded social media posts, or even financial sanctions. The only thing that will ever stop Putin is strength and force.

What is worse is these sanctions are actually hastening the decline of America’s economy and international power, not Russia’s.

In the short term, these sanctions will actually hammer Americans with stagflation. “Today’s crisis represents a geopolitical quantum leap. Its long-term implications and significance can hardly be overstated,” wrote Project Syndicate. “The war in Ukraine will trigger a massive negative supply shock in a global economy that is still reeling from covid-19 and a yearlong build-up of inflationary pressures. The shock will reduce growth and further increase inflation at a time when inflation expectations are already becoming unanchored.”

The United States has the ability to use economic sanctions around the world because of its position as the world reserve currency, as JP Morgan ceo Jamie Dimone explained: “The U.S. is in a unique position of having the global reserve currency, which underpins a substantial portion of international trade and foreign exchange transactions. … The widespread use of the dollar in international markets, for instance, allows the United States to affect foreign-policy goals through financial market channels and may also confer certain reputational benefits.” That is how the United States is undermining Russia’s economy and influencing swift.

But what happens if Russia fights back economically? Dimone continued: “However, overuse of these powers could compel other actors to try to replace dollar transactions, as Russia already did to some extent following earlier sanctions.” Is it possible that by overstepping economic sanctions the U.S. opened the door for other world powers to replace it as the world reserve currency?

“Aside from the immediate collateral damage, excluding Russian banks from swift risks longer-term consequences for international finance,” wrote the editors at Bloomberg, “As with any network, the value of swift depends on the number of banks that use it. … The example of Russia could prompt others—such as China—to turn to alternatives, fragmenting the payments system and potentially even undermining the U.S. dollar’s dominance as the global reserve currency. One could even imagine a future in which rival nations turned similar financial weapons against the U.S.” The Asian power bloc is uniquely positioned to make this threat a reality.

The current situation in Ukraine reveals that Europe is so integrated with Russian energy and minerals that the Continent could not cut off Russia economically without facing ruin itelf. Data from the World Integrated Trade Solution shows that by far China is Russia’s most important trade partner. China holds $1.1 trillion in U.S. debt, and Japan holds $1.3 trillion out of the more than $7 trillion debt that is held by foreign nations. That gives China and Japan the unique power to crash America’s status as reserve currency if they shed large amounts of that debt they hold. In the long term, this Asian power bloc can inflict far more economic damage on the United States than the United States can against Asia in the short term.

An analysis by Pepe Escobar at the Cradle summarized some commentary from economist Michael Hudson: “On the confiscation of Russian foreign reserves and cut-off from swift, the main point is ‘it will take some time for Russia to put in a new system, with China. The result will end dollarization for good, as countries threatened with “democracy” or displaying diplomatic independence will be afraid to use U.S. banks.’” Russia’s main workaround will be to work with China in luring other nations from America’s hegemony, especially Europe, into a new Russia-China system.

“So the U.S. itself, in another massive strategic blunder, will speed up de-dollarization,” continued Escobar. “As the managing director of Bocom International Hong Hao told the Global Times, with energy trade between Europe and Russia de-dollarized, ‘that will be the beginning of the disintegration of dollar hegemony.’” Experts believe a new Russia-China payment system to bypass swift will be created combining the Russian System for Transfer of Financial Messages with the Chinese Cross-Border Interbank Payment System. Escobar wrote: “The key fact is that the flight from the U.S.-dominated Western financial system is now irreversible across Eurasia—and that will proceed in tandem with the internationalization of the yuan.” The new world economic framework is already being built. Shortly after Russian banks were removed from swift, shares for China’s Cross-Border Interbank Payment System surged as it is expected to become the international alternative. Dylan Grice of Calderwood Capital explained on Twitter that China will be sure to shed all U.S. dollars before invading Taiwan. It is a turning point in monetary history.

All of these developments are the direct fulfillment of Bible prophecy. This monetary turning point is at the heart of what is prophesied to happen during the Great Tribulation.

The Mart of Nations

Jesus Christ called the period just before His return “the times of the Gentiles” (Luke 21:24). After centuries of the world being dominated by the modern-day Israelites, such as Britain and America, the balance of power would shift dramatically to Gentile power blocs. The two main Gentile empires are a European resurrection of the Holy Roman Empire, led by Germany, and an Asian alliance of Russia and China. These Gentile powers have not only military might but economic power. Trumpet editor in chief Gerald Flurry writes in China’s Dangerous Move Against America:

Some 2,700 years ago, God inspired the Prophet Isaiah to sound the alarm about a massive trade bloc that would form in the end time. Isaiah 23:3 describes it as a “mart of nations.”

Verse 1 shows that a lead nation in this trade bloc will be “Chittim.” In my booklet Isaiah’s End-Time Vision, free upon request, I prove that Chittim, or Kittim, is an ancient name for China. Another leading power in the trade bloc is “Tyre,” a name representing the commercial center of modern Europe. A related passage in Ezekiel 27 mentions ancient names for modern Russia and Japan showing that they too will join this “mart.”

This mart of nations will involve a European empire and the Asian nations forming a trade bloc that will exclude Britain and America. The sole purpose of this economic alliance is to destroy the English-speaking peoples, especially the American superpower. Prophecies in Deuteronomy 28:52 and Ezekiel 4:4-5 reveal that the Great Tribulation (Matthew 24:21) begins with this economic siege by this mart of nations, as Mr. Flurry explains in Ezekiel—The End-Time Prophet. This time of terrible suffering caused by national sins and satanic attacks begins with a trade war. Mr. Flurry writes in Isaiah’s End-Time Vision:

Should Europe, the resurrected Holy Roman Empire, find a way to take advantage—even for a moment—of key resources and strategic holdings of China, Russia and Japan, it would have more than enough power to besiege the Anglo-Saxon nations and enslave them.

Is this the moment Germany, Russia and China need to seize the economic balance of power away from America? Is Russia’s pivot away from swift the spark that will help form this mart of nations? The suffering in Ukraine is only the beginning of the suffering the times of the Gentiles will inflict on the world. Events are moving at a lightning pace, but it is leading to the prophesied return of Jesus Christ, which is the best news we could ever hear.

To learn more, please read China’s Dangerous Move Against America and Russia and China in Prophecy.