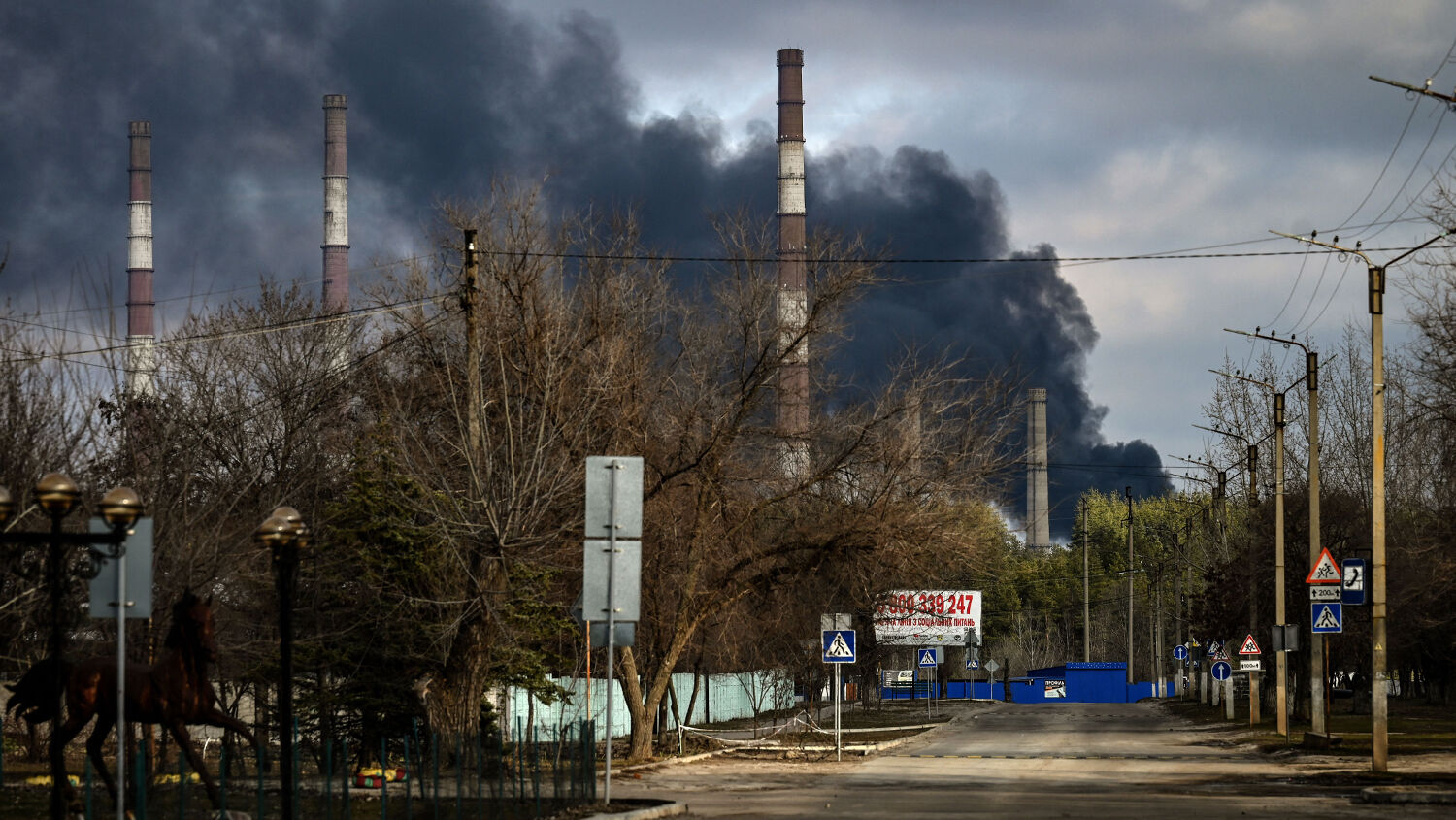 Smoke rises from a power plant after shelling outside the town of Schastia, near the eastern Ukraine city of Lugansk, on February 22.
ARIS MESSINIS/AFP/Getty Images

On February 24, Russian President Vladimir Putin did what European diplomacy hoped to prevent: He launched a full-scale war in Ukraine. Germany’s military generals, security experts and commentators agree that Germany allowed this to happen and its pacifism has to end. Others went further, saying: Russia declared war against Europe!

Jacques Schuster wrote for Germany’s Welt that this isn’t just a war between Russia and Ukraine, but indeed a “Declaration of War on Europe” (Trumpet translation throughout).

Immediately following Russia’s invasion of Ukraine, the North Atlantic Treaty Organization’s Response Force readiness increased. “The 13,700 German servicemen and women of the roughly 50,000-strong response force must now be ready to march even faster,” Bundeswehr.de noted. Additionally, nato has put more than 100 warplanes and 120 warships on alert to protect its eastern flank.

This may mark the beginning of a drastic shift in Europe’s war preparedness.

“Anyone who still had doubts about what Russia’s president is up to is now being taught the hard way,” Schuster wrote. “Vladimir Putin is taking back part of the Soviet empire and attacking the European peace order.” After noting that large-scale sanctions have to follow, Schuster added: “Make no mistake about it: Europeans will suffer, too. Sanctions and the now necessary military buildup —including the Bundeswehr—will hit us—especially in the midst of the coronavirus pandemic. But letting Putin have his way would mean giving up our freedom sooner or later.”

Bild wrote: “In recent years, Germany has always believed only in the power of diplomacy. But guys like Putin don’t care about diplomacy. They only take you seriously if you carry a gun under your diplomatic suit. … Putin’s strength is a result of our weakness!”

Germany’s Army Inspector General Alfons Mais wrote on Linkedin: “You wake up in the morning and realize: There is war in Europe. … In my 41st year of service in peace, I would not have thought I would have had to experience another war. And the Bundeswehr, the army that I am allowed to lead, is more or less blank. The options we can offer policymakers to support the alliance are extremely limited. We all saw it coming and were unable to penetrate with our arguments to draw and implement the conclusions of the annexation of Crimea.” He then called on Germany to leave the Afghanistan mission behind and reposition itself; “otherwise, we will not be able to implement our constitutional mandate and our alliance obligations with any prospect of success.” In other words: The time has come to prepare for war!

Nicole Deitelhoff of the Hessian Foundation for Peace and Conflict Research noted in an interview with faz.net: “Unfortunately, we have to invest in rearmament. … We just got a new federal government, and it has a lot of great plans. I assume that it will not be able to implement many of them now, or at least not immediately. We will have to invest an enormous amount of money in our defense and that of our allies. … The Bundeswehr is still inadequately equipped in many areas. The fact that not even the 5,000 hard hats have arrived in Ukraine so far shows how difficult the procurement situation is. Investments must also be made in Bundeswehr locations within Germany. All of this will cost a lot of money.”

She also noted that this will require a drastic change in Germany’s military thinking: “Equipping the Bundeswehr well is always immediately equated in Germany with ‘militarization’ and ‘aggression.’ But the invasion of Ukraine is now the decisive shock that makes it clear to us: We have to do this; we can’t do anything else.” The signs of war are all around us!

Throughout Europe, newspapers are declaring the death of diplomacy. Spiegel Online’s February 23 Morning Brief was titled, “Europe—A Continent at a Crossroads.” “Hope dies last, so the saying goes,” the brief stated. “But what actually comes after that—when hope has died? This is the question that must be asked by all those in German politics who, when it came to Putin’s aggressions, put their faith in the Minsk Agreement and the Normandy format talks until ‘the very end.’”

Look at a map. Ukraine used to be a large buffer between Europe’s heartland and the Russian giant. But with Russia moving into Ukraine and Belarus, it moves right to the border of Poland. What do you think people in Poland, Hungary and the Czech Republic think right now? If they want to survive, they better unite. They realize they need strong, robust military cooperation in Europe. They also realize they need a leader.

We are about to see the sudden dramatic militarization of Europe and the start of deeper military cooperation. What’s more, we are about to see a united military empire rise in the heart of Europe. How do we know? It’s not just the news that indicates the imminent rise of this empire but also Bible prophecy. In 2014, shortly after Russia annexed Crimea, Trumpet editor in chief Gerald Flurry wrote:

In 1981, late educator Herbert W. Armstrong wrote: “When this Holy Roman Empire does happen, it will happen suddenly. So quickly it will take your breath! And the whole world will gasp in awe and wonder when they see the things that are prophesied. For example, 10 nations in Europe—probably five of them in Western Europe and five in Eastern Europe—reviving, resurrecting, the so-called Holy Roman Empire of the Middle Ages.”

This militaristic empire is about to shock the world again! The people in Europe are afraid, but Europe’s military strategists have likely seen this coming and are ready to exploit that fear.

Germany used Russia to expand its power in World War ii. Mr. Flurry wrote in November 2008: “[D]id you know that Germany and Russia have probably already dealt with their most urgent differences? … I believe that Germany’s leaders may have already agreed to a deal with Russia, a modern Hitler-Stalin pact where Germany and Russia divide countries and assets between themselves. This agreement would allow each to turn its sights on other targets. Any such deal that may have been struck between Germany and Russia is a precursor to war!”

Underneath the surface, Germany is pursuing a secret strategy, as prophesied in the Bible. Mr. Armstrong explained in his booklet Who or What Is the Prophetic Beast? that a beast in the Bible represents an empire or kingdom. Notice this prophecy in Revelation 17: “The beast that thou sawest was, and is not; and shall ascend out of the bottomless pit, and go into perdition: and they that dwell on the earth shall wonder, whose names were not written in the book of life from the foundation of the world, when they behold the beast that was, and is not, and yet is” (verse 8). As you watch the news, watch as this beast rises again.

I encourage you to read “The Crimean Crisis Is Reshaping Europe!” and order a free copy of Who or What Is the Prophetic Beast? Faster than ever we are about to see Bible prophecies be fulfilled! Our literature will help you understand what is ahead.