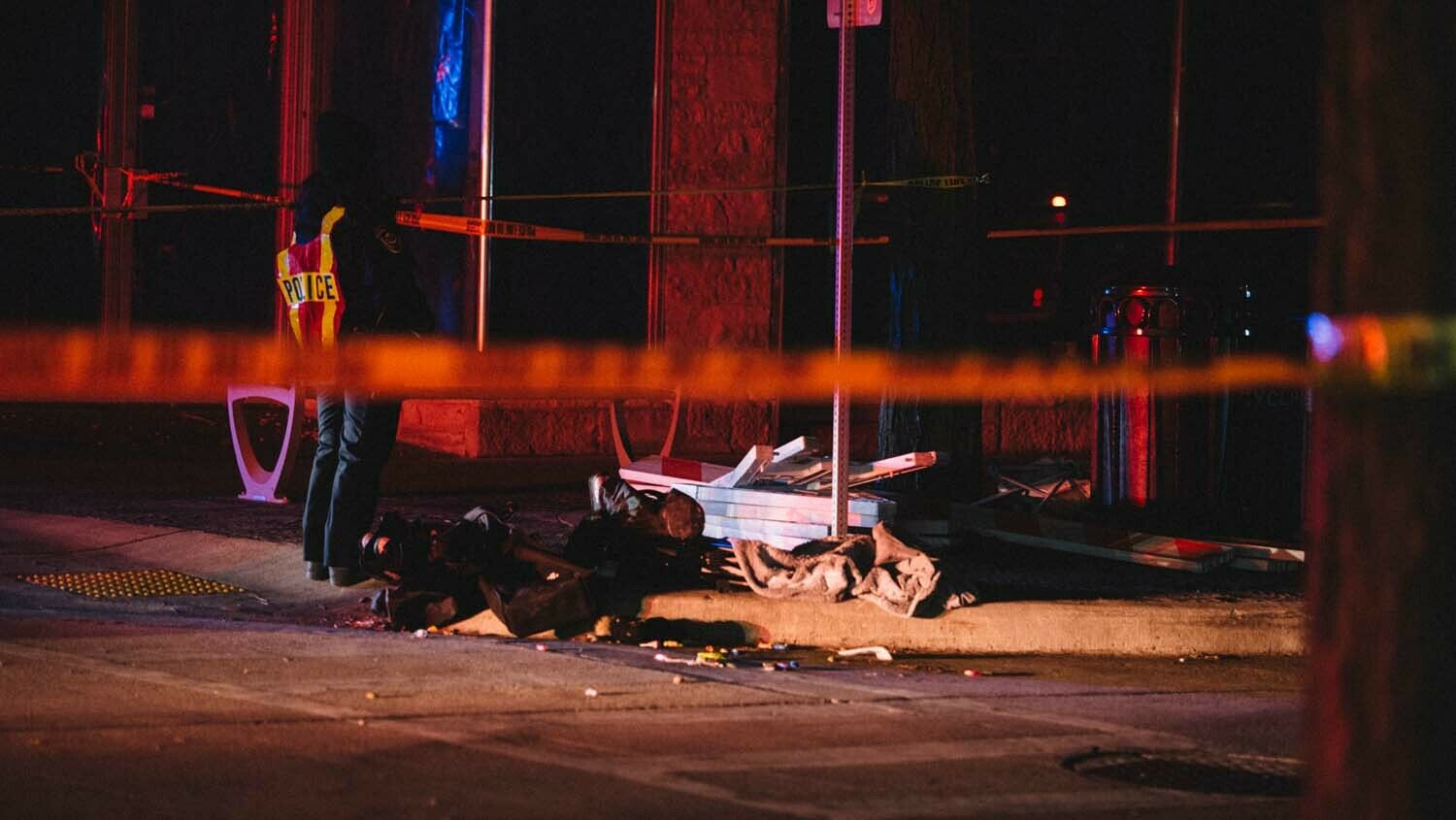 Debris litters the street at the crime scene in Waukesha, Wisconsin, on Nov. 21, 2021.
Jim Vondruska/Getty Images

Why is the media covering up a terrorist attack?

Ever since the Freedom Convoy protest arrived in Ottawa, Ontario, on January 29, the mainstream media and all levels of government have called the protest and its protesters violent, insurrectionists, terrorists, an illegal occupation, a siege, far-right extremists, racists, proxies of Putin, and a fringe minority. Protests have been spreading across Canada in Coutts, Emerson, Windsor, Vancouver and Toronto. But the only violence to take place has been against the protesters.

On February 4, David Zegarac intentionally drove his white Jeep Patriot suv into a group of protesters in front of Manitoba’s provincial legislature. Zegarac hit four people with his vehicle before speeding off, running red lights, and later trying to resist arrest. Miraculously, the four victims received only minor injuries.

VILE: A freedom protester was mowed down by an SUV late last night. Suspect has been arrested. Trudeau vilified these peaceful protests, and now this happens. Shocking. pic.twitter.com/G08LWmExV6

A dash cam caught the entire attack on video. This should be front-page news, but there was virtually a media blackout. ctv News called the incident a “hit and run,” writing: “A 42-year-old man from Headingley, Manitoba, is facing 11 charges in connection with a hit-and-run that injured four people outside the Manitoba Legislature.” There was no acknowledgement of the attack by any politician, Liberal or Conservative. At a time in Canadian history of escalating tensions and deepening divides, why would the government, and the media, not rebuke a violent act?

The attack completely undermines the fabricated narrative of the Freedom Convoy protests. “The man charged in Winnipeg for an attack on a convoy protest is a radical far-left anarchist,” Rebel News reported. “Police, however, are still treating the incident as a hit-and-run, rather than a hate crime.” Zegarac is being charged with four counts of assault with a weapon, two counts of dangerous operation of a conveyance causing bodily harm, two counts of failure to stop after an accident knowing that the driver was reckless, and failing to stop at the scene of an accident times two.

Several news sources have pointed out links with Antifa. “Zegarac was well known as the front man and vocalist of several Antifa punk bands since the early 2000s, most notably Brat Attack,” wrote the New York Post. “He was vocal about his veganism and radical anarchist politics. However, in 2015, record label Rebel Time dropped the group because of multiple accusations of sexual assault and rape against Zegarac. One of his anonymous accusers said she was only 13 when he allegedly groomed her and raped her.” Some of the songs written by Zegarac are full of violence and death threats against Stephen Harper, former prime minister of Canada.

In June 2021 Nathaniel Veltman deliberately killed four members of a Muslim family in London, Ontario, by hitting them with his car. ctv reported at the time, “Police allege that the attack was a planned and premeditated act against Muslims.” Veltman was charged with terrorism. This heinous attack was in the news across Canada for weeks. Prime Minister Justin Trudeau called the attack “brutal, cowardly and brazen.” He said in the House of Commons: “This killing was no accident. This was a terrorist attack.” Trudeau warned of the growing Islamophobia in Canada and vowed to fight the growing threat of right-wing extremism.

What was the prime minister’s reaction to the attack by David Zegarac? Silence. Trudeau did not condemn the attack, or even acknowledge it happened. Instead, he doubled down on labeling the Freedom Convoy protesters illegal occupiers who wave Nazi flags.

This is eerily similar to what happened in the United states in November, when media and Democrats refused to call an attack a hate crime when Darryl Brooks, a radical black criminal, deliberately ran over and killed several people during a parade in Waukesha, Wisconsin. There is the same pattern of corruption in Canada. This hypocrisy is partially what is fueling the widespread rejection of the radical-left elite and mainstream media.

One of the results from the Freedom Convoy movement has been the complete exposing of the radical bias and agenda in Canada’s state-funded media. All of Canada’s legacy media and newspapers have toed the line on Trudeau’s talking points, helping fabricate a completely false narrative meant to undermine the completely legitimate, peaceful protest in Ottawa.

Even before the convoy arrived in Ottawa, Global News said the “far-right protests” could be Canada’s January 6. Canadian Press said they were “preparing for potential violence.” ctv said the truckers were veering into “dangerous territory.” cbc was caught lying about the truckers, using anonymous texts and ascribing their violent words to the convoy. A cbc News broadcast also flouted the conspiracy theory that Russia was behind the convoy. Most of the experts interviewed for these articles are being funded by the Trudeau government.

Far from being violent, crime has actually dropped while the Freedom Convoy has been in Ottawa. The supporters have even been handing out food and money to the homeless, but that fact has been blacked out by the media. Instead, a false story was circulated that the truckers harassed and threatened members of the Shepherd of Good Hope (sgh) soup kitchen in downtown Ottawa. This was widely circulated in the legacy media, but now has been proved false.

Reporter Andy Lee revealed that the sgh have deep financial ties to Justin Trudeau. The Trudeau government gave sgh $10.3 million to build a new housing complex, gave part of the $3 million in bail out money to sgh, gave another $3.7 million in federal funding to the sgh in 2019, besides having a long history of Trudeau support for the organization. Wouldn’t millions of dollars in funding be a good reason to protect Trudeau? Andy Lee has had her account suspended on Twitter for revealing too much of Trudeau’s corruption.

What about the Confederate flags and the Nazi flag at the protest? One individual did appear briefly at the protest with a Nazi flag, but disappeared. True North has done a thorough investigation into the situation and is offering $6,500 to anyone who can identify the individual. Isn’t it convenient for the radical left that someone appeared out of nowhere from a bus stop with a Nazi flag, walked around the fringe areas of the protest, and then left suddenly? The appearance of this flag is the core support for the Trudeau government’s condemnation of the protesters.

There were also two instances of a Confederate flag being flown at the protest. One was on the back of a truck; the other was being carried by a man wearing a full ski mask and sunglasses so he could not be identified, being followed around by a professional photographer. The crowd confronted him and chased him away. Despite these isolated and dubious incidents, the Toronto Star had 48 news stories over the past three weeks that mentioned both incidents.

Interestingly enough, during an anti-protest demonstration organized by a federal employers union, a Communist flag was displayed. Yet there was no condemnation from the media. Several signs were seen at the counterprotests, reading, “Kill the anti-vaxxers.”

Another accusation has been the desecration of the National War Memorial and of the Terry Fox statue. There is a video of one individual dancing on the Memorial, which is indeed distasteful. Protesters placed a Canada flag, Canada hat and a Freedom sign on Terry Fox. The outrage by the media and Justin Trudeau is hypocritical when compared to their silence when the statue of Queen Victoria was torn down and beheaded. The statue of Queen Elizabeth ii, the head of state, was also torn down. Several statues of John A. Macdonald were desecrated and torn down over the summer of 2021. Was there any outrage to actual acts of vandalism and destruction of public property? Winnipeg police announced this week no one would be charged in the destruction of Queen Victoria’s statue.

No charges for those who toppled Queen Victoria statue on Canada Day https://t.co/8lzyn8EJ4S pic.twitter.com/Mbexmr4IP0

Officials removed the first sign put at the Terry Fox statue so someone put up another #cdnpoli pic.twitter.com/qayZlBurw8

The Canadian government has targeted the funding of the Freedom Convoy based upon on the narrative that the convoy is an insurrection by terrorists. GoFundMe refused to release over $10 million due to coordinated pressure from the government that the protest was illegal. The Ontario government issued a freeze on over $8 million raised on GiveSendGo and instructed banks to freeze any accounts where that money is transferred. In 2017, the Trudeau government gave Omar Khadr, a terrorist who killed an American soldier, $10.5 million in a settlement over a lawsuit that Khadr had his human rights violated.

The hypocrisy and corrupt agenda of the radical left and legacy media alliance are being exposed. Hiding the attack in Winnipeg is only the tip of the iceberg. The groundswell of support for the Freedom Convoy, and the push back against Trudeau’s government, is a late reaction to an agenda that has been pursued in Canada for generations.

In America Under Attack, Trumpet editor in chief Gerald Flurry exposes the agenda of the radical left in America being led by Barack Obama. The radical left wants a fundamental transformation of America into a Communist dictatorship. Bible prophecy warns of this attack in the end time. Read the booklet and prove it for yourself!

This same pattern can be seen in the radical-left government across the English-speaking nations, such as the United Kingdom, Canada, Australia and New Zealand. Part of the Communist game plan is to divide society by race, so the Trudeau narrative has branded the protesters as white supremacists. Trumpet executive editor Stephen flurry wrote in the article “The Waukesha Cover-up Has Begun”:

[T]he late Herbert W. Armstrong wrote in 1963, “Make no mistake! This is no light matter to pass over casually! Race war is coming! Racial tensions, passions and hatreds are being deliberately stirred by organized planning. It will explode into mass violence that will stagger the imagination!” …

This Communist attack is manifested differently in Canada, but the Freedom Convoy protests are clearly exposing the Trudeau government’s plan to divide Canadians and fundamentally transform the nation away from a parliamentary democracy. Trudeau is dangerously close to achieving that goal. But the tide is turning against the radical left, and you need to know why it is happening and where it will lead. The answers can only be found in the Holy Bible. Please read America Under Attack to learn more about what the Bible says about this attack.