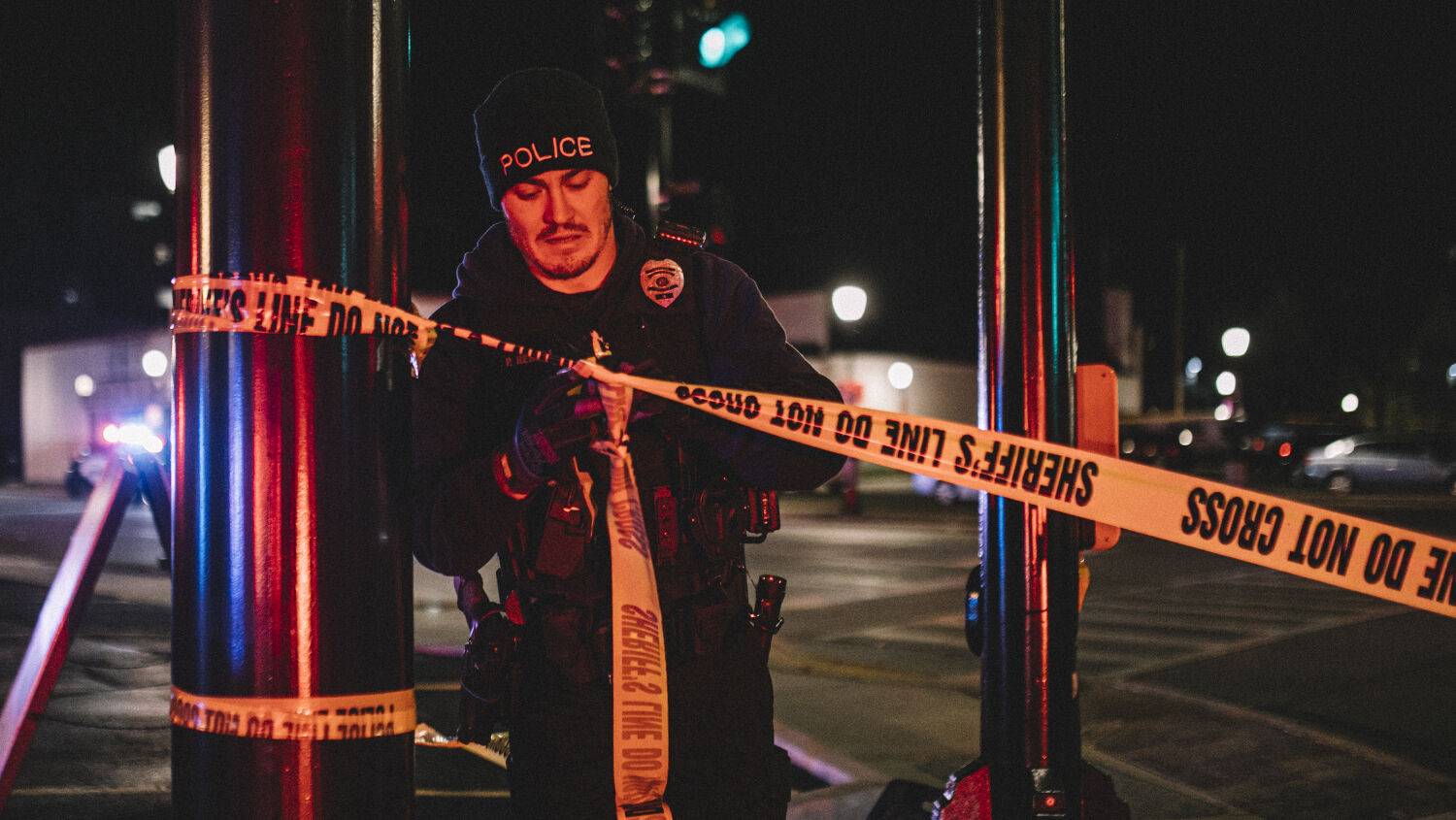 A police officer cordons off a crime scene on November 21 in Waukesha, Wisconsin.
Jim Vondruska/Getty Images

The corporate media is already working to bury the details of Darrell Brooks’s latest crime because it doesn’t fit the narrative that ‘there’s nothing more frightening in America today than an angry white man.’

A deranged lunatic accelerated a red suv through police barricades and into a parade on Sunday afternoon, killing five people and injuring dozens more. This horrific attack occurred in suburban Waukesha, Wisconsin, at the hands of Darrell Brooks, a 39-year-old man who has been charged at least 16 times in the past 22 years with domestic violence, reckless endangerment, illegal possession of a weapon, resisting an officer and other crimes.

But you are not hearing much about this terrifyingly evil act. Why? Is it because Brooks is black? Is it because devoting news coverage to his murders would distract from the propaganda media narrative that “there’s nothing more frightening in America than an angry white man”?

Brooks’s entire attack was witnessed by Milwaukee Journal Sentinel intern Kaylee Staral. Standing on Main Street as the parade took place, she heard screaming. She saw a red vehicle accelerate down the street and straight into a group of people. Terrified spectators fled frantically into storefronts. Staral, along with her mother and stepfather, ran to help the injured. At the scene of the crime, gunshots sounded out as the vehicle continued to move and police attempted to stop it. No one was hurt by the gunfire, and the police were able to apprehend Brooks without incident.

“It looked like dummies being thrown in the air,” said Nicole Schneiter, who was attending the parade with her children and grandchildren. “It took a second to register, like, ‘Is that what we really just saw?’ And then you looked in the road, and there were just people laying in [the] road.”

Brooks had driven over several children and killed four women and one man.

Brooks had been granted a $1,000 cash bail, a shockingly low amount for someone who is a career criminal. He had been out of jail for less than a week and was fleeing the scene of yet another domestic dispute when he barreled through the crowd. Police did not pursue him until after he drove through the Christmas parade. Horrifying videos from the scene show Brooks’s vehicle actually accelerating just before it crashed into spectators, dancers and musicians. Some have speculated that Brooks wanted to kill as many people as possible. Local authorities have not stated what they believe the motive to be.

The Waukesha massacre forces us to ask questions, not just about Brooks but about ourselves and our society. Why was this lunatic with a two-decade-long criminal record even on the street? How did he get out of jail for such a low amount of bail after trying to run over the mother of his child just a few days prior? Why does he still have a driver’s license? What is wrong with our justice system? Why can’t we prevent this?

Darrell Brooks was let out of jail about the time Kyle Rittenhouse was acquitted on all charges in the August 2020 shootings of three men at the Kenosha riots. Yet the corporate media have devoted enormous coverage to commentary on the Rittenhouse case to try to make it an example of racism in the American justice system. The same media executives are choosing to mostly ignore the fact that a black rapper was released from jail on $1,000 bail after trying to run over his ex-girlfriend at a gas station, allowed to drive a car, and able to drive it straight into a parade, ending innocent people’s lives.

This was poor timing for the propaganda media’s agenda. That is why it is being ignored and the agenda is plowing ahead anyway regardless of the facts. Just an hour or two before a black rapper that some leftists might classify as “oppressed” committed this atrocity, cnn posted this headline: “There’s Nothing More Frightening in America Today Than an Angry White Man.” This was cnn’s latest spin on the Rittenhouse case, despite the acquittal, despite the fact that the whole world can see the video online showing each shot Rittenhouse took, and can see that he was being physically attacked in each instance. People were reading the words “There’s Nothing More Frightening in America Today Than an Angry White Man” and John Blake’s 3,000 words classified as an “analysis” when a very different, angry, heartless man did something beyond frightening. People were mulling over Blake’s dramatic final words about how the Rittenhouse trial will produce a “frightening future” of more angry and emboldened white men “[a]nd more dead Americans.” How chilling, you think. What a terrifying picture of America has just been painted, you think. Surely some of this must be true, you think. Then you click over to the home page and find out that murderer Darrell Brooks just produced more dead Americans than all of the people killed in the trials that Blake just finished dramatizing.

But the media executives will make sure you know and care far more about Joseph Rosenbaum, Anthony Huber and Gaige Grosskreutz than Virginia Sorenson (79), LeAnna Owen (71), Tamara Durand (52), Jane Kulich (52) and Wilhelm Hospel (81).

Perhaps you also find out that blacks, who make up 13 percent of the United States population, commit a third of violent crimes in this country. Whether white or black, there’s nothing more frightening in America today than angry, violent, unrepentant, rebellious people—and the elites who ignore the facts, ignore the problems (let alone the root causes), and bulldoze ahead with their sickening agenda.

The Rittenhouse verdict was a top story for the New York Times, yet Waukesha was buried on page A-17 the day after the mass murder of innocents. YouTube, Twitter and Facebook are censoring information about Darrell Brooks so people cannot even do their own research about his race, criminal background and potential motive. Corporate media executives and presenters believe they know what you need to know—and they are bending over backward to bury the details of Brooks’s crimes, which conflict with their narrative that the greatest threat to America is parents at school board meetings, Trump voters and other forms of “white supremacy.”

Despite their efforts, some relevant information about Brooks is leaking out. Conservative journalist Andy Ngo found an old Facebook post from Brooks, saying, “Run them over. Keep traffic flowing and don’t slow down for these idiots.” Brooks is evidently a Black Lives Matter supporter who hates conservatives and who has advocated running people over in the past. The New American reports that Brooks is a Muslim black supremacist.

You would think such information would be relevant in determining the true motive for Brooks’s mass murder atrocity. But the corporate media want this vital information completely blotted out.

It is almost hard to determine what is most frightening in America today: the pedophiles, the wife-beaters, the murderers, the rioters, the looters—or the propagandists who bend these people’s actions and everyone else’s to their agenda of stirring up racial division in America!

In the weeks ahead, expect the corporate media to continue slandering Kyle Rittenhouse and hyping up the threat of white supremacy while covering up Brooks’s crimes. It is like the late Herbert W. Armstrong wrote in 1963, “Make no mistake! This is no light matter to pass over casually! Race war is coming! Racial tensions, passions and hatreds are being deliberately stirred by organized planning. It will explode into mass violence that will stagger the imagination!”

People probably thought that was wildly impossible a few years ago. Not now.

This strategy may sound shocking, yet Mr. Armstrong predicted it decades ago. In his March 1969 Plain Truth personal, he asked, “Why are our people unable to recognize the Communist line—the Communist plan and conspiracy—in college and university riots, in propaganda accusing ‘police brutality,’ in ‘black power,’ ‘black panther’ and other slogans, even in ‘civil disobedience’ and ‘nonviolent’ movements of protest which lead to violence?” Then he answered with this shocking truth: “The guiding hand in student revolt is the Communist Party. Many students, their emotions stirred and enraged to violence, do not themselves realize this. Yet, actually, these young leaders of the ‘New Left’ movement are going beyond the Communist Party. Their plan is to stir up college-age students to revolt first, and the teenage high school adolescents. If they can corrupt and/or win over tomorrow’s students, they will gain control.”

Some of those students Mr. Armstrong wrote about now control the Democratic Party, and they are still using the same racially charged propaganda. Without racial hatreds, real and perceived, they would have no influence or power!

The Bible shows the flames these agitators are fanning will burn down the nation (Isaiah 1:7). This is because there is an evil spirit seeking to destroy America. Even the most strategic race-baiters do not understand it.

If you have never proved where the spiritual motivation of the radicals comes from, request a free copy of America Under Attack, by Gerald Flurry.