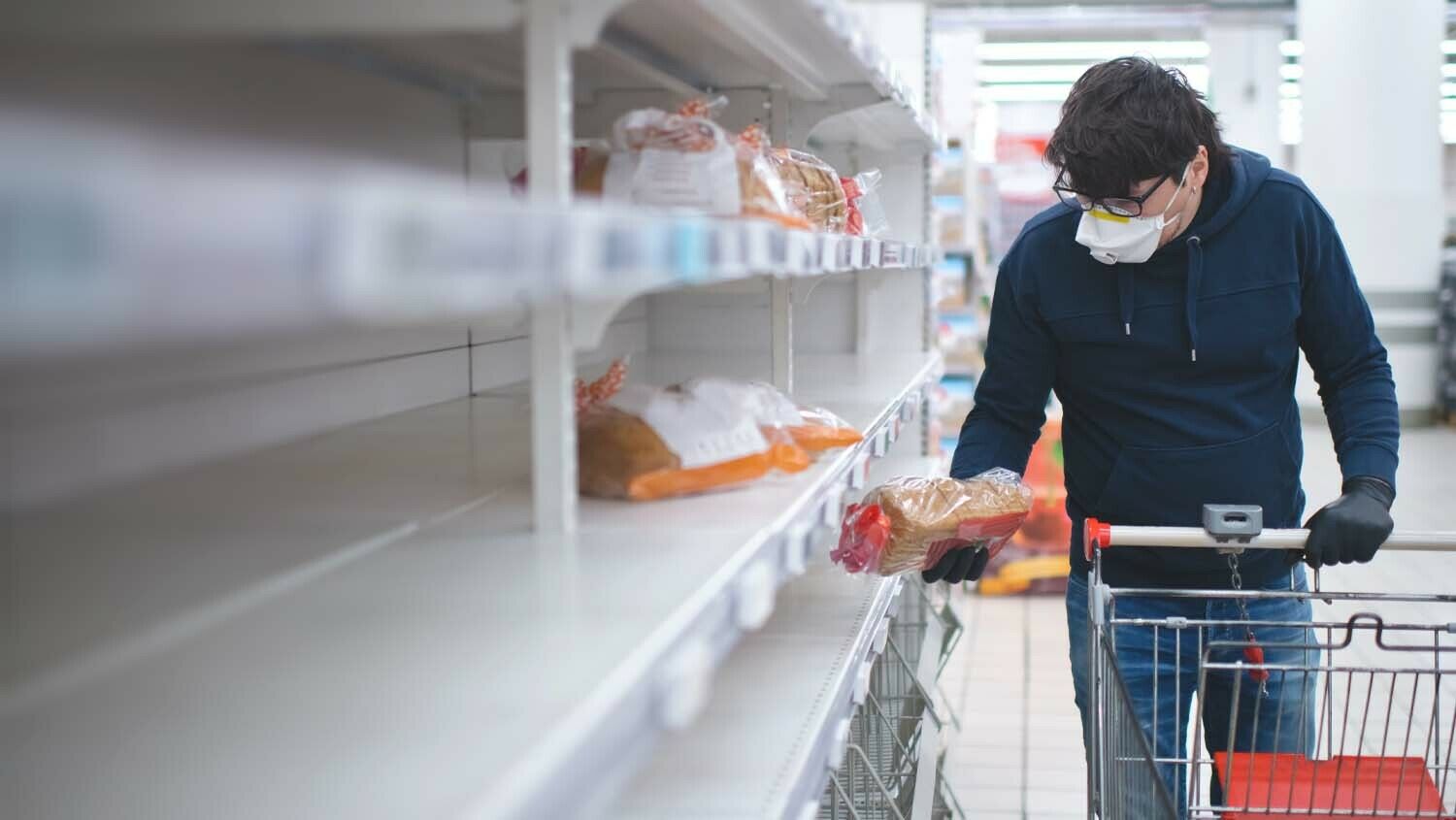 Empty shelves are coming to a supermarket near you.

Over the last few months, shoppers have had to contend with increasingly empty shelves at the supermarket. Necessities such as bread, milk, meat and cleaning products have all been in short supply. Much of the blame has rightly been placed on the supply chain crisis. Clogged ports and covid-19 restrictions are throttling transportation systems. But most experts are telling people not to worry. The problem, they say, is the supply chain and not food production.

In a research paper published by the University of California, two professors said the current situation is worrisome. But they believe that the American food system “is resilient and there is little reason for alarm about long-term food availability amid the coronavirus crisis.”

The United States is the most prosperous nation in the world. Its citizens have enjoyed a level of comfort and opulence that has rarely been seen before. Many believe that this will continue, but there are several serious threats to this prosperity. And one that has flown under the radar is the American food system’s dangerous dependence on fertilizer.

The United States burns through more fertilizer per capita than any other country in the world. And most of it comes from other countries. More than 50 percent of the nitrogen fertilizer critical for American crop production is imported; at least 25 percent comes from Trinidad and Tobago alone.

Natural gas is critical to the production of fertilizer. And with skyrocketing gas prices, fertilizer is becoming more expensive to produce. Thus, some researchers argue that there is plenty of reason for alarm.

“‘Farms Are Failing’ as Fertilizer Prices Drive Up Cost of Food,” the Wall Street Journal published on January 21. Many countries in the developing world are dealing with serious food shortages. A fertilizer crisis would jeopardize the food of 100 million people. But this isn’t a problem for the developing world only. Sen. Roger Marshall recently explained that this directly affects the United States as well.

“It’s no secret farmers are faced with a fertilizer crisis,” he wrote for Agri-pulse. Many fertilizer producers shut down during the pandemic. In addition, China is reducing its fertilizer exports to drive up prices. The increasing demand has led producers outside of Europe and China to drive up their prices even higher.

Phosphorous- and potassium-based fertilizer prices have more than doubled in Kansas. Nitrogen-based fertilizers have quadrupled. As a result, food is becoming more expensive, even in the most prosperous country in the world.

The impact of fertilizer isn’t something the average person thinks about. But it directly affects what you see on the shelves at your local supermarket. “The unfortunate reality is this is only the beginning,” Senator Marshall continued. “It may take more than a year before the effects felt by fertilizer prices at the farm will also be felt at the fork.”

Consider corn. It is the primary feed grain in the U.S., accounting for more than 95 percent of animal feed. It is also used in biscuits, bread, crackers, pretzels, cookies, beer, corn syrup, sweeteners, gas and several other items. A full-blown fertilizer shortage would devastate corn production. Meat production would suffer. As animal husbandry faltered, it would affect milk and wool as well. Food production would drastically drop; gas would become more expensive. So many things that we take for granted would suddenly be unavailable.

But having more fertilizer isn’t the solution either.

The fertilizer problem is an agricultural hydra for the U.S. If the U.S. tries to produce more nitrogen, climate change activists will rear their heads. If the U.S. increases reliance on fertilizer imports from enemies such as Russia, they will have the opportunity to directly threaten American food security. And lastly, the longer America relies on fertilizer, the harder it is to be weaned from fertilizer.

The U.S. has some of the richest soils in the world. But decades of aggressive, commercially driven agriculture have taken their toll. The small, American farmer with an intimate relationship with the land is nearly extinct. The large, corporate farmer who is obsessed with profits is nearly ubiquitous. And they are determined to pump the soil full of fertilizer in order to squeeze the soil for every penny.

In the process, American soils have been depleted of essential nutrients, bacteria and fungi that actually produce more crops. “Our mindset nowadays is that if you don’t put down fertilizer, nothing grows. But that’s just not true, and it never has been,” soil researcher Rick Haney told YaleEnvironment360.

But the system of high intensity, chemical dependent farming has led to dysfunctional soil. It’s created a vicious cycle. Because of all the fertilizer, the soil isn’t “performing as we need it to. We are essentially destroying the functionality of the soil, so that you have to feed it more and more synthetic fertilizers just to keep growing this crop,” Haney said. U.S. farming’s obsession with profits is dangerous. It is punishing the soil by pumping it with fertilizer that prioritizes temporary quantity over quality. It has created a dependence on fertilizer that has destroyed the soil. It doesn’t matter which gives out first—the soil or the fertilizer supply—both roads lead to disaster and total collapse.

In his column earlier this year, Victor Davis Hanson wrote: “In modern times, as in ancient Rome, several nations have suffered a ‘systems collapse.’ The term describes the sudden inability of once-prosperous populations to continue with what had ensured the good life as they knew it. Abruptly, the population cannot buy, or even find, once plentiful necessities. They feel their streets are unsafe. Laws go unenforced or are enforced inequitably. Everyday things stop working.”

This is happening to the United States before our eyes. There are several contributing factors to this collapse, such as creeping communism, racial hatred, rising inflation, as well as an explosion of violence, government corruption and immorality. Throw into the mix the less flashy but equally devastating over-reliance on fertilizer.

Those familiar with the Trumpet will know these are the very events we have forecast for decades. Our forecasts are based on Bible prophecy, which has a lot to say about impending crop failure. “The seed is rotten under their clods, the garners are laid desolate, the barns are broken down; for the corn is withered. How do the beasts groan! the herds of cattle are perplexed, because they have no pasture; yea, the flocks of sheep are made desolate” (Joel 1:17-18). This is a prophecy about the coming calamity of physical destruction of crops, land, produce, soil, pasture and the animals themselves. This is an urgent problem. But it has a simple solution: obedience to God’s law.

“The good news is that soil will come back if you give it a chance. It is very robust and resilient,” said Rick Haney. “It’s not like we have destroyed it to the point where it can’t be fixed. The soil health movement is trying to bring those organic levels back up and get soil to a higher functioning state.”

God’s laws promote soil health. One example is the law of the land Sabbath. In Leviticus 25, God explains a law to let the land lie fallow once every seven years. This law replenishes the soil of natural nutrients, improves fertility, reduces erosion and desertification, and ultimately leads to healthy crop production, bountiful yields and endless prosperity. All of God’s laws have similarly positive and wonderful effects. That is the basis of God’s law: positive effects. That is why God wants man to obey Him. Our ways bring destruction and collapse. His way brings blessings and abundance. God’s world is coming.

In his booklet The Wonderful World Tomorrow—What It Will Be Like, late theologian Herbert W. Armstrong wrote some of the headlines we might see in God’s future world: “‘Rapid Increase in Food Production. All Records Broken for Increased Food Production. Agricultural Authorities Reveal Abolition of Artificial and Synthetic Fertilizers, and Return to Nature’s Laws of Soil Enrichment Resulting Not Only in Bumper Crops, but Vastly Improved Quality and Flavor.’ Well, how are those, for a starter? … We shall never have utopia on Earth until human nature is changed. But, you say— ‘Man can’t change human nature.’ Oh, but God can! And that’s precisely what the living Christ is going to do, when He returns to rule all the nations of the Earth.”