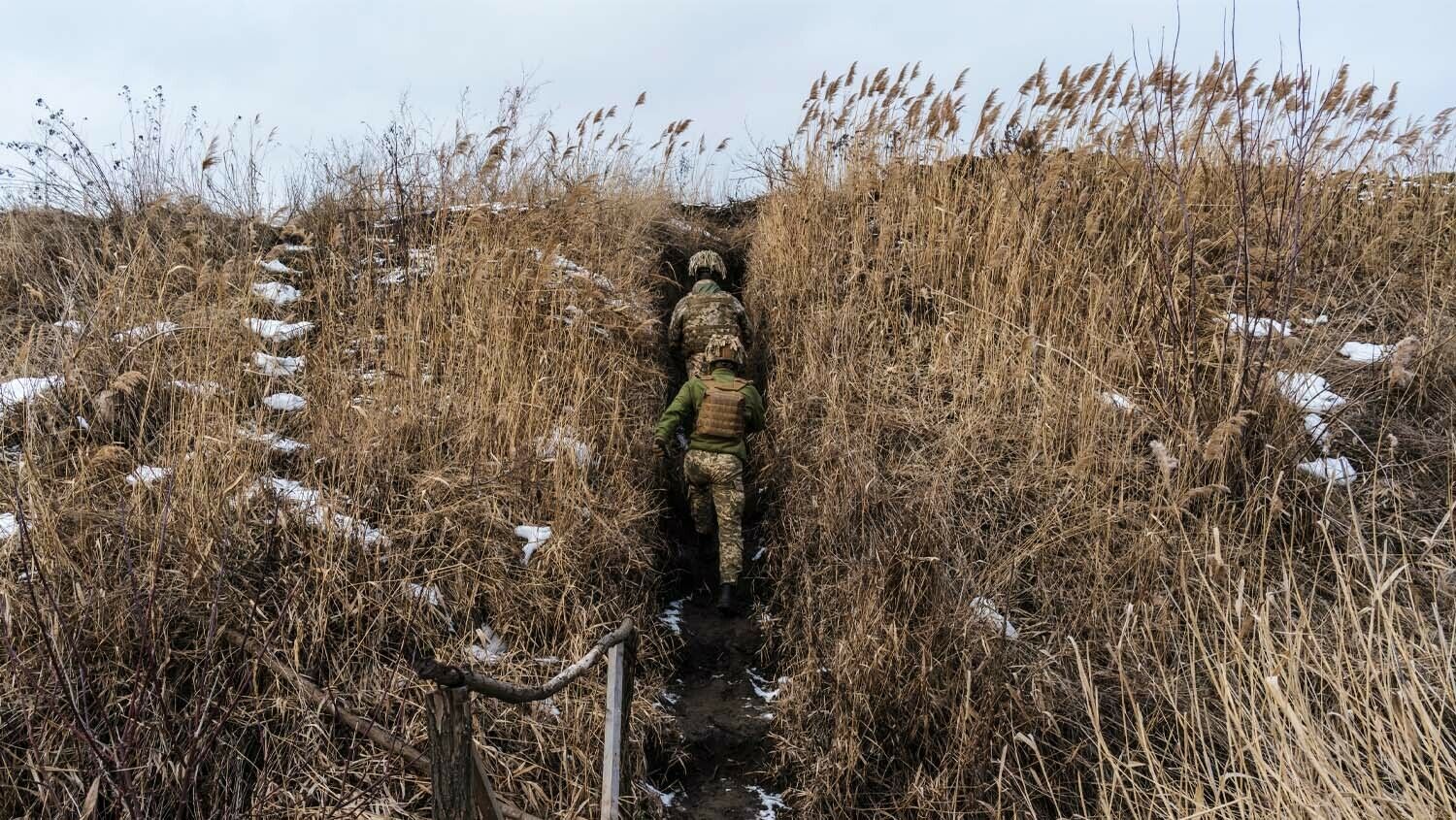 Ukrainian soldiers walk in a trench near the front line on January 17, 2022 in the village of New York, formerly known as Novhorodske, Ukraine.
Brendan Hoffman/Getty Images

Don’t be fooled, Germany is pursuing a calculated strategy.

Ukrainian Deputy Prime Minister Olha Stefanishyna warned in a January 17 interview with Spiegel Online that failure in Ukraine would mean the whole European project would fail. Over the last few decades, nothing has been more important to Germany than forging the European Union. Yet the Ukraine crisis seems to threaten that goal. What is Germany’s strategy?

On January 17, German Foreign Minister Annalena Baerbock visited Kyiv in an attempt to give the impression that Germany is doing everything it can to uphold relations with Ukraine. She left for Russia on January 18. The diplomacy so far has failed. Russia continues to keep around 100,000 troops stationed near Ukraine and is pushing the West and the North Atlantic Treaty Organization to deny Ukraine help. The West appears to be fine leaving Ukraine to fend for itself.

But can the European project survive if its security is threatened at its eastern border? If EU diplomacy fails and it lacks military backing, can it still stand the test of time?

“For us, it is important to see concrete steps toward Ukraine’s nato membership in the next 10 years,” Stefanishyna noted. “We understand the security concerns. But Russia will always be there, and the Kremlin’s aggressive aspirations will increase. It is not just Ukraine that is at stake. If Ukraine fails, Europe fails too” (Trumpet translation throughout). Yet Germany appears to be doing everything it can to allow Ukraine to fall.

“So far, Germany has blocked the procurement of certain defense weapons. I hope that the new German government will change its position. We are under no illusions: In the event of an invasion, Ukraine would fight alone. No foreign soldier will fight for Ukraine against Russia,” Stefanishyna said.

In December, Ukrainian President Volodymyr Zelensky said Berlin “recently prevented us from receiving deliveries of weapons systems for defense within the framework of nato cooperation. Any democratic state that protects itself against aggression must have the right to acquire this type of defensive weaponry.” Since Ukraine is not a nato member, any member state can veto pending arms deliveries requested by the Ukrainian government. Under former German Chancellor Angela Merkel, Germany stopped the United States and Lithuania twice from delivering weapons to Ukraine.

Additionally, while sending soldiers and missile systems to Ukraine, Britain had to avoid German airspace. No weapons, no support—this almost assuredly leaves Russia an open door to invade Ukraine.

For years, German business relations have provided Russia the necessary economic standing for future invasions. The latest example is the Nord Stream 2 pipeline. “It is unacceptable to launch Nord Stream 2 while Russia is putting its feet on the table and threatening the whole world,” Stefanishyna said. “In the current situation, Nord Stream 2 is a trap for Europe. Many Western countries are imposing sanctions on Russia to prevent a war against Ukraine. The money from Nord Stream 2, however, could flow into just such military aggression once the project begins.”

It appears Germany is willing to risk sacrificing Ukraine, and even the success of the European project, to uphold relations with Russia. But there is a greater strategy that Germany is pursuing.

To understand what is going on, you have to understand Germany’s ambition. Right now, Europe isn’t completely united. It relies on nato and thus the United States for protection. Though the groundwork is laid, an independent EU army is still non-existent, largely due to a lack of will.

Historically, the German people are quite familiar with such a lack of unity. In 1850, the project of German unification seemed impossible. But then Otto von Bismarck rose as the nation’s unifier. He exploited the fear of the German people and sought to unite them in war. In the war with Denmark, the Austro-Prussian War, and the Franco-Prussian War, smaller German states rallied behind Prussia to fend off foreign threats. All these bloody conflicts were designed to unify Germany.

Germany has now exerted great effort to unite Europe. Yet the EU won’t unite militarily unless there is an imminent danger. Could German leaders be willing to sacrifice Ukraine as a catalyst toward unity?

Germany has used Russia before to expand its power in World War ii. Trumpet editor in chief Gerald Flurry wrote in November-December 2008: “[D]id you know that Germany and Russia have probably already dealt with their most urgent differences? … I believe that Germany’s leaders may have already agreed to a deal with Russia, a modern Hitler-Stalin pact where Germany and Russia divide countries and assets between themselves. This agreement would allow each to turn its sights on other targets. Any such deal that may have been struck between Germany and Russia is a precursor to war!”

Underneath the surface, Germany is pursuing a secret strategy, as prophesied in the Bible. As the late Herbert W. Armstrong explained in his booklet, Who or What Is the Prophetic Beast?, a beast in the Bible represents an empire or kingdom. Revelation 17:8 warns: “The beast that thou sawest was, and is not; and shall ascend out of the bottomless pit, and go into perdition: and they that dwell on the earth shall wonder, whose names were not written in the book of life from the foundation of the world, when they behold the beast that was, and is not, and yet is.” This beast is referring to the Holy Roman Empire, which is currently working underground, but is about to rise and shock the world in a dramatic way. Germany always has a strategy. The problem is, most don’t recognize that strategy until it is too late.

I encourage you to read “Germany and Russia’s Secret War Against America,” by Mr. Flurry, to learn how Germany actively works to undermine the U.S. and nato. Also watch his Key of David episode “Germany Going Underground” to see how German industrialists continue to work with Russia to pursue the same goals of World War ii. Germany is pursuing an active strategy in the recent crisis. You must know what it is.