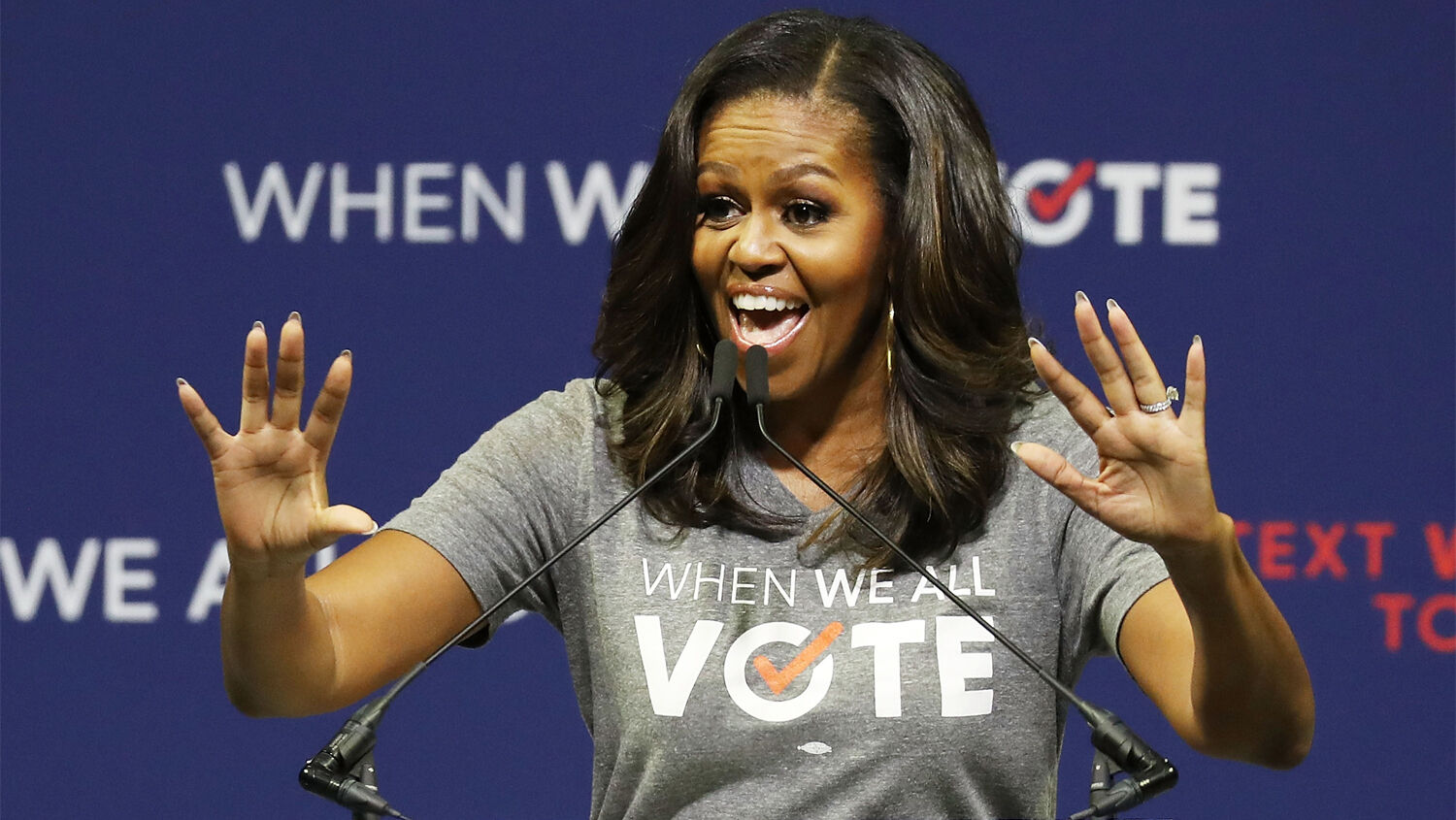 Former First Lady Michelle Obama speaks during a When We All Vote’s National Week of Action rally at the Watsco Center at the University of Miami on Sept. 28, 2018.
Joe Raedle/Getty Images

A plan to steal the 2022 election is in motion.

Former First Lady Michelle Obama plans to register a million new voters before this year’s midterm elections. On Sunday, Obama announced in a statement that the When We All Vote foundation is partnering with 30 other voting organizations to recruit and train 100,000 volunteers to register at least 10 new voters each. But recruiting new Democrats is not all these volunteers will be doing. Obama wants them to contact senators about passing new voting rights legislation and to recruit lawyers to protect voting rights “in the states where the freedom to vote is threatened.”

“We’ve got to vote like the future of our democracy depends on it,” she wrote. “[W]e must give Congress no choice but to act decisively to protect the right to vote and make the ballot box more accessible for everyone. As civic engagement, voting rights, and voter mobilization organizations representing millions of Americans, we are joining together to ensure that Congress acts on voting legislation.”

The groups supporting this initiative include big names like the National Association for the Advancement of Colored People, the Voto Latino Foundation, the League of Women Voters, the National Bar Association, Common Cause, Rock the Vote, and Fight for a Fair Vote.

Obama wants these groups to “do everything they can to pass the Freedom to Vote Act and the John Lewis Voting Rights Advancement Acts.” And the Biden administration is lending its full support. In a speech on January 11, Joe Biden even supported abolishing the Senate filibuster so that congressional lawmakers could pass the Freedom to Vote Act with 50 votes instead of the regular 60 votes.

“The filibuster is not used by Republicans to bring the Senate together but to pull it further apart,” said Biden. “State legislatures can pass anti-voting laws with simple majorities. If they can do that, then the United States Senate should be able to protect voting rights by a simple majority. Today, I’m making it clear: To protect our democracy, I support changing the Senate rules, whichever way they need to be changed to prevent a minority of senators from blocking action on voting rights.”

Yet are the Freedom to Vote Act and the John Lewis Voting Rights Advancement Act needed to protect voting rights? The Freedom to Vote Act is a watered-down version of the rejected For the People Act, which would mandate that states allow every American citizen to vote by mail if they wish to do so. The John Lewis Voting Rights Advancement Act would require certain states to clear changes to their voting laws with the federal government. Joe Biden and Michelle Obama say these changes are necessary because states are passing laws to make voting more secure after an unprecedented expansion of mail-in voting led to allegations of ballot stuffing and other forms of voter fraud.

If Obama and Biden can ram the Freedom to Vote Act and the John Lewis Voting Rights Advancement Act through Congress, Democrats may be able to rig every election for the foreseeable future by flooding the nation with mail-in ballots and accusing anyone who asks for verification of racism.

Dr. Peter Navarro authored a three-part report on fraud in the 2020 presidential election, extensively cataloging how radical Democrats used a two-pronged grand strategy to game the election process across six battleground states. “Prong One of the Democrat strategy dramatically increased the amount of absentee and mail-in ballots,” he wrote in his report. “Prong Two dramatically decreased the level of scrutiny of such ballots. This resulted in a flood of potentially illegal ballots into the battleground states more than sufficient to tip the scales from a decisive legal win by President Trump to a narrow and potentially illegitimate alleged ‘victory’ by Joe Biden” (emphasis added).

Yet neither Michelle Obama nor Joe Biden is the architect of the Democrat’s two-pronged strategy. Michelle is not interested in the daily grind of politics, and Biden is almost senile. Instead, Michelle’s husband and Biden’s boss is responsible for destroying U.S. voter security.

“Barack Obama was at the epicenter of the election crisis and the radical left’s effort to prevent Donald Trump from being reelected,” wrote Trumpet editor in chief Gerald Flurry in “Barack Obama in Bible Prophecy.” “The United States entered its greatest political crisis ever on Nov. 3, 2020, Election Day. To make Joe Biden president, the radical left flagrantly manipulated the nation’s voting system. Then for weeks, the mainstream media, at least half the public, most of the nation’s politicians (Democrats and Republicans), and much of the rest of the world believed Mr. Biden had been legitimately elected president. But it was a giant lie. Mountains of evidence proved that this election was manipulated.”

Later in his article, Mr. Flurry quoted a prophecy in 2 Kings 14:26, which says, “For the Everliving pitied the immeasurable miseries of Israel both without and within, when there was no ease for Israel” (Ferrar Fenton translation). This prophecy is about an evil political figure who inflicted “immeasurable miseries” on the end-time Israelite nations of America, Britain and Judah. As the most biblically hostile president in American history, Barack Obama fulfills this role. He relied on his charisma to win a landslide election in 2008 and then went about surreptitiously dismantling America’s electoral structures to the point when the only vote that counts is his vote.

The passage of the Freedom to Vote Act and the John Lewis Voting Rights Advancement Act would cement Barack Obama’s 14-year quest to fundamentally transform America’s constitutional system of government. It will take a series of mighty miracles to restore America’s voting infrastructure to the point where it can ever be trusted again. Yet a prophecy in 2 Kings 14:27-28 indicates God will do just that: “The Everliving had not yet decided to blot the name of Israel from beneath the heavens, therefore He rescued it by the hand of Jerabam-ben-Joash. For the other affairs of Jerabam, and all that he did, how he warred, and how he recaptured Damascus and Khamath of Judah to Israel, they are recorded in the history of events of the days of the kings of Israel” (Ferrar Fenton). Mr. Flurry identified Donald Trump as an end-time type of King Jeroboam ii, showing that God plans to rescue America from its “immeasurable miseries” using President Trump.

People like Barack and Michelle Obama, Joe Biden, Mark Zuckerberg and Eric Coomer will do everything they can to prevent the next election from being fair. So keep watching for shocking developments to unfold in the lead-up to the 2022 and 2024 U.S. elections. The Bible shows that President Trump must return to office for God’s warning message to progress to the next stage. For information on this next stage, please request our free booklets Great Again and The Lion Has Roared.