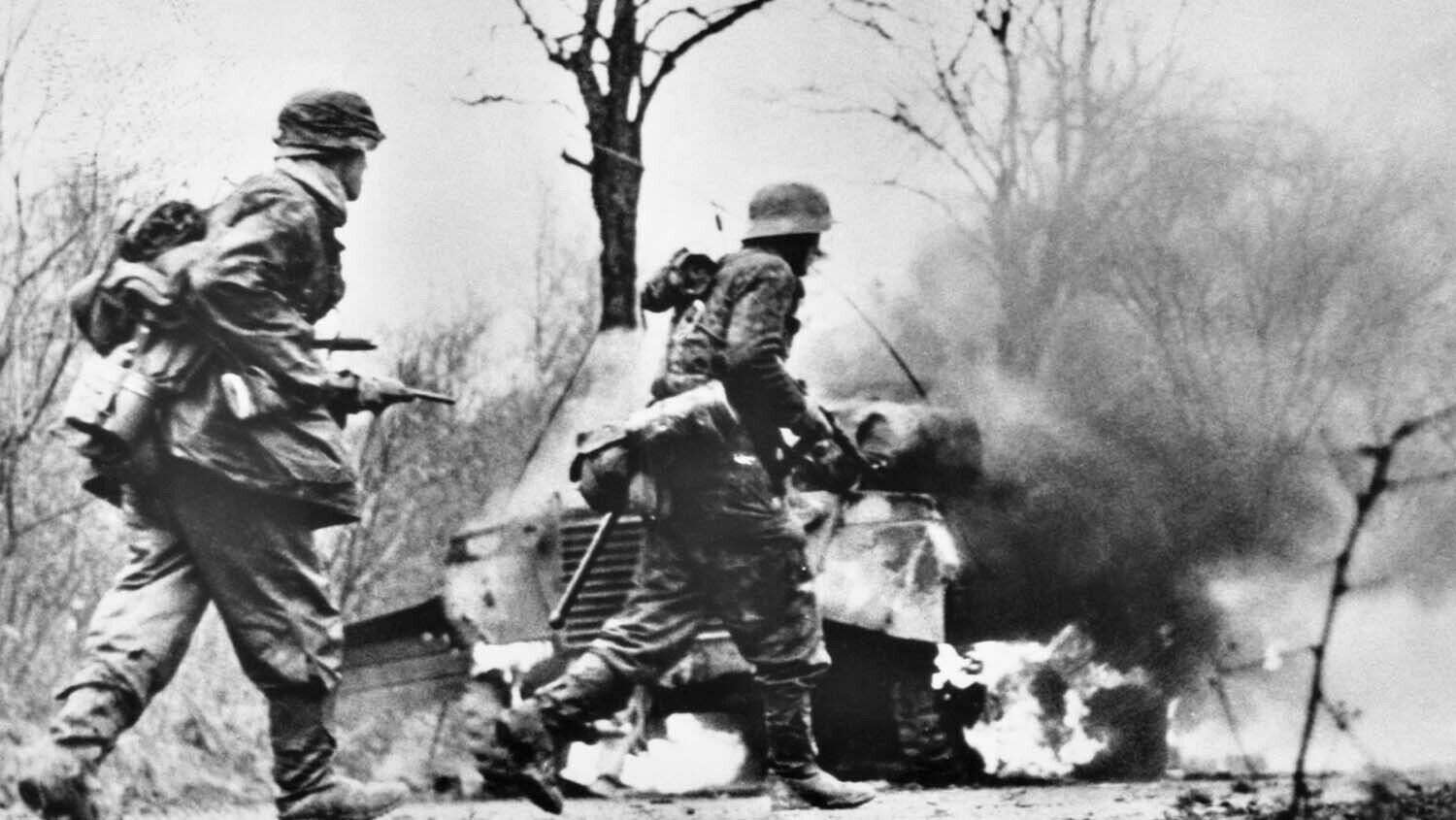 Two German foot soldiers pass by a burning tank during the Battle of the Bulge.
CORBIS/Corbis/Getty Images

Lessons from victory in a winter of misery and death

For weeks, the surprise German offensive through the Ardennes Forest had pushed the American forces back and formed a wedge in the Allied lines. The Wehrmacht was attempting to separate the American and British armies and capture the strategic port of Antwerp. The 101st Airborne Division at Bastogne, and the other American troops holding the front line, had resisted tenaciously against the German attack.

Newman was seeking a punchy way to describe the situation. Looking at Patton’s map, he coined the phrase “Battle of the Bulge.” pic.twitter.com/AR1YpjEKvb

Brig. Gen. Anthony McAuliffe, commanding officer of the 101st, met the request with anger and simply replied: “To the German commander: NUTS!” That one small word has come to define the defiance and tenacity demonstrated at the Battle of the Bulge. This history is an essential component of the American esprit de corps.

John S.D. Eisenhower wrote in The Bitter Woods: “The Ardennes campaign of 1944–1945 was only one in a series of difficult engagements in the battle for Europe. Nevertheless, it can be said that the Ardennes campaign epitomized them all. For it was here that American and German combat soldiers met in the decisive struggle that broke the back of the Nazi war machine.”

January 25 is the 77th anniversary of the end of the Battle of the Bulge. It was victory won through perseverance, toughness and courage. The comparison with modern American society today not only illustrates important lessons, but illuminates Bible prophecy.

The Ardennes Forest is a region of tall, graceful conifer trees sprawling over rolling hills in Belgium, Luxembourg, France and Germany. The tightly packed trees, swiftly flowing rivers and steep terrain make it a hauntingly beautiful but sparsely populated environment. In the winter of 1944, it was thought this formed an impenetrable barrier, and Supreme Cmdr. Dwight Eisenhower left it lightly defended while trying to cover 400 miles of the Western Front.

On Dec. 16, 1944, 30 German divisions attacked the four battle-exhausted American divisions holding the Ardennes frontline. The 1,000 German tanks in the assault were able to break through and form a “bulge” in the Allied line. The American G.I.s dug foxholes into the frozen earth and faced a tremendous onslaught of artillery, armor and determined Germans—all in the extreme cold.

“The miserable fall weather gave way to the record-cold winter of 1944–1945,” writes Peter Kindsvatter in American Soldiers. “Men with frostbite and pneumonia joined with those suffering from immersion foot in the sick-call lines. The G.I.s did some of their fiercest fighting that winter, notably during the Battle of the Bulge in the Ardennes region. In the bitter-cold nights, falling asleep for too long, without moving about or stamping to keep the circulation going, meant serious frostbite. One man in Lt. Harold P. Leinbaugh’s company fell asleep in his hole. When he was discovered in the morning, ‘both his hands and his feet were frozen. His boots had split, there was ice between his toes, and the skin on his hands was burst open.’”

The only path forward was a determined endurance through the bitter cold, on top of surviving the vicissitudes of battle. While most of the G.I.s were young men, they were ordinary people. “None of us were heroes,” recalled G.I. Fred Olson. “We were just there and trying to do the best we knew how under the circumstances. Maybe some days not doing a very good job of it. But as miserable an existence as it was, I felt very strong about it … do the best I could.”

These ordinary men rose to the occasion and displayed the integrity of backbone and a strength of character that is lacking in America today. They may not have considered themselves heroes, but in every decision to fight and not flee, these men made their contribution to victory. “That war turns upon a man, and not upon men, is hardly an original observation, but is generally applied to the head of state, or the commander at the stratospheric level,” wrote Capt. Charles Cawthon in Other Clay. “I found it equally applicable at the platoon and company level. There was no successful action of the 2nd Battalion that was not made possible by one or two souls who burned for the moment at a white-hot flame.”

The American line never broke, but there was severe combat. The Germans knew this was their last chance to slow the Allied offensive, and they fought with desperation. “The worst battlefield atrocities on the Western Front occurred during the Battle of the Bulge in 1944, notably the slaughter of American prisoners of war by SS troops near the town of Malmedy,” writes Kindsvatter. “These executions enraged the G.I.s against the SS troops.

Harold P. Leinbaugh wrote that “the Germans had committed their worst mistake of the war on the Western Front. We had fought by the rules of a sort. In the heat of battle, prisoners were sometimes killed. We knew that. But this was mass murder, and the SS was going to have to pay and pay heavily.”

Gen. George Patton’s 3rd Army was sent north in order to help stop the German advance. On December 25, the sky cleared, allowing Allied airpower to intervene. On December 26, the 3rd Army relieved the weary troops at Bastogne. American forces attacked the flanks of the German bulge in the line and, by the end of January, were able to completely defeat this attempt to prolong the war. According to History.com, “some 500,000 Americans fought in the Battle of the Bulge, with approximately 19,000 soldiers killed in action, 47,500 wounded and 23,000-plus missing. About 100,000 Germans were killed, wounded or captured.”

Who deserves credit for the victory? The brave men certainly did their part. But really the glory and the credit should go to God.

In The United States and Britain in Prophecy, the late Herbert W. Armstrong explained that Micah 5:8 says the end-time Israelites, peoples who include the United States, would be like a lion among the nations of the Earth. The Bible prophesied that America would have victories over its enemies, but after World War ii, there was a turning point. God actually began to curse American military endeavors.

Yet, in this detailed prophecy, God says: “And it shall come to pass in that day, saith the Lord, that I will cut off thy horses” [“war-horses,” Moffatt translation]—tanks, ships, rockets—“out of the midst of thee, and I will destroy thy chariots: And I will cut off the cities [by hydrogen bombs?] of thy land, and throw down all thy strong holds” (verses 10-11).

How plain can you get? Here God identifies the great peoples of the Earth who are the most wealthy and beneficent, the most powerful—yet at the very time their power reaches its zenith, He suddenly “breaks” the pride of their power (see Leviticus 26:19), cuts off their implements of war, and destroys their cities! Why?

Because, as the prophet continues to explain, we have too much “witchcraft” and too many “soothsayers”—false ministers—in our lands who refuse to preach with authority the commandments and ways of the living God!

Military defeat is the result of disobedience to God’s laws. The many Bible prophecies of American military failure can be combined with the prophecies of the decline of masculinity. There is a direct connection. Isaiah 3:1-5 warn that God would take away “the mighty man, and the man of war” and replace those leaders with women and children. Our society would become timid and faint of heart (Leviticus 26:36-37) and would retreat when no one pursues. The disastrous withdrawal of Afghanistan last year is a clear example.

The greatest warrior in the Bible, King David, told his son Solomon that there is a connection between obedience to God’s laws and successful manhood. Trumpet editor in chief Gerald Flurry writes in The Former Prophets:

David told Solomon to walk in God’s ways, His commandments, statutes, judgments and testimonies. Do this, he said, and you will prosper in all that you do. … Show yourself a man and keep the commandments of God! Then God will take you to the pinnacle of success! …

This is how to show yourself a real man. If you men want to be masculine, this is how to do it — for real, not a phony, Hollywood-type manliness. This is where our young men will get their masculinity.

This is why there has been an epic collapse of masculinity in America. The American military today may still have strong and brave men, but the society they come from is completely emasculated.

British Prime Minister Winston Churchill declared that the Battle of the Bulge was “the greatest American battle of the war and will … be regarded as an ever famous American victory.” The Battle of the Bulge reminds us of a time when God was still blessing America on the battlefield. This history can inspire us to have the greatest-ever victories in our lives. Success will come when we burn with a white-hot flame to obey God’s laws. To help you in this noble endeavor, please read our free books Biblical Manhood and The United States and Britain in Prophecy.