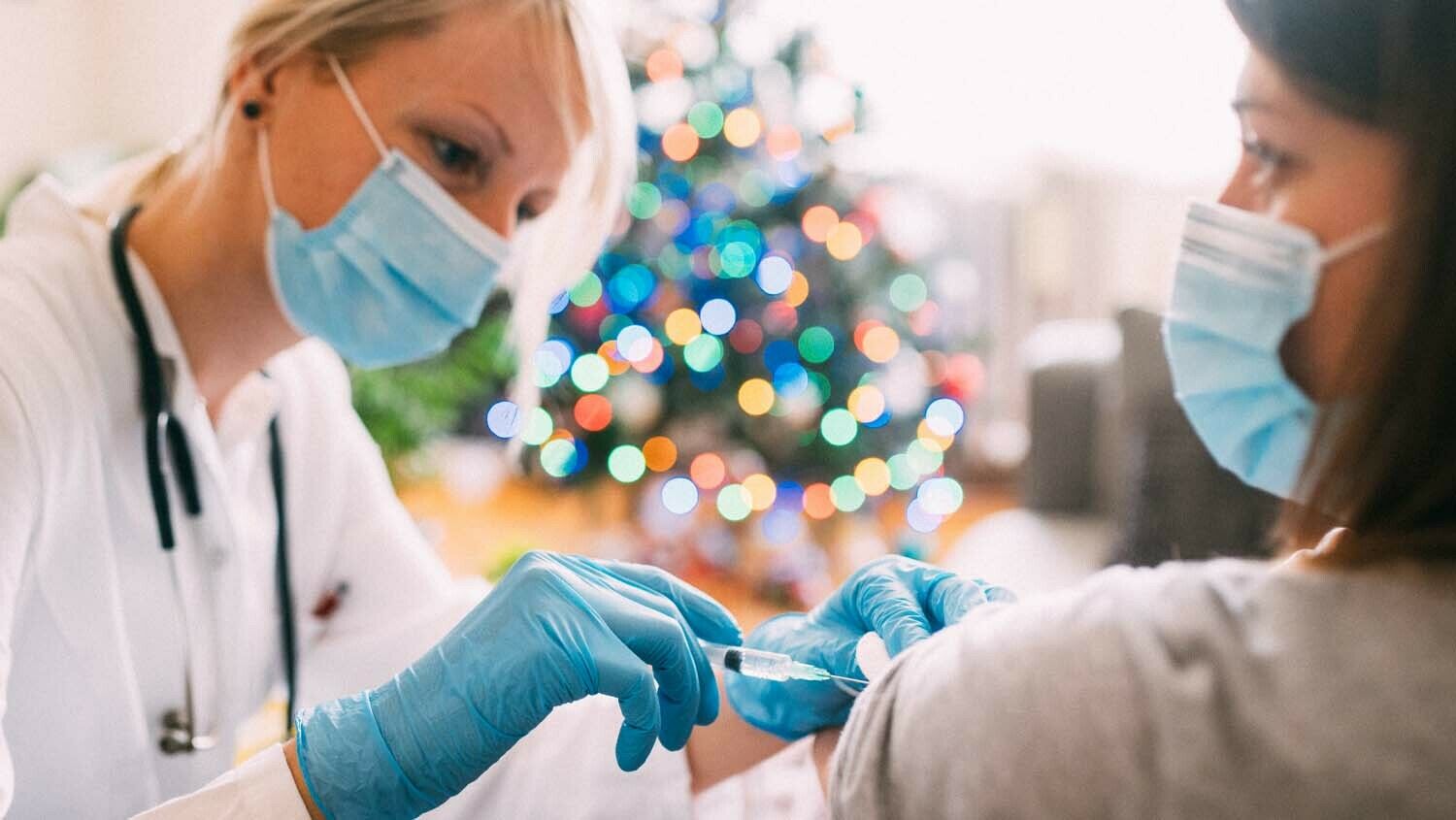 After two turbulent, COVID-infected years, many are looking to Christmas as an anesthetic. But the truth is, this holiday is more a poison than a painkiller.

“This one is a special year. Everything’s different,” Lucy Vallana, a 34-year-old health insurance benefit specialist, told Fast Company last year. “Everyone’s cooped up in their house. I figured Christmas is my favorite time of the year. I might as well splurge. … I’ve gone crazy this year, and I’ve just embraced it.”

One year and three jabs later, covid-19 is still here. According to the Telegraph, you can still make Christmas work for you, “assuming you’ve a bit of cash to spend and you’re triple-jabbed,” of course. But the doomsday messengers are hard at work.

The Daily Mail wrote that 2 million Britons could be forced to self-isolate by Christmas Eve. There are loud calls for Premier League games to be canceled. Good Morning Britain, which continued airing even at the height of the pandemic, is going on a “shock” Christmas hiatus due to omicron. In New York City, where positive covid tests have jumped from 3.9 percent to 7.8 percent over just three days, Broadway shows are being canceled.

These are just a handful of examples of how Christmas 2021 is being canceled.

But despite all the scaremongering, people aren’t reacting as they did in the early days of the coronavirus. “We’ve all seen this horror movie before, and when you’ve watched the killer jump out brandishing a weapon 10 times—even when you’ve watched him kill—it just doesn’t freak you out the same way,” Adam Grant wrote for the New York Times. In fact, covid has brandished its weapon 100,000 times and only managed to kill 0.015 percent of the time. People are realizing that the reports about this killer are exaggerated. They’re realizing that they don’t have to adhere to the scaremongering.

“We’re now starting year three of this. You can’t make this up—this is a sick, sick situation,” Dr. Roger McIntyre told the National Post. “The notion that people should just be told to stay home, I would have thought we would have learned a bit more by now,” he continued. “I think people are fed up; I think people have had enough.”

This year’s Christmas is against the backdrop of coronavirus, unconstitutional mandates and lockdowns, ineffectiveness of man’s rule, the Afghanistan failure, China’s rise, Europe on the cusp of radical change, increased racial tensions, and even a stolen election. As a result, many people are embracing Christmas more than ever. Many people see Christmas as an anesthetic.

And so, despite inflation resulting in costlier gifts, and covid-19 impacting salaries and spending, 2021 is on track to be the most expensive Christmas on record. Here are some statistics:

Despite all the mitigating factors, Christmas spending is more prevalent than ever. According to the National Retail Federation, about 41 percent of American shoppers plan on going into debt for their Christmas shopping this holiday season; 60 percent of the respondents said they would willingly add to the debt they already have; 45 percent said it’s to make themselves happy.

The last two years have been some of the worst on record, and millions of people are rightfully disillusioned with the government and media tactics. But is Christmas the solution?

Many who observe Christmas readily admit that it is rooted in pagan origins. They know that the Christmas tree, Santa Claus, the mistletoe and even the gift-giving exercise are all pagan (for detailed proof, request our free booklet The Truth About Christmas). But many argue that this doesn’t matter because they are observing it for the “right reasons.”

But what does God say?

“[T]he customs of the people are false. A tree from the forest is cut down, and worked with an axe by the hands of a craftsman. Men deck it with silver and gold; they fasten it with hammer and nails so that it cannot move” (Jeremiah 10:3-4; Revised Standard Version). This description of a Christmas tree was written over 500 years before Jesus Christ was born. Other translations of the word “axe” specifically refer to a carving tool. This is all about idol worship. These were the customs of the heathen, and Jeremiah says they are “false,” vain and empty.

He later describes how these heathen practices revolved around “the work of the craftsman,” “the hands of the goldsmith,” and “all the work of skilled men” (verse 9; rsv). Christmas today is all about the newest gadget or material possession; the statistics about Christmas spending and debt attest to this fact.

After describing these heathen practices, Jeremiah writes: “Forasmuch as there is none like unto thee, O Lord; thou art great, and thy name is great in might. Who would not fear thee, O King of nations? for to thee doth it appertain: forasmuch as among all the wise men of the nations, and in all their kingdoms, there is none like unto thee” (verses 6-7). Jeremiah isn’t introducing an unrelated subject; God’s greatness is connected to this truth.

In his Key of David episode “Hidden Danger in Keeping Christmas?” Trumpet editor in chief Gerald Flurry said that in this passage, “Jeremiah is explaining the people are distracted away from … the might of God. The little baby Jesus is not exactly a picture of might, is it? Power? Authority? No, it doesn’t picture that. … Jeremiah is saying those traditions cause you to move away from an absolutely essential understanding of the great, living, powerful Almighty God! … Such power God has! And in those traditions, you don’t get that! You don’t have that pictured. And we cannot function without the power of God! We can’t survive without it very long usually.”

Christmas is a distraction. It’s rooted in paganism and rebellion against God. And its customs serve to distract mankind from God and His awesome power.

People should be looking to God for answers and solutions. Instead, they are distracted by Christmas trees, Santa, decorations, gifts (they can’t afford), and damaging materialism.

The Apostle Paul warned that in the last days men would be “lovers of pleasures more than lovers of God” (2 Timothy 3:4). This accurately describes our materialistic society. Those who view Christmas as a secular holiday are so focused on material goods that they disregard the fact that they are racking up thousands of dollars in debt, year on year. Those who observe Christmas as a religious holiday focus on the baby Jesus and fail to look to the God of power. Both groups are distracted from the powerful God Jeremiah calls attention to. Both groups are unaware of what God says about how He wants to be worshiped.

Our booklet The Truth About Christmas states:

Few, it seems, ever stop to consider what God thinks about these humanly devised traditions.

Throughout the Bible, God plainly reveals that He will not accept vain worship, even if it is intended to be in His honor! …

Today, the spirit of Christmas is one of get. No one asks, “What did you give for Christmas this year?”—but rather, “What did you get?” God’s way, in contrast to Satan’s way, is one of giving to others. That way of life actually brings more joy and blessings (Acts 20:35).

Most importantly, the observation of pagan holidays like Christmas obscures something more wonderful: God’s holy days.

The exact date of Christ’s birth is unknown and had it been important, Christ would have commanded it be celebrated—but He did not! We have no record in the Bible of either Himself, His apostles or His Church ever celebrating His birthday. But God does command us to memorialize the date of Jesus Christ’s death (1 Corinthians 11:24-27)—not His birth. That alone shows that God’s focus on Jesus Christ is a lot different from the focus of modern Christianity!

Did you ever wonder why we observe one day above others, and on an annual basis? Christmas-keepers didn’t invent the idea, nor did the ancient pagans from which several modern holidays came. God is the one who created special days to set apart: holy days.

God’s true holy days teach us how to worship God properly. They are free of materialism, pagan origins, crippling debt and falsehoods. They are not about temporarily ignoring the problems that grow worse and worse each day. They are about the powerful God who is going to solve all mankind’s problems, His master plan to replace oppressive governments of man, and the hope of the powerful, living Jesus Christ who is about to return to this Earth in power and authority, ending all disease, poverty and suffering.

“There is this hidden danger in Christmas: that we get distracted in these traditions, these pagan traditions, away from the great and the powerful God, and we lose His perspective,” Mr. Flurry said in that Key of David program. “What does He say? … Does anything matter but what God thinks and what God says? [W]e need the power of God to solve our problems! And He says He will solve them for us! And He’s even going to protect His own people from what’s coming in these terrible end times. He says He will protect those who do His Work and give their lives to Him and dedicate themselves to Him.”

Flee from Christmas and its pagan customs and traditions. Flee materialism. This world is dying. The world thinks Christmas is an anesthetic, but it’s really a poison. Follow the powerful God; obey His holy days that are all about the way of give. Follow His righteous law. If you put Him first in your life, He will solve all your problems permanently.