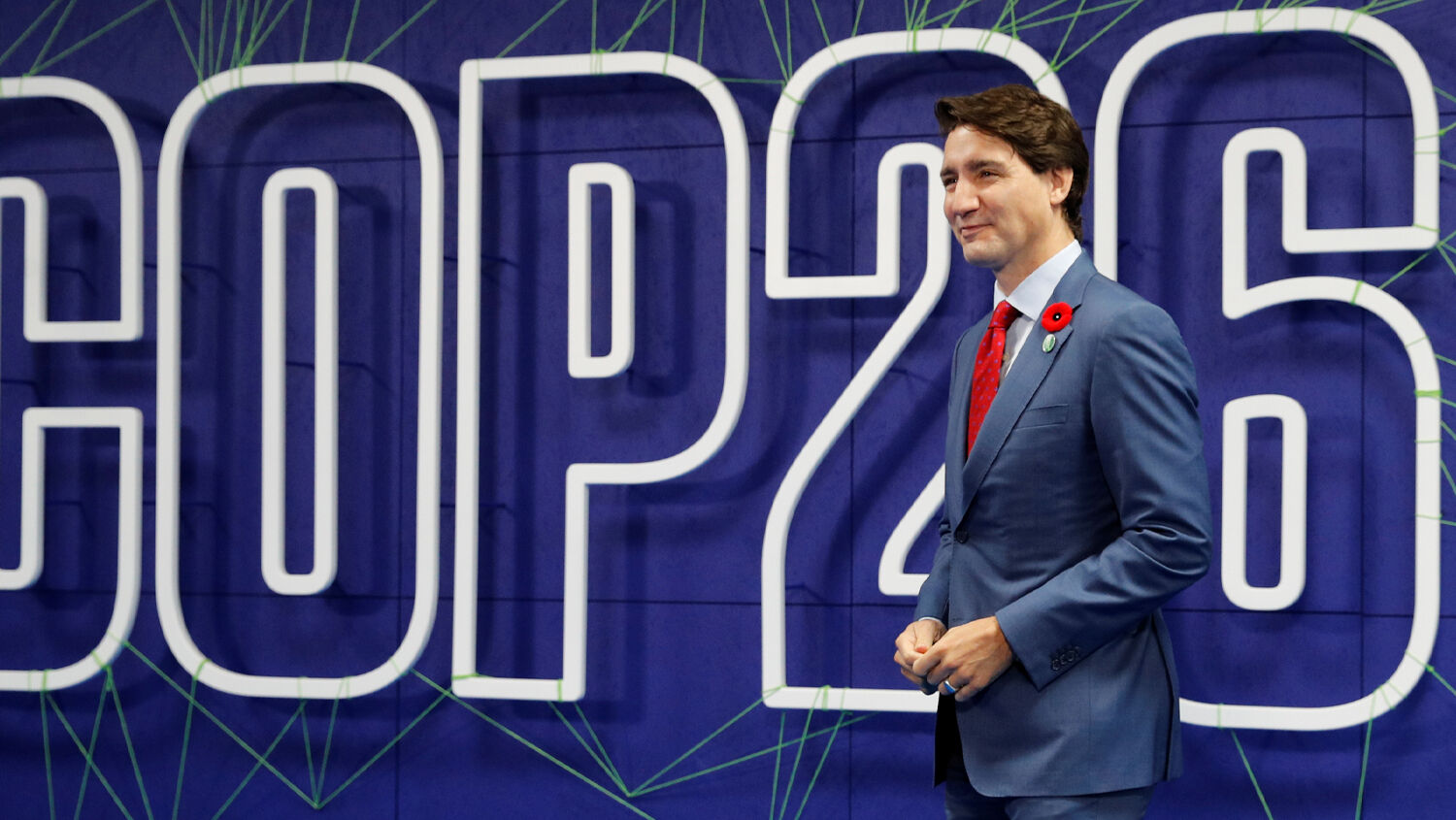 The beginning of the next manufactured crisis

Canada had the largest delegation at the Glasgow cop26 Climate Conference. According to the Western Standard, 227 bureaucrats accompanied Prime Minister Justin Trudeau and Minister of Environment and Climate Change Steven Guilbeault to the conference. That total does not include Trudeau’s “official photographer, official videographer and lead speechwriter, 17 press secretaries and communications directors, four cbc reporters and the entire Green Party caucus.”

The message was clear: Trudeau wants Canada to be viewed as a leader in the global effort to combat climate change.

Canada’s climate policy is now in the hands of radical climate activist Steven Guilbeault. Guilbeault was heavily influenced by his uncle who worked as a missionary in Haiti. It was this influence that compelled Guilbeault to change his university studies to international morality and liberation theology in 1989.

Liberation theology is a movement inside the Catholic Church that originated in Latin America and championed by Dominican Gustavo Guiterrez. It is a mixture of the Catholic method of caring for the poor and Marxism. U.S. Catholic explains: “Some strains of liberation theology used Marxist economic theory, applying it to the gospel. In this interpretation, Jesus becomes the ‘liberator’ and always is firmly on the side of the poorest of the poor.” Liberation theology “often calls for reorganization of social, governmental, and economic structures.” In other words, it attempts to give God’s blessing to the mission to fundamentally change societies.

Guilbeault befriended a number of students, who have all become prominent activists, while at the University of Montreal. Guilbeault’s most notable moment came when he staged a protest at the CN Tower in Toronto. “In 2001, while working for Greenpeace, Guilbeault and another activist climbed 340 meters up the side of the tower and unfurled a banner that read ‘Canada and Bush Climate Killers,’” wrote the National Post. “It was intended to put pressure on the federal government to ratify the Kyoto Protocol.”

When the police arrested him and the other activist, they first congratulated the duo on the daring exploit. But Guilbeault himself has said: “But to me, civil disobedience was never a goal in and of itself. It was just a tool. And now I’m using different tools.” At cop26, Guilbeault and Trudeau made it clear how radical of tools they are using to accomplish their mission.

While at the conference, Guilbeault announced that the Canadian government would join 21 other nations and stop all new public finance of coal, oil and gas by the end of 2022. ctv News reported: “Oil Change International, a group that monitors fossil fuel financing, says an average of about $78 billion a year flows to such projects. It estimates Thursday’s deal could affect about $22 billion of that.”

Other promises included selling only non-combustible engine vehicles in Canada by 2035, and to have a net zero economy by 2050. This includes a promise to have the oil and gas sector have zero pollution in 2050 (which means those industries won’t exist anymore). Trudeau also announced banning all thermal coal exports by 2030, and phasing out coal-fired electricity within Canada by 2030.

Phasing out coal for electricity would have a massive impact on the Atlantic provinces since coal supplies 50 percent of their electricity. Overall in Canada it is only 6 percent of electricity production. The cost of replacing coal with green technologies would cost between $16.8 and $33.7 billion per year.

The government has not released any detailed information on how it expects to accomplish these goals or how it will affect the economy. “Whole sectors of Canada’s economy will ‘shrink significantly’ under climate change programs, the deputy governor of the Bank of Canada said yesterday. Toni Gravelle predicted ‘sharp declines; but made no estimate of lost jobs: ‘It might generate market losses,’” according to Blacklock’s Reporter.

The fossil fuels sector makes up 10 percent of Canadian gross domestic product, and employs nearly 1 million people directly and through related industries. Energy exports made up 17 percent of the total, valued at $71.4 billion in 2017. Canada is the fourth largest producer of crude oil in the world, exporting 99 percent of that oil to the United States (3.7 million barrels per day). However, Canada also imports more than 660,000 barrels of oil per day from the United States, Europe and the Middle East.

Canada has the capacity to refine 2.0 million barrels per day, with 46 percent of the input oil being imports from foreign nations. Canada also imports 2.1 billion gallons of refined gasoline. Canadians consumed 12 billion gallons of fuel a year (or 289 million barrels of oil per year). So around 50 percent of fuel consumed by Canadians per year is imported, and 50 percent is domestically refined.

However, where Canada is especially vulnerable is in its oil infrastructure. Over 80 percent of oil production comes from Alberta. Canada only has one pipeline (TransMountain) going to the West Coast (British Columbia). There is no pipeline connecting eastern and western Canada. Line 5 is the only pipeline providing oil to eastern Canada, and it comes from Michigan. Line 5 provides 45 percent of oil to Ontario and Quebec. Joe Biden has said he would review whether the United States government would close Line 5, imperiling eastern Canada with fuel shortages. The Atlantic provinces rely almost entirely on imported oil for their fuel needs.

The main issue for climate change activists and the Canadian oil sector is the oil sands. The Canadian oil sands is the fourth largest oil reserve in the world. Sixty percent of Canadian oil production comes from the oil sands, and it employs 400,000 people. However, the extraction and refinement process produces carbon-heavy emissions, unless expensive green technologies are used to remove the carbon. The Trudeau government is under increasing pressure to stop the oil sand industry entirely.

“Cabinet should act to ‘leave the majority of the fossil fuels in the ground from now on,’ a scientific panel of the Canadian Meteorological and Oceanographic Society has been told,” according to Blacklock’s Reporter. “Further mining of Alberta oil sands is ‘unacceptable in terms of the survival of this planet,’ said a climate scientist: ‘You have the power.’”

The National Post wrote: “David Suzuki, the godfather of the Canadian environmental movement, warned over the weekend that if politicians don’t act to reverse climate change, there could be attacks against oil and gas infrastructure.” Suzuki said: “[T]here are going to be pipelines blown up if our leaders don’t pay attention to what’s going on.”

The Financial Post reported that 70 percent of the oil sands are owned by foreign entities, with 16 percent being owned by China. One possible scenario is that Canadians may face fuel shortages and crushing fuel prices while the oil sands continue to be exported to foreign markets.

Any aggressive plan to phase out the oil sands would be the most significant blow to the Canadian economy possible. However, it does appear that the Trudeau government is planning an aggressive policy. Natural Resources Minister Johnathan Wilkinson announced that those who lose their jobs due to climate change policies will be given financial support. Details have not been released yet, but this will likely be career retraining and monetary unemployment aid.

Any disruption in the oil sector would have serious ramifications to the economy and to energy supplies. Fuel shortages and rationing would be a likely outcome as demand outstrips supply. The government is already taxing Canadians for driving non-electric cars. The federal government gains $6 billion a year in revenue from carbon taxes on top of sales taxes. In 2019, all levels of the Canadian government collected $18 billion.

Why is there a deliberate agenda to destroy the energy sector while it is clear it would destroy the economy? The same decisions are being made in the U.S. by the Biden administration. Rex Murphy wrote at the National Post:

[Biden] and Trudeau are really as one, even as the younger of the two may take a little time to realize that killing the Ontario auto industry—which is Biden’s goal—is a perfect reflection of the prime minister’s clear-sighted and brave determination to kill the oil industry of Alberta.

The radical left has begun an aggressive campaign to destroy the energy sector under the guise of global warming. This furthers the goal of radical transformation. In “COP26 and Barack Obama’s War Cry,” theTrumpet.com managing editor Brad Macdonald wrote:

Obama’s presence at cop26—not to mention the summit’s sheer size and length (almost two weeks)—is also interesting in the context of covid-19 and the global pandemic. For socialist-minded, law-hating, big-government-loving globalists like Obama and countless other elites around the world, covid-19 presented a historic opportunity to advance their Marxist, totalitarian agenda. Across the globe, world leaders have exploited measures like lockdowns, mask mandates and vaccine passports to eliminate constitutional restrictions on governmental power, to limit individual rights, and to expand governmental power.

Don’t be surprised if climate change becomes covid 2.0, the next global man-made crisis designed to upend democracy and equip world leaders with dictatorial powers! Time will tell, but perhaps this is what cop26 was all about: manufacturing the next global crisis.

This is the real goal of Trudeau’s war against the energy sector. This crisis is about to have a major impact on your life. The environmental movement has been hijacked to attack America and the British nations especially. To learn more about this movement, please read “Weaponizing Environmentalism,” from the January 2022 Trumpet issue.