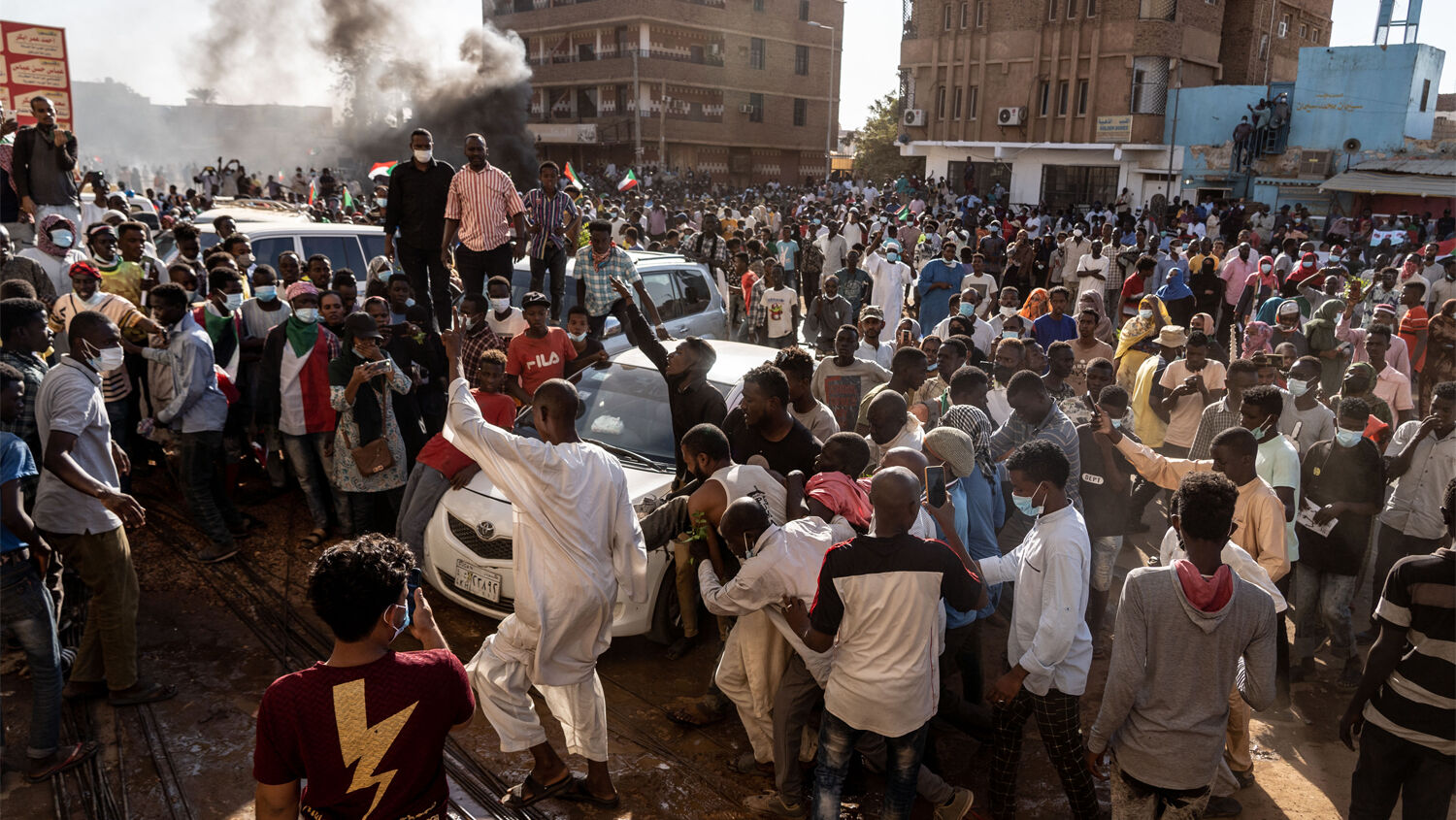 An injured man is carried through a crowd during a Day of Resistance demonstration on November 13, in Omdurman, Sudan.
Stringer/Getty Images

Democracy’s failure is opening the door for major powers to come in and take over the resource-rich continent.

Last month, Africa experienced its fourth coup of the year when Sudan’s military arrested the prime minister and seized power. Gen. Abdel Fattah al-Burhan insisted it was in order to “save the country from civil war,” according to the Times. If that is true, it certainly doesn’t look like the people want to be saved. Thousands of Sudanese have been protesting since October. Their military “saviors” have killed at least 23 citizens and injured over 200 in response. Ten were shot dead on November 18 alone. United Nations Secretary General Antonio Guterres said Africa is suffering from “an epidemic of coup d’états.”

Evidence of the failure of democracy in Africa is rising. The 1990s were supposed to be the beginning of a democratic sweep across the continent. Only two African countries were ranked “free” by Freedom House ratings in 1989. By 2009, 36 were classified as “free” or “partly free.” But today, according to a 2021 survey by Freedom House, only eight African countries are free and democratic. Undemocratic governments are becoming more and more common, and corruption is flourishing. Zimbabwe, my home country, is an excellent example.

In 2017, Robert Mugabe was ousted by a military coup. His regime had been highly corrupt, and the new one pledged its desire to “save” the country. “Zimbabwe is open for business,” declared the new president, Emmerson Mnangagwa.

But since 2018, 82 percent of government expenditure has featured some sort of financial irregularity. In addition, up to $18 billion worth of gold, tobacco, platinum and other resources have been plundered by corrupt government officials. Nearly 10 million Zimbabweans, 67 percent of the nation, live in poverty; over 2 million live in extreme poverty. Violent suppression of protests has been a feature throughout. This situation is the same across the continent.

Former South African President Jacob Zuma is currently on trial on corruption charges. Two Namibian ministers allegedly received bribes from an Icelandic company to gain lucrative fishing rights at the coasts. Several officials in Kenya, Zimbabwe, Somalia, Nigeria and other countries are facing coronavirus-relief funds corruption charges. With these issues, African governments generally fail to provide basic services to their citizens. Now, they are being forced to divert what little funds they have available to combat rising extremism.

Emboldened by America’s retreat from Afghanistan, a mix of al Qaeda and Islamic State affiliates have been conducting bolder and bolder Islamist uprisings in Northern Africa and across the Sahel. “These groups are also cleverly exploiting fissures along ethnic, economic, and religious lines to garner more and more recruits,” said Corinne Dufka, a Sahel expert at Human Rights Watch. “They have overwhelmed the regions’ armies and fed on challenging geography and weak and often corrupt governance.”

And so, as the “usual” jihadist activities of kidnap, drug and human trafficking have continued, the actual terrorist attacks have gotten bolder. More than 700 people have been killed this year alone by terrorist attacks. One attack in Niger killed 69 people, including a mayor. In Nigeria, Boko Haram is determined to spread unrest as far as possible, so it merged with a rival Islamic State affiliate to spread unrest to coastal countries.

On the Western side of Africa, the Gulf of Guinea has been tormented by piracy. According to the International Maritime Bureau, 33 ships were boarded in just the first three months of the year. More have been attacked, hijacked and fired at, while over 40 crews have been kidnapped and ransomed.

On the eastern side, terrorists have targeted the strategically important Horn of Africa. Terrorist group al-Shabaab has spread its terror campaigns into neighboring Kenya, Djibouti and Ethiopia.

However, some countries like Zimbabwe, Cameroon and Tanzania have enacted faux anti-terror campaigns to justify increasing authoritarianism. Ethiopia, for its part, has mobilized its police against its own citizens. Tigrayans have been arrested in door-to-door campaigns allegedly aimed at capturing terrorists.

Africa is corrupt, led by authoritarian leaders who refuse to give up power and oppress their own people, beleaguered with poverty, and plagued by violent extremism. All these foul ingredients create a recipe for disaster.

Africa is in trouble. And this makes it ripe for the taking.

This was the case at the end of the 19th century. Several European countries had rapidly developed through the Industrial Revolution. The powerhouses saw an under-developed continent ready to be exploited. Until then, these European powers were more or less on equal footing. Now, whoever could acquire the most lucrative colonies would be able to surge forward. And thus came the scramble and partition of Africa. And it definitely was a scramble. In 1880, there were only a handful of African colonies. By 1900, only Liberia and Ethiopia remained uncolonized.

Britain, Belgium, France, Germany, Italy and Portugal all had colonies. They were able to take advantage of the fact that the continent was highly divided. It was largely ruled by centralized governments that were constantly at war with one another. Cecil John Rhodes found that Africa was mostly “a village system with separate headmen.” And so, the Europeans went to the biggest “villages” and engaged with their kings.

King Lobengula of Zimbabwe was as big as they came. In the agreement called the Rudd Concession, he was promised £100 per month, 1,000 rifles and 100,000 rounds of ammunition. In exchange, the British received ownership of all metals and minerals in Lobengula’s kingdom and could “do all things that they may deem necessary to win and procure” these precious substances.

And thus, Africa was colonized and “open for business.”

History is about to repeat itself. Except the character of the actors is different. In Zimbabwe, instead of Britain working to acquire mining rights, it’s China. And this time, it’s paying billions to a corrupt government. In 2019, China lent Zimbabwe $1.3 billion for key construction projects. However, the Zimbabwean government inexplicably diverted $10 million from an escrow account for one of the projects. The money simply vanished. The Chinese don’t seem to care. There is an apparent no-strings-attached policy to its loans. But the reality is that nothing comes for nothing.

China’s investments have effectively purchased lucrative mining rights in the resource-rich country. It has been able to plunder gold, platinum and diamonds, as well as other raw materials like copper and timber that its highly industrialized economy requires. It has even received presidential approval to mine in conservation areas. It apparently doesn’t even matter that Chinese miners regularly engage in inhumane treatment of their Zimbabwean workers.

But it isn’t just China moving in. Between 2010 and 2016, 320 new embassies were opened in Africa. Turkey opened 26; India opened 16. China has links with 45 African countries. Russia has military ties with 19. Arab nations are setting up military bases in the Gulf. And the increased Islamist extremist activity shows that Iran, the number one terrorist-sponsoring nation in the world, has a vested interest in Africa as well.

But this year in particular has exposed the failure of Africa’s experiment with democracy. Autocratic governments are a common feature. Corruption is inherent in these undemocratic countries. Moreover, they are beset by poverty, diseases and natural disasters. Despite all these issues, major powers are eager to collaborate with African nations. Major powers and investors continue to display a willingness to do business with corrupt governments. Why? Because they sense the opportunity to gain a foothold in a strategically important resource- and mineral-rich continent. They can see the storm clouds of war gathering. And wars cost money. Controlling strategically important sea lanes and ports and acquiring lucrative mining rights could be the difference between victory and defeat.

African democracy is dying. And more and more vultures are beginning to circle. Meanwhile, the European Union is still reeling from the Afghanistan debacle. France is in the process of retreating from the Sahel. Germany, Europe’s de facto leader, is itself a rudderless ship with no course.

And yet Africa plays a key role in Europe’s energy future, particularly in the interest of reducing dependence on Russia. Europe certainly needs the mineral riches, oil, gas and strategic waterways, particularly around the Horn of Africa—the very area Iran is working hard to destabilize. Incidentally, this destabilization usually results in a European refugee crisis.

How long will Africa remain open for business? And how will Germany respond?

Torschlusspanik is a German word meaning “door-closing panic”; it’s how they describe the scramble for Africa in the 19th century. It’s also a very apt description of just how rapidly nations are queuing up to pillage the resource-rich continent today. The door is rapidly closing for Germany.

The Bible has much to say about the “new” scramble for Africa in prophecies about the end time, the time we are living in now.

None of the new colonizers will be as benign as Britain was in its colonial administration. As late Trumpet writer Ron Fraser wrote in 2008, “The more unsolvable Africa’s problems become, the greater the chance these powers will seek to enforce peace among its multiple tribes so that they can grab those much-needed resources—and place under burden the plentiful supply of African labor—to meet their own ends.” The Bible prophesies about a German-led Europe owning slaves (Revelation 18:13). A vast number of these will come from the conflict-ridden, poverty-stricken continent plagued by corruption and greed.

And just as the first scramble came at a time of competition among major powers, this new scramble will be a main contributor to the coming unparalleled global conflict (Matthew 24:21). The Communist powers in the East have a head start (Revelation 16:12). Radical Islam is increasingly pushy, accelerating its efforts of destabilization (Daniel 11:40). And a German leader is imminent, one who will lead the Holy Roman Empire one last time (Revelation 17:10).

Africa will be involved in all of this in a tragic way. It needs a miracle to escape this coming conflict. The entire world does. Thankfully, the Bible also prophesies that that miracle will come in the form of Jesus Christ’s Second Coming. But until then, watch for Africa’s troubles to continue. Expect more African countries to be exploited by major, foreign powers, while other strategically important countries are increasingly targeted by Islamist insurgent groups. And watch for Germany to unite under one leader and enter the fray, taking center stage in the conflict around the resource-rich continent of Africa.