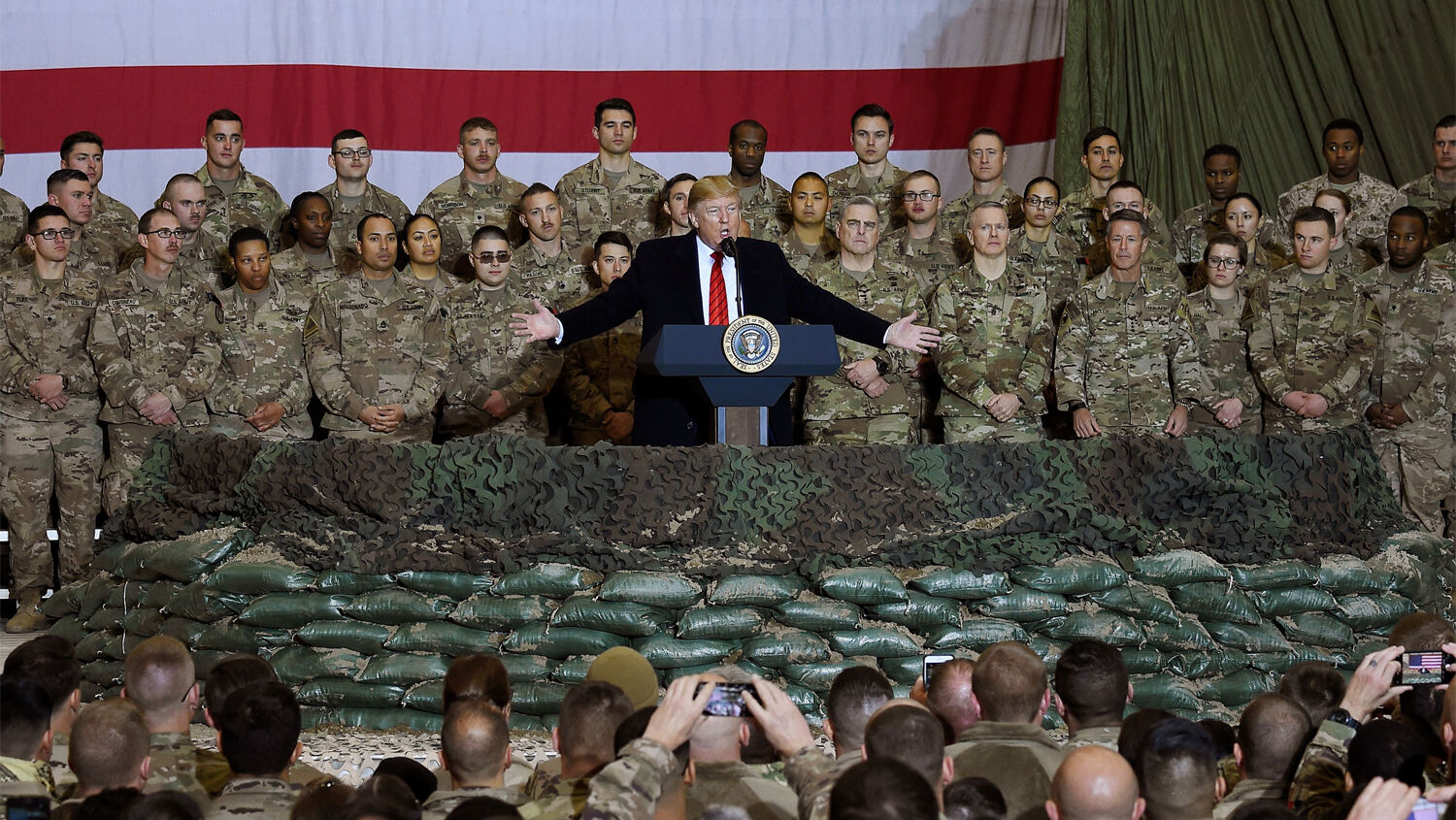 The Afghanistan nightmare continues to haunt us all. It has caused many of us to experience new heights of disbelief and anger. But imagine watching events in Afghanistan as a member of America’s military.

For 20 years, the Taliban, a ragtag collection of roughly 75,000 genocidal terrorists, was the sworn enemy. More than $2 trillion has been spent fighting Islamist terrorists in Afghanistan since 2001. Nearly 2,500 soldiers have been killed in action, and over 20,000 wounded. Over the past two decades, more than 800,000 military personnel have served in Afghanistan, many experiencing tremendous pain and sacrifice. The Department of Veterans Affairs estimates that up to 20 percent of veterans of the wars in Afghanistan and Iraq experience symptoms of post-traumatic stress disorder (ptsd).

Now imagine being a veteran and seeing two decades of blood, toil, tears and sweat unravel in less than two weeks.

Imagine watching your government simply hand over to the Taliban $85 billion worth of the most powerful and sophisticated military equipment in the world—hardware and weapons created to give you the advantage (and confidence) on the battlefield.

Imagine learning that Biden officials just directed federal agencies to erase their websites of official reports and audits documenting how much military equipment America gave to Afghanistan that is now in the hands of the Taliban.

Imagine receiving phone calls or texts from friends in Afghanistan, from Afghan translators and interpreters, and hearing their terrified, hopeless pleas as the Taliban moves door-to-door torturing, raping and executing anyone who supported America.

Imagine learning that, on its way out, your government gave the Taliban a list (a kill list) of American citizens, green-card holders and Afghan allies still in the country.

Imagine being a soldier and learning about the irrational decision to slip out of the Bagram Air Base in the middle of the night, and the strategically horrendous decision to evacuate tens of thousands from the airport in urban Kabul.

Imagine watching caskets draped in the U.S. flag, holding the disfigured corpses of American soldiers, being carried from the hold of a C-17 Globemaster plane, and seeing America’s droopy president repeatedly check his watch.

Imagine learning that the request to read in Congress the names of the 13 U.S. soldiers killed in Kabul was denied by House Speaker Nancy Pelosi.

Imagine watching the viral video of Lt. Col. Stuart P. Scheller Jr. passionately articulate his “growing discontent and contempt” with military leadership and the total “ineptitude at the foreign-policy level,” and then learning that Scheller was subsequently demoted, then driven to retirement.

Imagine having friends and family who were interrogated by the Federal Bureau of Investigation, even persecuted and jailed, for attending the January 6 political rally in Washington, D.C., but then seeing America’s president walk away scot-free from America’s greatest military blunder ever.

Imagine hearing the Biden administration call the Taliban a trustworthy ally in Afghanistan (specifically against isis-K).

For those of us not in the military, it’s probably hard to fully comprehend the fury and despair coursing through America’s armed forces.

Not with the Taliban but with America’s government—with Joe Biden and figures like Mark Milley, Lloyd Austin and Antony Blinken. The steady flow of irrational, self-destructive and deadly decisions and policies coming from the upper echelons must be deeply infuriating and demoralizing.

What do you do with these emotions? What are your options?

Afghanistan absolutely demolished the trust and confidence many of America’s soldiers have in their top leaders, especially the commander in chief. It’s not just the fatal decisions, it’s the lies and deception, the double-talk, the blatant refusal to accept responsibility. Just yesterday, Mr. Biden called Afghanistan an “extraordinary success.”

Sure, it was—for the Taliban.

It is hard to appreciate how difficult this moment is for America’s veterans. What happens when a soldier’s faith and confidence in his superiors vanishes? When there’s little to no trust and confidence in those above you, it is much harder to obey—to carry out your orders. To do your job.

Afghanistan will thrust some into an existential crisis. This crisis has exposed many of America’s top military leaders, not just as ignorant or weak-willed—but as active members of the radical left. What do you do when you begin to realize that the men at the top are corrupt, that they actively support Barack Obama’s goal to fundamentally transform the America you serve and love?

These are some of the questions U.S. soldiers are wrestling with. In the weeks and months ahead, we’ll see how they answer them. Some will no doubt go along with the radical overhaul of the military. Some will accept, perhaps begrudgingly, the military’s embrace of Communist principles and political correctness, the focus on racial and gender equality.

But many, at least at some point, will begin to resist. For some, resistance will mean departure. Expect retirement figures to skyrocket.

But there is another option. This option will appeal to the patriotic veteran, to the serviceman alarmed about the direction of his government and his country. This option is ideally suited to veterans charged with emotions of frustration, fury and despair.

In the July issue of the Trumpet, editor in chief Gerald Flurry once again reminded readers of the prophecy that says Donald Trump—an end-time type of ancient Israel’s King Jeroboam ii—will return to the presidency. You will find this prophecy in 2 Kings 14 and Amos 7.

Mr. Flurry explained 2 Kings 14:28 and delivered some powerful forecasts. “Now the rest of the acts of Jeroboam, and all that he did, and his might, how he warred, and how he recovered Damascus, and Hamath, which belonged to Judah, for Israel, are they not written in the book of the chronicles of the kings of Israel?”

“Verse 28 of 2 Kings 14 strongly indicates that Mr. Trump recovers his presidency by some kind of warring—not voting,” Mr. Flurry wrote. “It seems certain to me that this will happen before the next presidential election in 2024—unless there would be some kind of war and voting combined. But 2 Kings 14:28 does not even hint of an election.”

How many veterans have the same view as Ross Schambon, a former sniper who served in Afghanistan? Talking about the Biden administration, he said recently, “They just kind of lay down. They’re laying down for everything. Whereas the previous president, he actually had a backbone” (emphasis added).

Earlier this week, more than 90 retired generals, admirals and military officers signed a letter demanding the resignation of Joe Biden’s top military and defense officials, including Defense Secretary Lloyd Austin, Chairman of the Joint Chiefs of Staff Gen. Mark Milley and Secretary of State Antony Blinken. It’s hard to see Biden firing these men, which raises the question—how far are these retired military leaders willing to go to see their demands met?

All across America—in state and local elections, on Twitter, in school board meetings, in TikTok videos—we see evidence of a rising dissatisfaction and resentment for Mr. Biden and the radical left. On Tuesday, Chase bank—following a nationwide backlash—sent a letter to retired Lt. Gen. Michael Flynn apologizing for canceling his credit cards and bank accounts.

A spirit of resistance and revolt is swelling across America—and in America’s military.

In his article, Mr. Flurry explored the meaning of the word “warred” in verse 28. He wrote: “Consider how different this word is from ‘saved’ in verse 27. Mr. Trump did not literally have to war to save Israel during his first term—though he did have to fight to expose all the fraudulent investigations, treasonous acts and bogus impeachments. There are different ways you can war, but the indication is that regaining office may take considerable work. Donald Trump will have to fight for it. It doesn’t have to be military action, but it certainly could.”

If you haven’t done so, read “What Will Happen After Trump Gains Power.” While you are at it, I encourage you to also subscribe to our free print magazine the Philadelphia Trumpet. The only way to understand what is happening in America, in Afghanistan and in this world, is to consider events through the lens of Bible prophecy. This is exactly what the Philadelphia Trumpet does.

I’ll conclude with one last statement from Gerald Flurry: “President Trump could also lead some states to secede from the union. That would lead to some kind of warfare.”

Some might think this is far-fetched or implausible. But is it really?

Just imagine you are part of America’s armed forces right now. Who would you prefer to serve, and who do you think is more interested in your safety and in protecting and preserving your America—Joe Biden and the radical left, or Donald Trump?