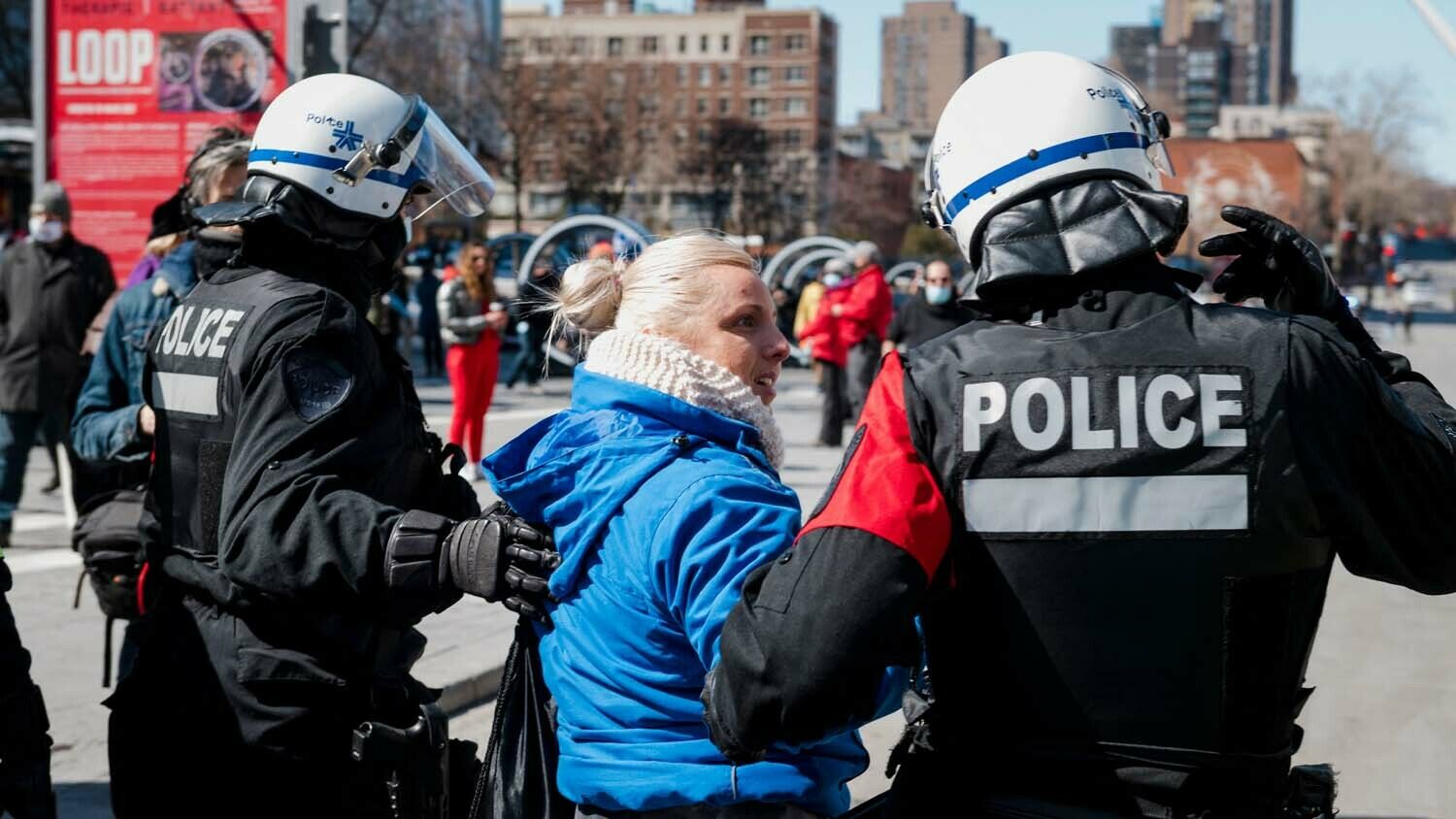 Canadians’ lives are now dominated by the willpower of the powerful.

“In Canada you are reminded of the government every day. It parades itself before you. It is not content to be the servant, but will be the master ….” American philosopher and naturalist Henry David Thoreau published that observation in 1886 after visiting Canada. More than 130 years later, his statement rings even truer.

The government dominates the lives of Canadians. You cannot go about your daily routine without encountering vaccine mandates, travel restrictions, censorship, oversight and bureaucratic interference. Canada has been transformed from being ruled by its constitution to being ruled by the will of its leaders.

“A constitution, it is true, is more than the written text,” Andrew Coyne wrote in the Globe and Mail. “It depends on a cultural consensus that the constitution is something to be respected and not ignored or overwritten or bent out of shape by interpretation.” The law of the land might be noble, free and fair. But if people are not willing to submit themselves to it, the law of the land is merely words and what constitutes the nation is, instead, the will of the elites.

Federal, provincial, municipal and bureaucratic leaders have all been aggressively abandoning the principle of governing according to the law. This has been an agenda for decades, but it has dramatically increased during the government lockdowns associated with covid-19. Coyne continued:

In Canada, the institutions responsible for upholding that consensus—governments and courts—have repeatedly shown themselves incapable of it.

The result is a kind of muted anarchy, where the Constitution increasingly says whatever the most popular premier or determined ideologue says it does. The rule of law is being replaced by the rule of will.

Canadians now live in the age of the will. Facts, laws, human rights and civil liberties do not restrict them. The determining factor is not reality but rather what the elites claim is reality—and what they subsequently force you to submit to.

Replacing law with will leads to anarchy.

The Bible prophesied this age of deception and will worship. It also prophesied how we can be free of it.

Canadian federal and provincial government leaders have used the pretext of a public health emergency to oppress the people rather than represent them. One of the most disturbing examples was the ruling by Alberta judge Adam Germain on the cases of Artur Pawlowski, Dawid Pawlowski and Christopher Scott. They were charged with defying public health orders by holding church services and staging protests against the covid-19 restrictions. The men have been assessed with tens of thousands of dollars in fines and are required by court order to pseudo-censor their own speech when they say anything about the disease and the government restrictions: They must state that what they are about to say is contrary to public health orders and the “majority of medical experts.”

Compelled speech and censorship of religious beliefs have begun in Canada, regardless of the fact that Section 2 of the Canadian Charter of Rights and Freedoms guarantees “freedom of religion” and “freedom of thought, belief, opinion.”

Dr. Theresa Tam, Canada’s top health officer, stated that there is no evidence that vaccine passports stop the spread of the virus, but she proceeded to endorse the policy anyway. When Prime Minister Justin Trudeau pledged to give $1 billion to any province that imposes a vaccine mandate, Ontario Premier Doug Ford, who initially said such a coercion might make Canada a two-tier society, quickly changed his mind and announced a vaccine passport requirement. British Columbia’s provincial health officer, Dr. Bonnie Henry, stated on May 26: “There is no way that we will recommend inequities be increased by use of things like vaccine passports for services for public access here in British Columbia.” Three months later, on September 7, Dr. Henry announced that residents of the province must receive a vaccine certificate in order to access what the government deems are nonessential services.

Trudeau has also mandated vaccines for all federal employees and for domestic air and rail travelers. The federal government’s own 1996 vaccination study says “immunization is not mandatory” in Canada because it violates the Constitution. Arjun Singh wrote at the National Post:

Indeed, the Charter of Rights and Freedoms states that Canadians have the “freedom of conscience and religion” (Section 2a), freedom of movement within Canada (Section 6) and “equal protection … before the law” (Section 15). At the very least, this would prevent the imposition of vaccine passport requirements on citizens—vaccinated or otherwise—for traveling, let alone while accessing basic services: for most charter rights are fundamental. Quebec’s program and the Trudeau Liberals’ recent federal vaccine mandate for flights and trains, thus, ought to be dismissed.

But they are not dismissed, because that is not their will.

All covid restrictions and mandates have been predicated on a narrative that covid-19 is a deadly virus that could overwhelm the health-care system. In 2020, 26,447 Canadians were recorded as dying from covid-19. In the same year, 7,595 Canadians were “medically assisted” in their deaths, and (on the low end) an estimated 28,000 Canadians died from medical malpractice. Statistics Canada has yet to release the data on causes of death in 2020, but in 2019, 80,152 died of cancer and 51,541 died of heart disease.

If the leaders can ignore the law in this instance, they can ignore the law elsewhere. Trudeau is now pushing Bill C-10 to give an unelected regulatory council the power to determine what online content is “acceptable,” an online hate speech bill to censor and fine whatever government elites say is “hate speech,” and an online harms bill to create another regulatory council for censoring social media and sending inspectors into Canadians’ homes and workplaces without notice.

Elites like Justin Trudeau embody what the radical left has been striving to achieve in Canada for decades.

The heart of our Constitution is “peace, order and good government.” Why We Act Like Canadians author Pierre Berton says that “good government” to most of us in Canada usually translates to “strong government.” He writes:

To realize what we consider to be the best of all possible worlds, we Canadians have been prepared to pay a price. The other side of the coin of order and security is authority. We’ve always accepted more governmental control over our lives than [Americans] have—and fewer civil liberties.

In 1982, another Trudeau changed the way Canada was governed. Justin’s father, Pierre, was an admirer of Communist China. Canadians elected him prime minister, and he used the position to overhaul the Constitution itself. The Charter of Rights and Freedoms, meant to guarantee Canadians’ rights, became a tool for radical leftists to interpret according to their agenda—their will. Singh explained:

But this is Canada: where, for years, left-wing Liberal values have slowly invaded our legal system. This was true for Trudeau’s father, Pierre Elliot, as it is now. Hence, in 1982, when the charter was introduced, its first section included the following proviso: “The Canadian Charter … guarantees the rights and freedoms set out subject only to reasonable limits … as can be justified in a free and democratic society.” In essence, the charter rights of anyone may be limited for what the state considers “reasonable.”

This provision in the charter was exploited in 1986 by activist Supreme Court justices appointed by Pierre Trudeau. The court unanimously created the “Oakes test” to define what restrictions on charter rights are reasonable. “Among others, it allowed the curbing of charter freedoms in the name of ‘a commitment to social justice and equality’ and ‘respect for cultural and group identity’” (ibid). In a single decision, a radical-left court opened the door for the abuse of Section 1.

Canada is now facing the heavy price of prizing order and security over liberty and allowing lawlessness to replace law.

The Bible explains this age as a dangerous time of deception with only one way to escape!

Trumpet editor in chief Gerald Flurry wrote in “A Dangerous New Age of Worshiping the Will”:

When human beings reject God’s truth, they start worshiping their own opinions. They start thinking like Satan. When this type of thinking becomes entrenched enough, people stop even caring about the difference between true and false. They start trying to magically “create reality where no reality is.”

This perfectly describes the state of our leaders today. They create their own reality and force others to accept it and obey, no matter what the truth is.

Such reasoning paves the way for tyrants! Tyrants hate facts and truths that limit their power. So they ignore reality in favor of their own “magic interpretation” of the world. Every tyrant is a tool that the devil can use to cast God’s truth to the ground (Daniel 8:12).

We must recognize the evil spiritual force behind this push to undermine the law!

Truth does exist, however. And it can be discovered if you are willing to put it above, rather than below, your own will. The otherwise undiscoverable fundamental truths are revealed in the Bible. Jesus Christ promised that you can know the truth, and the truth will set you free (John 8:32). To learn how much of the confusion and danger in the world around you traces back to will worship, and to learn what true freedom is, read “A Dangerous New Age of Worshiping the Will.”