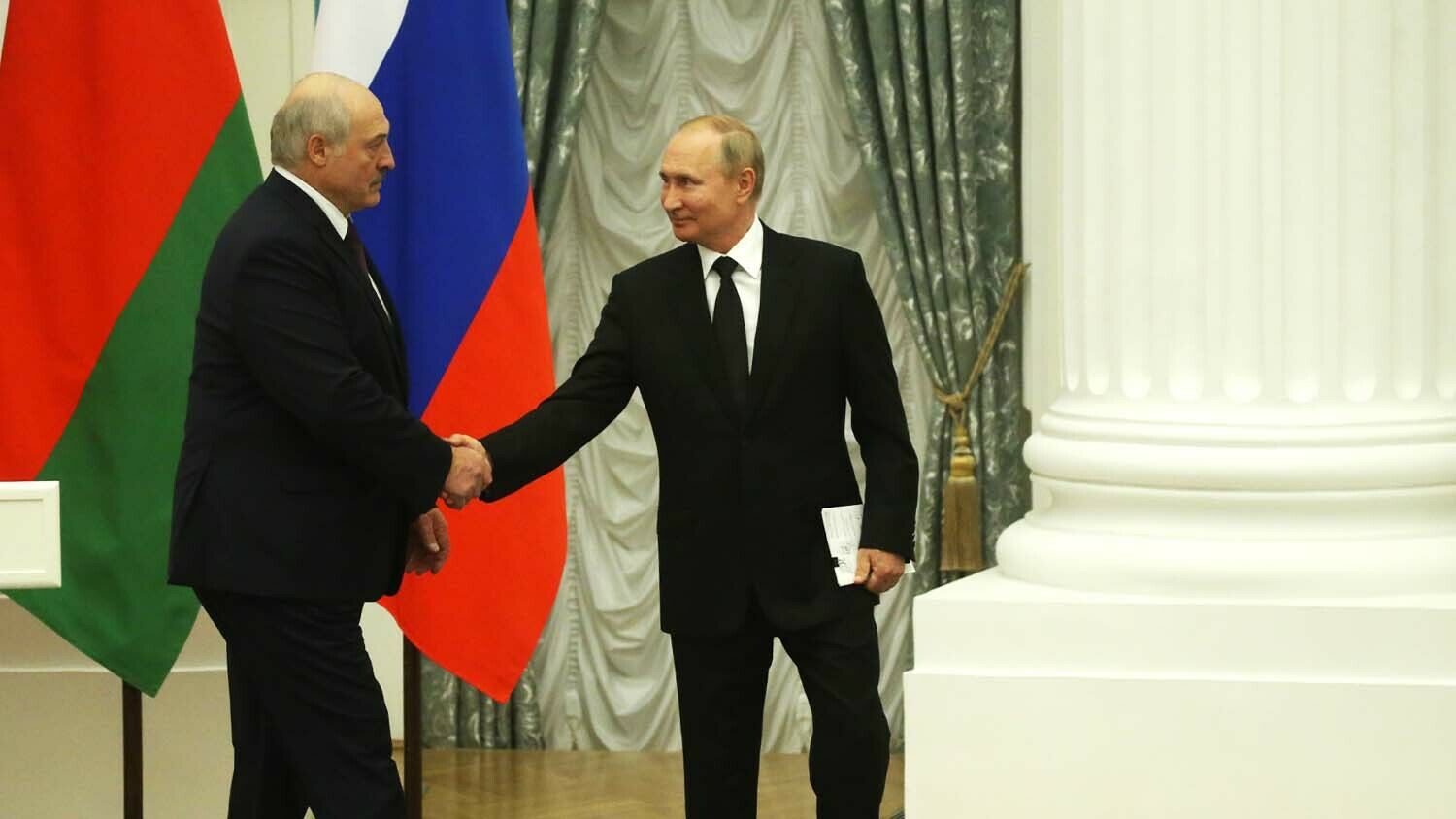 The Belarussian leader saw that his days of walking the tightrope between Russia and the West were over; his years of resisting Putin had come to an end.

Russian President Vladimir Putin and his Belarussian counterpart, Alexander Lukashenko, met in Moscow on September 9 and signed agreements representing 28 specific programs that all have one underlying purpose: pave the way for Russia and Belarus to be merged into one country.

The agreements are a major step in a plan that has been in the works since 1999 when Lukashenko and Putin’s predecessor, Boris Yeltsin, signed a deal to merge Belarus and Russia into a two-state federation—with just one flag, one currency, one judiciary, one integrated economy and one military. Since 1999, however, Lukashenko has dragged his feet on making the merger a reality. He pursued a multi-vector foreign policy, meaning despite close alignment with Russia, he also maintained a productive working relationship with various European nations and the United States. By walking the tightrope between Russia and these Western powers, he prevented Russia from swallowing Belarus up.

But in August 2020, Lukashenko rigged a presidential election to remain in power, and his people came out in unprecedented numbers to demand that he step down. Some 200,000 Belarussians marched through the capital city for weeks on end, and it was not Europe that helped him survive those protests. Nor was it the U.S.

While Belarussians were demonstrating, Putin announced that he was prepared to send Russia’s military in to help Lukashenko subdue the protesters and ride out the storm. And while most European leaders refused to accept the rigged election results, Putin eagerly endorsed them. As Europe and the U.S. unleashed wave after wave of sanctions on Lukashenko’s regime to punish it for its brutal crackdown on the opposition, Putin gave Lukashenko hundreds of millions in cheap loans and he maintained steeply discounted supplies of natural gas to Belarus.

It is clear that Putin threw Lukashenko a lifeline when no one else would–and when the Belarussian dictator needed it the most. Without Putin, Lukashenko would not have survived politically. Both he and Putin fully understand that.

And so it was in this context that Lukashenko met with Putin on September 9 and agreed to green-light parts of the long stalled Creation of a Union State of Russia and Belarus. Lukashenko only reluctantly made this move because he knows it is leading to a surrender of Belarussian sovereignty to Moscow. He knows it ends his main foreign-policy legacy and bodes ill for his personal political fortunes. But he had no choice. He had exhausted all other options. His days of walking the tightrope and balancing Belarus between Russia and the West were over.

Lukashenko’s years of resisting Russia had come to an end.

So he took some major steps in letting Russia absorb his nation. The 28 programs he and Putin agreed to have an economic focus mainly: They institute common tax measures for the two nations. They build a common customs policy, and align various financial controls for the two sides. So at this phase, the plan stops short of full political union.

But Putin stressed that laying the common economic basis was a necessary first step and that the rest can now fall into place. After the landmark meeting, he said: “First the economic foundation must be laid before moving further on the political track.”

The process is still far from over. But this meeting and the 28 programs that were initiated as a result of it represent a major step. It means a huge obstacle has been surmounted and economic integration is now underway.

Meanwhile, signs have emerged showing that military cooperation between Russia and Belarus could quickly reach a new level. Just three days after meeting Putin in Moscow, Lukashenko visited the Mulino training ground in Western Russia. Russia is currently hosting the “Zapad 2021” military exercises there, and thousands of Belarussian soldiers are taking part. During his visit, Lukashenko said Belarus would be buying more than $1 billion worth of arms from Moscow, including Russia’s famous S-400 air defense system.

Belarus’s major role in Russia’s Zapad drills alongside this massive weapons purchase augurs a degree of military cooperation between Russia and Belarus that has not been seen since Soviet times when Belarus—along with 13 other nations—was hammered into full political, economic and military union with Russia.

When that union fell apart in the early 1990s, much of the world rejoiced. The Soviet Union was notorious for its oppression, dehumanization, purges and prison camps. And its horrendous industrial policies had killed dozens of millions of its own people. So when it collapsed, many viewed it as a victory for freedom, and they celebrated.

But not Vladimir Putin. During a speech back in 2005, he called the breakup of the Soviet Union “the greatest geopolitical catastrophe of the [20th] century.”

He has made clear that what he misses is not the politics or economics of the Soviet Union. What he misses is the power and prestige. He looks back longingly on the era when Russia and all those other nations were forged under the Soviet hammer into one massive, nuclear-armed superpower—and all under the control of the Russian leader.

In the years since Putin spoke those revealing words, he has channeled much of Russia’s might into hammering those nations back together. He is working not only to reverse that “catastrophe” but to create something even mightier than the Soviet Union was at its mightiest.

Toward this end, Putin invaded the former Soviet nation of Georgia back in 2008, bringing a fifth of Georgia back under Russian control. That was a major hammer blow in Putin’s strategy of trying to reforge the Soviet Union. Then in 2014, Putin hammered more strategically vital pieces of the old Soviet machine back into Russia when he invaded Ukraine and annexed the Crimean Peninsula.

So this desire to rebuild the Soviet Union—to reverse what he called the greatest geopolitical catastrophe of the last century—has long been at the heart of Putin’s foreign policy. And he is now heating Belarus up to forging temperature, possibly preparing to hammer it in as the next part of Russia.

The Trumpet carefully watches Putin and his grip on power both inside Russia and over other nations because of what Bible prophecy says about the role of Russia’s leader in end-time events. Revelation 9:16 describes a huge Asian army that will be a major player in World War iii. With 200 million soldiers, it will be by far the largest army ever assembled in human history. Ezekiel 38:2 says a “prince of Rosh” will be the man leading this colossal Asian force.

In the Trumpet’s September 2014 issue, editor in chief Gerald Flurry gave the identity of this powerful Russian “prince.” He wrote:

I strongly believe Vladimir Putin is going to lead the 200 million-man army. … I see nobody else on the horizon who could do that. … Such a man doesn’t appear overnight. It takes years for even a strong-willed leader to gain such control. Vladimir Putin already has the power—and the will to use it. I believe there is not enough time for a competitor to arise and challenge him. This much is absolutely certain: The restoring of Russia’s power by Vladimir Putin—the prince of Russia—was prophesied!

By the time Mr. Flurry wrote his 2017 booklet The Prophesied ‘Prince of Russia,’ he was even more confident that Putin would personally fulfill this prophesied role. “The time frame of his rule … shows that nobody else could be fulfilling the Ezekiel 38 and 39 prophecy,” he writes.

This means there are some dark days ahead for Belarus and for all the world. But Mr. Flurry explains that there is also profound hope at the heart of these prophecies. In The Prophesied ‘Prince of Russia,’ he explains that the fact Putin is now in power—and on a warpath—proves that the most hope-filled event in mankind’s history is near. He writes:

Mr. Putin’s warfare is going to lead directly into the Second Coming of Christ. … Vladimir Putin is a sign, literally a sign, that Jesus Christ is about to return! This is one of the most inspiring messages in the Bible. … What we are seeing in Russia ultimately leads to the transition from man ruling man to God ruling man! And it is almost here! It is just a few short years away. …We have to realize that this is all good news because Jesus Christ is going to return to this Earth at the very end of the coming world war. … Surely we ought to be studying our Bibles and understanding these prophecies. They have such deep meaning and are so important to you!

To understand these important and hope-filled prophecies, order your free copy of The Prophesied ‘Prince of Russia.’