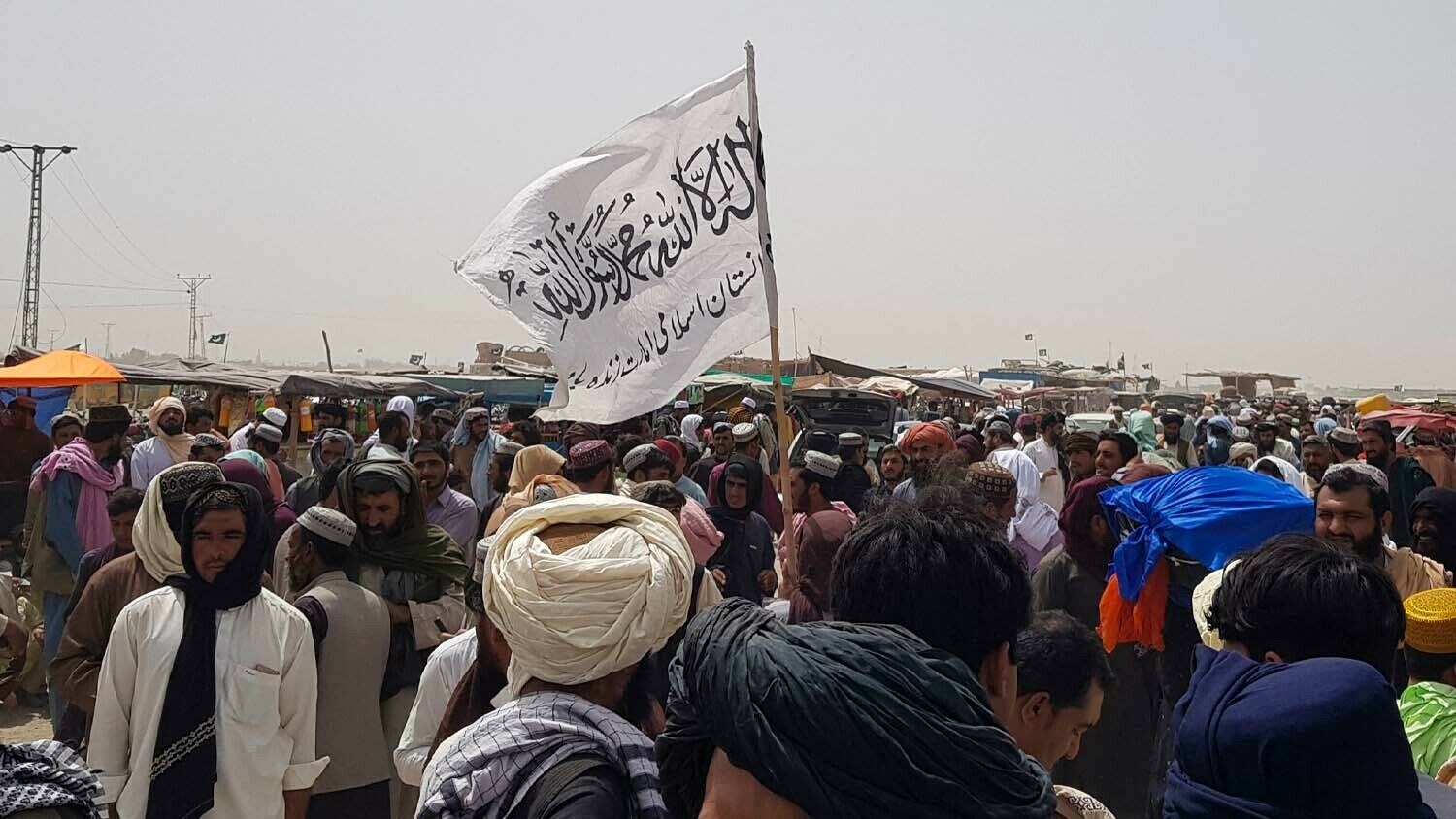 People gather around a Taliban flag near the Pakistan-Afghanistan border crossing point in Chaman on August 17.
AFP/Getty Images

The Biden administration just left $85 billion in advanced weaponry to a group of terrorists with designs on the world’s sixth-largest nuclear arsenal.

Just days after the Taliban sacked Kabul, a Taliban flag was flying above a mosque in Pakistan’s capital. The clerics running the mosque intended this gesture to spite the defeated Americans and encourage the Taliban. This may seem strange considering Pakistan was ostensibly an American ally in the war against the Taliban. But Pakistan’s government is soft on Islamic extremism, since a large number of Pakistan’s 200 million people are jihadis or jihadi sympathizers.

A poll of 2,400 people conducted by Gallup Pakistan revealed that 55 percent of Pakistanis are happy the Taliban took over Afghanistan. Now that the Taliban has almost $85 billion in American weaponry, many defense experts feel that these weapons may soon be used in terrorist operations in Pakistan and India. Former United States National Security Adviser John Bolton is even warning that terrorists may soon seize control of Pakistan and its 160 nuclear warheads.

“Many profound ramifications of America’s exodus from Afghanistan are competing for attention. Among the top challenges, Pakistan’s future stands out,” wrote Bolton in an August 23 Washington Post editorial. “For decades, Islamabad has recklessly pursued nuclear weapons and aided Islamist terrorism—threats that U.S. policymakers have consistently underestimated or mishandled. With Kabul’s fall, the time for neglect or equivocation is over. The Taliban’s takeover next door immediately poses the sharply higher risk that Pakistani extremists will increase their already sizable influence in Islamabad, threatening at some point to seize full control.”

Bolton noted that Pakistan’s Inter-Services Intelligence is a hotbed for Islamic radicalism. Even though Pakistan’s civilian government allegedly supports the U.S., its intelligence agencies are providing safe haven for terrorists and working to ideologically subvert the Pakistani military. Pakistani military doctrine holds that an Islamic regime in Kabul gives Pakistan “strategic depth” against India, so the Inter-Services Intelligence will likely give support to the Taliban.

Yet the Pakistani “deep state’s” efforts to empower the Taliban could backfire if the Taliban empower some of Pakistan’s own Islamist parties like Jamaat-e-Islami or Jamiat-e-Ulema Islam. These parties comprise only 2 percent of Pakistan’s National Assembly but are strong allies of the Taliban. If they ever take over Pakistan, the nation’s nuclear arsenal will fall into the hands of violent jihadis.

“Pakistan has nuclear weapons and 200 million people, many of whom celebrate Taliban victory,” wrote Sadanand Dhume in the Wall Street Journal. “If music-hating, anti-Western, anti-Shiite misogynists can seize power in Kabul, why can’t they do the same in Islamabad? At least one homegrown Pakistani jihadist group, the Tehreek-e-Taliban, is comprised of fighters already at odds with the Pakistani government. In a phone interview from Islamabad, Afrasiab Khattak, a former Pakistani senator, and Pashtun-rights activist, points out that Pakistan houses some 36,000 madrassas, or religious seminaries, some of which are militant. ‘The same places producing the Taliban are producing similar people in Pakistan,’ he says. ‘They will contest for power in Pakistan too.’”

Joe Biden, as vice president, helped destabilize Pakistan in 2008 when he and America’s Democrat-controlled Congress pressured Pervez Musharraf to quit as Pakistan’s army chief and hold fresh elections. Trumpet editor in chief Gerald Flurry commented on this situation in “Pakistan and the Shah of Iran”:

In terms of population, Pakistan is the second-largest Muslim nation in the world, behind Indonesia. It has a population larger than Iran, Iraq, Afghanistan and North Korea combined. Pakistan also has the nuclear bomb and could be taken over by radical Islam, with plenty of help from Iran. That means it could become a proxy of the Iranian mullahs. This would be the worst possible disaster! … And yet, the president and the Democrat-controlled Congress are threatening to cut off financial and military aid if Musharraf doesn’t hold elections early next year. President Musharraf pleaded with them not to cut off U.S. aid. American leaders are telling Musharraf to take off his military uniform and give real freedom to that country. However, the military is the only institution that gives stability to that extremely divided country!

Many of the weapons the United States left to the Taliban in Afghanistan have already been spotted in Iran; the Taliban and Iran are clearly working together. Could these radical powers have designs on Pakistan’s 160 nuclear warheads? Iran has been trying to get its hands on a nuclear warhead for decades, so the mullahs may find it expedient to use some of the weaponry America has left on the Pakistani border to empower insurgents in Pakistan.

Iran already rules much of neighboring Iraq and Afghanistan, and may soon get control over Pakistan (which historically was part of greater Iran). Then the mullahs will control a great nuclear-armed confederation of Islamic nations with the power to start World War iii!

For more information, read The King of the South.