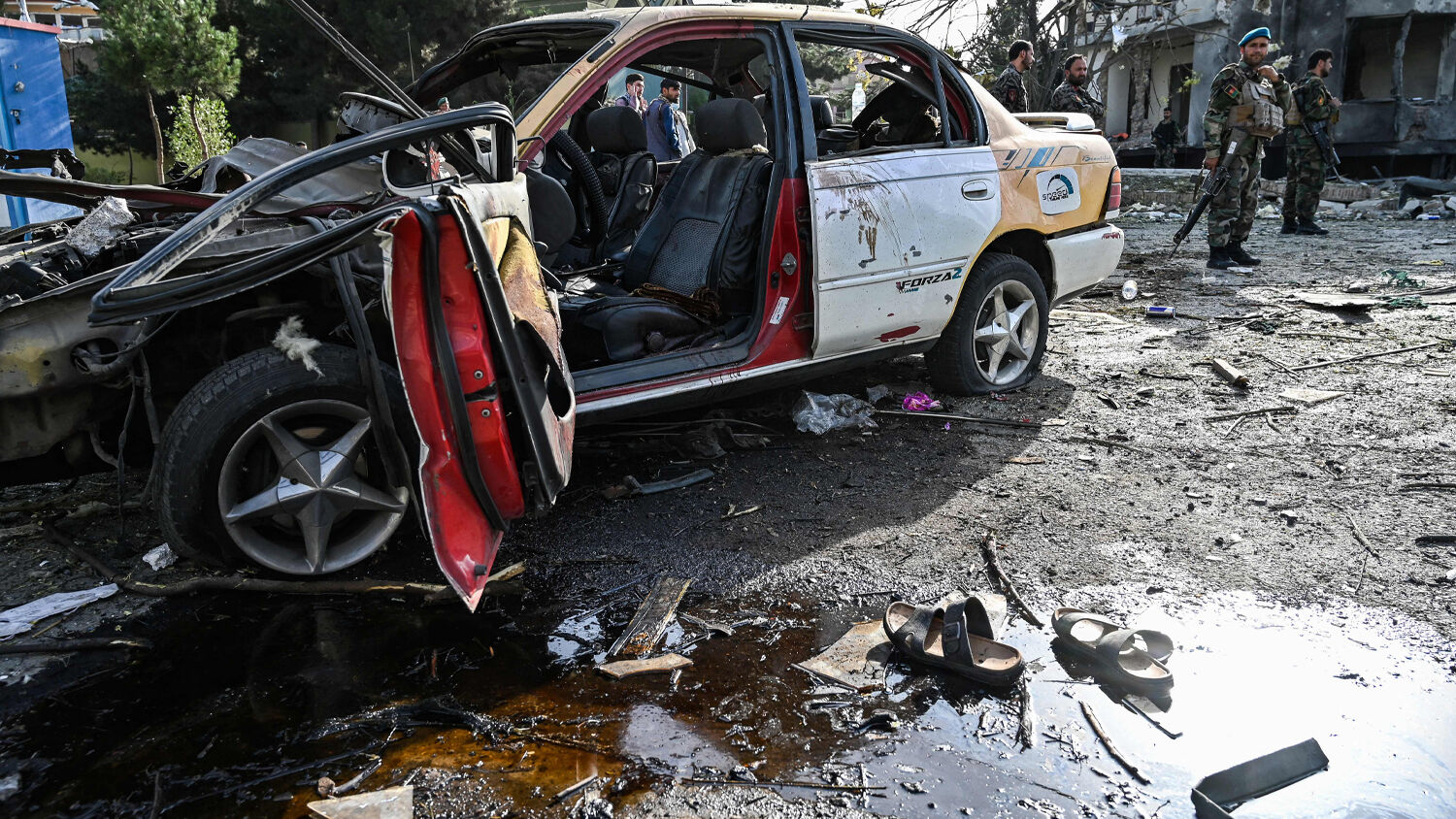 Afghan security personnel stands guard near the wreckage of a vehicle a day after a car bomb explosion in Kabul on August 4.
WAKIL KOHSAR/AFP/Getty Images

If you will learn it, you will have hope!

The Afghanistan catastrophe is an abject, shameful dishonor for America. Our nation has lost 2,448 soldiers and spent $273 million per day every day for 20 years on that war—a total of over $2 trillion. Yet our soldiers were evacuated in the darkness of night to leave this nation to barbarians.

The Taliban are gathering up girls age 15 and even younger and giving them to their fighters as “wives.”

After we hastily pulled out, it took the Islamist terrorists a matter of mere days to conquer the nation. Now America is being overrun in Kabul even before we can finish retreating from it. We are scrambling to try to get even the last of our own people out of there—a replay of the humiliation we suffered when we pulled out of Saigon, Vietnam. Now, as then, millions of people are going to be greatly persecuted and killed. Children and women are going to be abused, raped and murdered.

And America will leave behind one of the biggest terrorist nations in the world. Especially because of the air base, jets, armored vehicles, ammunition and other weapons and equipment America just abandoned—not to mention all the Afghan soldiers we trained who proved that they have no loyalty to anyone but themselves.

What a miserable deed by the American “superpower”! This is as shameful as anything America has ever done.

America is not just declining, it is dying. Other powers around the world see this clearly. They are taking advantage of this and preparing to replace American dominance with their own dominance. America is being destroyed before our eyes. Many are now in a state of open despair.

There is a sore lesson staring us in the face here. It points to prophecies in the Bible that we have been proclaiming—not just since the Afghanistan war started 20 years ago—but even back to Vietnam, and Korea and even World War ii before that!

The Holy Bible actually tells us what to expect in Afghanistan and around the world. Its prophecies reveal that the United States, as well as Britain, the Jewish nation and other related nations, are about to be trampled down by their enemies!

God prophesied that He would raise up “a nation and a company of nations” from the descendants of Abraham and grant them the “gates of their enemies.” He fulfilled that promise—in America and the British Empire. You can read all about this in our free booklet The United States and Britain in Prophecy.

God also prophesied that, if our nations turned away from Him, He would strip us of our power. We would become a byword and a spectacle among our enemies.

The Bible says that the Americans, the British and the other modern descendants of ancient Israel are about to be “tread underfoot” during the “times of the Gentiles.” We are in the outer edges of that horrifying storm! The scenes of hopelessness, barbarity and carnage coming out of Afghanistan will be replicated many times over—not only in distant lands, but even within these affluent, First World countries!

America’s humiliation in Afghanistan at the hands of Taliban fighters should alarm us all—and wake us up to a terrifying truth. Why is this happening? Because, as Leviticus 26:19 warns, God has broken the pride of our power. Yes, God is punishing us for our sins! That is why we can have such overwhelming military power, yet be so pathetically weak.

Then in verse 20, God warns, “[Y]our strength shall be spent in vain.” Does anything more graphically illustrate this than America waging an impotent war for two full decades at such high cost and evacuating in such disgrace?

These events should cause us to acknowledge that God is cursing America! This is plainly stated in the Bible. Yet very few are willing to admit this. The radical left want to blame all our troubles on things like climate change. But that is just a diabolical distraction from the lesson God is showing us so clearly: We as a people are disobeying God and facing the dire consequences. And because we refuse to acknowledge this, these wretched events are going to get far worse before this is over.

Americans are willfully ignorant of the facts. It is God who gave Britain and then America their power in the first place. It is God whom the British and the Americans have turned their backs on. And it is God who is allowing Britain and America to decline and who is actively punishing us in order to show us our sins.

There is hope, if we will learn this bitter lesson, repent from our sins, and turn to God.

So much Bible prophecy is being fulfilled in so many ways around this world. It is racing along like never before.

But look at what else He prophesied. Whether we will repent or not, a fifth world-ruling empire is coming. Daniel 2:33-35 show the end game. God Himself is going to break that final empire—as well as all other human world governments. He is going to break them into pieces! He will force us to learn the lesson that should be so obvious: Human beings are unfit and incapable of properly ruling over human beings. Only God can rule over men! And that is exactly what will happen: The glorified Jesus Christ is going to return and take over the literal government of all peoples and all nations.

God’s other prophecies have happened: This prophecy will too.

This is the one and only true message of hope. There is a lesson—and hope—in the Afghanistan catastrophe, if only we will learn it.