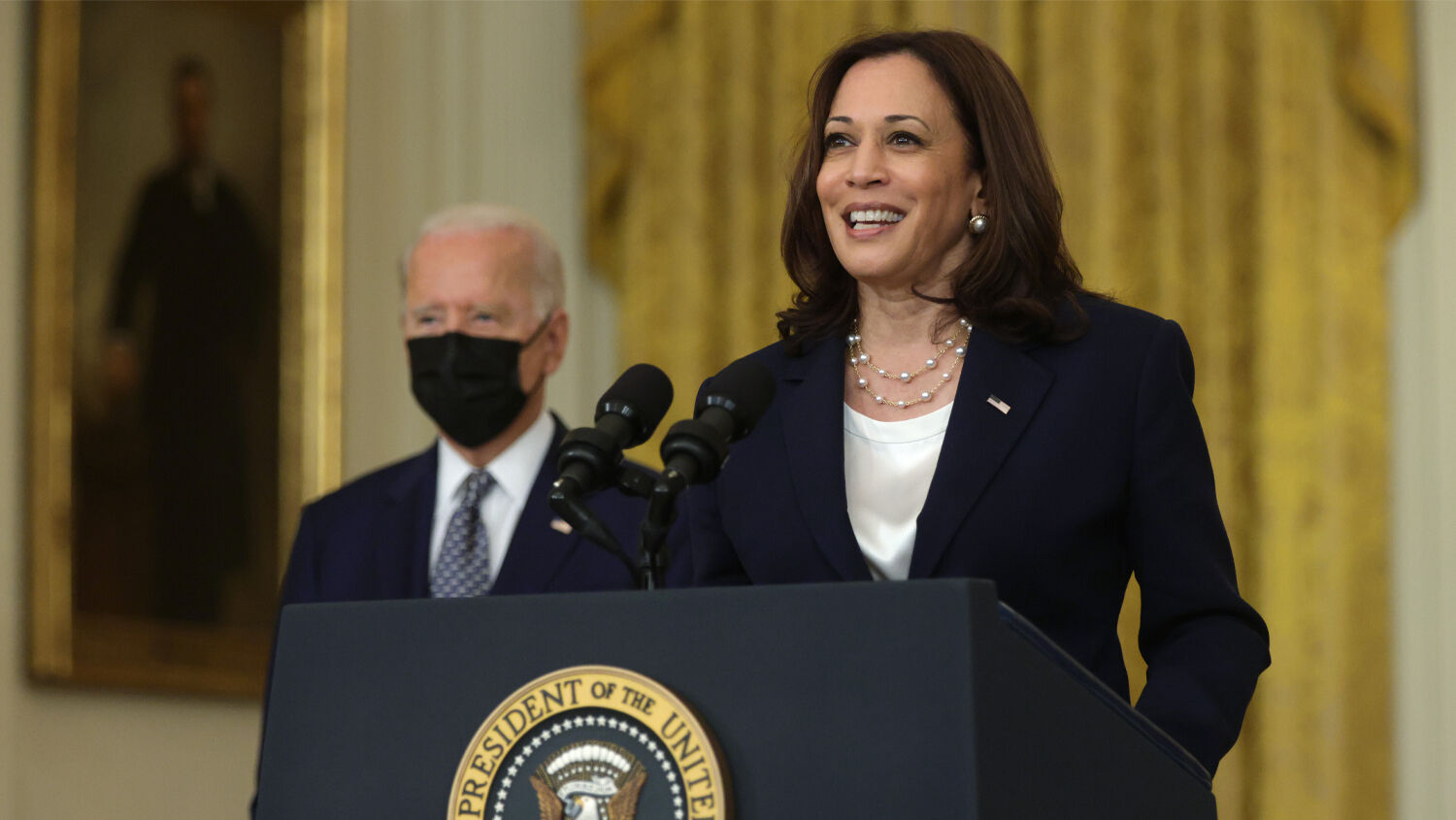 U.S. Vice President Kamala Harris speaks as President Joe Biden listens during an event on Senate passage of the Infrastructure Investment and Jobs Act in the East Room of the White House August 10 in Washington, D.C.
Alex Wong/Getty Images

The agreement is a Trojan horse for the Green New Deal.

The United States Senate passed the $1.2 trillion bipartisan infrastructure deal this week. The 2,700-page bill had the backing of 19 Republicans, including Senate Minority Leader Mitch McConnell. The group voted to end the debate on the bill early to allow quicker passage.

The Republicans supporting the bill are claiming a victory, as the Infrastructure Investment and Jobs Act is a greatly reduced version of the original $3.5 trillion budget proposed by the Biden administration. Republican supporters claim Biden’s plans for “human infrastructure” spending to expand climate change actions, education, child care and medicare benefits are mostly gone from the bill. But the Democrats are rushing the bill through the Senate because this is only the first step in their plan to spend trillions of dollars.

The bill is actually a Trojan horse for the agenda of the radical left to transform America.

The details of the bill reveal that the Infrastructure Investment and Jobs Act title is deceptive. Despite claiming to be bipartisan, key Republican supporters of the bill happen to have funding for special projects in their districts, such as $50 billion for a dam in Sen. Mitt Romney’s district and money to repair the Alaska Highway in Sen. Lisa Murkowski’s district.

Below are some highlights from the pending bill:

The bill includes sections on the “promotion of women in the trucking workforce,” designing motor vehicles to measure blood alcohol levels before driving, and safety research on limousines.

Although many of Joe Biden’s original climate change and social programs were not included, the Republicans compromised enough to allow billions for programs resembling the Green New Deal. It is the first trillion-dollar step toward radically transforming the United States’ economy. The Wall Street Journal called it “a major down payment on President Biden’s Green New Deal.”

President Donald Trump issued a statement, saying: “[T]his is not an infrastructure bill; this is the beginning of the Green New Deal.”

The Green New Deal was radical legislation put forward by Congresswoman Alexandria Ocasio-Cortez in 2019 that aimed to make the U.S. economy 100 percent reliant on “clean” energy, eliminate poverty, change the diet of Americans to reduce the number of cows, and implement more public ownership of companies. The idea of the bill was favored by many radical liberals but rejected by conservative Republicans, especially by President Trump.

The Green New Deal would mean the collapse of many of the key industries that give the U.S. its economic power. It would also commit America to relying on unproved and unreliable clean energy technology. The Green New Deal was shrouded in climate change language, but was a bid to legislate the Communist transformation of America. That is the real goal of the radical left and their climate change agenda.

Such a piece of legislation would be very difficult to pass transparently. Instead, radical lawmakers hide the agenda into other legislation, such as in the latest Infrastructure Act. This is hardly new: President Obama stuffed $90 billion of investment in clean energy into the 2009 stimulus act. It is easy to hide such policies when the legal document is thousands of pages long and Congress votes on it before even reading through the contents.

Billions of dollars are about to be authorized to begin moving this radical agenda forward. But the Infrastructure Investment and Job Act is actually a Trojan horse for far worse legislation. The bill is paving the way for the passing of the Democrats’ radical $3.5 billion infrastructure plan.

The bipartisan infrastructure bill is part one of a two-phase plan to invest trillions of dollars to transform America. The Democrats made the infrastructure bill “bipartisan” and were willing to “compromise” to smooth the way for phase two, which does not require Republican approval.

This $3.5 trillion “Build Back Better” program devised by the Biden administration was agreed upon in a closed-door negotiation between the White House and the Democratic budget committee. cnbc reported that the agreement had the following:

The bill also contains money for clean energy programs, many of which were cut from the bipartisan infrastructure deal during earlier negotiations with Republicans.

These include tax incentives for clean energy and electric vehicles, a Civilian Climate Corps program for young people and energy-efficient building weatherization and electrification projects.

The details of how long the programs will last, and how many billions will be allocated to each program, have not yet been released. But based on how glutted the infrastructure bill was with climate change programs, this agreement may well bring out part two of the Green New Deal. It threatens to massively expand dependence on government social programs and aggressively push for the transformation of the American economy from fossil fuels to “clean energy.”

This is the closest the radical left has gotten to achieving its goal of transforming America’s economy.

Then there is the problem on how to fund this radical agenda. Only $650 billion is preapproved funds. The rest will need to be financed somehow. One of the ideas by President Biden is to raise corporate income tax from 21 percent to 28 percent. Other methods include gathering unused covid relief money, using the money generated by the various programs, and asking the Internal Revenue Service to be more strict in enforcing tax laws. However, none of these ideas come close to raising $4 trillion. In reality it will be financed through higher taxes, or the government will need to print money to fund its own budget.

This saga highlights how broken mankind’s system of government is. Mankind has proved it is utterly incapable of ruling itself.

But the Bible promises that a better government is coming soon.

All of the present troubles in this world are leading to the return of Jesus Christ. Mankind has no solutions to the troubles consuming our nations. The only solution is for Christ to return and bring a new government. Herbert W. Armstrong explained what the Bible teaches on this wonderful future in The Wonderful World Tomorrow—What It Will Be Like:

The glorified Christ—coming in all the splendor, the supernatural power and the glory of God Almighty—coming to save mankind alive—coming to stop escalating wars, nuclear mass destruction, human pain and suffering—coming to usher in peace, abundant well-being, happiness and joy for all mankind. …

There will be no incompetent and selfishly ambitious politicians seeking to get their covetous hands on the throttle of government power by the deceptive political methods of this world. Today people are asked to vote into office men they know little about—men whose qualifications are largely misrepresented. In the soon-coming government of God, every official placed in authority shall have been tried and tested, trained, experienced and qualified, by God’s qualifications

This government will be led by the Family of God! There will be no 2,700-page infrastructure bills in the World Tomorrow. The Bible provides a lot of details on God’s infrastructure deal in the future. Mr. Armstrong wrote:

Another tremendous project on the worldwide international level will be that of rebuilding the waste places, and the construction of whatever really great and large buildings or structures Christ will require for the world He will create. “And they shall build the old wastes, they shall raise up the former desolations, and they shall repair the waste cities, the desolations of many generations” (Isaiah 61:4).

God will supernaturally change the climate, lower sea levels and flatten mountains to yield more arable land for mankind (Isaiah 35:6-7; 41:14-20). God will ensure roads, bridges, railways and power stations are all built on a godly pattern. The Prophet Isaiah says there will be a major highway between Israel, Assyria and Egypt (Isaiah 19:23-25). Men living during this time will be undertaking such incredible engineering projects that it will make our modern achievements look like foolishness. “God describes a wonderful era of discovery and invention in the World Tomorrow—major portions of the Earth reclaimed and put to productive use,” Mr. Armstrong added.

How will these vast rebuilding projects be financed? It will not be through complicated tax schemes, dishonest methods, or printing money, but through simple obedience to God’s law. Mr. Armstrong continued:

God says the wealth of the world will be centered in Jerusalem, and that the vast rebuilding programs, rehabilitation processes and new-age pioneering that begin will be backed by that wealth. …

In God’s abundant government people will buy only what they need, when they can afford it, when they have the cash to pay for it. No more interest. And no more taxes.

But the tithing system will be universal.

Today’s governments demand up to 40, 50 and even 90 percent in inheritance taxes, income taxes, hidden taxes; federal, state, county, school board and city taxes.

But God requires only 10 percent. And out of that 10 percent will be financed the entire governmental, educational and spiritual leadership of the whole Earth.

There will be universal prosperity and happiness for all families, races, nations and peoples. All of the problems we face today will be solved. It will not happen all at once. It will take a lot of work and time to build this new world, but it will happen. Mr. Armstrong described:

What a fabulous picture!

This is the government we all want and need. Do you want to live in this kind of a world? To find out more about this coming utopia, and how you can be a part of it, please read Mr. Armstrong’s free booklet The Wonderful World Tomorrow—What It Will Be Like.