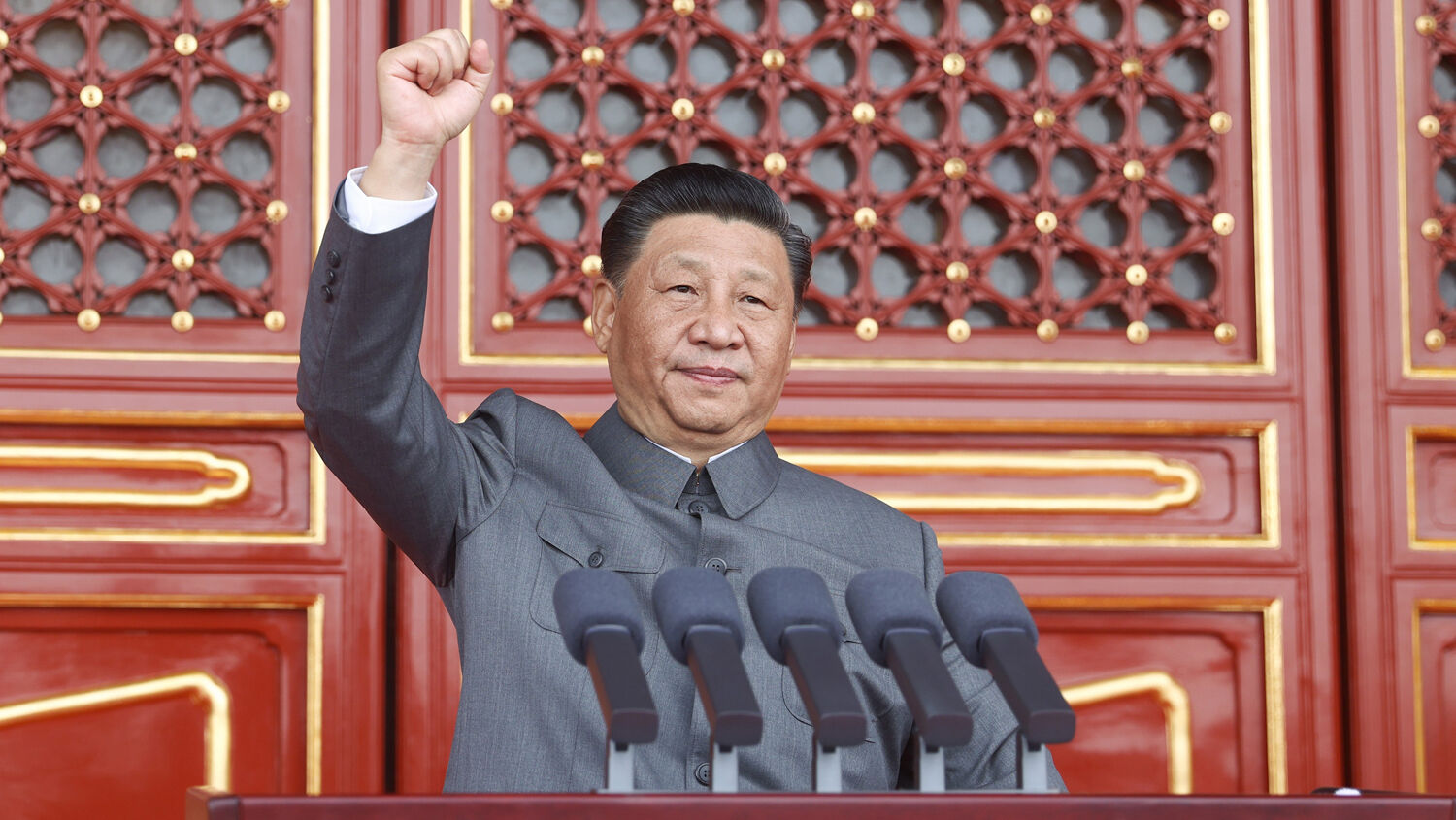 Xi Jinping, general secretary of the Communist Party of China CPC Central Committee, Chinese president and chairman of the Central Military Commission, delivers an important speech at a ceremony marking the 100th anniversary of the founding of the CPC in Beijing, capital of China, July 1, 2021.
Ju Peng/Xinhua via Getty Images

Chinese President Xi Jinping called for solidarity against the United States in a summit with 500 representatives from 160 countries on July 1.

Xi made clear that he refuses to be lectured by the West. “The Chinese people will never allow foreign forces to bully, oppress or enslave us,” he said. “Whoever nurses delusions of doing that will crack their heads and spill blood on the Great Wall of steel built from the flesh and blood of 1.4 billion Chinese people.” Under Joe Biden, the U.S. has urged European nations and Japan to take a tougher stance against China. Prior to Biden, Donald Trump operated with a tough America First policy that led to a trade war with China. These world powers are clearly at odds. The Bible reveals how it will end.

“The speech was laden with symbols intended to show that China and its ruling party would not tolerate foreign obstruction on the country’s path to becoming a superpower,” the New York Times reported on July 1.

One recent example shows what kind of pressure the U.S. has been exerting to hinder China’s rise.

In 2018, the Dutch government gave asml, one of the global leaders in computer chip manufacturing, a license to sell its most advanced machine to a Chinese customer. The U.S. used its influence in the global financial system to block it. “The pressure appears to have worked. Shortly after the White House visit, the Dutch government decided not to renew asml’s export license, and the $150 million machine has not been shipped,” Reuters wrote.

The asml machine manufactures the smallest, most modern semiconductor chips in the most effective way. China already has vast supplies of raw materials needed to produce those chips and exports them around the world. But if China were to have the technology needed for the production of these chips, it would have an immense market advantage. It could use this advantage to limit its rare earth exports and thus further increase its market advantage. It could also make its exports dependent “on the loyalty of its customers and on Western states looking the other way at its numerous human rights violations,” Germany’s Bild.de noted.

If China could loosen itself from this and other constraints holding it back, it would become almost unstoppable.

To achieve this goal, China is calling for an alliance against the U.S., rallying support from North Korea, Serbia, Burkina Faso, Zimbabwe, Cuba and Russia. “Together, we must oppose all acts of unilateralism in the name of multilateralism, hegemony and power politics,” President Xi said at the virtual conference. He called for “building a community with a shared future for mankind” and urged rejection of any country that pursues “technology blockades” and “development decoupling.”

“Looking from the angle of ‘My Country First,’ the world is narrow and crowded, and often full of fierce competition,” Xi warned. For this reason he called for an alliance against the U.S.

Isaiah 23 warns of such an alliance. “The burden of Tyre. Howl, ye ships of Tarshish; for it is laid waste, so that there is no house, no entering in: from the land of Chittim it is revealed to them. … And by great waters the seed of Sihor, the harvest of the river, is her revenue; and she is a mart of nations” (verses 1, 3). In his booklet Isaiah’s End-Time Vision, Trumpet editor in chief Gerald Flurry explains that “Chittim (verse 1; biblical Kittim—Genesis 10:4) gave birth to the land of Chaldee, or southern China. China and Japan were prophesied to be powerful nations in this end time.”

Isaiah 23 reveals that China is prophesied to play a leading role in a trade alliance that excludes modern-day Israel, primarily referring to the U.S. and Britain. But while China will play an important role, there is another power leading this alliance. Mr. Flurry writes that “the Bible refers to Tyre (and its allies Zidon, etc) as the commercial center of this European power.”

Daniel 8:23-25 warn of a strongman who will lead this alliance. This prophecy had a historic fulfillment, but the book of Daniel is for the end time, the days we are now living. This leader will “magnify himself in his heart, and by peace shall destroy many.” Barnes’ Notes on the Bible explains: “It would seem to mean that he would endeavor to produce the impression that he was coming in peace; that he pretended friendship, and designed to keep those whom he meant to invade and destroy in a state of false security, so that he might descend upon them unawares.”

Today, Germany and the European Union present themselves as allies of the U.S. despite frequent animosities. Yet the Bible warns of Germany’s deceit. Germany will betray the U.S. in a destructive alliance with China. The small example of chip manufacturing shows how destructive an alliance between Europe and China could be.

To understand how this will unfold, read “The Great Mart.” Also request a free copy of Mr. Flurry’s book Ezekiel—The End-Time Prophet. In this book, Mr. Flurry outlines the detailed prophecies that speak of our time and shows how many of them are fulfilled before our eyes.