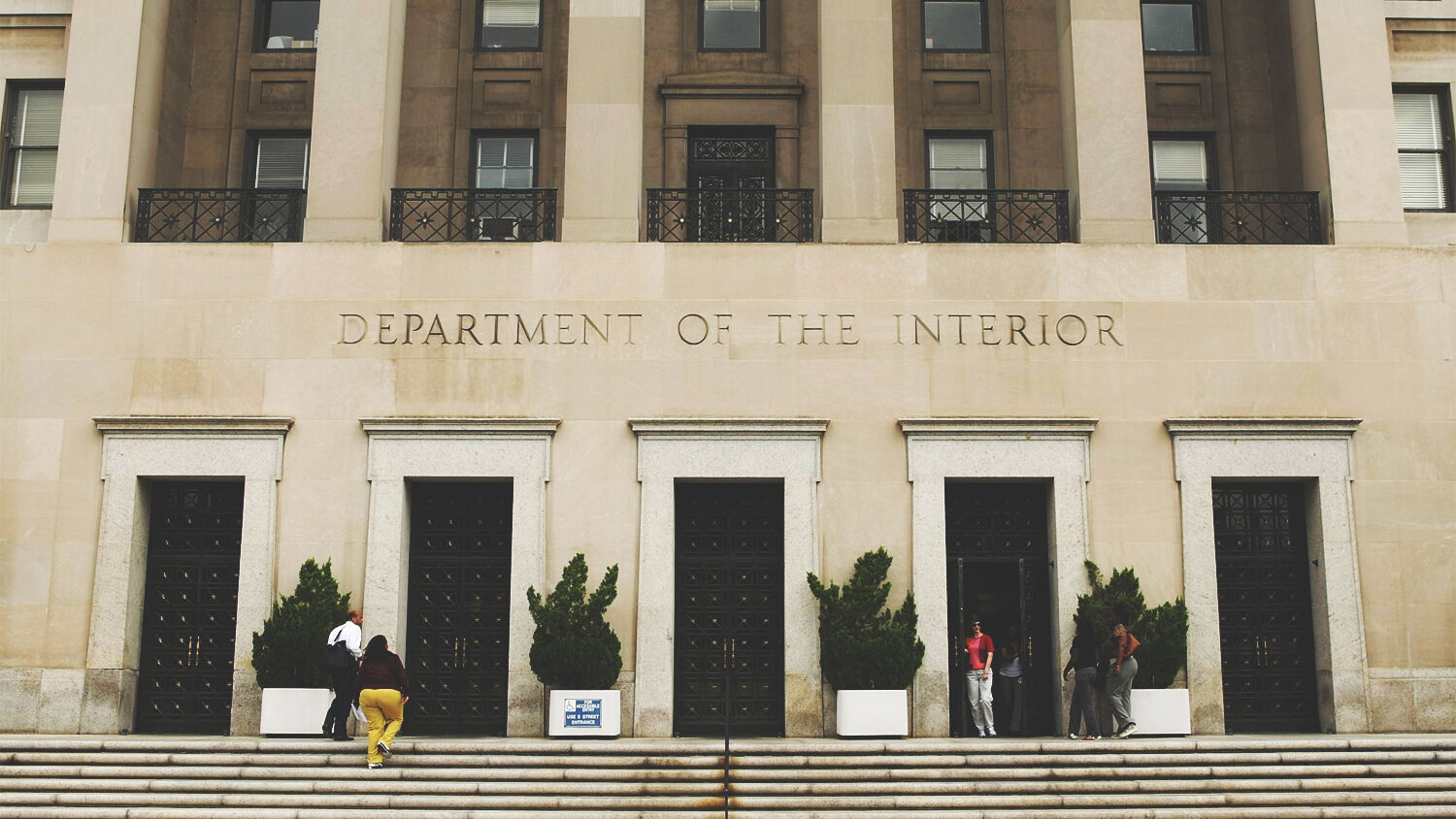 An exterior view of the U.S. Department of the Interior in Washington, D.C.
Alex Wong/Getty Images

An eco-terrorist may soon be in charge of America’s national forests.

For example, when political commentator Glenn Beck outed President Barack Obama’s Special Adviser for Green Jobs Van Jones as a former Communist, Jones resigned amid controversy. But when New Zealand author Trevor Loudon outed Joe Biden’s secretary of the interior as a militant radical with deep ties to the Communist Party usa, almost no one paid attention. Communist Party leader John Bachtell wrote a gushing piece in the Communist Party usa publication People’s World about how Secretary Deb Haaland was on track to make history as America’s first Native American cabinet secretary. But his piece did not draw attention to the role Communist Party member Judith LeBlanc played in pressuring Biden to pick Haaland as his nominee to run the Department of the Interior.

Now, instead of launching initiatives to manage natural resources, Haaland is calling for an investigation to “uncover the truth” about governmental policies that forced past generations of Amerindians to assimilate into U.S. society. “The Interior Department will address the intergenerational impact of Indian boarding schools to shed light on the unspoken traumas of the past, no matter how hard it will be,” she said. “I know that this process will be long and difficult. I know that this process will be painful. It won’t undo the heartbreak and loss we feel. But only by acknowledging the past can we work toward a future that we’re all proud to embrace.”

Secretary Haaland is also spearheading a Biden administration initiative to ban fracking on public lands. While still a congresswoman from New Mexico, Haaland joined pipeline protesters in North Dakota, saying that the Keystone XL pipeline violated the rights of the Standing Rock Sioux Tribe and other Indian nations. After Joe Biden canceled the Keystone XL pipeline via executive action, Haaland suspended oil and gas leases in the Arctic National Wildlife Refuge. Since federal lands account for 13 percent of America’s natural gas production, oil and gas bans could result in 1 million job losses by 2022, according to the American Petroleum Institute.

Advocating for Amerindian tribal autonomy and sabotaging oil and natural gas production is a radical new direction for the U.S. government. Shockingly, the radical Haaland may not be the farthest-left activist in the Department of the Interior for much longer. On April 22, Biden nominated Tracy Stone-Manning to be the next director of the Bureau of Land Management (an agency within the Department of Interior).

Stone-Manning is still in her Senate confirmation hearing, but more than 100 organizations have written to Senate Majority Leader Chuck Schumer asking that she be confirmed right away.

This is concerning as Stone-Manning is an eco-terrorist. In 1989, when Stone-Manning was a 23-year-old graduate student at the University of Montana, she was a member of the eco-terrorist group Earth First! As an editor of one of this group’s publications, she wrote articles attacking congressionally mandated logging on federal lands. She also helped a group of friends drive 500 pounds of spikes into a stand of trees so that loggers could not cut them down without being killed or seriously injured. A mill worker lost part of his jaw in a separate incident after a band saw shattered when it struck an 11-inch tree spike.

Stone-Manning testified in a criminal trial against her former roommate and was granted immunity from federal prosecution to avoid serving jail time. Her roommate went on to spend 17 months in prison.

Many loggers and mill workers were shocked when Biden nominated Stone-Manning, but considering that the Senate confirmed Deb Haaland as secretary of the Interior, there is a good chance it will select Stone-Manning as director of the Bureau of Land Management. If this happens, Stone-Manning may be able to sabotage logging efforts through legal means (instead of through terrorism), similar to how Haaland can sabotage oil and natural gas production through lawful means (instead of through tribal protests).

Stone-Manning’s 1992 graduate thesis, titled “Into the Heart of the Beast: A Case for Environmental Advertising,” argues that allowing cattle to graze on public lands destroys the country and allowing people to have more than two children destroys the planet. One ad featured shows a toddler with the caption: “Can you find the environmental hazard in this photo? That’s right, it’s the cute baby. Americans believe overpopulation is only a problem somewhere else in the world. But it’s a problem here too. When we overpopulate, the Earth notices it more. Stop at two. It could be the best thing you do for the planet.”

It appears the Department of the Interior is now anti-oil, anti-logging, anti-cattle and anti-children. Such positions have nothing to do with environmental stewardship or natural resources management, but they have everything to do with an anti-human agenda that seeks to return North America to its natural state.

This plan is decidedly unbiblical. “The point cannot be too strongly made that man has managed to besmirch, pollute, desecrate and destroy nearly everything he had touched,” reads the December 1970 issue of Your Living Environment, produced by the agriculture department of Ambassador College. “Indeed, total mismanagement of our environment has been a dominant theme throughout all of history. A solution must be found to this suicidal course of action. But does that solution lie in leaving our surroundings in their most natural state? No, it decidedly does not! Mismanagement must be replaced, not with no management, but with correct, law-abiding management! … While informing the Israelites that He would drive out the Canaanites for them, God added this most enlightening point: ‘I will not drive them out from before you in one year; lest the land become desolate, and the beast of the field multiply against you. By little and little will I drive them from before you, until you be increased and inherit the land (Exodus 23:29, 30). God obviously felt that even Canaanite rule over His Promised Land was more acceptable than no people there at all!”

Members of eco-terrorist groups like Earth First! are willing to kill to keep people from harvesting timber. Still, God created trees for humans to harvest, like He created oil for humans to burn and grass for cattle to eat. Passages like Deuteronomy 33:13-17 show that “the precious fruits brought forth by the sun” (aka plants) and “the chief things of the ancient mountains” (aka minerals) were promised as blessings to the descendants of the ancient Israelite tribes Ephraim and Manasseh. Yet the radical Communists taking over the Department of the Interior despise these blessings. They are doing everything they can to make the land desolate.

The late Herbert W. Armstrong explained in his book The United States and Britain in Prophecy that the peoples who settled the U.S. and Britain descended from the ancient Israelites. God made an unconditional promise to Abraham to give his descendants great material wealth, and He kept this promise by providing America and Britain nearly three fourths of the world’s usable resources during the peak of their power.

But God did not promise to keep blessing these nations if they turned away from Him.

A prophecy in Leviticus 26 warned that if the Israelites came to despise God’s law, He would take away their blessings. In a January 1949 Plain Truth article, “The Plain Truth About Communism,” Mr. Armstrong specified that communism is a tool of the devil to blot out America’s blessings. “The real goal of the Communist plotters is the violent overthrow of the United States and the British Empire. Why? We are the real ‘capitalist nations. We possess nearly three-fourths of all the world’s ‘capital’—its developed and usable resources and wealth. … The plain truth, known by so few, is that we possess greater wealth and national resources than any other nation ever did because Almighty God gave us this wealth in fulfillment of His birthright promise to Abraham, Isaac and Jacob! And communism is the devil’s effort, through his demon-inspired human tools, to take from us this greatest national and economic blessing God ever conferred on any people! And since this blessing from God is the world’s ‘capital’ atheistic communism shouts, ‘Down with capitalism.’”

God has blessed Americans with the resources to be prosperous and independent, but instead of being grateful for their blessings, they have become ashamed of them. They lack the will to use their power, so other nations are filling the power vacuum left by far-left radicals doing everything they can to blot out the name of Israel!

To learn more about how Ezekiel and other biblical authors wrote about the radical left’s assault on America’s Judeo-Christian heritage, please read “Communism in America Today,” by Gerald Flurry.