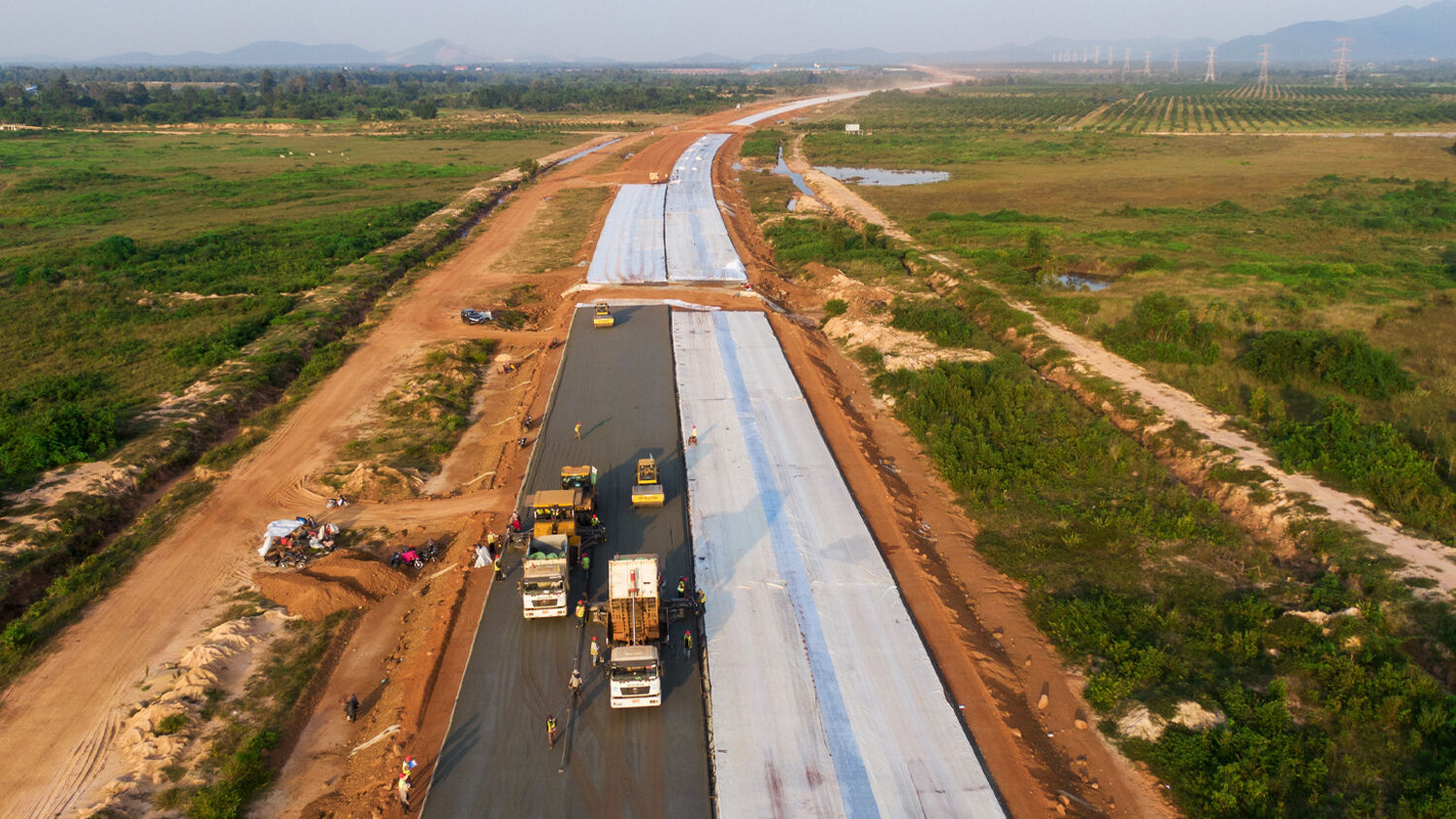 ‘This expressway is another testament to the unbreakable ironclad friendship between Cambodia and China.’

Cambodia announced on June 21 that China’s construction of the Phnom Penh-Sihanoukville Expressway will be finished ahead of schedule, marking the latest step in Beijing’s gradual colonization of the nation.

China began the $2 billion project in March 2019, with construction being carried out by its state-owned China Road and Bridge Corp. The road’s purpose is to connect Cambodia’s capital city of Phnom Penh to the coastal city of Preah Sihanouk in the southwest. Since it links the nation’s most populous city to its largest seaport, the expressway is expected to significantly boost Cambodia’s economic growth.

The 120-mile road was originally scheduled to be completed in March 2023. But Cambodian Minister of Public Works and Transport Sun Chanthol said on Monday that it is on track to be finished by September 2022.

He emphasized that the four-lane expressway will be the nation’s first. And it will let vehicles travel over 60 miles per hour, which will slash travel time from Phnom Penh to Preah Sihanouk from five hours down to two hours.

#China Road and Bridge Corporation will be able to finish #Cambodia-China expressway cooperation project by Sep. 2022, #Cambodian Minister of Public Works and Transport Sun Chanthol said. Phnom Penh-Sihanoukville Expressway will be the 1st ever expressway in Cambodia. #BRI pic.twitter.com/9D1ac4msUy

Nin Saphon, chairwoman of Cambodia’s Commission on Public Works, Industry, Mines, Energy, Commerce, and Land Management, said the project highlights how robust the China-Cambodia relationship has become. “This expressway is another testament to the unbreakable ironclad friendship between Cambodia and China.”

The expressway is one of several Chinese projects in Cambodia under the framework of the Belt and Road Initiative. But this one has particular significance because it works hand-in-glove with China’s increasing control over Cambodia’s naval installations in Preah Sihanouk.

In July 2019, the Wall Street Journal broke the news about Cambodia granting China’s military exclusive rights for 30 years to a 62-acre section of the Ream Naval Base in Preah Sihanouk. The agreement said the Chinese military would be permitted to station soldiers, weaponry and warships at the base.

Then last October, satellite imagery showed that Cambodian officials had demolished an American-built facility at Ream, apparently to make way for the Chinese to move in. “The country’s government is preparing to hand the base over to China,” Drake Long, an Asia-Pacific Fellow for Young Professionals in Foreign Policy, wrote for the Diplomat at the time.

Long said establishing a naval presence at Ream could be viewed as Beijing’s “most naked attempt at bolstering China’s military position since its construction of man-made island fortresses atop reefs and rocks in the South China Sea.”

The ability to launch military operations from the naval base will give a major boost to China’s ability to enforce claims of sovereignty over almost the entire South China Sea. A military presence on Cambodia’s coast would also increase China’s influence over the strategically vital Strait of Malacca, through which 90 percent of South China Sea crude oil shipments transit.

And now the Phnom Penh-Sihanoukville Expressway will further tighten China’s grip on the key area and help the Chinese to better link their multiplying assets in Phnom Penh with their military installations on the coast.

Meanwhile, just across the bay from Ream, a state-run Chinese firm is building a $3.5 billion airport. Upon opening later this year, the location will be Cambodia’s largest airport, considerably larger than the international airport in Phnom Penh. China claims the Dara Sakor airport is meant for commercial use only. But satellite imagery shows that its 11,000-foot runway is longer than those required for commercial aircraft and of a suitable length for China’s long-range fighter jets, surveillance planes and possibly even its military transport aircraft.

Drake Long said the combination of the naval facility at Ream and the airport in Dara Sakor makes China’s inroads into Cambodia significant. “After considering the two in tandem,” he wrote, “one can see just how significant China’s push for a military footprint in mainland Southeast Asia would be for the region.”

The Japan Times noted that China’s foothold in Cambodia “would mark a critical moment in Southeast Asian security and potentially transform the regional security outlook.”

This transformation is partly because, since 2014, China has also constructed and militarized seven artificial islands in the South China Sea, mainly in the Spratly and Paracel chains. Adding a military position in Cambodia to China’s existing presence on these islands would give China a triangular perimeter around the entirety of mainland Southeast Asia.

Long agrees with this assessment. He wrote: “China’s aggressive surveillance flights in the South China Sea will only get more provocative if planes can take off from Cambodian soil, forcing nearby countries to reexamine their political will to resist Beijing’s coercion and weigh the benefits of a rapprochement instead.”

United States officials have been taken aback by Cambodia’s decision to let China establish such a deep presence in the nation, largely because Washington has invested considerable resources over the years into building up Cambodia and working to win it over as a partner country.

The U.S. has pumped billions of dollars into Cambodia to pay for military assistance, education, poverty reduction and economic growth. It has helped train the Cambodian military and built defense installations there—including the one at Ream Naval Base that Cambodia razed to make way for China.

In spite of all the spending and overtures, Cambodia is snubbing the U.S. and giving China invaluable access to its territory.

One worrying way China’s presence there could undermine U.S. power is in the event of an attack on U.S. allies and partners in the region, such as Japan, the Philippines, South Korea or Taiwan. Should one of these countries come under Chinese attack, some of the American forces charged with defending it would ordinarily cross through the Strait of Malacca. But by using forces based in Cambodia, China could block or seriously complicate such a U.S. passage.

China’s deepening foothold in Cambodia represents the latest increase in China’s capacity to project military power around the world at the expense of U.S might. This development simultaneously advances three trends that are significant in the context of Bible prophecy: the advent of “the times of the Gentiles,” the assembling of “the kings of the east,” and the decline of the United States.

Luke 21:24 speaks of a period in the modern era called “the times of the Gentiles.”

In his February 2020 article “The Climax of Man’s Rule Over Man,” Trumpet editor in chief Gerald Flurry discussed this epoch, explaining that the term Gentile refers to non-Israelite peoples. Israelites make up “a lot more than the little nation in the Middle East,” he wrote, adding that in end-time prophecy, Israel refers to modern-day America and Britain primarily. (For a complete explanation, order your free copy of The United States and Britain in Prophecy.)

“Once you understand who Israel is,” Mr. Flurry wrote, “then you can see how the Gentiles—the non-Israelite peoples—have started to take charge of the world already. While there are many Gentile nations around today, when this prophecy is completely fulfilled there will be two major powers—one revolving around Russia and China, and the other around Germany. Each will have strong allies ….”

When the world is fully in the midst of these “times,” U.S. influence will have dried up. Countries such as China will have filled the power vacuum.

Cambodia’s decision to spurn America and invite China into its territory blows this “catastrophic storm” closer.

Revelation 9:16 discusses an Eastern army that will emerge during the same “Gentile” era. This force will consist of 200 million soldiers. Revelation 16:12 calls this future Asian bloc “the kings of the east,” with the pluralized “kings” indicating a multinational bloc made up of multiple Asian states. Ezekiel 38 provides several details about this military alliance, including the fact that it will be headed by Russia, with China in a position of secondary leadership.

When Asian countries such as Cambodia rally behind China today, they are laying the foundation for “the kings of the east” prophecy to be fulfilled.

The late Herbert W. Armstrong forecast decades ago of the collapse of U.S. power. Just after America’s botched invasion of Cuba in 1961, he put the blame not at the feet of the U.S. military or even the Kennedy administration, but of the American people: “Unless or until the United States as a whole repents and returns to what has become a hollow slogan on its dollars: ‘In God we trust,’ the United States of America has won its last war! [T]he God America has deserted gave it its most humiliating defeat! What does the Cuban debacle mean? It means, Mr. and Mrs. United States, that the handwriting is on your wall!” (Plain Truth, October 1961).

Mr. Armstrong recognized that America was heading for collapse because the people had failed to turn to God. And he made his forecasts with confidence because they are based on Bible prophecy. The Bible includes a specific forecast for the descendants of Israel, which include America. God said that if the people of the nation failed to turn to Him, He would “break the pride of [their] power” (Leviticus 26:19).

In the decades since Mr. Armstrong wrote those words, the American people have hastened their desertion of God. They have calcified their rejection of His law. And in the time since, America has inserted itself into dozens of military altercations. Each of these halfhearted campaigns has drained a little more of the country’s pride in its power.

Luke 21:26 says these various trends will culminate in a time of unprecedented worldwide conflict and suffering when “men’s hearts” will be “failing them for fear.” But the next verse says that the turmoil will conclude with the most revolutionary and transformative event in history: “And then shall they see the Son of man coming in a cloud with power and great glory” (verse 27).

These tragic times of the Gentiles, the outer edges of which the world is already in, will transition directly to Jesus Christ’s return. He will bring in an age of peace and prosperity for the peoples of China, Cambodia and all nations. Regarding this future age of global peace, Isaiah 2:4 says: “[N]ation shall not lift up sword against nation, neither shall they learn war any more.”

To understand more, order your free copy of our booklet Russia and China in Prophecy.