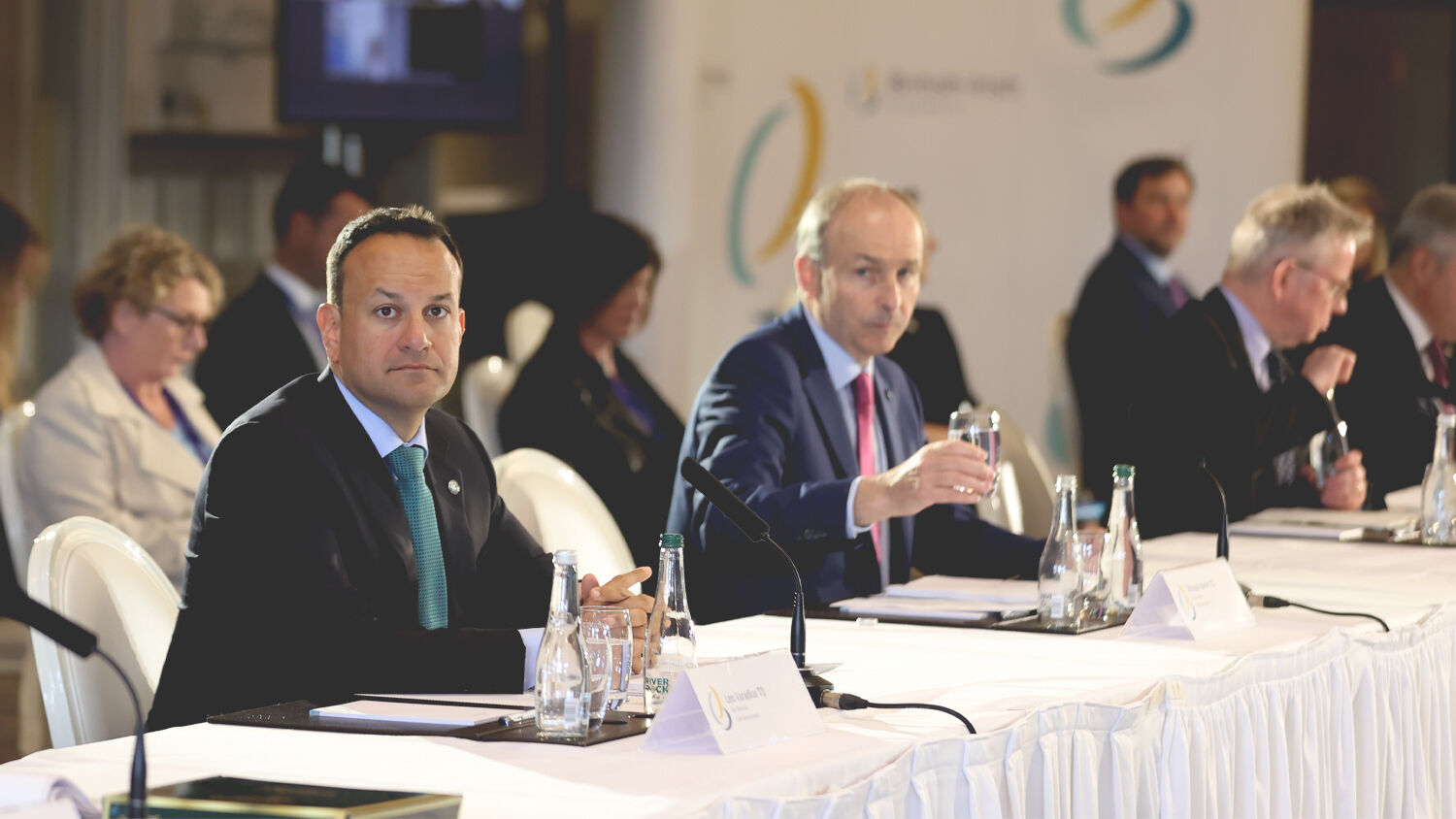 Former Irish Taoiseach (prime minister) Leo Varadkar called on June 15 for the unification of Northern Ireland with the Republic. His comments come as European Union leaders make clear they don’t regard Northern Ireland as part of the United Kingdom and as Northern Ireland struggles through political chaos.

The UK’s four constituent countries are England, Scotland, Wales and Northern Ireland. A majority of voters in the 2016 Brexit referendum voted for the UK in its entirety to leave the EU. But even though Brexit is over and done with (on paper), the EU is trying to suck the UK—or at least parts of it—back in. It’s aiming at the most vulnerable of the four countries: Northern Ireland.

The first provocation came amid the so-called “sausage war.” The UK left the EU in January 2020, but it stayed in Europe’s customs union until December 31 in a “transition period.” Northern Ireland and the Republic of Ireland, an EU member state, don’t have a hard border. This was a part of the Good Friday Agreement of 1998–1999, which put an end to the violence of the Troubles. But the EU is infamous for its strict and picky trade regulations. If Britain wanted to keep the Northern Ireland-EU border soft, Northern Ireland would have to agree to stick to EU standards in agriculture and other industries. That meant a customs border between Northern Ireland and the rest of the UK.

The government in London has already lost most of its authority over Northern Irish laws. A customs border whittles away British sovereignty even more. This dismayed many Northern Irish unionists. But some EU leaders are being particularly provocative.

Britain and the EU are in a spat over meat imports into Northern Ireland. Importing chilled meats, like sausages, is illegal under EU law. The EU has demanded that Britain stop importing chilled meats into Northern Ireland, despite Northern Ireland being British sovereign territory. At the recent G-7 summit in Britain, British Prime Minister Boris Johnson had a spat with EU leaders about this. He asked French President Emmanuel Macron how he would like it if sausages from southern France couldn’t be imported to Paris.

Macron, according to an anonymous British government source, said this was “not a good comparison because Paris and Toulouse are part of the same country.” He was clearly implying that Northern Ireland isn’t part of the UK.

Macron isn’t known for his love of the UK. Last month, he put a naval blockade on the British territory of Jersey. But he’s not the only EU leader poking at Northern Ireland. Varadkar was even more provocative, openly calling for the unification of Ireland.

Varadkar leads the Fine Gael party, which is part of the current governmental coalition. He called the unification of Northern Ireland and the Republic of Ireland “a legitimate political aspiration.”

“Unification must not be the annexation of Northern Ireland,” he said. “It means something more, a new state designed together, a new constitution and one that reflects the diversity of a binational or multinational state in which almost a million people are British.”

The timing of these comments, in the middle of the “sausage war” and the provocative statement from Macron, is interesting.

Not every EU politician is openly challenging British sovereignty over Northern Ireland. But Macron and Varadkar are not no-name figures. They’re highly influential. And one wonders how many other leaders in the EU share their views.

The other option for Britain is to conform to the EU’s agricultural standards. It may seem like a minor concession, but it would put Britain back under the yoke of Brussels’ regulations that Britons wanted escape from in the first place.

Either way, the EU doesn’t want Brexit to happen without Britain giving up something. Even though Brexit is technically supposed to be over and done with.

The EU likes to market itself as “the future of Europe,” a tolerant, peace-loving bloc based on equality and freedom. Instead, Brexit is exposing it as a bully eager for a power grab.

This points to its history: The EU as a whole didn’t form through peace but in the aftermaths of chaos.

The European Coal and Steel Community, precursor to the EU, was formed in the aftermath of World War ii. The EU—especially its most powerful member-state, Germany—took advantage of the Yugoslav Wars of the 1990s to expand its influence eastward. The recent European debt crisis dissolved the financial independence of member states like Greece and Cyprus.

One of the EU’s founding fathers, Jean Monnet, said, “Europe will be forged in crises, and will be the sum of the solutions adopted for those crises.” The history of the EU makes Monnet’s words almost prophetic.

Brexit is the latest of these crises to forge Europe into a global power player.

“Europe will unite and it will become a formidable global dynamo,” wrote Trumpet contributing editor Brad Macdonald in his free book, The Holy Roman Empire in Prophecy. “The unity Europe attains will not be perfect; it will not come about easily or peacefully; and it certainly will not endure. But Europe is going to become a united superpower and a serious, daunting global power. The emergence of this new Europe will have far-reaching and dramatic consequences for us all.”

Losing Northern Ireland would be a blow to the UK. But as big as that would be, the rise of the EU will have more “far-reaching and dramatic consequences” than most people realize.

To learn more, request a free copy of The Holy Roman Empire in Prophecy.