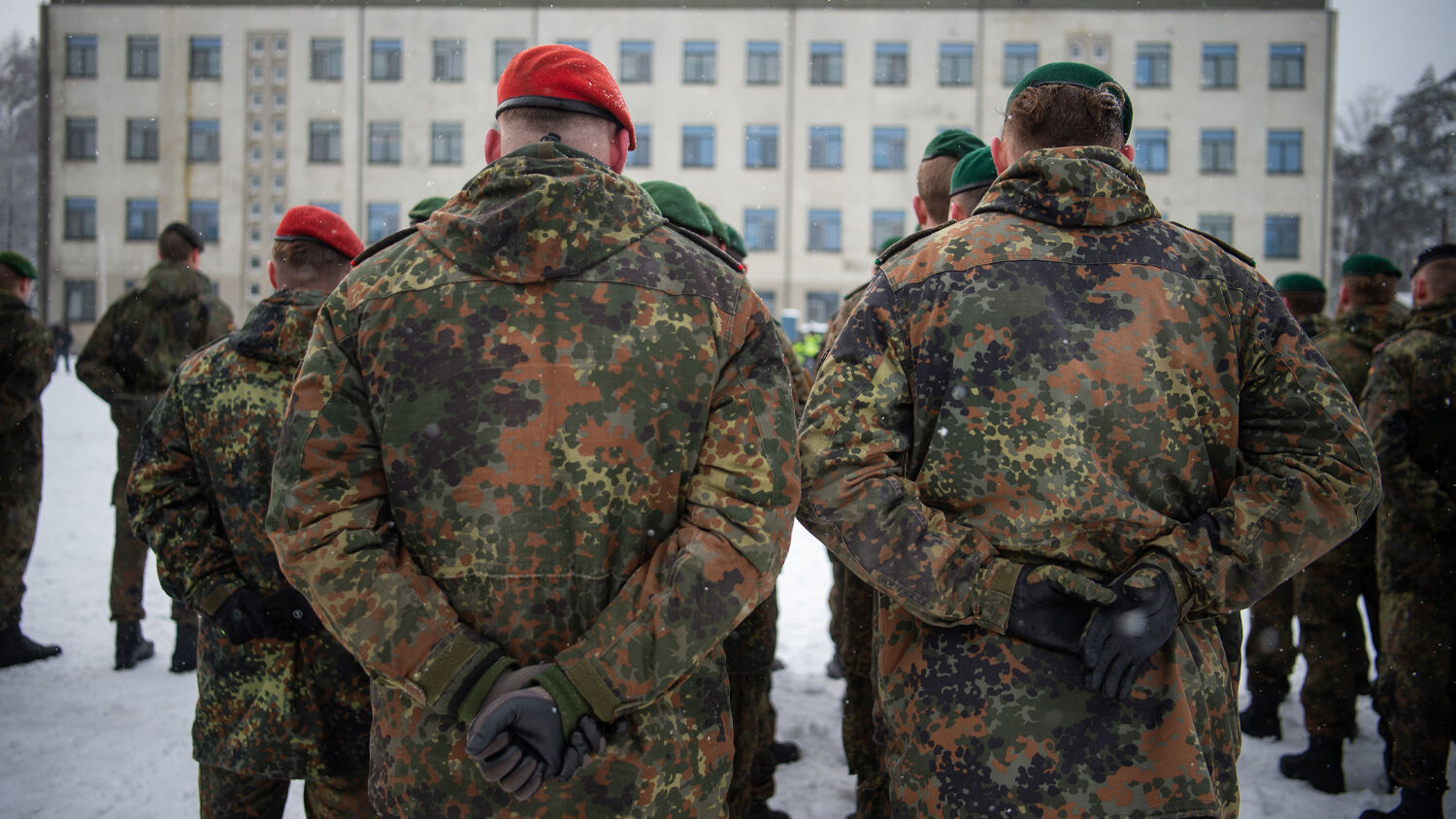 German soldiers stand during a handover roll call at the military base in Rukla, Lithuania.
Arne Immanuel Bänsch/picture alliance/Getty Images

Racism, anti-Semitic tendencies, sexual perversions and führer veneration—these are things the German Bundeswehr fears to be associated with. But German soldiers stationed in Lithuania checkmarked them all. On June 16, it was announced that their service in Lithuania ended in disgrace, not only for them but for the whole military. While the troop faces disbandment, Germany’s military continues to be haunted by its Nazi past.

The Enhanced Forward Presence (efp) mission in Lithuania is part of the North Atlantic Treaty Organization’s deterrence strategy against Russia. Since 2017, hundreds of German soldiers have joined the mission. Their primary responsibility is to train local units in Lithuania and conduct joint exercises to prepare for swift action if a conflict with Russia were to emerge. While their job assignment is away from the homeland, one platoon embodied all the scandals that the Bundeswehr has been plagued with.

Their unacceptable behavior surfaced after Bundeswehr leadership was notified that the military police was investigating the unit. “Even the keywords did not sound good,” Spiegel Online reported on June 15 (Trumpet translation throughout). “The allegations concerned, in part, blatant misconduct by a platoon of a good 30 servicemen and servicewomen stationed in Lithuania. Among them were possible criminal offenses, such as sexual assault, insults with racist slogans, and indications of right-wing extremism in the unit. More scandal potential is hardly possible.”

German Defense Minister Annegret Kramp-Karrenbauer called the allegations “a slap in the face of all those who serve our country.” Kramp-Karrenbauer confirmed Wednesday that the entire platoon would return to Germany “with immediate effect.” The next day, all 30 German soldiers headed home.

The soldiers were accused of “giving offense with racist and anti-Semitic overtones and showing extremist behavior,” a military spokesperson said. “Such behavior is not only inexcusable but brings shame on us all.”

But it is worse than that.

The series of investigations began after hotel staff in Lithuania’s Rukla region alerted the German military police to a vociferous party taking place on April 30. German military sources noted that the police took one of the platoon’s drunken soldiers back to the barracks but no further actions were taken. Further interrogations eventually revealed that individuals within the platoon had sung a birthday serenade for Adolf Hitler on April 20. The incident was allegedly noticed by a superior officer. An internal memo says the soldiers sang the song against the clear orders of a sergeant. Despite their disobedience, he apparently did not report them.

But it doesn’t stop with a few soldiers. Even political leaders sympathize with the Nazi era. In 2017, Alternative für Deutschland leader and former member of the Christian Democratic Union Alexander Gauland said, “If the French are rightly proud of their emperor and the Britons of Nelson and Churchill, we have the right to be proud of the achievements of the German soldiers in two world wars.”

Because Chancellor Angela Merkel’s Christian Democrats publicly oppose these viewpoints, more and more members of the police and military are supporting the far right.

The German people have a long history of warfare. German tribes successfully fought off the Roman Empire in the famous Battle of the Teutoburg Forest in a.d. 9. Centuries later German tribes were able to overthrow Rome. “Through the course of the fifth century, Rome had been ruled, in sequence, by three different Germanic tribes,” our free book The Holy Roman Empire in Prophecy explains. “These tribes didn’t just destroy Rome’s secular leadership; they also overthrew the bishop of Rome and his religion.”

Hitler’s generals honored the history of these Germanic warriors. Hitler himself honored Charlemagne, who “Christianized” Europe, which led to the rise of the “Holy” Roman Empire of the German nation. With the backing of the Catholic Church, this empire fought in the name of religion. Germany has a bloody history of war.

Near the end of World War ii, the Allied forces pledged to end Germany’s military tradition. A mere 10 years later, the German military was allowed to reemerge.

Since that time, Germany has been governed by democratically elected leaders who have been responsible for the denazification of Germany. But even under this leadership, soldiers and high-ranking generals have tolerated or celebrated the military’s Nazi past.

Certainly not everyone in the military shares those sentiments. But even in Hitler’s reich, the extremists started off as the minority—until every dissenting voice was crushed.

The Bible prophesies that Germany will get a political leader who will arouse that military spirit more than ever before. “And in the latter time of their kingdom, when the transgressors are come to the full, a king of fierce countenance, and understanding dark sentences, shall stand up. And his power shall be mighty, but not by his own power: and he shall destroy wonderfully, and shall prosper, and practise, and shall destroy the mighty and the holy people. And through his policy also he shall cause craft to prosper in his hand; and he shall magnify himself in his heart, and by peace shall destroy many” (Daniel 8:23-25).

Bible prophecy speaks in great detail about the future of Germany. The Bible warns of seven successive resurrections of a military power known as the Holy Roman Empire (Revelation 17). History proves that six of those resurrections have come and gone; the sixth being Adolf Hitler’s reich. The fact that some in the military today venerate his legacy shows that another resurrection is near.

“The beast that thou sawest was, and is not; and shall ascend out of the bottomless pit, and go into perdition: and they that dwell on the earth shall wonder, whose names were not written in the book of life from the foundation of the world, when they behold the beast that was, and is not, and yet is” (Revelation 17:8). In his free booklet Prophesy Again, Trumpet editor in chief Gerald Flurry explains that during the Hitler-Mussolini axis, God revealed to the late Herbert W. Armstrong “secrets about this sixth resurrection of the Holy Roman Empire, which ‘was, and is not, and yet is.’” This not only dates this prophecy, but it also shows that once the Nazi movement went underground, it would eventually reemerge once the right leader comes on the scene.

Germany’s militaristic tradition continues. What some German soldiers are trying to hide today will soon be openly tolerated. This tolerance will encourage more to join the movement. Fear will motivate everyone else to join. Soon the minority will grow to be the majority. History is certain to repeat itself. The world ought to take warning from the only source that sounds the alarm—the Holy Bible. Request a free copy of The Holy Roman Empire in Prophecy to learn where events are leading.