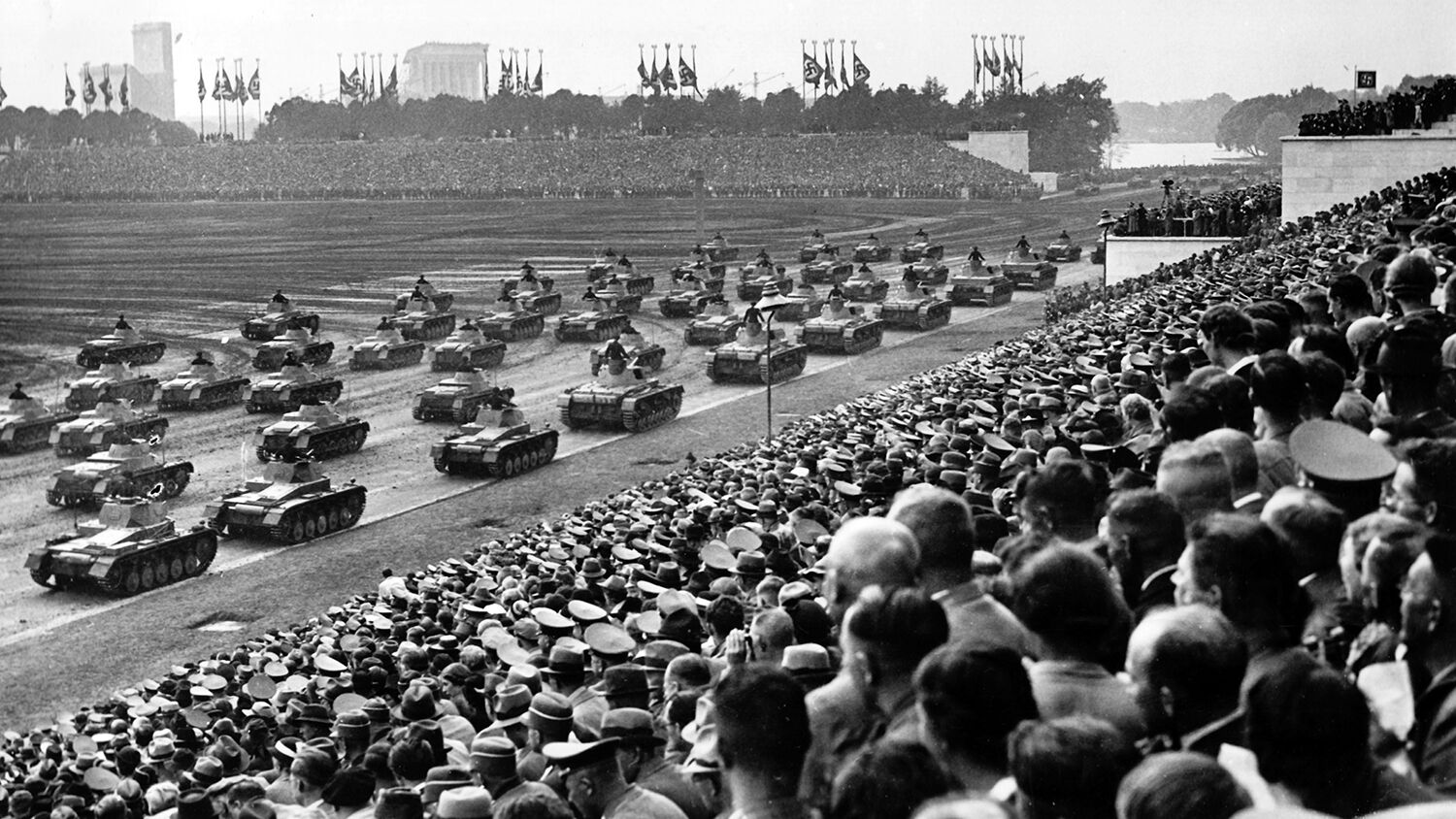 A tank parade of the German Wehrmacht passes the grandstand on Zeppelin Field at the Nazi Party rally grounds in Nuremberg.
Getty Images

Germany’s military needs to return to its historic traditions. The nation must stiffen its spine, and it must have nuclear weapons. That’s the conclusion of a new book by Col. Richard Drexl (Ret.) and Josef Kraus, a long-standing member of the Germany Ministry of Defenses Internal Leadership Advisory Council.

This kind of rhetoric typically comes from Germany’s far right, including the Alternative für Deutschland party. Now it is being taken up by senior military officials.

In their book Not Even Contingently Ready for Defense—for which former German Defense Minister Prof. Dr. Rupert Scholz wrote the foreword—Colonel Drexl and Kraus discuss some of the problems with the German Army.

The authors state that if Germany doesn’t “want to be a mere recipient of orders from the U.S.-Americans,” it needs to be closely connected to “a second-strike nuclear-weapon state.” The book argues that this means close cooperation with France, the creation of a crisis intervention force, and a European security structure that has shared access to nuclear arsenals.

The main idea behind the demand is that Europe cannot trust America, and it must therefore provide its own nuclear deterrence. Over the years, many military experts have made similar demands based on the same argument. Others doubt that France would share its nuclear arsenal and argue that Germany should become not only Europe’s strongest conventional military force, but also an independent nuclear power. Germany has the ability to do just that and could thus lead Europe to become a powerful military power. Why then has this not yet happened?

Drexl and Kraus claim to have the answer. They write that the army’s main problem has less to do with “equipment deficiencies,” and more to do with the “reeducation of Germans after 1945.”

“Auschwitz,” they claim, “was stylized as virtually the sole founding myth of the Federal Republic of Germany.” The country’s past guilt led to a “guilt complex” that permanently prevented Germany from fulfilling its national interests.

The authors’ solution is to uphold military traditions, claiming that National Socialism was a problem caused by politicians, not the army. They claim it was a mistake to “cut off almost all traditions from 300 years of German military history.” The most recent Bundeswehr tradition decree of 2018 eliminated all “heroic role models” for the army today, they claim. Their criticism is a direct attack against then Defense Minister Ursula von der Leyen, who was recently appointed as European Commission president.

The new directive for the German military is the first since 1982. Despite the bravery of individual German soldiers in the past, neither the Nazi-era Wehrmacht nor the East German People’s Army could “as institutions be included in our canon of traditions,” von der Leyen said.

In “German Militancy,” German-Foreign-Policy.com summarizes the authors’ demands and shows how these calls have long circulated in national-conservative circles. The AfD is now “increasingly becoming the mouthpiece of this movement” and of the military members that are associated with it, the article claims.

In 2017, AfD leader Alexander Gauland said, “If the French are rightly proud of their emperor and the Britons of Nelson and Churchill, we have the right to be proud of the achievements of the German soldiers in two world wars.”

Another influential AfD leader, Björn Höcke, told a cheering crowd in January 2017 that Germany should be proud of its history and make a “180-degree reversal on the politics of remembrance.” “German history is handled as rotten and made to look ridiculous,” he said, lamenting that Germans are “the only people in the world to plant a monument of shame in the heart of its capital.” The crowd responded enthusiastically, shouting: “Deutschland! Deutschland!”

No wonder proud military leaders sympathize with the AfD.

More than any other party, the AfD is representing the army’s nationalistic military mindset in the German parliament. Because Chancellor Angela Merkel’s Christian Democrats oppose these viewpoints, more and more members of the police and army are supporting the far right, as prominent Christian Democratic leader Friedrich Merz lamented recently.

Tension between the military and government is rising. Some blame the army’s recent incompetence on bureaucratic mismanagement. Many others, like Drexl and Kraus, believe that the entire mentality toward the military has to change. But the military sees the problem with the political leadership.

It’s obvious that these tensions will only increase. In the era of United States President Donald Trump and Brexit, German hostility toward the victors of World War ii is rising. The belief that the Allied forces are responsible for suppressing German pride is gaining wider acceptance.

More and more politicians demand a stronger German military to increase their political leverage. From a European perspective, the U.S. is withdrawing its military support from the Continent. Trust in nato is eroding. With Brexit, the prospect of military cooperation with Britain is decreasing significantly.

Europe cannot defend its economic interests against Russia and China without the necessary military deterrence. Europe and Asia are both dependent on imports from Africa and the Middle East. Crises in these regions demand a strong military presence to ensure political and economic interests are met.

For these reasons, Germany is urgent to revitalize its army. But increasing its military budget will not suffice. High-ranking Bundeswehr generals have repeatedly criticized this fallacy. They demand that Germany needs to regain a military mindset. The question is, when—if ever—will politicians follow their demand?

Bible prophecy speaks in great detail about the future of Germany. The Bible foretold many successive resurrections of a military power known as the Holy Roman Empire. You can read about this empire in The Holy Roman Empire in Prophecy.

The Bible foretells that Germany will soon lead the final resurrection of this empire. “The beast that thou sawest was, and is not; and shall ascend out of the bottomless pit, and go into perdition: and they that dwell on the earth shall wonder, whose names were not written in the book of life from the foundation of the world, when they behold the beast that was, and is not, and yet is” (Revelation 17:8).

The very same empire that brought the perils of World War ii will rise again. Highlighting this prophecy, the late theologian Herbert W. Armstrong made this stunning claim right after Germany surrendered in 1945:

The war is over, in Europe—or is it? We need to wake up and realize that right now is the most dangerous moment in United States’ national history, instead of assuming we now have peace! … We don’t understand German thoroughness. From the very start of World War ii, they have considered the possibility of losing this second round, as they did the first—and they have carefully, methodically planned, in such eventuality, the third round—World War iii!

Germany’s warlike mentality has never died. The country’s political leadership may have lost sight of it, but this military spirit is alive in the army corps. Calls to revive Germany’s Wehrmacht tradition are demands to revive an empire that revolves around its army. That is Germany’s history.

The Bible prophesies that Germany will get a political leader that arouses that military spirit more than ever before. “And in the latter time of their kingdom, when the transgressors are come to the full, a king of fierce countenance, and understanding dark sentences, shall stand up. And his power shall be mighty, but not by his own power: and he shall destroy wonderfully, and shall prosper, and practise, and shall destroy the mighty and the holy people. And through his policy also he shall cause craft to prosper in his hand; and he shall magnify himself in his heart, and by peace shall destroy many” (Daniel 8:23-25).

This man will take Germany’s military spirit much further than Germany’s military leaders demand today. He will not only inspire military pride, he will lead them to total war. And like the time of Adolf Hitler, the army will follow. But this future German strongman will command not only Germany’s army, but also the European army that is currently being forged.

The Bible reveals that this man will detonate nuclear weapons, leaving cities without inhabitants (Isaiah 6:11). But unlike Hitler, he will not be stopped by the Allied forces. Jesus Christ Himself will return to this Earth to end mankind’s madness!

There is a wonderful conclusion to these prophecies, and you need to understand why they are happening! Request a free copy of Germany and the Holy Roman Empire to understand why Germany is again returning to its military tradition and why God allows it.