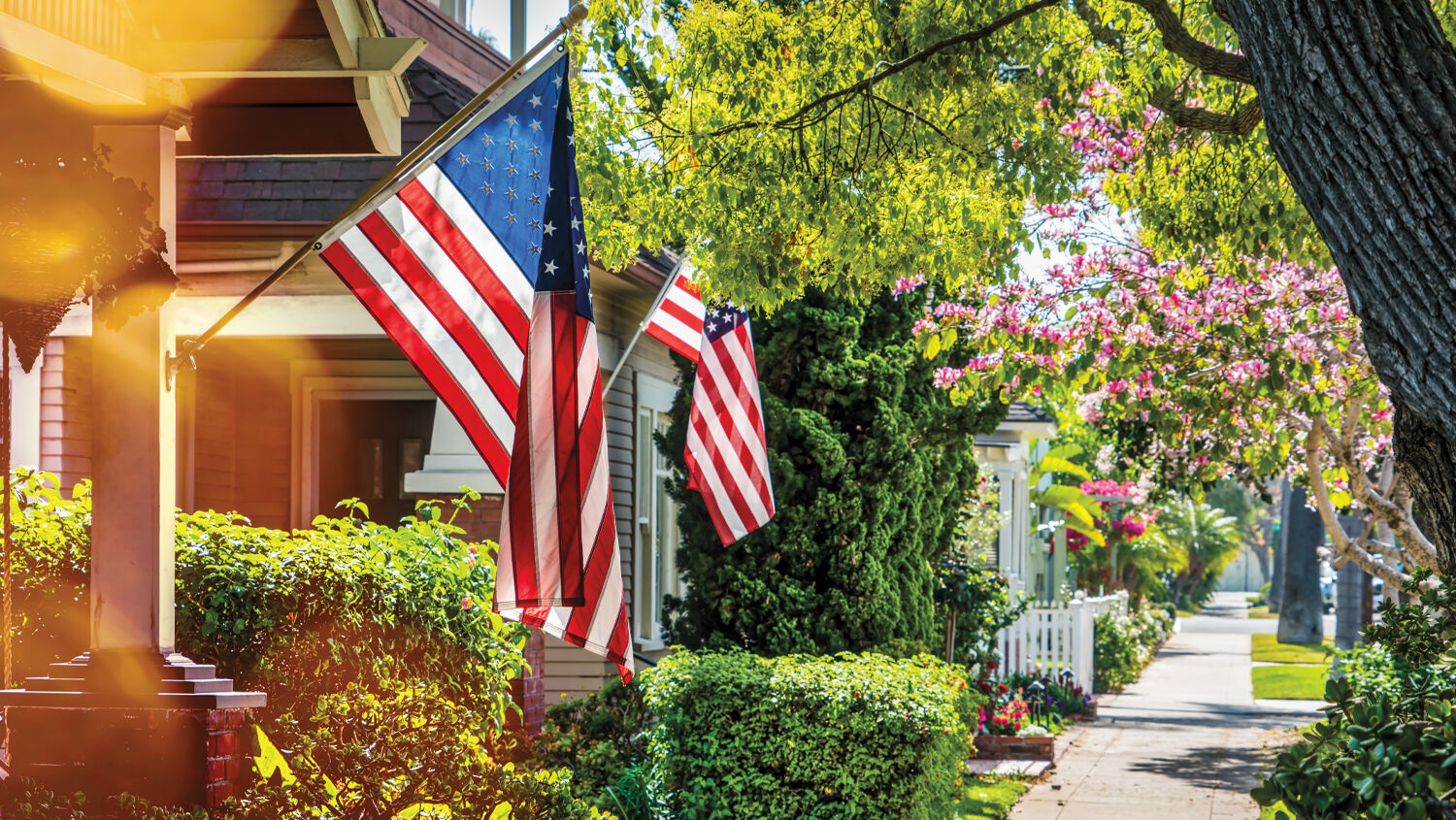 The office of Rep. Marjorie Taylor Greene announced on April 16 that Representative Greene was launching an America First Caucus for Congressional representatives who want to follow the values championed by President Donald Trump. But Greene scrapped these plans after receiving blowback from leaders in her own party. After Punchbowl News leaked a flyer promoting the new caucus, it became public knowledge that Representative Greene believes “America is a nation with a border, and a culture, strengthened by a common respect for uniquely Anglo-Saxon political traditions.”

This sparked immediate condemnation from activists, scholars and even other Republican politicians.

Minority Leader Kevin McCarthy responded to Greene’s proposal in an April 16 Twitter post: “America is built on the idea that we are all created equal and success is earned through honest, hard work. It isn’t built on identity, race or religion. The Republican Party is the party of Lincoln and the party of more opportunity for all Americans—not nativist dog whistles.” The Republican conference chair at the time, Rep. Liz Cheney, wrote: “Republicans believe in equal opportunity, freedom and justice for all. We teach our children the values of tolerance, decency and moral courage. Racism, nativism, and anti-Semitism are evil. History teaches we all have an obligation to confront and reject such malicious hate.”

Former House Speaker John Boehner said, “America First Caucus is one of the nuttiest things I’ve ever seen. … We’ve been the world’s giant melting pot for 250 years. And we ought to celebrate the fact that we are this giant melting pot.”

Is stating that America’s political traditions are “uniquely Anglo-Saxon,” or that mass immigration threatens “the long-term existential future of America as a unique country with a unique culture and a unique identity,” worthy of condemnation? Is it really “controversial,” “nativist” and “racist” to believe these things?

The United States grants legal permanent residence to about 1 million immigrants a year. The reason for limiting the quantity is to give time for newcomers to embrace and become part of American culture. Some people think the government should admit fewer immigrants. Some think it should admit more. But it is self-evident that the only people arguing for mass immigration are those who want to change America’s unique political traditions, culture and identity.

The mainstream media piled on Greene. Vanity Fair editors actually titled their reaction “Republicans Are Basically Starting a White Supremacist Caucus.” Washington Post bosses published “In the U.S., Praise for Anglo-Saxon Heritage Has Always Been About White Supremacy.” The Atlantic went with “‘Anglo-Saxon’ Is What You Say When ‘Whites Only’ Is Too Inclusive.” If you want to attract the wrath of liberals, say something supportive about Anglo-Saxon heritage.

Only about 1 in 5 Americans claim British heritage, and almost none of them believe in Anglo-Saxon racial superiority. So why are politicians and commentators swarming this story about Anglo-Saxon political traditions?

“It may come as a surprise to some American readers to learn that, in the eyes of many Continental European commentators, they and the British and the Australians and others form part of a continuous ‘Anglo-Saxon’ civilization, whose chief characteristic is a commitment to free markets,” Daniel Hannan writes in Inventing Freedom: How the English-Speaking Peoples Made the Modern World. “Anglo-Saxon values … had their genesis in the earliest Anglo-Saxon settlements, in the dark years, violent and unchronicled. From that era came three interrelated concepts that were to transform humankind. First, the idea of personal autonomy, including in contract and property rights; second, the notion that collective decisions ought to be made by representatives who are answerable to the community as a whole; third, the conception of the law as something more than a projection of the wishes of a ruler, as a folkright of inherited freedoms that bound the king just as surely as it bound his meanest subjects.”

Do the liberal attack dogs tearing apart Representative Greene’s America First Caucus believe that your personal freedoms, your right to limit your government, and your belief that there is a higher law are nativist and racist? Considering what many of them want to replace Anglo-Saxon political traditions with, the stunning answer is yes.

Today, 55 percent of human beings live in nations that at least claim to follow democratic principles. We take concepts like personal autonomy, property rights, representative government and the rule of law for granted. But four centuries ago, these concepts were almost exclusive to the British Empire. The book Albion’s Seed: Four British Folkways in America, by David Hackett Fischer, documents how these values were first brought to the Western Hemisphere between 1620 and 1640 by more than 20,000 Puritans who migrated from East Anglia to Massachusetts.

It was the original intent of Thomas Jefferson to have an image of the Anglo-Saxon kings Hengist and Horsa on one side of the Great Seal of the United States, and an image of Moses and the Israelites following a pillar of fire out of Egypt on the other side. He recognized the similarities between Anglo-Saxon common law and the laws of ancient Israel, and the U.S. Constitution was based on these common political principles.

But here is what even historians and constitutional conservatives do not understand. They love freedom of speech, freedom of assembly, the free market, freedom of religion, majority rule with minority protection, rule of law, limited government, separation of powers, checks and balances, governance through elected representatives, equality of all men, and inviolable individual rights granted by a higher power than human government.

But they admit they do not know where these principles ultimately came from.

Contrary to Hannan’s belief, the foundation upon which these principles were established was not built in “the dark years, violent and unchronicled.” It did not originate in the minds of Anglo-Saxon common people and their leaders.

Records such as the Anglo-Saxon Chronicle (a.d. 890) and the Ynglinga saga (a.d. 1225), although obviously colored with legend, attest that 22 generations prior to the birth of King Alfred the Great, the Angles, Saxons, Danes, Norse, Swedes and other related peoples lived near the city of Tanais on the north shore of the Black Sea. These people migrated to northwestern Europe during the era when the Roman Empire expanded into the region. These ancient Sakasones spoke the language of the Medes, but their political traditions came directly from the lost 10 tribes of ancient Israel.

In his most popular book, The United States and Britain in Prophecy, the late Herbert W. Armstrong proved that the Angles and Saxons actually descended from the lost Israelite tribes of Ephraim and Manasseh.

“Through the rule of 19 kings and seven successive dynasties, the 10-tribed house of Israel continued in the basic twin sins of Jeroboam: idolatry and Sabbath-breaking. Several of the kings added other evil and sinful practices,” he wrote. “But in 721–718 b.c., God caused the house of Israel to be invaded and conquered by the kingdom of Assyria. These Israelites were removed from their farms and their cities and taken to Assyria on the southern shores of the Caspian Sea as slaves. … The Assyrians—before 604 b.c.—left their land north of Babylon and migrated northwest—through the lands that are now Georgia, Ukraine, Poland, and into the land that is called Germany today. Today the descendants of those Assyrians are known to us as the German people. The people of 10-tribed Israel also migrated northwest. Though the Assyrians had taken Israel into captivity, the Israelites did not remain as slaves of the Assyrians in Europe. They continued on a little further—into Western Europe, the Scandinavian peninsula, and the British Isles!”

The history of the United States and Britain is the history of the Angles and Saxons and related peoples. And that history traces back to ancient Israel! And far from exalting the Anglo-Saxons, this history humbles them. The precious, positive, world-changing values that the Angles and Saxons spread across the globe came not because of them but in spite of them. The history of America’s forefathers is the history of rebellion, failure and subjugation. The continued existence of the Israelites—let alone their positive influence on the world—is attributable not to Israel but to the God of Israel.

God promised great blessings to the Israelites. But in Leviticus 26, He warned them that if they sinned against Him, He would delay those promises for 2,520 years (for proof, read The United States and Britain in Prophecy).

The United States and Britain in Prophecy
People of the Western world would be stunned—dumbfounded—if they knew! The governments of the United States, Britain, Canada, Australasia, South Africa would set in motion gigantic crash programs—if they knew! They could know! But they don’t! Why?
From The August 2021 Philadelphia Trumpet
View Issue FREE Subscription
Next
Previous