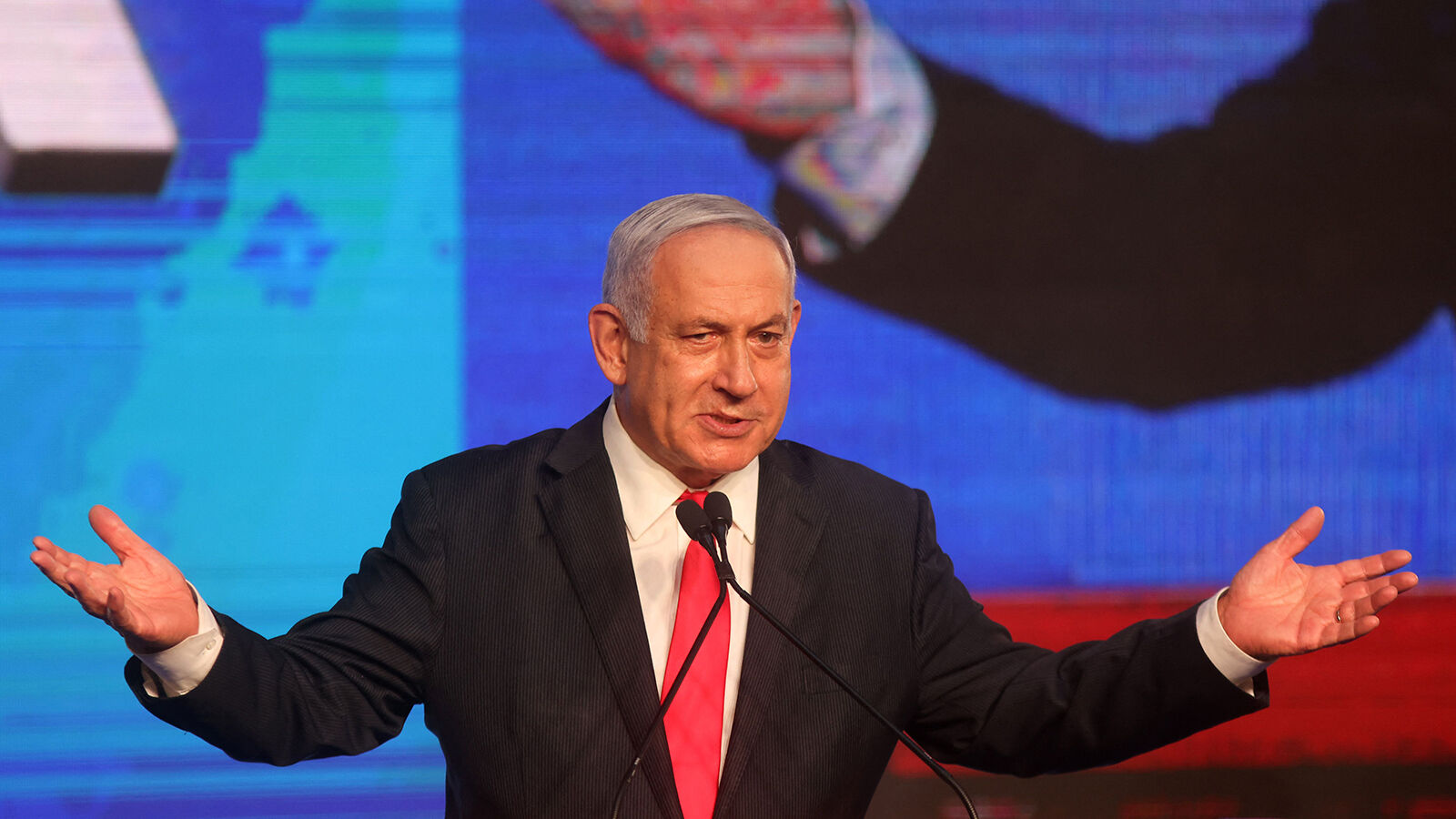 Israeli Prime Minister Benjamin Netanyahu addresses supporters in Jerusalem on March 24, 2021, after the end of voting in the fourth national election in two years.
EMMANUEL DUNAND/AFP via Getty Images

Benjamin Netanyahu understands a vital truth about Israel’s security that his political rivals do not. But will he soon be gone?

Jerusalem—Barring last-minute heroics, the longest-serving prime minister in Israeli history will soon be out of power. Just before midnight on Wednesday, Yair Lapid, leader of the center-left Yesh Atid party, telephoned President Reuvin Rivlin to declare that he has cobbled together a coalition of six parties that represents 61 seats in the Knesset, the number necessary to vote in a new prime minister and oust Benjamin Netanyahu.

The current plan is for the Yamina Party’s Naftali Bennet, a former Netanyahu ally, to serve as prime minister until 2023, when Yair Lapid of Yesh Atid will take over.

To make it official, the Knesset must come together for a vote to prove their loyalty to the “unity government.” Prior to that vote, Netanyahu will intensify his campaign for Knesset members to defect from their party. The Knesset vote is scheduled for June 14.

Netanyahu became Israel’s youngest-ever prime minister during his first term (1996–1999) and its longest-serving prime minister during his second (2009–present) and has weathered numerous onslaughts, including multiple corruption charges. But after four inconclusive elections in the past 26 months in which Bibi, as he is popularly known, was unable to pull ahead, it appears that this time the writing is on the wall.

Outside observers, especially conservatives, find it illogical that Israelis would discard Netanyahu in the face of multiple threats to Israel’s security. The prime minister is viewed by many as one of the most effective leaders in Israel’s modern history. In a region prone to violence, He has successfully managed to protect Israel from outside threats, especially Iran. In fact, the last decade under Netanyahu has been Israel’s most peaceful, and in just the past year, his government signed four new peace agreements with Arab states, doubling the number that have been signed since Israel’s modern founding. Meanwhile, as most nations still grapple with covid-related crises, Israel is back to normal, apart from its largely closed international borders.

Yet it is also undeniable that Mr. Netanyahu has become the most divisive leader in Israeli history.

In the past election, Netanyahu’s Likud party attained its most votes ever. That number was still not enough to maintain power, yet it shows the power he holds among the party’s base. And at the same time, Netanyahu’s enemies have increased across all sectors of society.

To attain the 61 seats, Mr. Lapid has cobbled together the most diverse “unity” coalition government in Israeli history, including no fewer than eight parties. Three parties (New Hope, Yisrael Bitenu and Yamina) are more right-wing than Netanyahu. Yet they will supposedly be able to govern in a coalition with far-left Labor and Meretz, plus center-left Yesh Atid and Blue and White. Then add to that mix the Ra’am party, an Islamist party joining the government of the State of Israel for the first time.

To make such a unity deal work heavy compromises have to be made by all parties. Many expect the government to dissolve as soon as it attains power.

So what has been strong enough to motivate these vastly different factions to form an obviously unworkable proposed coalition? One sentiment: Stop Netanyahu.

“This looks to me like a car with four different wheels, and every wheel is going in a different direction,” said Lt. Col. (Res.) Dr. Mordechai Kedar, senior research associate at the Begin-Sadat Center for Strategic Studies told jns on June 2. “The only thing today which they agree upon is the need to get rid of Netanyahu. This objective will be achieved in the first minute of this government. So what will keep it together in the second minute?”

Most of the “never Bibis” inside Israel understand that Israel’s would-be next government will start ending before it begins. But since they characterize Netanyahu as the single worst threat to Israel’s democracy, they view further turmoil and elections as being worth it as long as Netanyahu is gone.

According to some commentators, many Israelis want him gone because of the divisiveness that has emerged. Netanyahu routinely equates voting for leftists as voting for Israel’s impending doom either by Iranian takeover or by a runaway leftist supreme court. They say that, instead of healing ethnic divisions, many see him as exacerbating them. They say that any leader in charge for 12 consecutive years is inherently unhealthy for a democracy.

Many Israelis believe that ousting Netanyahu is low-risk, even in terms of national security—the area of emphasis for this former special forces captain. The one issue most Israelis can agree on is the need to stop Iran’s nuclear program. Nearly all candidates for high office claim to be as hawkish as the prime minister when it comes to stopping Iran.

Taking a public position against a nuclear Iran and actually preventing the reality of a nuclear Iran are two different things. But even if other candidates are equal to Netanyahu on this issue, the “low-risk” assessment of ousting him rests on the assumption that Iran is the greatest threat to Israel.

Prime Minister Netanyahu probably does not see it that way. More than any other political leader in Israel, Netanyahu is keenly aware of the anti-Israel policies of the United States. He almost certainly realizes that this is a greater threat to his country than even Iran.

More than any other political leader in Israel, Netanyahu recognizes that it is a United States-backed Iran that poses the greatest threat to Israel.

Although he has a longstanding friendship with Joe Biden, Mr. Netanyahu also likely understands that Mr. Biden is not running the United States. The last six months are proof enough that the Biden administration is tantamount to Barack Obama’s third term. The anti-Israel policies of Biden are the same as those of Barack Obama.

Mr. Obama admitted this week in an interview with Ezra Klein that 90 percent of Biden’s administration consists of people from the Obama administration. Many of these are actively seeking a way to give Iran access to billions of dollars through a revived nuclear deal. They notably refuse to acknowledge that the Abraham Accords signed in the past year are a historic change in the Middle East. They won’t even call them by that name.

In recent weeks, Biden’s government gave diplomatic cover to Hamas’s demands that Israel stop exercising its legal rights inside the East Jerusalem neighborhood of Sheikh Jarrah. This emboldened the terrorist group and contributed to the latest Iran-Israel rocket war over Gaza. As hostilities raged, the United States pressured Israel to enact a ceasefire even as Hamas continued raining rockets down on Israeli civilians. Tony Badran puts forward a compelling case that the U.S. actually caused the recent fighting in Gaza.

During his visit to Israel last week, U.S. Secretary of State Antony Blinken warned Israel against evicting the non-paying Arab tenants lest it spark another war. Meanwhile, as evidenced by the front page of the New York Times this week, the Biden administration’s pro-Palestinian policies have received the full endorsement of America’s most powerful media corporations.

The problem with the New York Times’ Gaza coverage https://t.co/j9woLXQfag via @spectator

Such naïve and short-sighted animosity toward a proven leader at this time is a terrible mistake to make in a personal quest for power.

Yet some regard Netanyahu’s willingness to stand up to the Biden administration as the main reason he should be forced out. They claim that the rapidly deteriorating relationship with the United States is actually Netanyahu’s fault. The reverse is true: Mr. Netanyahu is fighting to safeguard Israel’s future, just as he has done during previous American administrations. It is the American regime that has turned hostile.

“If we have to choose—I hope it doesn’t happen—between friction with our great friend the United States and eliminating the existential threat, eliminating the existential threat [wins],” Netanyahu said recently. The left-wing Israeli media condemned the statement, as did some politicians in the potential governing coalition. They said Netanyahu should voice those concerns with the United States behind closed doors. Such politicians do not see the true threat of the hostile Biden administration.

Netanyahu understands that Israel now faces the most hostile administration in American history and a massive media onslaught—that has Iran’s back. For these reasons in particular, losing Netanyahu’s leadership—especially to an abortive coalition in an ideological war with itself—could be disastrous for the State of Israel.

In the lead-up to the first Iran deal being enacted by the Obama administration, Mr. Netanyahu was often the lone voice crying out against the destructive arrangement. He correctly saw the deal as a way to infuse Iran with billions of dollars and also give it the weapons it desires to carry out its genocidal ambitions on the State of Israel.

On March 3, 2015, Mr. Netanayahu appeared before a joint session of the American Congress to warn of the deal. This was a direct public affront to President Obama’s Iran deal. But it was also an appeal to the American public, exposing how their president was arranging the destruction of their ally Israel. “You stand with Israel, because you know the story of Israel is not only the story of the Jewish people but of the human spirit that refuses again and again to succumb to history’s horrors,” Netanyahu said during the speech.

At the time, Trumpet editor in chief Gerald Flurry likened that speech at Congress to a Churchillian warning. He wrote:

When U.S. President Barack Obama started negotiating a nuclear deal with Iran—the world’s leading sponsor of terrorism—only Mr. Netanyahu came to speak before the U.S. Congress, warning them of the catastrophic consequences of such a nuclear deal! This deal would open the way for the mullahs in Iran to develop nuclear weapons! Mr. Netanyahu warned Congress that this deal put the very survival of Israel and America at stake!

Mr. Flurry then pointed to a prophecy in the ancient book of Ezekiel that described the people of Israel choosing a watchman to warn of coming destruction (Ezekiel 33:1-7). “The only other modern leader outside of God’s Church who has delivered a watchman warning similar to Sir Winston Churchill would be Israeli Prime Minister Benjamin Netanyahu,” wrote Mr. Flurry at the time.

Netanyahu was chosen by the people, “he saw the sword coming,” and he warned of the danger of a United States-backed Iran, embodied in Barack Obama’s nuclear deal. And the American people listened, voting into power a leader who was determined to nullify the deal and restore deterrence on Iran.

But for the moment, President Trump is gone. Barack Obama’s policies are back. And a more dangerous Iran deal is on the table.

Could there be a worse time for Israel to lose its Churchill?

Israel faces a historic moment right now. Several important biblical prophecies are in play, and political upheaval—particularly one that emboldens Israel’s enemies and makes the Jewish state more vulnerable—could rapidly advance the fulfillment of these prophecies.

Still, although Netanyahu may be gone, the warning will continue. As the Prophet Ezekiel relates, a watchman will arise whom the people themselves didn’t choose (Ezekiel 33:7). This won’t be a watchman who is voted into office. It’s a watchman whom God chooses, one who will continue warning Israel about what lies ahead. To learn more about these future prophecies for the Jewish state, please read Gerald Flurry’s free booklet Jerusalem in Prophecy.