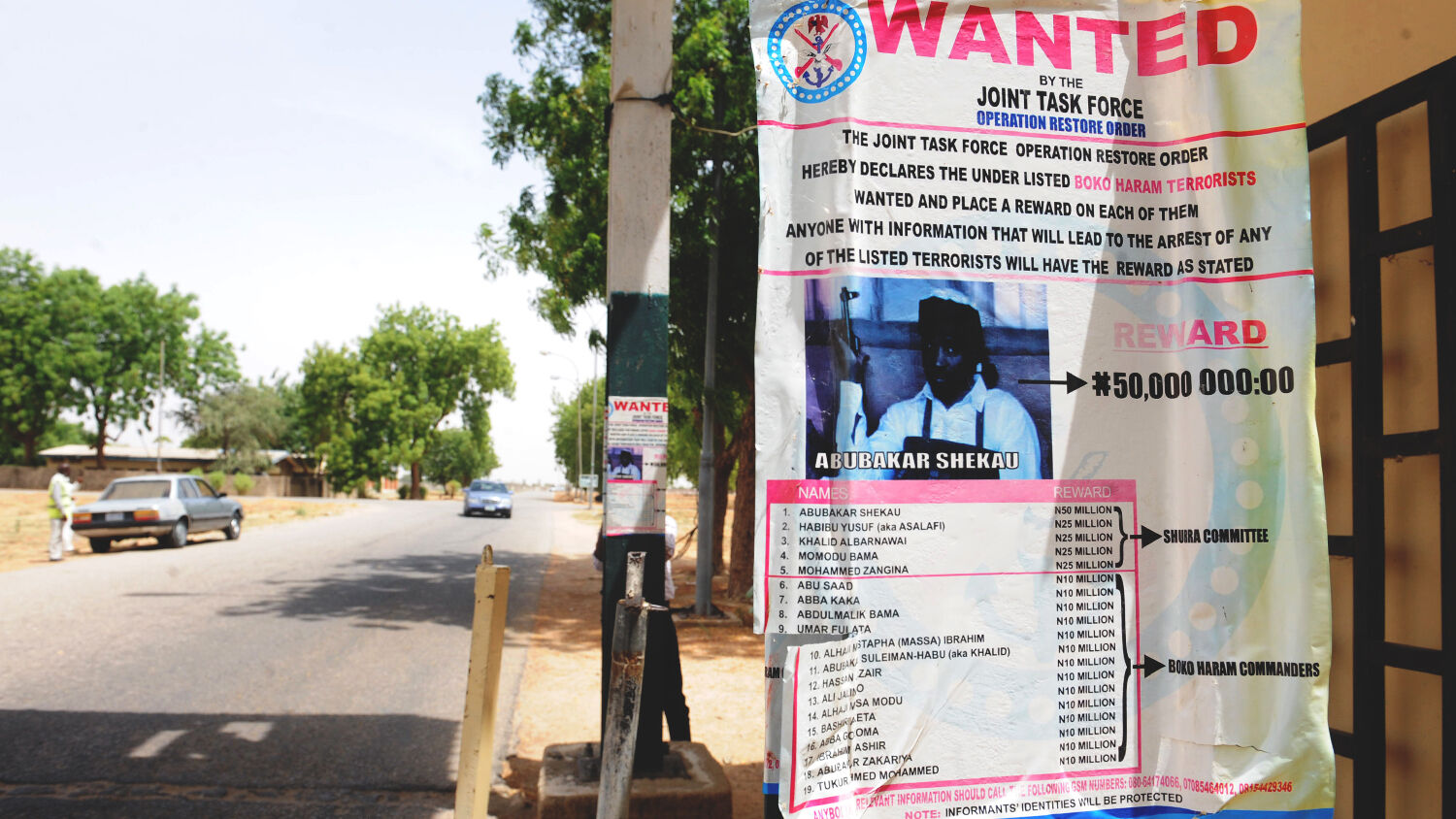 A poster displayed along the road shows photograph of Imam Abubakar Shekau, leader of the militant Islamist group Boko Haram, declared wanted by the Nigerian military with $320,471 reward for information that could lead to his capture in northeastern Nigeria town of Maiduguri May 1, 2013.
PIUS UTOMI EKPEI/AFP/Getty Images

Will this mean peace for Nigeria?

Abubakar Shekau, the warlord who led Nigerian jihadist group Boko Haram since 2010, has died, the Wall Street Journal reported on May 21.

Boko Haram famously kidnapped 276 school girls, most of whom were Christian, in 2014 and held them captive for years. But the group is guilty of kidnapping thousands of children. They’ve kidnapped about 10,000 boys to serve as child soldiers. Roughly the same amount of girls have been taken as child brides or forced to be suicide bombers. Boko Haram, which means “Western education is forbidden,” is committed to eradicating Western influence in Nigeria. Its end goal is to establish an Islamist state in West Africa. Shekau had a $7 million bounty on his head from the United States State Department. By comparison, the current leader of the Islamic State has a $10 million dollar bounty on his head. Boko Haram has killed an estimated 37,500 people and displaced 2.5 million. The bounty made Shekau “Africa’s most wanted man.”

Boko Haram previously pledged allegiance to the Islamic State. But the two groups eventually split over Shekau’s use of child suicide bombers and cruelty toward fellow Muslims. Being too cruel for even the Islamic State is saying something. The Islamic State laid siege against Shekau’s base of operations in Nigeria’s Sambisa Forest. Shekau’s defenses were compromised. He killed himself with a suicide vest. Although authorities have reported Shekau dead at least four times previously, this time the news seems to be genuine.

“Shekau has been the longest lasting terrorist leader in the world; perhaps the world’s least understood warlord and its most underestimated,” said Bulama Bukarti, an Africa analyst. “This is a huge moment for Nigeria.”

Does this mean that peace is finally coming to Nigeria?

Nigeria, with over 211 million people, is the most populous country in Africa and seventh-largest in the world. It’s one of the continent’s largest economies. It has an army of about 300,000 soldiers. Yet Nigeria has been failing to keep its head above the water.

The country has failed to squash the Boko Haram insurgency for well over a decade. It has to rely on support from Chad, who recently lost its longtime strongman President Idriss Déby. It has to deal with at least six insurgencies. Its coasts are, according to Foreign Policy, “the most dangerous shipping zone in the world.” The main reason for this are its struggles with piracy.

Boko Haram recently kidnapped another roughly 200 schoolchildren—after Shekau apparently killed himself. Shekau’s death isn’t going to cause radical Islam to disappear in Nigeria. If anything, radical Islam is stronger than ever.

And it’s not only Boko Haram and the Islamic State that are causing problems. The Nigerian government banned an Iranian-backed Shiite movement, the Islamic Movement in Nigeria (imn), in 2019. Mohammed Adamu, the police chief of Nigeria’s capital city, Abuja, called the movement’s followers “terrorists.” The imn, which has drawn crowds in the tens of thousands, doesn’t recognize the legitimacy of the Nigerian government and maintains a “Hezbollah-like” guard corps.

If Nigeria were to collapse completely, what would be the ramifications?

It could involve Europe more in the region. Under Operation Barkhane, France already has troops on the ground in West Africa fighting against radical Islam. Nigeria currently isn’t directly involved in Operation Barkhane. But if the country faced state collapse at the hands of jihadists, France might get involved. With Africa’s largest population and its relative proximity to the Mediterranean, Nigeria could also see an exodus of refugees trying to cross in to Europe.

Nigeria is already having interesting overtures coming from another European country: Germany. Berlin’s Bode Museum was home to some of the Benin Bronzes. The Benin Bronzes are priceless Nigerian artworks taken by the British during the colonial period. Most major Western museums are reluctant to send their artifacts back to their countries of origin. One of the reasons for this is that many came from countries with unstable political climates, like Iraq and Egypt. If artifacts are sent back, they risk getting destroyed in a war. That doesn’t seem to concern the German government in this case, as it was announced on May 12 that Germany would be sending some artwork back. Considering many Nigerians consider the bronzes important to their culture, this could curry favor between Berlin and Abuja.

The Trumpet has watched Europe’s interest in Africa, specifically to counter radical Islam, for years. Notice an important biblical prophecy in the book of Daniel: “And at the time of the end shall the king of the south push at him: and the king of the north shall come against him like a whirlwind, with chariots, and with horsemen, and with many ships; and he shall enter into the countries, and shall overflow and pass over. … He shall stretch forth his hand also upon the countries: and the land of Egypt shall not escape. But he shall have power over the treasures of gold and of silver, and over all the precious things of Egypt: and the Libyans and the Ethiopians shall be at his steps” (Daniel 11:40, 42-43). Who are the kings of the north and south?

This means that Europe is going to take an interest in how radical Islam progresses in Africa. Whether Nigeria specifically will have a part to play in this remains to be seen. But, being as important of a country as it is in the region, any problems in Nigeria would certainly attract Europe’s eye.

For more information about radical Islam and Africa, request your free copy of The King of the South.