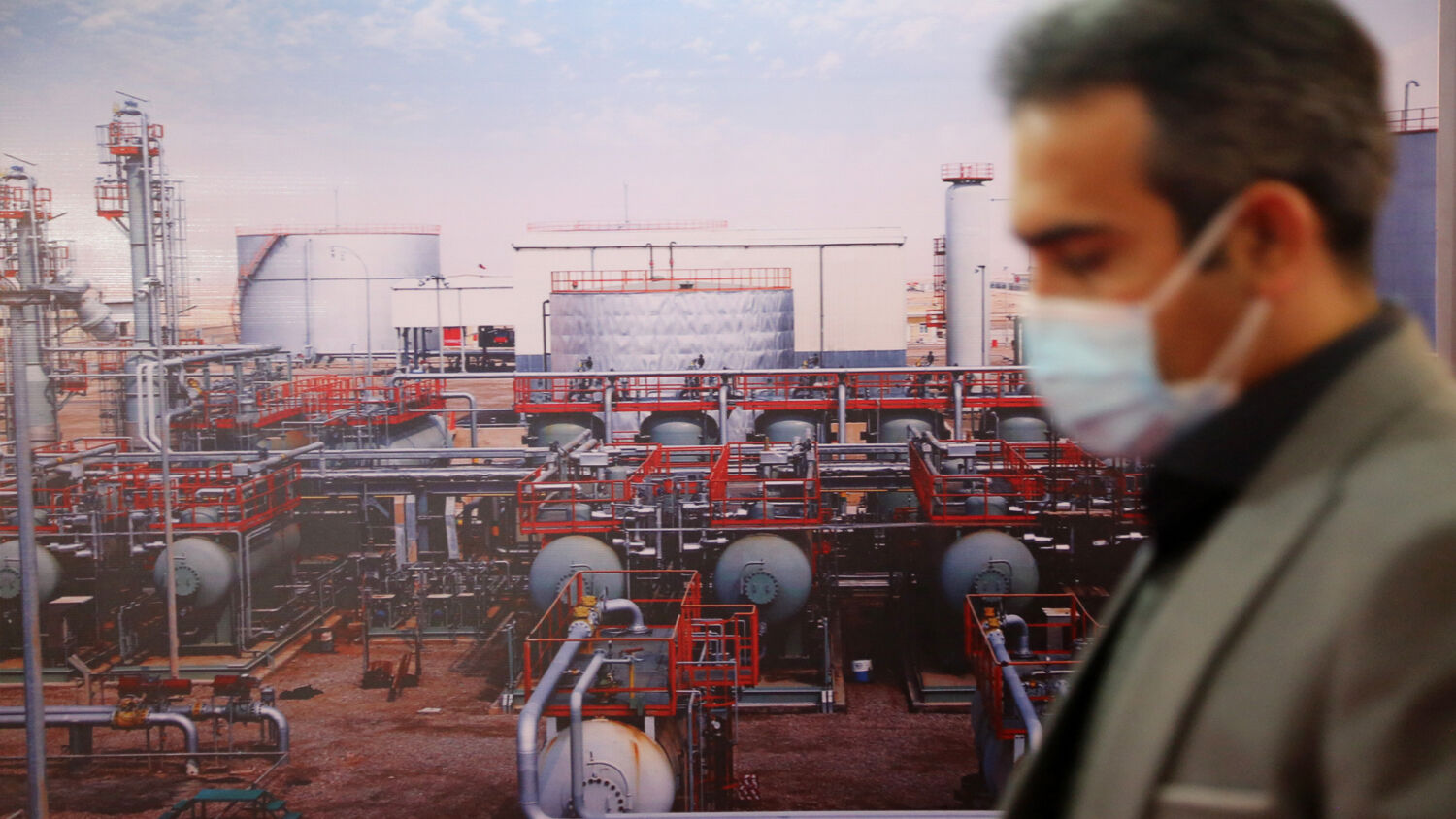 What the Goreh-Jask pipeline means for the Middle East and the world.

Iran will soon be able to export its own oil even while blocking the Strait of Hormuz. The Iranian National Oil Co. announced May 19 that it had begun pumping oil through Goreh-Jask pipeline. The pipeline has been planned since at least 2012. It is 684 miles long, stretching from western Iran to the port of Jask in the Gulf of Oman, and has the capacity to transport a million barrels of oil per day. It has the potential to increase Iran’s oil exports by about 50 percent.

“This is a strategic project in terms of security, economy and energy,” said Iranian President Hassan Rouhani in a televised conference. “Customers who buy oil from us want to be confident that they can take our oil under any conditions.”

Iran currently exports the vast majority of its oil from the port at Kharg Island, on the western interior of the Persian Gulf. Jask sits on the Gulf of Oman, which means Iran could practically export its oil directly to the Indian Ocean. It wouldn’t have to go through the Strait of Hormuz, the narrow waterway that connects the Gulf of Oman with the Persian Gulf.

Rouhani mentioned this in his conference: “On a rainy day, it would be us who would be in trouble [if the strait were to be closed]. We have gotten past this problem.”

Last year, about 18 million barrels of oil passed through the Strait of Hormuz every day. By comparison, 3 million barrels per day passed through the Suez Canal. The United States Department of Energy calls the Strait of Hormuz “the world’s most important oil transit choke point.” It’s also one of the most vulnerable. At its narrowest point, it’s only 21 miles wide. On one side of that 21-mile stretch sits the Sultanate of Oman, one of the most moderate Arab states. On the other side is Iran.

Other major oil-producing countries—Saudi Arabia, the United Arab Emirates, Kuwait, Qatar, Bahrain and Iraq—export their oil through the Strait of Hormuz. Five of the 10 largest oil-exporting nations sit on the Persian Gulf. The U.S. Navy also depends on it to access its various Persian Gulf naval bases. It is one of the most critical choke points in the world.

This is what makes the Goreh-Jask pipeline so concerning.

Other Gulf exporting countries, like Saudi Arabia and the U.A.E., have pipelines leading to ports outside the Strait of Hormuz. If the strait were to close, as Rouhani mentioned, Iran would have suffered the most. But that’s no longer the case.

Is closure of the strait even an option?

Think about all that has happened in and around the strait since the start of this year. In January, Iran seized a South Korean tanker, prompting a response from the South Korean Navy. In February, an Israeli ship in the Gulf of Oman was attacked, most likely by Iran. On May 10, the U.S. Navy fired 30 warning shots at 13 Iranian vessels buzzing them in the strait.

Iran’s destabilizing foreign policy isn’t limited to the Strait of Hormuz and Gulf of Oman. Iran is the “king” of Islamic revolution all over the Middle East. Iran is Hamas’s main sponsor for weapons and weapon technology in Gaza; the rockets fired in the recent Gaza-Israel conflict were designed in Iran. Israeli Prime Minister Benjamin Netanyahu stated on May 20, “If Iranian support is removed, [Hamas] will collapse within two weeks.”

Iran also sponsors the Houthi rebels in Yemen. This Arab state on the shores of the Red Sea is currently in a civil war between the Islamist Houthis and the internationally recognized government. Despite intervention by Saudi Arabia and the U.A.E. on behalf of the government, the Houthis are winning. Part of Yemeni territory includes the Bab-el Mandeb strait, the southern entrance to the Red Sea.

Rouhani is implying that Iran is too pragmatic to harm itself by closing the Strait of Hormuz. But Iranian foreign policy is by nature unpredictable and destabilizing. Tehran is not on good terms with the West. Iran’s government has a reputation for bold, pushy escapades that irritate its enemies. If Iran really wanted to hurt the West, it could close the Strait of Hormuz to oil traffic. Now that it will have a pipeline bypassing the strait, it could do so without hurting its own economy as much.

And if the Houthis get full control of Yemen, you could add control of the Bab-el Mandeb to the equation as well. If you close off the Red Sea to trade, you cut off the quickest path from the Mediterranean to the Indian Ocean.

The Goreh-Jask pipeline could be the final piece in making Iran king of world trade. Not because Iran has a powerhouse economy of its own, but because it controls all the trade routes. And whoever wants to use them would be at Tehran’s mercy.

The Bible prophesies that Iran will get such control over world trade.

A prophecy in the book of Daniel reads: “And at the time of the end shall the king of the south push at him: and the king of the north shall come against him like a whirlwind, with chariots, and with horsemen, and with many ships; and he shall enter into the countries, and shall overflow and pass over. … He shall stretch forth his hand also upon the countries: and the land of Egypt shall not escape. But he shall have power over the treasures of gold and of silver, and over all the precious things of Egypt: and the Libyans and the Ethiopians shall be at his steps” (verses 40, 42-43).

Who are these mysterious kings of the south and north?

The preceding verses of Daniel 11, compared with secular history, reveal who the king of the north is. In History and Prophecy of the Middle East, Trumpet executive editor Stephen Flurry proves that the king of the north referred to from Daniel 11:40 on is speaking of a revival of the Roman Empire developing in Europe right now, the “time of the end.”

Who, then, is the king of the south?

From Daniel 11, we know it is a major power located south of Europe; it has a pushy, provocative foreign policy. The references to Egypt, Libya and Ethiopia show that it has influence all over the Middle East and Africa.

Trumpet editor in chief Gerald Flurry identifies the king of the south as a radical Islamist power bloc in his free booklet The King of the South. Specifically, he points to Iran as the head of it.

What nation could be better called the “king” of radical Islam? Iran already has an empire of proxy states and sponsored terrorist groups all over the region. Its tentacles stretch everywhere from Gaza to Yemen to Lebanon to Syria to Iraq to Somalia. And Tehran is always hungry to add more countries to its conquests.

But what does this have to do with Iran controlling world trade?

The key is the references to Egypt, Libya and Ethiopia. Mr. Flurry writes in The King of the South:

All you need to do is get a good map of the Middle East, with the emphasis on the Mediterranean Sea and the Red Sea. Then you can see why the king of the south, or radical Islam, is so interested in an alliance with or control over these two countries (as well as Egypt and Tunisia). They are on the two seas that comprise the most important trade route in the world! …

That could give Iran virtual control of the trade through those seas. Radical Islam could stop the flow of essential oil to the U.S. and Europe!

The very idea of a radical Islamist power in control of the most important trade route in the world means that this isn’t just a local issue. It’s something that could affect the entire world in the biggest of ways. Add the power to close off the Strait of Hormuz, and that threat is greatly amplified.

To learn more, request your free copy of The King of the South.