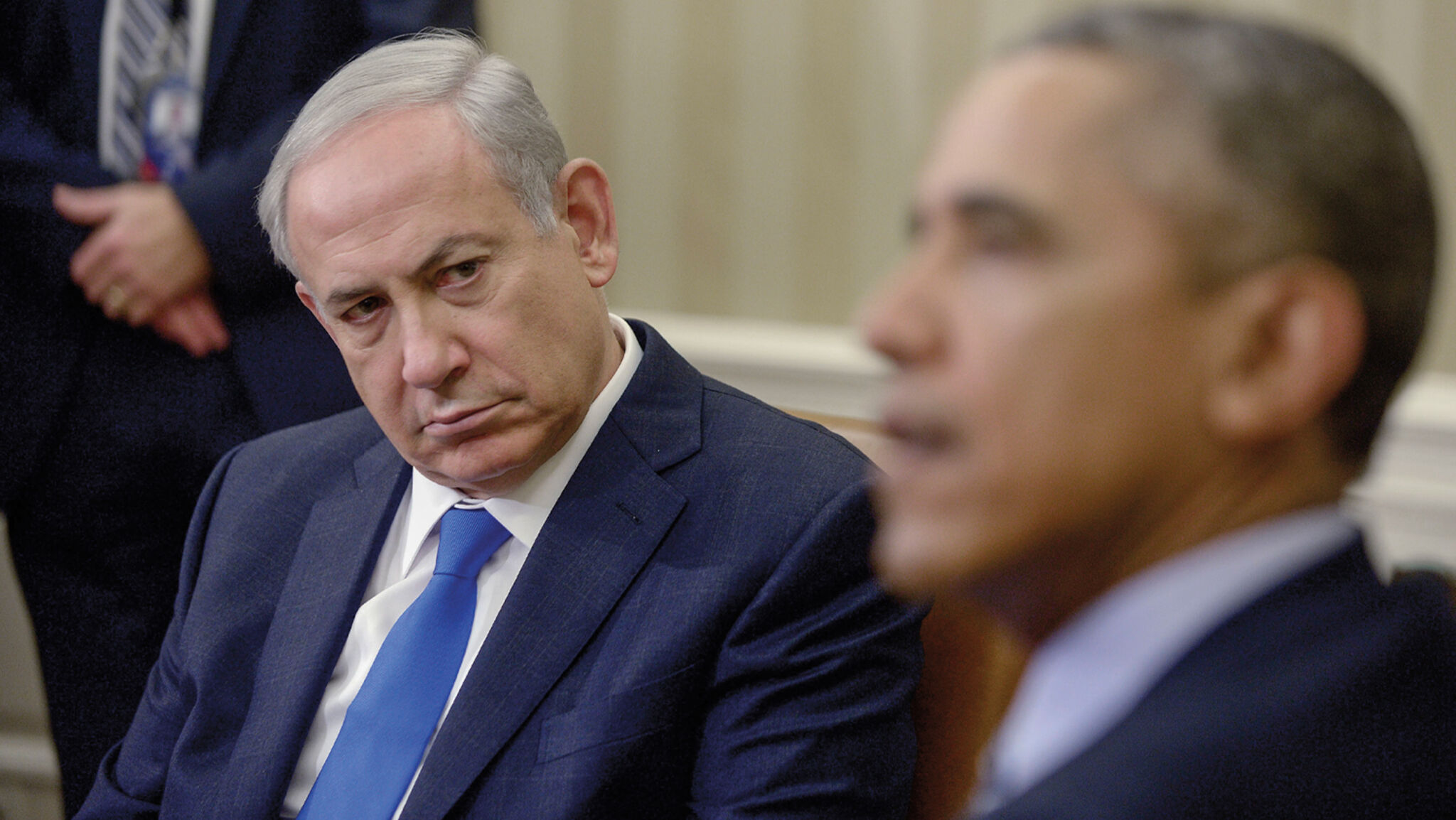 Netanyahu meets with President Obama in the White House in 2015.
Olivier Douliery/Getty Images

This year, the Middle East may experience its most dramatic shake-up of the past half century. The Biden administration has quickly and decisively empowered Iran and its allies at the expense of America’s own historic allies, particularly Israel.

This policy to strengthen the world’s top state sponsor of terrorism is not new. This self-defeating foreign policy was first implemented during the presidency of Barack Obama. During his second term, President Obama and Vice President Joe Biden pursued what Trumpet editor in chief Gerald Flurry called the “worst foreign-policy mistake in American history.” Obama forced through the Joint Comprehensive Plan of Action nuclear deal with Iran that gave it access to over $100 billion; $1.8 billion of that was flown into Tehran in untraceable cash.

The very premise of these concessions to Iran was irrational to anyone concerned about America’s security, let alone Israel’s. Then Iran added further demands. But Obama persisted. It gradually dawned on some astute commentators that this was no innocent “bad deal.” The disastrous Iran nuclear deal was intentional, and there was a dark motive behind that intent.

In reality, Obama wasn’t played by the Iranians; he was helping them with their ambitions. Obama’s agenda of “fundamentally transforming the United States of America” included fundamentally transforming American relationships in the Middle East. He pivoted American policy and resources to embrace and sponsor enemies and to shun allies—or push them directly into the line of fire.

Now Barack Obama’s assistant is in the White House. And this time, there is no waiting for a second term to fundamentally disrupt the Middle East. It’s happening now.

Allies Out, Iran In

President Donald Trump starkly reversed Obama’s destructive policies, including withdrawing the United States from the nuclear deal, moving its embassy to Jerusalem, and striking down Iran’s terrorist mastermind, Gen. Qassem Suleimani. But the new Biden administration signaled from day one that Trump’s policy aimed at containing Iran is over.

Breaking with long-standing presidential precedent over the past 50 years, Biden refused to even call Israeli Prime Minister Benjamin Netanyahu for four weeks. His cabinet is full of Obama-era operatives and activists who have stridently opposed Israel. Israeli commentator Caroline Glick wrote that the Biden administration “is shaping up to be the most hostile U.S. administration ever.” The White House also put Saudi Arabia on notice that it is investigating its human rights abuses, and it blocked a massive weapons deal that had been approved by Congress.

Nothing highlights how eager Obama is to empower Iran’s regime more clearly than Biden’s appointment of Robert Malley as his special envoy to Iran. Malley is another Obama veteran. He was called in as candidate Obama’s foreign-policy adviser in 2008. However, when it was made public that Malley had met with leaders of the Hamas terrorist group, he was dropped so as not to hinder Obama’s election hopes. After Obama won reelection in 2012 and Malley’s ties to terrorists couldn’t hurt him at the ballot box, Obama brought Malley in as senior director of the president’s National Security Council. In 2015, he became Obama’s lead negotiator for the nuclear deal.

Malley’s return clearly signals that Iran can expect another favorable deal in the near future. As Jonathan Tobin wrote on January 22, Malley is “Iran’s ideal candidate for the position for American envoy.” The same day, Republican Sen. Tom Cotton deplored the choice of Malley, tweeting, “Malley has a long track record of sympathy for the Iranian regime & animus towards Israel. The ayatollahs wouldn’t believe their luck if he is selected.” Lucky for Iran, Malley was selected. And Iran’s forthcoming rigged presidential election in June will likely provide a “moderate” leader with whom a new Iran deal can be negotiated.

If it seems premature to forecast such a colossal shift in America’s Mideast policy based on these details, consider the policy reversal that has already taken place in the current flash point of Iran’s quest to dominate the region: Yemen.

Most people could hardly place Yemen on a map, yet it is precisely its geography that makes this nation important. Located on the southwestern Arabian Peninsula, its west coast borders the narrow southern entrance of the Red Sea. Known in Arabic as the Bab el-Mandeb, this 22-mile-wide strait ultimately connects the Indian Ocean to the Mediterranean Sea. Control Yemen, and you can control Red Sea trade.

Since 2014, Yemen has suffered through a civil war instigated by the Houthis, a Shiite Islamic sect with historic ideological ties to Iran. In September 2014, the Houthis took over the capital city, Sana’a, and have been fighting against the internationally recognized government ever since. But this war is not just some internal Yemeni matter. Saudi Arabia has given the national government financial and military support, while Iran has trained, organized and armed the Houthis as it has with its other terrorist proxies such as Hezbollah in Lebanon.

Iran doesn’t hide its control of the Houthis—it boasts about it. “We in the axis of resistance are the new sultans of the Mediterranean and the Gulf,” said Mohammed Sadeq al-Hosseini, adviser to former Iranian President Mohammed Khatami, during the Houthis’ uprising in 2014. “We in Tehran, Damascus, [Hezbollah’s] southern suburb of Beirut, Baghdad and Sana’a will shape the region. We are the new sultans of the Red Sea as well.”

Since the fall of Sana’a in 2014, an international coalition led by American allies Saudi Arabia and the United Arab Emirates have been trying to defeat the Houthis and, by direct extension, Iran’s dominance of the Red Sea.

As one of his final acts in office, President Trump designated the Houthis a foreign terrorist organization. He also signed a massive weapons deal with Saudi Arabia, providing sophisticated reaper drones to be used in the Yemen war. Trump negotiated the sale of the F-35, one of the most sophisticated fighter aircraft in the world, to the United Arab Emirates. In both weapons agreements, Trump was arming America’s allies with weapons that could help stop Iran’s quest for dominance in Yemen and elsewhere.

Yet in Mr. Biden’s first week in office, he not only reversed the designation of the Houthis as a terrorist group, but also announced that the U.S. was ending its support for the Saudi-led campaign against the Houthis. And he annulled the arms deals to Saudi Arabia and the U.A.E.

Geopolitical thinker George Friedman, who is famously low-key, wrote on February 9 that Biden’s moves “may represent a radical shift in U.S. Middle East policy” and that “the threat of an Iran-dominated Yemen is real.”

Hudson Institute’s Michael Doran wrote, “Instead of forcing Iran to retreat, the Biden administration is working to drive out Saudi Arabia, a U.S. ally, which intervened in Yemen to stop Iran’s advance. … Abandoning containment, gutting deterrence, squandering leverage, downgrading allies and enriching enemies—these are the essential components of the Obama-Biden strategy. For a superpower to embrace such an approach isn’t only abnormal; it is alarming” (Wall Street Journal, February 4).

How has Iran responded?

Since early February, the Houthis have unleashed a huge offensive aimed at military and civilian targets in southern Saudi Arabia, including public airports. On February 13, they launched a vast ground assault against Marib, the last governorate in northern Yemen they do not already control. This oil-rich area has provided the internationally recognized government with a source of income and power, but now it is under threat at the exact time that the U.S. has withdrawn its support. American foreign policy now supports an Iranian takeover of Yemen.

These decisions are not unrelated. They are signals read clearly by America’s historic enemy Iran and by America’s historic allies, such as Israel. They communicate whose side the Biden administration is on. The “Obama-Biden” strategy, as Doran rightly characterized it, is to support Iran and not be shy about it.

Obama-Biden policy from 2008 to 2016 and Obama-Biden policy in 2021 is crucial to understand, and not just because the Middle East in general is an extremely dangerous region or because the struggle to control the Red Sea in particular can spark a war (as it did with the 1967 Six-Day War). The reason you need to understand and watch American Middle East policy right now is that it is prophesied to ultimately terminate in a 21st-century world war.

Based on prophecy in the book of Daniel, Trumpet editor in chief Gerald Flurry wrote in 2015 that the “Houthi takeover in Yemen proves that Iran is implementing a bold strategy to control the vital sea lane from the Indian Ocean to the Mediterranean Sea.” Mr. Flurry describes that strategy in Libya and Ethiopia in Prophecy. The critical end-time prophecy is recorded in Daniel 11.

“And at the time of the end shall the king of the south push at him: and the king of the north shall come against him like a whirlwind, with chariots, and with horsemen, and with many ships; and he shall enter into the countries, and shall overflow and pass over” (verse 40).

For three decades, Mr. Flurry has identified the king of the south as a radical Islamist power led by Iran, and the king of the north as a German-led European power. This prophecy reveals that the Iran-led power will push at Europe. “Taking over Yemen puts Iran in an even stronger position to make this push,” Mr. Flurry wrote in 2015.

Iran knows that strategic control of Yemen can make it “sultan” of the Red Sea. Bible prophecy shows that Iran will gain control of not only the southern Red Sea, but also its entire length leading up to and including Egypt.

What is astounding, however, is that it is America, under an Obama-Biden strategy, actively aiding and abetting Iran. And it is doing so even more openly than during Obama’s presidency.

When America is empowering a nation that calls it “the great Satan,” that oppresses its own people, that sponsors more terrorism than any other nation on the planet, that follows a fanatic and suicidal ideology, that is pursuing nuclear weapons, that has openly threatened much of the civilized world, and that promises to wipe “the little Satan,” Israel, off the map, you have to recognize reality: Something is dreadfully wrong with America’s foreign policy.

This was the Obama administration’s partially secretive goal. It is being continued by Obama and the Biden administration out in the open.

The King of the South
The Prophet Daniel wrote about a future confrontation between the king of the north and the king of the south. We are now in the time when these two major powers are quickly rising! The king of the south is stirring up trouble even today. It is critical that you know the identity of this prophesied power!
From The April 2021 Philadelphia Trumpet
View Issue FREE Subscription
Next
Previous