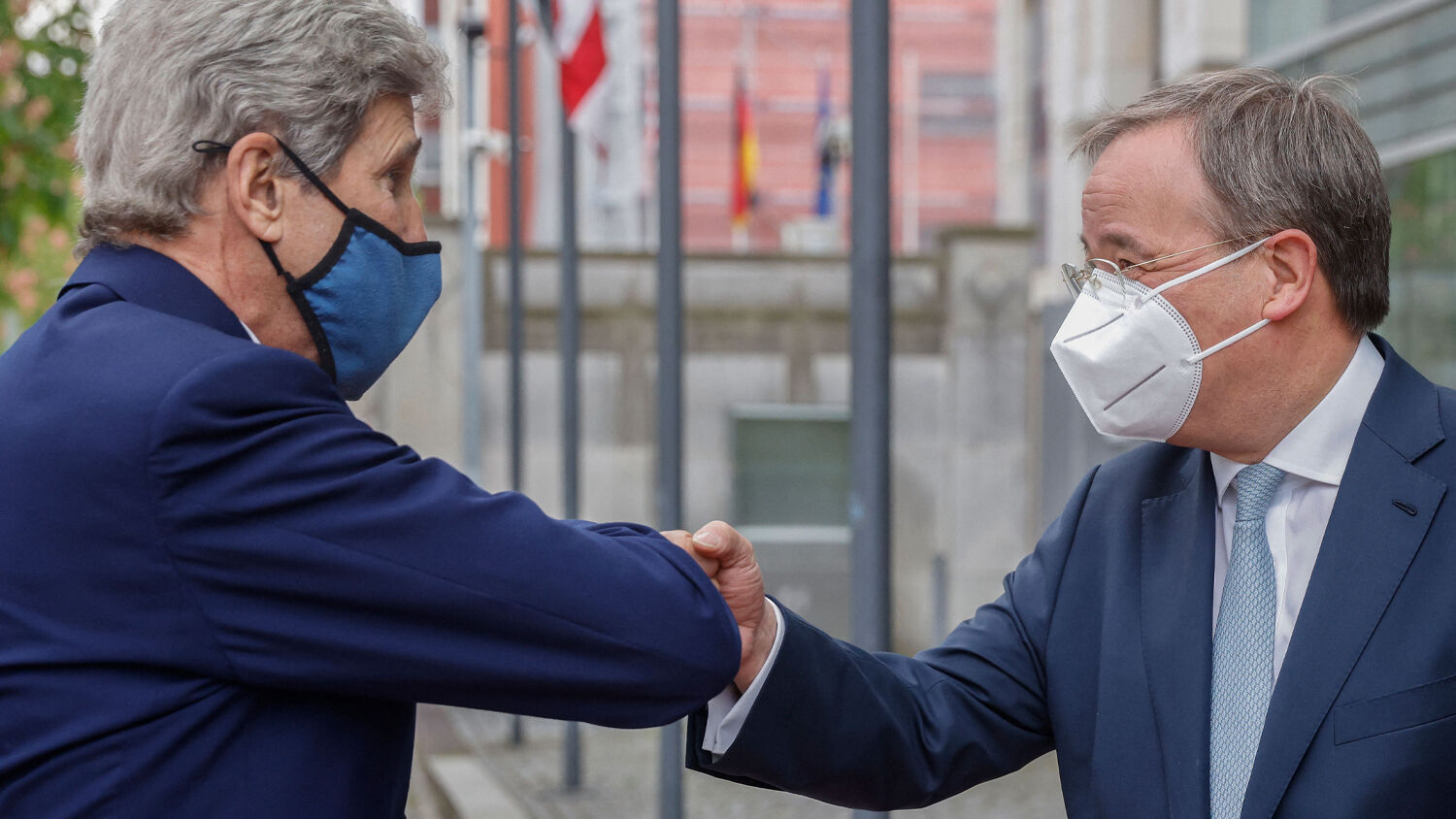 Armin Laschet ®, chairman of the German Christian Democratic Union (CDU) meets with U.S. Envoy for Climate State John Kerry outside the Representation of the State of North Rhine-Westphalia in Berlin on May 17, 2021.
ODD ANDERSEN/AFP/Getty Images

A little-known pact being negotiated between Washington and Brussels concerns the transfer of American sovereignty to globalist bodies outside the United States.

Rumors of the death of America’s trans-Atlantic partnership with Germany may have been exaggerated. Four years on from when United States President Donald Trump decided to suspend Transatlantic Trade and Investment Partnership negotiations, the Biden administration is in the midst of a diplomatic reset with the European Union.

On May 19, Armin Laschet, the leader of Germany’s Christian Democrat Union, said that a large free-trade area encompassing the U.S. and the EU should be a goal of both powers. “Europe’s place is at the side of the U.S.A., is at the side of Canada,” he told the Konrad Adenauer Foundation. “And we need a revival with new themes, with a new dynamic of the trans-Atlantic relationship. And this will revolve around trade issues—a large free-trade area as an ambition, but also a common climate foreign policy.”

Yet the Transatlantic Trade and Investment Partnership that Laschet is proposing is much more than a free-trade zone. Some have described it as an economic counterpart to the North Atlantic Treaty Organization military alliance. In addition to establishing a trans-Atlantic free-trade area, it would harmonize U.S. and EU regulations governing industrial standards, labor laws and intellectual property rights. To enforce these harmonized regulations, the European Commission is insisting on an Investor-State Dispute Settlement Mechanism. As reported by George Monbiot at the Guardian, these mechanisms would allow huge corporations “to sue governments before secretive arbitration panels composed of corporate lawyers.”

Such arbitration panels would bypass domestic courts and override the will of national legislatures. They would subject the U.S. to the same type of antidemocratic, technocratic regulation that member states of the EU endure. If Congress passed a law in violation of the new trans-Atlantic regulations, the U.S. government would have to use taxpayer funds to compensate foreign corporations for their loss. According to a leak published in December 2013, former EU Trade Commissioner Karel de Gucht proposed that a Regulatory Cooperation Council meet twice a year and prepare a regulatory program. This council would be composed of senior-level representatives from the European Commission’s General Secretariat of the Council and the United States’ Office for Information and Regulatory Affairs.

So, if Joe Biden and Armin Laschet get their way, the Transatlantic Trade and Investment Partnership will transfer U.S sovereignty to regulatory bodies outside the United States.

Even though many people in both the U.S. and the EU do not want to surrender sovereignty to corporate regulatory bodies outside their nation, the European Commission says the Transatlantic Trade and Investment Partnership will boost the EU economy by $146 billion and boost the U.S. economy by $110 billion. And many geopoliticians claim this boost is necessary for the democratic West to beat the authoritarian East. A Citigroup report forecast that Western Europe will only account for 7 percent of the global economy by 2050, while “developing Asia” will account for 49 percent. So, to reverse this trend toward European decline, corporatist technocrats are pushing for the merger of U.S. and EU economies.

During a 2016 address at a German-American Cultural Foundation luncheon, former German Defense Minister Karl-Theodor zu Guttenberg touted the Transatlantic Trade and Investment Partnership as vital to trans-Atlantic security. “It’s an enormously strong factor, and it’s highly underestimated,” he said. “It ties us more together, and it would be an illusion to believe that either the U.S. or we would be capable of tackling any of those challenges we are facing right now just by ourselves. Isolationism is not a solution ….”

In a 2013 New York Times op-ed, Guttenberg and Pierpaolo Barbieri likened the Transatlantic Trade and Investment Partnership to the 1957 Treaty of Rome—the agreement that established the European Economic Community and laid the foundation for the European Union. “Given the complexity of the deal, it may be best to seek what Commissioner De Gucht called a ‘living agreement,’ one that can be furthered if and when the politics allow,” they wrote. “The open-ended nature of the groundbreaking 1957 Treaty of Rome, which enshrined the concept of an ‘ever closer union’ in Europe, should be used as a template.”

What Laschet, Guttenberg and their allies are advocating is the economic merger of the United States with the European Union. The bureaucratic cabal that runs the EU wants to engulf the U.S. into its corporatist empire.

Ironically, America is responsible for creating many of the globalist movements that threaten it today. The Trumpet has reported on how the U.S. government cooperated with the Catholic Church and former member of the Nazi Party to build a European superstate capable of helping it oppose the Soviet Union.

In 1948, influential New York Times journalist Clarence Streit laid out his idea for the eventual merger of the U.S. and Europe in testimony before the U.S. Congress House Committee on Foreign Affairs. “Whatever power they can achieve as two separate unions—a United States of Europe and a United States of America—they can achieve far better by forming one union,” he explained. A year after his testimony, Streit joined forces with former Supreme Court Justice Owen J. Roberts to start a political-action unit called the Atlantic Union Committee. A key supporter of this committee was former Belgian Prime Minister Henri Spaak—a founding father of both nato and the European Economic Community.

Karl-Theodor zu Guttenberg’s grandfather, Karl-Theodor Freiherr von und zu Guttenberg, cosigned the Declaration of Atlantic Unity with Clarence Streit and 240 other leaders from across Europe and the United States. The purpose of this 1963 declaration was to create a trans-Atlantic economic zone similar to the Transatlantic Trade and Investment Partnership agreement currently being negotiated.

The 1963 agreement never came to fruition because Americans were reluctant to surrender national sovereignty to globalist bodies and Europeans feared being swallowed up by a much more powerful U.S.

Such fears persist to this day. For this reason, it’s unlikely the Transatlantic Trade and Investment Partnership will be actualized through negotiations. Yet the Bible does foretell that a corporatist empire will straddle the Atlantic Ocean just before Jesus Christ’s return. This empire will be led by Germany and the Vatican and will cause the “merchants of the earth [to wax] rich through the abundance of her delicacies” (Revelation 18:3).

The Bible also foretells that America and Britain will turn to this German-led empire for help, but will be betrayed. In The United States and Britain in Prophecy, the late Herbert W. Armstrong showed how the English-speaking peoples who settled the U.S. and Britain descended from the ancient Israelite tribes of Manasseh and Ephraim, while the German-speaking peoples who settled central Europe descended from the ancient Assyrians.

“Ephraim allows himself to be mixed up with foreigners; Ephraim has become a cake unturned as it was baked. Foreigners eat away his strength, unknown to him; grey hairs are on him here and there, unknown to him. Israel’s pride shall confront and convict them; yet they will not come back to the Eternal their God, nor seek him, in spite of it all. Ephraim is like a silly, senseless dove, crying to Egypt, flying to Assyria; but as they fly, I fling my net on them, and bring them down like a bird, punishing them for their misdeeds” (Hosea 7:8-12; Moffatt translation).

Hosea often refers to the northern 10 tribes of Israel, which split away from the kingdom of Judah, as “Ephraim,” the most prominent tribe, and “Samaria,” the capital. Yet the prophecies of Hosea were spoken to Ephraim and Manasseh jointly when both tribes were ruled by King Jeroboam II and his successors. So, when Hosea says, “Ephraim is like a silly, senseless dove … flying to Assyria,” he is saying that America and Britain will look to the European Union as an ally just before these two nations are invaded and enslaved.

German leaders like Laschet and Guttenberg know that they need America’s natural resource wealth and industrial might to compete with China, and they are going to get these resources one way or another (even if that means a Molotov-Ribbentrop style pact with China in the short term).

Referring to the Vatican’s role in Europe’s rising church-state combine, Mr. Armstrong wrote in the October 1951 Plain Truth: “For, believe it or not, the United States of Europe—a Winston Churchill dream, an idea sponsored, aided, abetted and financed by the United States, is the very idea the pope will seize on—all ready-made, wrapped and labeled ‘made in U.S.A.’—ready to hand over to him! And in promoting this utopian idea, gullible, trusting America and Britain are creating the Frankenstein that shall destroy them!”

Building up the German-led European Union is one of the most foolish decisions America has ever made. America and Britain have forsaken God and put their trust in foreign allies. They will soon find out the hard way that these “allies” do not have their best interests at heart.

To read more about the dangers of America’s naive alliance with Germany, read editor in chief Gerald Flurry’s article “Alamogordo: A Mistake You Only Make Once.”