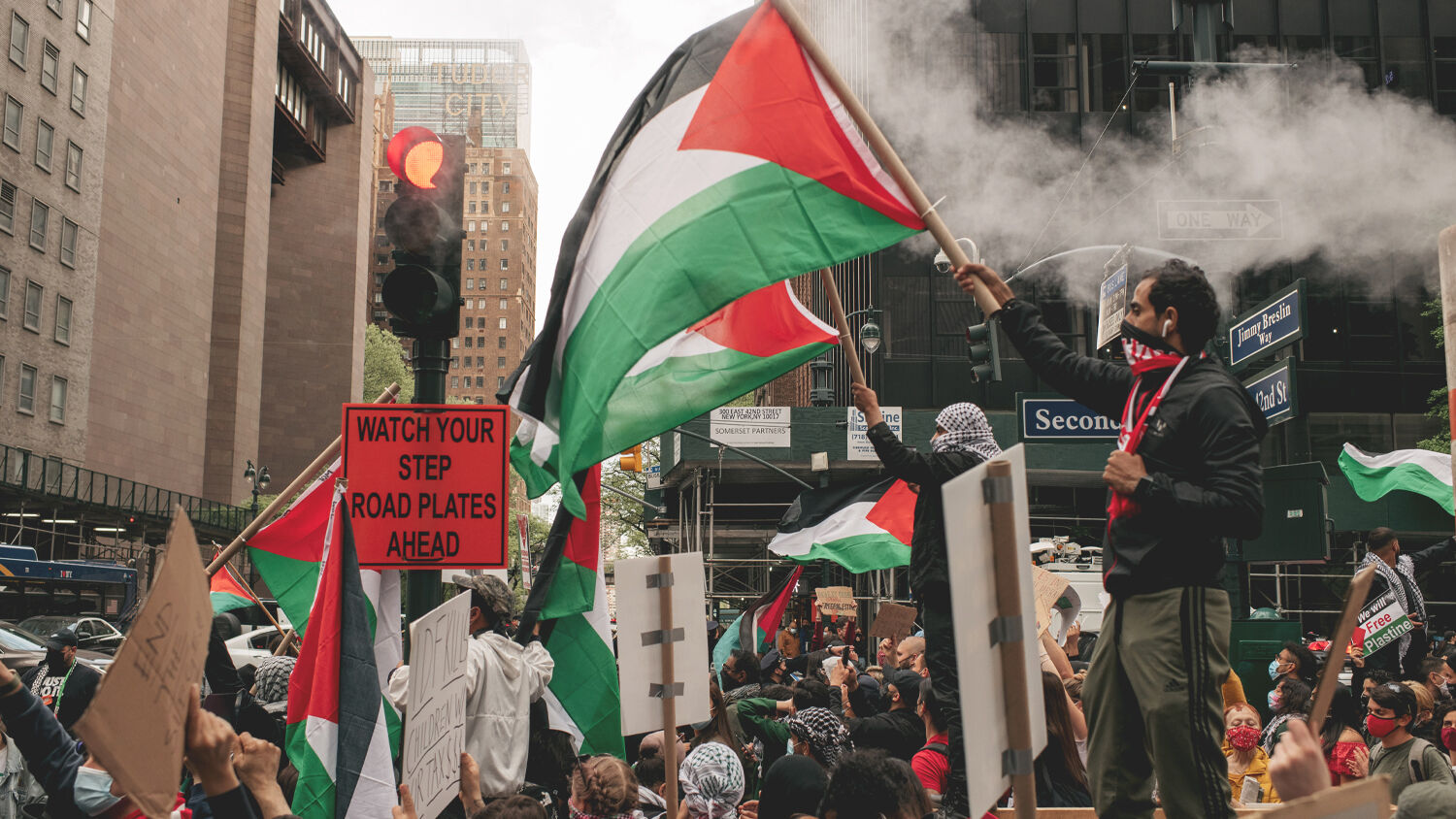 Protesters demanding an end to Israeli aggression against Palestine rally in Midtown Manhattan on May 11 in New York City.
Scott Heins/Getty Images

Jews around the world find no peace.

Israel is once again suffering from increased rocket attacks and terrorist threats. The hatred of Jews in the Middle East is enormous. But taking a global view makes Israel’s existential crisis even more real.

On May 11, a few dozen pro-Israel protesters were attacked by a thousand pro-Palestine protesters in Manhattan. Thousands have taken to the streets in New York and Los Angeles to express solidarity with the Palestinians and hatred for Israel. The rising hatred toward Israel in the United States is encouraged by the Democratic Party. Many more thousands in cities around the world are protesting Israel’s actions.

In Germany last week, anti-Israel protests erupted in Berlin, Hamburg and Hanover. Two synagogues were attacked and several Israeli flags were burned. In England, a convoy of cars drove through London while the passengers shouted swear words against Jews and called on people to “rape their daughters.” This rising hatred toward Israel in Britain is backed by the Palestinian-supporting Labour Party.

Whether the hatred in these countries is fueled by Islamic beliefs or supported by secular governments, the threat to Israel’s existence is real.

The United States and Germany present themselves as Israel’s greatest allies. But Germany’s Die Welt noted that analysts actually blame “an inactive U.S. government, which has no strategy for the region, and Germany” for the recent escalation (Trumpet translation throughout). Trumpet Middle East correspondent Brent Nagtegaal noted in “Will the America-Israel Alliance Survive the Biden Administration?”: “For the last four years, President Donald Trump led the most pro-Israel administration in American history. Before him, President Barack Obama led the most destructive. Now, with Joe Biden taking office, there is every indication that the pendulum will swing once more. According to Israeli commentator Caroline Glick, the Biden administration ‘is shaping up to be the most hostile U.S. administration ever.’”

In “Middle East Allies Be Warned: Obama Is Back,” Nagtegaal wrote: “This year, the Middle East may experience its most dramatic shake-up of the past half century. The Biden administration has quickly and decisively empowered Iran and its allies at the expense of America’s own historic allies, particularly Israel.”

The Hannoversche Allgemeine Zeitung noted on May 12: “With the change from U.S. President Donald Trump to Joe Biden, there has been a swing in dealing with Israel. … The new U.S. administration does not yet have an ambassador, a Middle East envoy or even a strategy for dealing with the situation in the Middle East. The current escalation of violence falls into this vacuum. The situation is so dramatic that a new intifada is to be feared.”

Die Welt headlined on May 17, “The Next Attack on Israel’s Existence Comes From the U.S.A.” The implications for this are far greater than any journalist understands.

“Israel has always been able to rely on Washington,” Die Welt noted. “But the current conflict shows how far the Democratic Party has slipped to the left. Demands by some congressmen are shaking the foundations of the Jewish state.”

Left-wing Democratic Congresswoman Alexandria Ocasio-Cortez tweeted: “Apartheid states are not democracies.” Democratic senator for Vermont Bernie Sanders tweeted: “The devastation in Gaza is unconscionable. We must urge an immediate ceasefire. The killing of Palestinians and Israelis must end. We must also take a hard look at nearly $4 billion a year in military aid to Israel. It is illegal for U.S. aid to support human rights violations.”

The devastation in Gaza is unconscionable. We must urge an immediate ceasefire. The killing of Palestinians and Israelis must end. We must also take a hard look at nearly $4 billion a year in military aid to Israel. It is illegal for U.S. aid to support human rights violations.

On Saturday, Rep. Ilhan Omar said it was “disgusting and immoral” for the U.S. to support this “violent bloodshed.”

“For Ocasio-Cortez and her followers do not specifically criticize the Israeli air attack on the building in Gaza on the weekend, in which the news agency AP had its offices in addition to the terrorist organization Hamas. Nor do they limit themselves to criticizing Israel’s prime minister, Benjamin Netanyahu, which is the order of the day in the United States anyway,” Die Welt wrote. “No, they attack Israel fundamentally and question the state.”

We are witnessing an attack on the foundation of the Jewish state. Israel is surrounded by enemies and its survival hinges on support from the U.S. What will happen if Israel loses that support?

2 Kings 14:26-27 state: “For the Lord saw the affliction of Israel, that it was very bitter: for there was not any shut up, nor any left, nor any helper for Israel. And the Lord said not that he would blot out the name of Israel from under heaven: but he saved them by the hand of Jeroboam the son of Joash.” Trumpet editor in chief Gerald Flurry explained:

“Israel” refers prophetically to America and Britain. These nations—as well as the State of Israel, or biblical Judah—are most prominent among those descended from ancient Israel (for proof, request a free copy of The United States and Britain in Prophecy, by Herbert W. Armstrong). So when “Israel” is spoken of in end-time biblical prophecy, these are the nations it concerns.

Verse 26 shows there are people working to blot out the name of Israel—and many of them are within America! This alone helps us to understand the seriousness of America’s affliction today.

Those trying to blot out Israel are back in control.

An Attack From Germany

The violence in Germany last week was particularly shocking and received a fair amount of international coverage. German Chancellor Angela Merkel’s spokesman Steffen Seibert said, “Anyone who uses such protests to scream their hatred of Jews is abusing the right to demonstrate.” He added that “our democracy will not tolerate anti-Semitic demonstrations.”

Spiegel Online reported on May 13: “The Middle East conflict often serves as a pretext for spreading anti-Semitic hatred—including in Germany, where Hamas-affiliated groups have long been collecting millions in donations. … According to the Office for the Protection of the Constitution, Hamas, which governs Gaza, has only 380 supporters in Germany. But the number of sympathizers is probably much higher.”

Philip H. J. Davies and Kristian C. Gustafson, the director and deputy director of Brunel University’s Center for Intelligence and Security Studies, write, “Iran’s German networks were its most important in Europe, because they were derived from the special political relationship between Iran and Germany that has existed since the 19th century. … Consequently, the working intelligence relationship between Germany and Iran was one that both parties made efforts to maintain” (Intelligence Elsewhere: Spies and Espionage Outside the Anglosphere).

The Netherlands Institute for War Documentation noted, “Close connections happened to exist between the German and the Iranian services. For example, this German service allegedly supplied computer hardware to Tehran, and it trained Iranian intelligence officers in Munich in 1992.”

Iran, the world’s greatest state sponsor of terrorism, is the self-declared chief enemy of Israel. Historically, Germany has come the closest to exterminating all Jewish life. Iran and Germany’s cooperation is concerning.

Officially, Germany denounces all hatred against Israel. But a recent investigation by the Israeli domestic intelligence service Shin Bet revealed on May 6 that funds of apparently multiple millions of dollars flowed from Europe via nongovernmental organizations (ngos) to the Popular Front for the Liberation of Palestine (pflp).

“[T]he details of the deep and often personal European relationships with the leaders of influential Palestinian and Israeli ngos were and remain closely guarded state secrets on the level of nuclear weapons,” Gerald M. Steinberg, professor of politics at Bar Ilan University, wrote for the Jewish News Syndicate in “The End of Europe’s Romance With Palestinian Terror?” “This strange and fundamental departure from the transparency that is central to democratic norms explains why year after year, the members of an ngo network linked to a terror organization, the Popular Front for the Liberation of Palestine, are among the main recipients of European funding. Since 2011, European governments have provided at least €200 million [us$241.7 million] to these organizations, including €40 million from the European Union, and probably more from subcontracting that is not reported and from grants that remain hidden.”

In “How Germany Finances Hatred” bild.de noted: “The largest employer in the West Bank and Gaza is unrwa, the relief agency for the Palestinians founded by the UN in 1949. In 2020, unrwa had a budget of €773 million. Top sponsor last year: Germany with €173 million, followed by the EU with €157 million. Only in fifth place comes a non-European country: Japan with €33 million.”

But it is not just the government. The German police reported 2,275 anti-Semitic crimes in Germany in 2020, more than at any time since record-keeping began in 2001.

Pforzheimer Zeitung wrote: “Germany has played its part in exploding hatred of Israel and Jews in the Palestinian territories. For years, Berlin has ignored warnings that German taxpayers’ money also finances Arabic textbooks that demonize Israel and declare Jews to be enemies of Islam. Likewise, the German government looks on idly as Palestinian President [Mahmoud] Abbas misuses international funds to generously ‘compensate’ families of terrorists. The worse the crime, the higher the reward. In the Palestinian autonomous regions, murderers of Jews are glorified as ‘martyrs,’ and schools and sports stadiums are named after them. The seeds of hatred are now sprouting.”

Where It Will Lead

Many officials have expressed solidarity with Israel. Many have condemned anti-Semitism. Yet anti-Semitic crimes are rising and Israel is surrounded by hostile Arab nations that seek its destruction.

What we see happening today is nothing new. Jews have been repeatedly persecuted by Muslims and so-called Christians. From Antiochus Epiphanes to Adolf Hitler, leaders throughout history have sought to eradicate Jewish life. The Bible has recorded much of this hatred and prophesies of more to come. “Hitler’s hatred of Jews goes much deeper than the world has ever even imagined. The main force of this emotion is Satan’s hatred for God!” Trumpet editor in chief Gerald Flurry notes in Germany and the Holy Roman Empire.

God would protect the Jewish nation if they would rely on Him and obey His commandments. Yet Israel is prophesied to look to another source for protection. As Mr. Flurry explains in The King of the South, Germany will enter the Middle East conflict. Israel will trust Germany for protection. This trust will be ill placed, however. We can already see growing hostility toward Israel throughout Germany.

Germany is prophesied to rally this hatred in an all-out attack. The real force behind this attack, however, is Satan himself. Satan’s hatred for the Jews is explained in detail in Germany and the Holy Roman Empire.

The good news is that we are about to see an end to all evil plaguing this world. Request a free copy of The New Throne of David, by Gerald Flurry, to learn how the final attempt to blot out the name of Israel will fail and how God will intervene to save mankind.