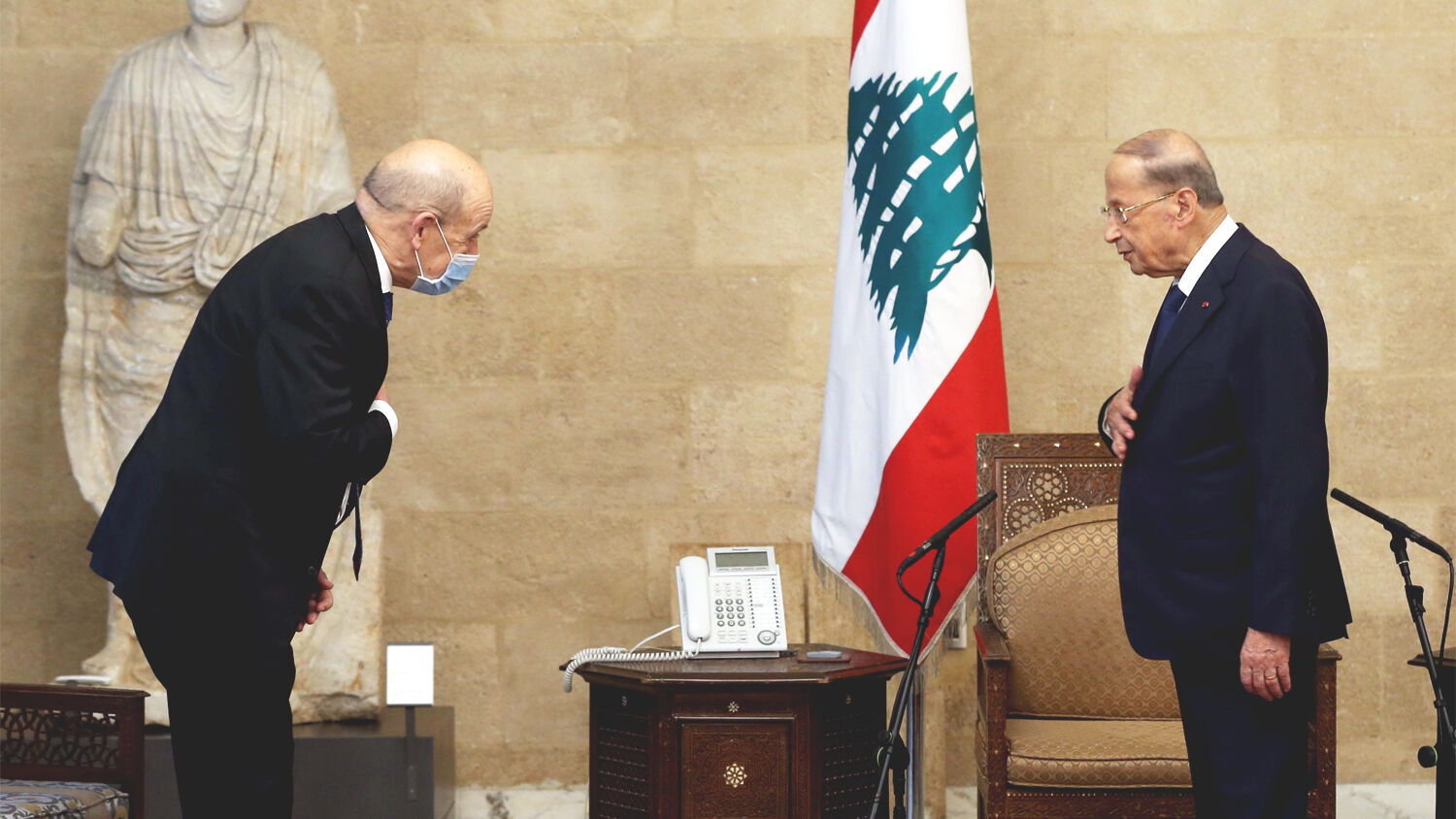 More proof that Lebanon is indeed a European issue

France is threatening to place penalties on certain Lebanese politicians who it views as impeding the formation of a government, said French Foreign Minister Jean-Yves le Drian, according to an April 29 press release. This may include barring entry to France or economic sanctions. Whatever the method, it will constitute a serious intervention in the political process of a foreign nation. By making this announcement, France has again confirmed that Lebanon is an important issue for Europe.

Le Drian announced his intentions at a press conference with his Maltese counterpart, Evarist Bartolo, in Malta’s capital city of Valetta. After discussing several other Middle Eastern issues, le Drian brought up a subject which he and Bartolo “talk about regularly”—Lebanon.

Ever since an explosion devastated the port of Beirut in August 2020, Paris and Berlin have taken an unusually strong interest in Lebanese politics. This includes rebuilding the country’s shattered industrial and logistics capacity and aiding in the effort to clean up hazardous material. Now, it also includes pressuring Lebanese politicians.

Le Drian stated that there has been a “serious deterioration in the economic, social and humanitarian situation” and implied that it has been worsened by “political leaders” who “continue to hinder the formation of a competent government able to reform the country.” He continued:

We’ve begun thinking with our European partners about the instruments at our disposal for increasing pressure on the players in a political system who are obstructing a way out of the crisis. And at national level we’ve started implementing restrictive measures as regards access to French territory against figures involved in the current political deadlock, or involved in corruption. And we’re retaining the possibility of adopting additional measures against all those who are hindering a solution to the crisis, and we’ll do so in coordination with our international partners.

The criteria for deciding which politicians will be placed on France’s blacklist are vague; anyone who is “obstructing a way out of the crisis” can mean virtually anything France wants it to.

Blacklisting politicians not only pressures the individual, but makes party leaders less willing to accept them into any new government, especially for key roles where travel to France, a close ally, will be necessary.

On May 6, le Drian held a little-publicized meeting with Lebanese President Michel Aoun, parliament speaker Nabih Berri and Prime Minister-designate Saad Hariri. Speaking to reporters, he warned that if Lebanon does not “act now in a responsible surge of effort,” the country “will face the consequences of this failure,” according to Arab Weekly.

There are two ways that France could succeed in bringing about its desired political result. It is possible that barring entry or imposing sanctions, once it materializes, will be enough to push Lebanese leaders to assent to France’s demands. However, it could also slow down the formation of a government and prolong the crisis, to the point where Lebanon has no alternative but to agree with French conditions in return for being rescued from civil war and economic ruin.

Lebanon is “a regional issue, it’s a Mediterranean issue, it’s an issue for the Europeans,” stated le Drian in his April 29 press conference.

Trade statistics and geography support this. For Lebanon, trade with Europe is already highly important. Greece, Italy, Germany and France together account for 25.9 percent of all Lebanon’s imports. For Europe, it is Lebanon’s political direction that matters. A Lebanon ruled by Hezbollah poses a security threat to the Mediterranean’s busy shipping lanes, a situation Europe is eager to avoid. For France in particular, this could also mean a steady stream of refugees; the second-most popular language in Lebanon is French.

Given France’s intrusion into Lebanese politics, one might believe that such pressure tactics will eventually turn Lebanon away from Europe. However, there is still a desire for French rule in Lebanon. In the aftermath of the explosion, some expressed a desire for France to restore its colonial mandate over the country.

The Trumpet believes that Lebanon will be drawn further into Europe’s camp.

In the aftermath of the Beirut port disaster, Trumpet editor in chief Gerald Flurry wrote an article titled “Why We Told You to Watch Lebanon.” In it, he wrote that “this blast will likely ignite a radical political change within the nation.”

That change is being encouraged by a power that was prophesied to become deeply involved in Lebanon: Europe.

“To longtime Trumpet readers, the significance of this moment is clear,” wrote Mr. Flurry. “We have been writing about this transformation in Lebanon for years, based on a powerful biblical prophecy.”

That prophecy is found in Psalm 83. This psalm prophesies of an alliance forming right now, between Europe and certain Middle Eastern nations. Germany, leading the European power, is mentioned in verse 8 by its ancient name, Assur, denoting Assyria. As we explain in our article on this subject, “A Mysterious Prophecy,” one of Europe’s Middle Eastern allies is Gebal (verse 7), a name the Bible uses for Lebanon.

France and Germany’s growing involvement in Lebanon show that a more powerful Europe is on its way, one which is to become much more active in the Middle East. To learn how Europe’s growing role here will change the world you live in and have profound effects far beyond the Middle East, read “A Mysterious Prophecy,” by Gerald Flurry.