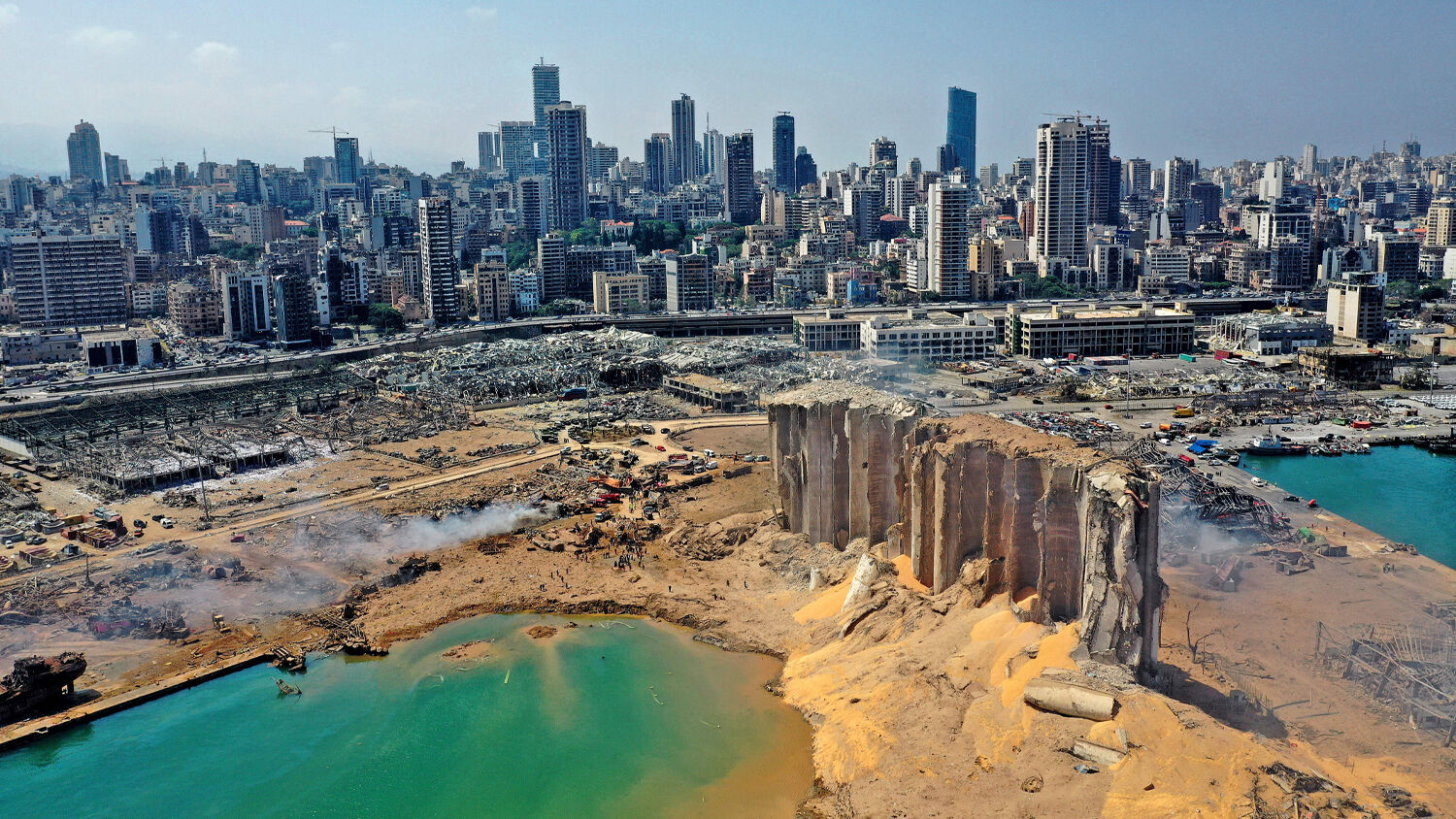 An aerial view shows the massive damage at Beirut port’s grain silos and the area around it on August 5, 2020, one day after a massive explosion hit the heart of the Lebanese capital.
AFP/Getty Images

But if Beirut wants Europe’s billions, it will have to comply with Germany.

Germany has proposed a plan to rebuild downtown Beirut, the Lebanese port city devastated by an explosion in August 2020. The European Investment Bank and International Monetary Fund would finance the project. Behind this gesture is a competitive race for influence in this key Middle Eastern country, one in which Germany’s contribution is growing.

Between €2 billion and €3 billion (up to nearly us$3.6 billion) will be invested in Beirut’s reconstruction. Once completed, the total cost of the project may fall between $5 billion and $15 billion and has the potential to create 50,000 jobs. Berlin will hire private German companies to rebuild the port, as well as an area of about half a square mile around it. A comprehensive outline describing the extensive rebuilding plans was due to be presented to Lebanese officials on April 7.

Even before this announcement, private German companies had been competing with French companies for contracts to begin the numerous rebuilding projects. French logistics company cma cgm is also interested in rebuilding Beirut’s port.

Yet all this investment is not without conditions.

According to Euractiv, diplomatic sources from Europe stated, “This plan is not going to come without strings attached. Germany and France want first to see a government in place committed to implementing reforms. There is no other way around it ….”

Germany, like France, has made the formation of a functioning government the condition for access to greater financial aid and larger rebuilding projects. It is likely that German diplomats and politicians are wary of Hezbollah’s influence in the country. The formation of a working government, friendly to Europe, would decrease the likelihood that European money would end up in the hands of Hezbollah or lining the pockets of corrupt politicians.

This offer to Lebanon marks greater German and European Union involvement in the country. If successful, it could ensure the Lebanese government will cooperate with Europe more closely in the future.

Lebanon is closer to meeting Germany’s conditions than Syria is. Financial incentives will likely help this process. Change may not happen immediately, given the level of instability and chaos in Lebanon. With the Lebanese economy in crisis, the nation is “running out of time before total collapse,” as French Foreign Minister Jean-Yves le Drian warned on March 11. The longer this continues, the more likely the country is to turn to France and Germany for help.

Since the August 2020 explosion at Beirut’s port, Lebanon has experienced seismic changes. Trumpet editor in chief Gerald Flurry wrote in the October 2020 issue “Why We Told You to Watch Lebanon”: “Following the explosion, the streets of the capital are burning with anger against Hezbollah and the Lebanese government. France and Europe are watching and appear to be ready to support the people in throwing off Iranian influence.”

Since then, Europe has been using the crisis to present itself as the solution to the country’s woes. However, there are still “strings attached.” If Lebanon wants those billions of euros flowing into its infrastructure, it will have to form a government that rejects Hezbollah and Iranian influence, working with Europe instead.

The Trumpet watches deepening cooperation between Berlin and Beirut because of specific Bible prophecies, that foretell the country’s alignment with Europe.

In his booklet The King of the South, Mr. Flurry discusses two major alliances revealed in the Bible that will shape the Middle East in our day. One is led by Iran, “the king of the south”; the other is an alliance called “the king of the north,” a united Europe led by Germany.

Psalm 83 adds that Europe will cooperate with certain Middle Eastern nations more closely, in opposition to Iran: “For they have consulted together with one consent: they are confederate against thee: The tabernacles of Edom, and the Ishmaelites; of Moab, and the Hagarenes; Gebal, and Ammon, and Amalek; the Philistines with the inhabitants of Tyre; Assur also is joined with them: they have holpen the children of Lot. Selah” (Psalm 83:5-8).

In The King of the South, Mr. Flurry writes: “Here are the modern names of these nations, as taught at Ambassador College under Herbert W. Armstrong: Edom—Turkey; Ishmaelites— Saudi Arabia; Moab—Jordan; Hagarenes—anciently dwelt in the land known as Syria today; Gebal—Lebanon; Ammon—also Jordan.” Assur refers to modern-day Germany.

Germany and European nations are prophesied to become more deeply involved in Lebanon. As Lebanon’s crisis deepens, watch for cooperation with Europe to increase and Iran’s influence through Hezbollah to be challenged. For more about Lebanon’s future, read The King of the South, by Gerald Flurry.