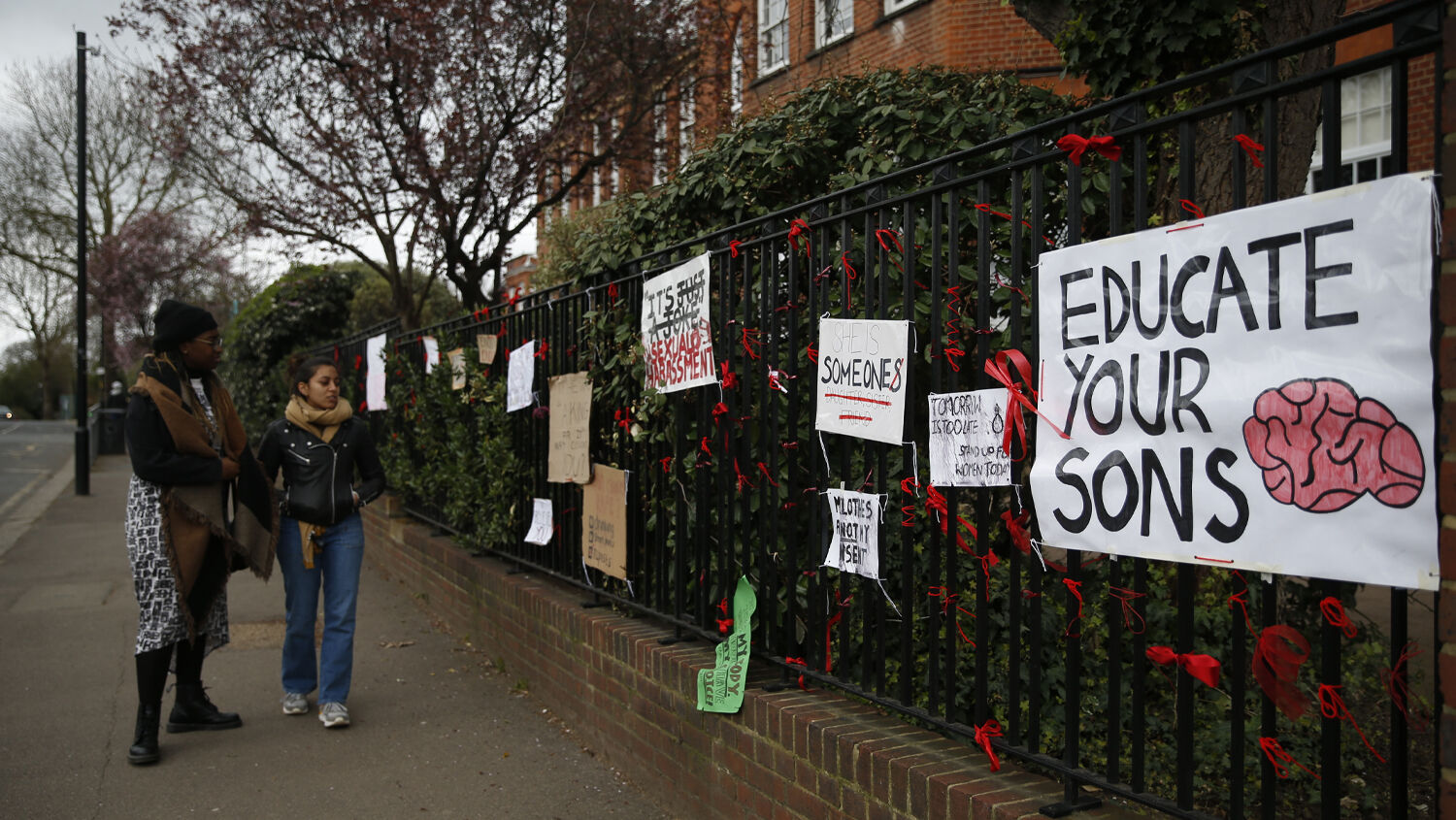 Women read placards saying ‘It’s sexual harassment’, ‘She is someone’ and ‘Educate your sons’ attached to the fence outside James Allen’s Girls’ School (JAGS) on March 28, 2021 in London, England.
Hollie Adams/Getty Images

The United Kingdom has been shocked by new reports of rampant sexual abuse in the nation’s schools and universities. Over 13,000 people have posted reports to the Everyone’s Invited website, which was set up to allow people to anonymously report their experience.

For the most part, the reports are from girls being harassed, or even attacked, by boys their own age.

Many of Britain’s top schools and universities have been drawn into the scandal. Girls are even reporting attacks that took place while they were in elementary school.

The National Police Chiefs’ Council lead for child protection, Simon Bailey, warned that every police force will soon be required to investigate the allegations. “I think that there is a huge societal problem with what young men are viewing online, the sexualization of women, and the complete blurring of those lines in terms of what is a healthy relationship,” he said.

The government has set up a helpline to deal with the problem and is launching a new investigation.

The allegations force us to ask, What have we done to our children?

Soma Sara set up Everyone’s Invited in June 2020 to share her experiences of sexual assault. It quickly began receiving reports, but the stories have exploded in recent weeks.

The victims describe being raped at parties, inappropriately touched and groped, and having nude pictures of themselves spread around the school.

“Where once we might have expected only adult women to have to deal with such harassment, our daughters now find themselves confronting an aggressive sexual culture when they are barely out of primary school,” wrote the Daily Mail.

Female teachers are also complaining. The nasuwt teaching union said some of its female members are afraid of walking down school corridors alone.

Private schools are over represented in the complaints. In the UK, the very wealthy sometimes look at parenting as yet another task to outsource to someone else.

Unfortunately, confronted with the problem, society seems determined to look in all the wrong places for solutions. Just like after the #MeToo movement, there’s a lot of talk about “toxic masculinity.” Some teens are seeing their lives destroyed by a single, unsubstantiated accusation, with no due process. They can no longer show their face at school or among any of their friends because of a single anonymous post.

But this scandal goes beyond a few individuals or even schools. And the culprit is not masculinity. At almost every level, society has contributed to this behavior.

Widespread pornography is, rightly, being condemned. Many of the boys are copying acts they’ve seen in online pornography or heard referred to in music videos.

It’s easy to point the finger at pornography for this crisis. It’s not personal—and no one will take responsibility for allowing teens to access it. Parents haven’t protected their children. Many complain that they can’t do this without taking away their children’s smartphones or monitoring their Internet access. They’re afraid to take these steps to protect their children.

The government has done little, if anything, to protect children from online pornography. What basically amounts to pornography is easily available on public television.

And then there’s our “anything goes” culture. Schools and parents are taught that teenage sex is fine and that they shouldn’t judge another’s choices. This trend is so pronounced that when one university found some of their students had been working as prostitutes to pay their school fees, they didn’t try to stop it. Instead, they published a “Student Sex Work Toolkit.” A student said it amounted to little more than “a helpful how-to guide to get into the sex trade.” The knee-jerk reaction of school officials was, If these young people want to be prostitutes, that’s their choice; our job is to try to help them in that and keep them safe.

The result is a culture that treats all kinds of sexual practices as normal—even for teenagers. When victims report receiving nude pictures or being groped, authorities laugh it off. When a girl is asked for nude images, she doesn’t run away. Instead, she allows herself to be pestered into handing them over—and before she knows it, they’ve been sent to all the boys in the school.

One in four of America’s teenage girls deliberately harm themselves, according to a 2018 study. This usually involves cutting themselves with knives or deliberately burning themselves. The suicide rate for teen girls is at a record high. It is no exaggeration to say that our child rearing is deadly. And no one is really doing anything about it.

We have failed our young people on so many levels.

“[T]he whole head is sick, and the whole heart faint”—that is God’s description of today’s society (Isaiah 1:5). “From the sole of the foot even unto the head there is no soundness in it; but wounds, and bruises, and putrifying sores: they have not been closed, neither bound up, neither mollified with ointment” (verse 6).

God tells us: “You burn with lust among the oaks and under every spreading tree; you sacrifice your children in the ravines and under the overhanging crags” (Isaiah 57:5; New International Version). We adults have created a sex-obsessed culture. We’ve gotten rid of most of the moral restraints on previous generations. Lust is lauded and displayed constantly and publicly. It is destroying our children.

In his free booklet Isaiah’s End-Time Vision, Trumpet editor in chief Gerald Flurry writes: “Anciently the Israelites sometimes physically sacrificed their own children. Today we sacrifice our youth spiritually when we give them no uplifting vision. We sacrifice them to sexual lust and fornication. The Internet alone does $10 billion to $13 billion worth of business in pornography every year just in America! It is the most profitable online business. We also sacrifice our children to demoniac music, drugs and greed. In the nations of Israel, this is done even before our youth are taught to use their minds! They get so hooked on coveting that they never even learn about the wondrous potential of our God-like minds!”

Here at the Trumpet we aim to “[c]ry aloud, spare not, lift up thy voice like a trumpet, and shew my people their transgression” (Isaiah 58:1). Why? So they can do something about it and change. And if they don’t, God will. A loving God won’t stand by while we destroy generation after generation of young people.

We often write about the punishment God is preparing against our societies. But it is all for a great purpose. Our way of life is causing real harm. These sins are so entrenched in society that it will take something massive to change it. But God won’t simply let the status quo run its course. He is actively working, right now, to bring a better world. Stories like this show us how necessary that world is.

If you’d like to know more about this world God is preparing, read our free booklet The Wonderful World Tomorrow—What It Will Be Like, by Herbert W. Armstrong.