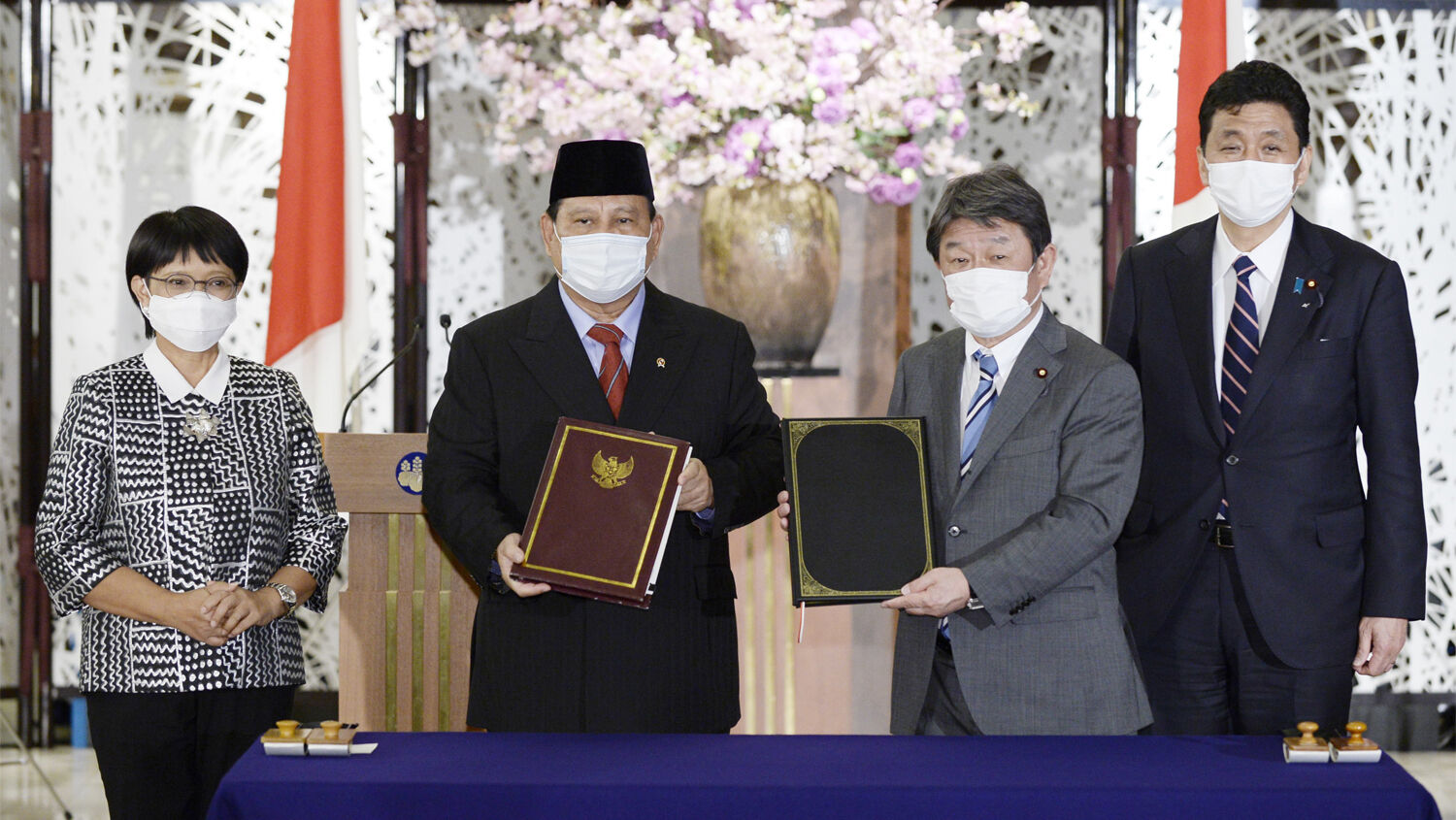 Japan is becoming the linchpin of an anti-Chinese alliance in Asia.

Japan and Indonesia signed a defense agreement in Tokyo on March 30. The talks, involving the two countries’ foreign and defense ministers, brought Tokyo and Jakarta closer than ever.

The deal includes Japan committing to selling eight Mogami-class frigates to Indonesia. Japan committed to delivering four of the frigates, which weigh 3,900 tons each, by 2023 at the earliest. The other four would be constructed in Indonesia, at the state-owned Surabaya shipyard. Mitsubishi unveiled the Mogami-class frigates earlier this year. They include a stealthy design that makes enemy radar detection difficult, aquatic drones for hunting mines and long-range anti-ship missiles. Various automated features also allow it to have a smaller crew than other warships.

The agreement also has Japan and Indonesia participating in joint military exercises. Japanese Prime Minister Yoshihide Suga said he hoped this would be the “foundation of further security cooperation between the two countries.”

Crucially, Japan and Indonesia have agreed to develop Indonesian islands in the South China Sea.

The South China Sea has been an especially volatile region of the world for the past few years. China has been laying claim to offshore islands outside its territorial jurisdiction. It has unilaterally annexed many islands that nominally belong to the Philippines especially.

The joint Japanese-Indonesian development of offshore islands is a response to this.

“[Indonesia and Japan] also shared serious concerns about the continued and strengthened unilateral attempts to change the status quo by force,” said Japanese Foreign Minister Toshimitsu Motegi. “[Defense] Minister Kishi and I expressed serious concerns about recent developments in the region, such as China’s coast guard law.” Mr. Motegi was referring to a new law where Chinese warships can open fire on unauthorized boats entering Chinese waters. This presumably includes the disputed waters around annexed islands.

This kind of behavior is making both island nations very edgy. It’s not surprising that Japan is turning to its populous, economically powerful neighbor to the south for assistance.

But Indonesia isn’t the only country Japan is courting. For some time, Japan has been building an anti-Chinese coalition among Indo-Pacific countries.

Last September, Japan and India signed a landmark military pact, allowing both nations to transport each other’s troops. Japan can also use Indian military bases in the Andaman and Nicobar Islands in the Indian Ocean. India, meanwhile, can use Japan’s base in Djibouti, Africa.

Japan has also been selling military equipment to the Philippines. The Philippine Defense Ministry signed a contract for four radar systems worth about $100 million. The agreement was signed last August. Until that point, Japan had exported military technology parts but not the finished product. Selling the radar to the Philippines was a first for Japan since 2014, when it lifted its ban on weapons exporting.

Last October, Japan signed an agreement with Vietnam similar to the one with Indonesia. The agreement streamlined Japan’s ability to export military equipment and technology to Vietnam. Hanoi also has territorial claims in the South China Sea islands. China’s behavior in the region is making the Vietnamese nervous; Vietnam also shares a direct land border with China.

The populations of Japan, India, Indonesia, Vietnam and the Philippines add up to more than 1,9 billion; that’s over a quarter of the world’s population. Japan, India and Indonesia are all G-20 economies. Combine that economic might with such a large population, sprinkle in Japanese technological prowess, and you have a formidable fighting force.

The Trumpet has long predicted Asia uniting into one colossal military alliance. We base our predictions on biblical scriptures like Revelation 16:12 and Revelation 9:16. These verses describe an enormous power bloc called “the kings of the east” that amasses an army of 200 million men. A related prophecy in Ezekiel 38 shows that Russia would be the leader of this bloc. (For more information, please request our free booklet The Prophesied ‘Prince of Russia’.) China has the largest population in the world and a formidable military, so such an alliance would be unthinkable without Beijing involved.

But Russia and China won’t be the only Asian nations to form that alliance.

We’re seeing some of the largest, strongest nations in Asia form a military partnership today. Yet Japan, Indonesia and others are forming this partnership to counter China.

Suppose, however, another military superpower were to threaten Asia as a whole. Suppose a superpower comes on the scene that scares Russia, China, Japan and India together. Suppose a threat appears that catches countries like Japan and Indonesia off guard. Suppose that threat causes them to scramble and join forces with Russia and China. Suppose all Russia and China have to do is join a pan-Asian alliance Japan has already made.

The Bible says that such a threat will appear. It says that this threat will bring everybody from Moscow to Tokyo together in one grand alliance. And when this alliance forms, it’s going to impact the lives of every human being on the planet.

To learn more, request our free booklet Russia and China in Prophecy.