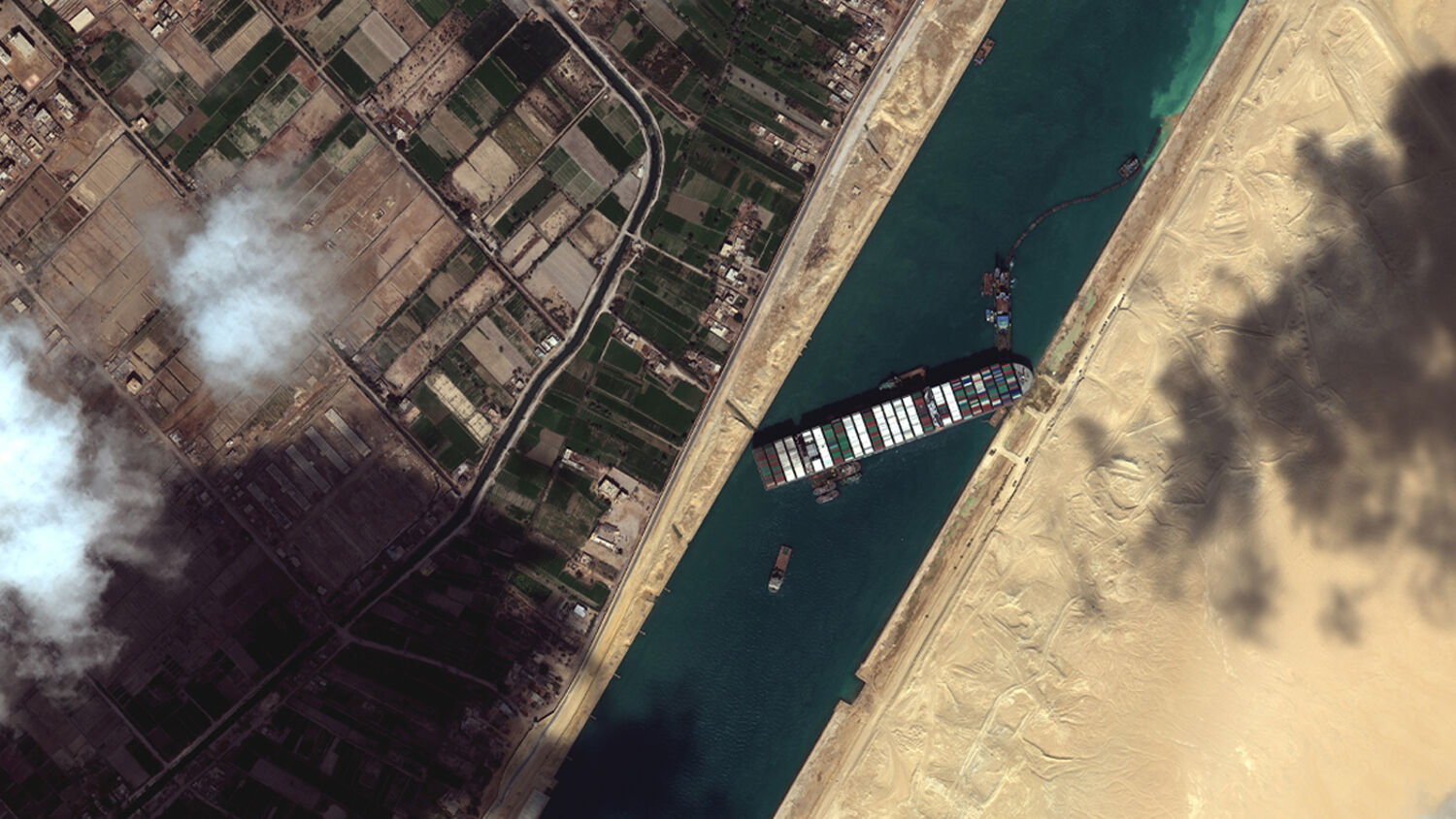 The container ship Ever Given blocks the Suez Canal on March 27.
Satellite image © 2021 Maxar Technologies/GettyImages

The weeklong blockage has put Germany and its military on high alert.

One of the world’s most important trade routes, the Suez Canal, was blocked by the container ship Ever Given on March 23. On Monday, March 29, the ship was finally freed. This incident grabbed the world’s attention. Bloomberg noted that the blockade cost $9.6 billion in commercial losses every day. But the continent most affected by it was Europe. The German Chemical Industry Association noted last Thursday: “The disruption comes at a bad time. Capacity utilization in the chemical industry is high. Demand for supplies from Asia is correspondingly strong.” Europe’s dependability on the Suez Canal was exposed. The blockage teaches a crucial lesson that illuminates a major Bible prophecy.

China has been Germany’s most important trading partner for years, with a mutual trade volume of more than $250 billion last year. “Trade from Asia to Europe is passing through the eye of the needle, the Suez Canal, along with around 13 percent of all world trade,” bild.de wrote. “For chemical imports, the share is even higher, at around 16 percent. In any case, the supply chains are currently under pressure due to the coronavirus pandemic.”

German Chemical Industry Association chief economist Henrik Meincke warned during the blockage: “The indirect effects are likely to be even stronger. If production at our industrial customers in Europe comes to a standstill because deliveries from Asia fail to arrive, demand for chemicals will fall.”

Trumpet contributing editor Richard Palmer wrote in his article “Dire Straits”: “Everything you own probably once traveled on a ship. Whether you live in an island nation like I do or a continental expanse like the United States, your clothes, your appliances, your food, your vehicle, your furniture, your copy of this magazine all relied, in some way, on ships to come into existence.”

This is especially true for Germany. Due to a lack of natural resources, its industry heavily depends on imports. As one of the largest exporters in the world, its economy also largely depends on open trade routes. Naturally, Germany is concerned about the security of its traded goods.

The official website of the German military noted about the Suez blockage: “This single incidence has strategic importance because of its global impact. It is the task of the Naval Operations Command in Hamburg to carefully monitor such and other incidents as well as to analyze them for the German Armed Forces and the Ministry of Defense. The service is a department of the Naval Command’s Operations Division.” In other words, Germany’s military is on high alert about any threats to these global trade routes.

The closure of so-called maritime choke points like this one is always a real danger. In the event of possible international crises, for example, just a few sea mines could de facto completely close off the Suez Canal or other straits such as the Strait of Hormuz. Terrorist attacks, for example on locks or ships, cannot be ruled out either. The Suez Canal itself was last closed for eight years until 1975 during the Israeli-Arab wars.

One nation in particular concerns Europe: the chief sponsor of terrorism—Iran.

In his 2015 article “Iran Gets a Stranglehold on the Middle East,” Trumpet editor in chief Gerald Flurry wrote: “This terrorist nation has become the gatekeeper of the Red Sea and the Suez Canal.” Mr. Flurry then quoted Michael Segall, who wrote: “If the Shia rebels gain control of the Bab el-Mandeb strait, Iran can attain a foothold in this sensitive region, giving access to the Red Sea and the Suez Canal, a cause of concern not only for its sworn rivals Saudi Arabia, Egypt and the Gulf states, but also for Israel and European countries along the Mediterranean. Arab commentators in the Gulf have warned in recent years about this Iranian push” (Nov. 3, 2014).

Mr. Flurry added: “While Arab commentators may have speculated about this Iranian push in recent years, we have warned about this push for almost a quarter century!”

Iran has been amassing more and more military power—provoking a confrontation with the West. According to the belief of many Shiites, their version of the Messiah will return as a result of global conflict. Iran, therefore, looks to provoke confrontations to the point where they escalate globally. If Iran can amass enough power to control the Suez Canal, one can be sure Europe will respond. The recent blockage shows just how dependent Europe is on this important waterway.

For years Mr. Flurry has drawn attention to these prophecies. We are now gaining a better insight into how they could play out. For in-depth understanding of these prophecies, request a free copy of The King of the South, by Gerald Flurry.