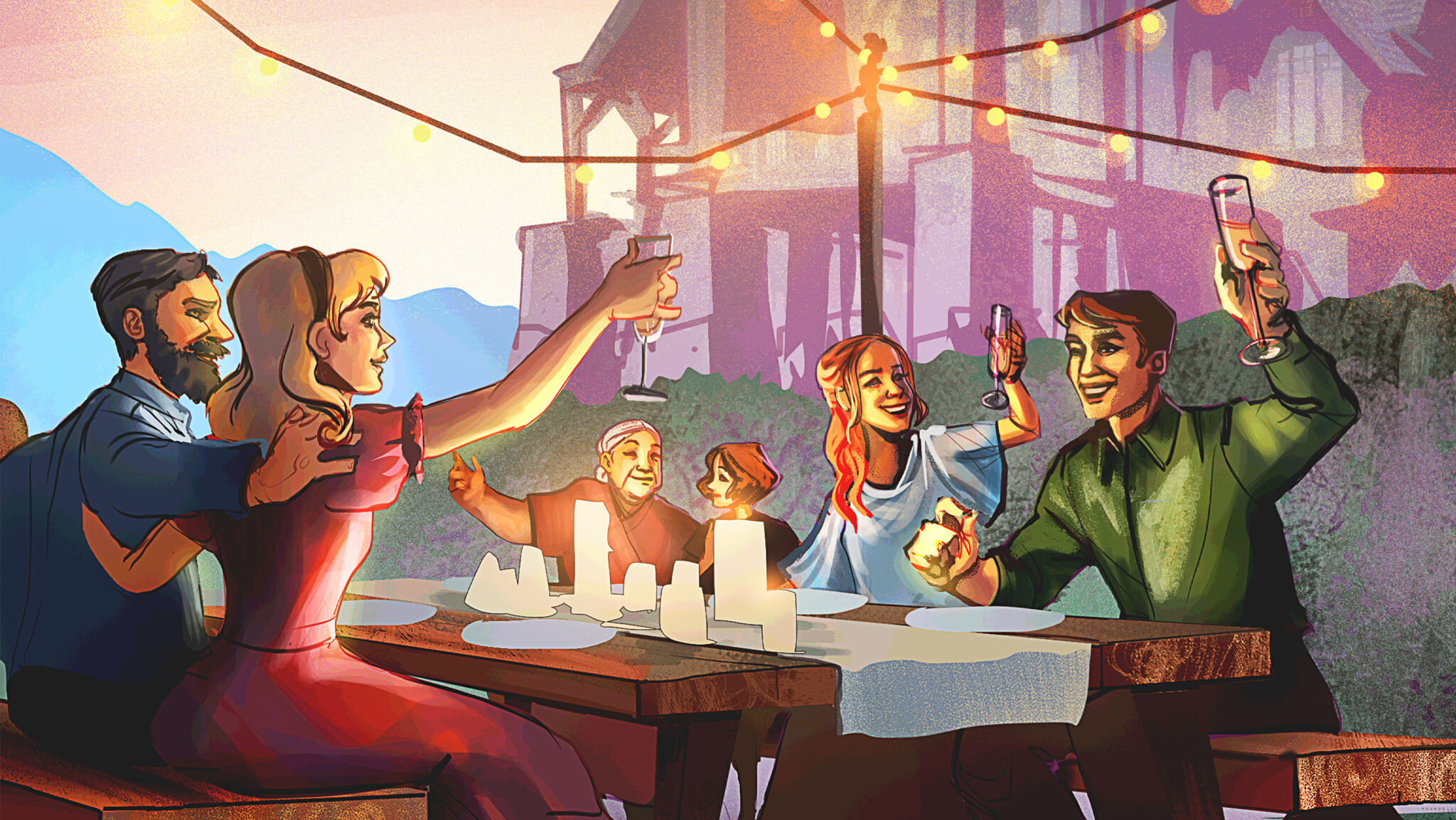 Through the rafters, and where the rafters will be, daylight is fading. You chisel one last mortise, then box up your saws, squares and drills to tidy up and protect against tomorrow’s morning dew. No need to protect against anything else. Good thing, since you’ve never owned anything with a lock or key.

From the other side of the walls, and where the walls will be, comes the buzz of voices. The young family whose home you are timber-framing is setting supper on a stack of beams along with father, mother, brothers, sisters, nieces, nephews and cousins who have walked over from their homesteads to help build this one.

Your own homestead needs your attention, so it is a sacrifice to be here instead. But there was a need, you could help, you said you would, so here you are. In fact, even though you could be done by now, you are putting in extra time, effort and materials just to give that roof a couple more centuries of durability and a bit more beautiful geometry. You are not charging extra: In fact, you’re not even telling them. It’s enough satisfaction to make this house everything it can be for this family and to be part of what it represents in the larger sense: the hard work, discipline, fairness, generosity, camaraderie and family that went into building the place where this family and generations unborn will live most of their lives and build most of their character.

In a way, this jobsite is a fiction. Homes are not built like this. They are built by development groups, bank stockholders, investment funds, government agencies, title companies, sales firms, roving work crews and manufacturers, and inhabited by a series of mortgage debtors in an impersonal process through which each entity gives as little as possible and takes as much as possible. In fact, this fundamental attitude of selfishness saturates the human nature of every person in every sector of every economy in every country of every era. Our very nature is self-oriented, self-conscious, self-esteeming, self-serving, self-defending, self-aggrandizing, self-enriching and, ultimately, self-destructive. It is also destructive toward others. Selfish nature is in you and me, when we are building a home, when we are inside our homes, when we leave home. It is the foundation of our finances, our commerce, our economies, our governments, our health, our entertainments, our work and every part of our everyday lives. The human condition is built on selfish human nature.

But why shouldn’t the same human beings on the same land with the same resources experience work, commerce and life in a way that is positive, virtuous, unoppressed, sharing and inspiring rather than negative, bleak, pointless and terminal?

We should. But it requires a change in our spirit, our attitude, our motivation and the nature that human beings have had from the beginning.

It would require replacing the very foundation of society with a new one: the literal government of God on Earth.

Human government is built on human nature. God’s government is built on God’s nature. God is love (1 John 4:8). Apart from God, human beings are incapable of generating or even understanding real love. But God describes to human beings His loving nature and how to apply it. These descriptions are called laws. Like the laws of physics a builder employs to build a solid house, these spiritual laws come from the Creator, never change based on human ideas, and always produce good results.

In the government of God, the two main principles of that constitutional law are love toward God and love toward fellow man (Matthew 22:36-40). These two legal principles then subdivide into 10 fundamental laws: the Ten Commandments (Exodus 20).

Many people know about God, know about these laws and presume that they are in general compliance with most of them—or that Jesus Christ abolished them. They fail to understand that He did not abolish cause and effect, and that the effect—our crumbling world—is caused by people breaking these laws of “spiritual physics.”

But what would happen if the Creator took over all day-to-day executive, legislative, judicial, local, national and international governance and taught and enforced these laws?

People would truly obey the Ten Commandments, not only strictly by the letter but also in their spirit and intent. They would learn to willingly choose to have no other gods, including their own will, before God. They would make no idols, including money and goods. They would highly honor the very name and authority of God. They would keep the day of the week God made for worshiping Him. They would keep the first four commandments of showing love toward their Creator, along with the last six commandments of showing love toward other people. Each son and daughter would honor his or her father and mother, learning from them, living near them and caring for them. Providing financially for them would be a given. Surrounded by family and fulfilling the crucial teaching role of an elder, old age would be perhaps the best part of life! People would not kill: No fear or resources would be diverted toward preventing war, murder, harm or hatred. All spouses would devote themselves completely to their husband or wife. Among the benefits of these safe, trusting, happy marriages would be prosperity within families and in society. People raised properly would not steal. They would fear and scorn the idea of even giving the buyer, seller, worker or employer less than 100 percent. People would tell the full truth in all their transactions, eliminating the enormous economic effects of lying. People would not covet. They would be free of that enslaving mentality, free of wasted time, free of lives that go unfulfilled even when a person gets what he coveted. People would care far less about what they own and far more about who they are.

Under God’s government, the individual would pay no income tax, business tax, sales tax, property tax, health-care tax or death tax. Instead, he would pay his first tithe (10 percent of his profits) and offerings of his own determination (Deuteronomy 14:22; Exodus 23:14-16). This would produce the spiritual blessing of developing humble, loving, giving character, which would facilitate further blessings by God, the least of which would be financial abundance.

Under God’s government, the individual would pay no interest and charge no interest. This would limit much of the power money would otherwise have. People would be free of credit card debt, vehicle debt, student debt, commercial debt, mortgage debt and national debt. Yet loans would still exist. They would be interest-free; provided by family, friends and neighbors; and used for a loan’s actual purpose: to truly help someone who truly needs money and will truly do everything he can to repay (see Deuteronomy 15). Every seventh year would bring a year of release in which everyone cancels all short-term debts. Every 50th year, people would experience not a depression but a jubilee (Leviticus 25).

These foundational laws of prosperity reveal an amazing truth about the prosperous economy of God’s government: It’s not about prosperity. Proverbs 3:9-10 describe abundance that would be literally uncontainable. But for all your owning, earning, acquiring, creating, helping, beautifying and building, what would matter most to you would be family, giving, character, your relationships with others, your relationship with your Creator.

Why should this be hypothetical? It shouldn’t be—and it won’t be. This is actually a nonfiction description of the economy of the World Tomorrow!

The Bible prophesies that this will be the basic picture of life on Earth not far from now. Jesus Christ will return, He will establish His government, and His subjects will learn to keep the laws God has made in everything from land management to electromagnetism to worship. No one will be left out: Each person will have the same power of choice to receive these blessings and far more. Their selfish nature will begin changing, and scenes of sharing, giving, communing, obeying and building will be unfolding at farms, ranches, gardens, barns, stables, workshops, harbors, stores, libraries, parks and neighborhoods from mountainsides to hills to river valleys to savannas to rainforests to canyons to shorelines, every man under his vine and under his fig tree, having life, liberty and the pursuit of his incredible human potential.

The ruler of this soon-coming government said in Luke 16:10: “He that is faithful in that which is least is faithful also in much.” The “least,” in this case, will be incredible prosperity and meaningful lives. What is the “much”? Hebrews 2:8 reveals the answer: The Creator of all material things wants to build the character of human beings to the point that He can give us all material things. Scenes of obedience, family, community, productivity, generosity sacrifice, laughter, meaning, purpose and love won’t be confined to an otherworldly timber-frame residential construction site. In fact, they will not be confined to this world.

The Wonderful World Tomorrow—What It Will Be Like
You don’t have to believe it! It will happen, regardless. It is sure—the world’s only sure hope. This advance good news of tomorrow is as certain as the rising of tomorrow’s sun. Humanity won’t bring it about—it is going to be done to us. Humanity is going to be forced to be happy—to enjoy world peace—to see universal abundance and joy fill the Earth.
From The May-June 2021 Philadelphia Trumpet
View Issue FREE Subscription
Next
Previous