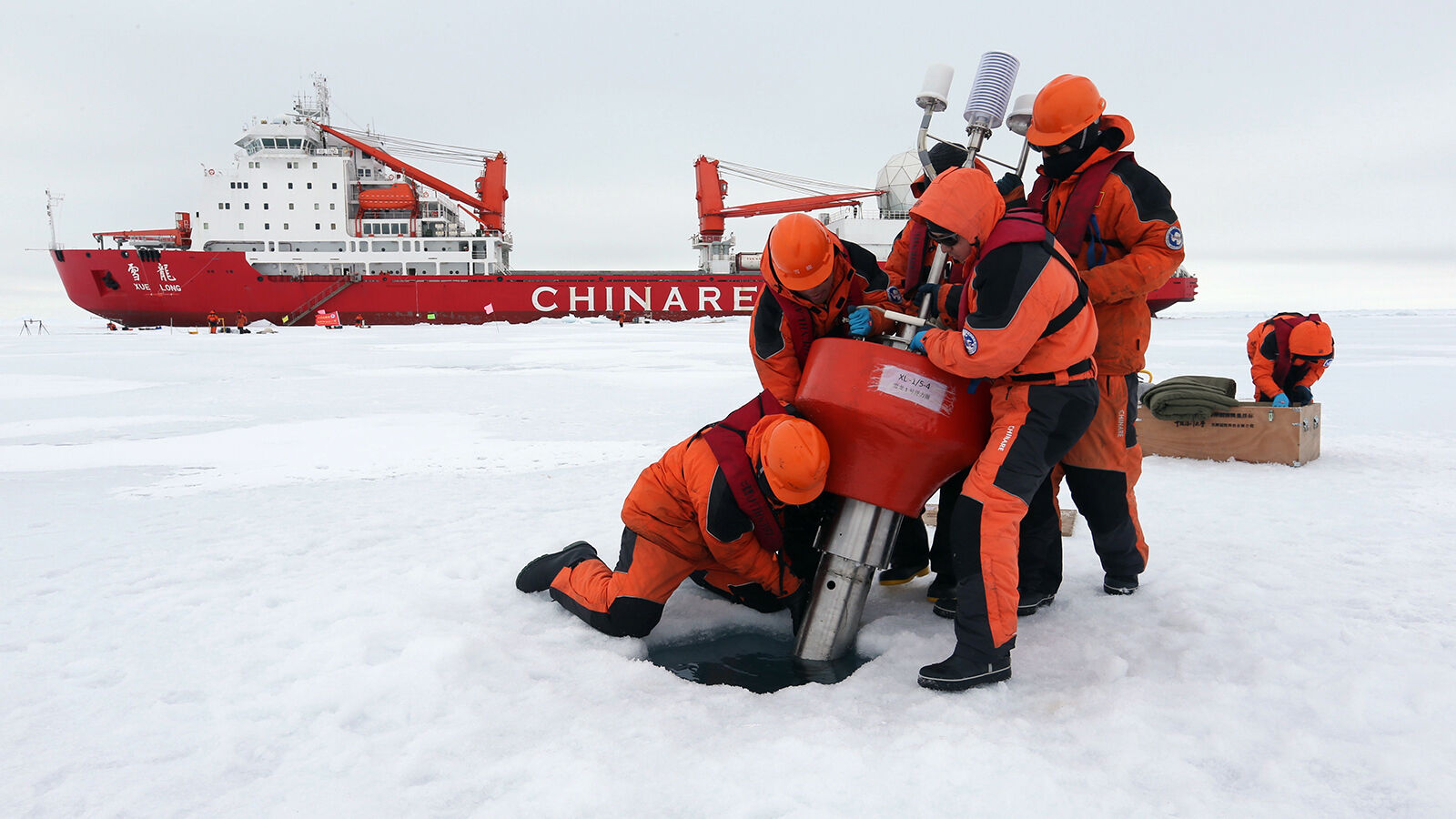 Members of a Chinese research team set up an ocean-profiling float at a short-term data acquisition location near the icebreaker Xuelong in the Arctic Ocean.
Xinhua/Wu Yue via Getty Images

The frigid Arctic has been relatively free of geopolitical struggles. But that is changing.

China will build a “Polar Silk Road” and work to develop both the Arctic and Antarctic regions, Beijing announced in a new 2021–2025 “five-year plan” published on March 5.

The Chinese will “participate in pragmatic cooperation in the North Pole,” the draft of the plan said, and improve the nation’s “ability to participate in the protection and utilization of the South Pole.”

The plan includes the development of what China calls the Transpolar Sea Route, which would pass through the center of the Arctic Ocean and stretch only a few miles south of the North Pole itself.

Historically, the frigid Arctic was relatively free of the geopolitical struggles among world powers that have beset most other regions. But in recent decades, due to thawing ice and improving technology, this has begun to change. China’s borders do not extend into the Arctic, but it obtained observer status in the Artic Council in 2013 and has become increasingly focused on the region in recent years.

In 2018, the Chinese Communist Party published a white paper outlining the nation’s Arctic policy for the first time. The document mentioned the desire to tap into lucrative resources and develop faster new shipping routes through the region.

At the time, a Polar Silk Road was viewed as a tangential add-on to the Belt and Road Initiative, whose aim is to link Asia, the Middle East, Europe and Africa on a network of road, rail and shipping passages. But now that the idea is enshrined into the 2021–2025 five-year plan, its status is considerably elevated. The plan now has a place among the major aims and aspirations in China’s Belt and Road Initiative and its general national strategy.

If the goals are realized, China will not only enrich itself by tapping into immense resource wealth at both poles, but also better connect itself to Russia and other nations.

The Trumpet carefully watches China’s expanding global reach and increasing power because the trend bears significance in light of Bible prophecy. Isaiah 23 discusses a “mart of nations” that will arise in modern times as an economic juggernaut. One of the leaders in the “mart of nations” will be a nation Isaiah refers to as Chittim, an ancient name for modern-day China. Also in a lead role will be Tyre, a city that refers to the commercial center of modern Europe.

Isaiah 23 and Ezekiel 27 show that these two powers, along with Russia, Japan and others, will together control global trade for a brief duration. Deuteronomy 28:52 makes clear that this trade partnership will operate to America’s detriment.

Trumpet editor in chief Gerald Flurry explains the details of how this economic “mart” will operate in his free booklet Isaiah’s End-Time Vision:

Instead, it is plain that Asian countries, such as China, will back the Europeans as they carry out the attack.

The significance of China’s Belt and Road Initiative—including the project’s intensifying focus on the Arctic and Antarctic regions—is revealed in these Bible prophecies.

China’s increasing power and reach shows that a time of great suffering is ahead for the United States and some of its allies. But that suffering will be immediately followed by the most peaceful and abundant age in mankind’s history. Mr. Flurry writes: “[W]hat a dynamic market of nations it is. All of them are going to besiege America, Britain and the Jewish nation. … But that trading partnership won’t last long. Soon they will clash, just before Jesus Christ returns ….”

To understand more about the rise of China and how it ties to the end of this age of man attempting to rule over himself, order your free copy of Mr. Flurry’s booklet Isaiah’s End-Time Vision.