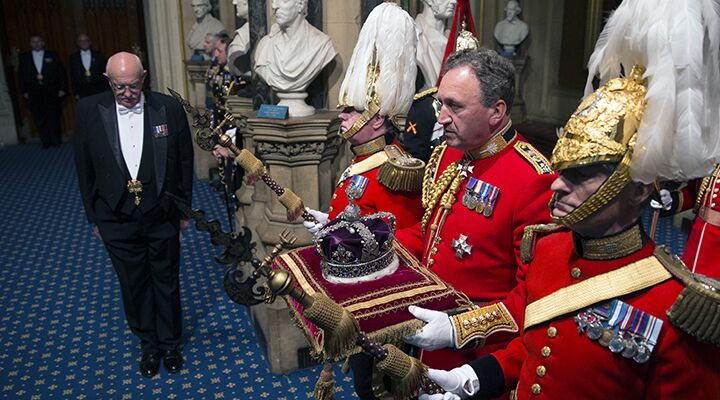 Bereft of vision, Britain is perishing.

Whatever the outcome of today’s referendum in Scotland, one lesson stands paramount: Great Britain is dead.

Even if the “No” vote prevails and Scotland and England remain united, it will be a Pyrrhic victory. Westminster will try to restore the confidence of the Scots, especially the young, but the inclination toward separation and independence is strong, and it has momentum. As they say, the die is cast.

Today’s referendum has left many of us dazed and confused. What just happened? How did we get here? What does this mean?

I think I know the answer, or at least part of it. Two weeks ago, when polls showed that the “Yes” campaign had a marginal lead, I, like many others, was shocked. Since then, the shock has morphed into fairly acute melancholy and sadness. In fact, I’ve been surprised at how personally I have taken this. The reason why is simple.

This is an assault on my identity.

Again, how did we reach this point?

Without Scotland there is no Great Britain.
The answer, at least a good part of it, turns on this question of identity.

Here in Britain (which includes Scotland, for now), it is no longer fashionable to be British. Since World War ii a multitude of factors—political correctness, revisionist historians decrying the British Empire, the onslaught of secularism, the rise of multiculturalism and tolerance—have converged to destroy the individual sense of national identity. There is no longer a defining sense of being British. At least not the British we once were.

Pretend you’re an average Briton, American, Australian or Canadian, and ask yourself: What does it mean to be British in the 21st century? Or American? Or Australian? Or Canadian? Now compare your answer to that of your great-grandfather. A century ago, he would have answered that question with vigor, sincerity and clarity. He’d have told you that being British meant being Christian, or in the very least subscribing to Christian mores and values. Being British meant possessing a clear sense of right and wrong; it meant having a morality that was a function of Britain’s Judeo-Christian heritage. Being British meant loyalty to God, King and country. Being British meant being the world’s chief proprietor of the English language, of the rule of law and democracy.

One hundred years ago, being British meant being an enthusiastic and unapologetic child of a globe-girdling empire. This empire wasn’t perfect (what human empire is?), but it was far more benevolent than others and was a force for great good and civility in the world. Scotland was an integral part of this empire, and made countless important contributions. Although it only comprised a small part of the empire, Scotland furnished some of its greatest explorers, colonialists, politicians, warriors, authors, intellectuals and inventors. During the 1750s, at least 50 percent of the East India Company—the enterprise at the foundation of the British Empire—were Scots.

This is not to say the British Commonwealth or Great Britain was culturally, politically or even religiously homogenous. Britain is comprised of different peoples, each with distinct and often clashing personalities and interests. The Scottish and English, in particular, have a long history of contention and war. But there has always been a larger sense of familial affection and loyalty. Despite the differences, the British have been one family. One hundred years ago a Scot was a Scot, but he was also happily, willingly, British. Same goes for an Englishman.

During the 1750s, at least 50 percent of the East India Company—the enterprise at the foundation of the British Empire—were Scots.
Today, that willingness to identify with being British is gone. The sense of identity no longer exists, at least not in the traditional manner. Today, depending on the age or class, being British means drinking on the weekend and worshiping football. It means using politically correct jargon instead of telling the blunt truth. It means unabashedly accepting, even adopting, foreign cultures and treating them as superior to your own. It means tolerating what was once considered evil, in the name of progressivism.

There is no longer respect and admiration for the empire and what it stood for. There is no loyalty to Judeo-Christian values. No admiration for Great Britain’s heritage, for its vital contributions to the English language and culture, or to the economies, infrastructure and legal systems of peoples and countries the world over. In contemporary Britain, there is no such thing as being British. Why?

Because select self-righteous British have systematically destroyed what it means to be British.

Melanie Phillips described it aptly: “It’s difficult to persuade people to stay part of a Britain that has fragmented its own collective identity and purpose on so many different levels.”

Contrast this with the views of Scottish National Party leader Alex Salmond and the “Yes” campaign. Mr. Salmond has captured the imagination of his followers with a clear and exciting vision of what Scottish independence will look like. His vision is more fantasy than reality. But still, hundreds of thousands of Scots are moved and excited about his description of Scotland’s identity as an independent nation.

On Monday, James Naughtie interviewed one such enthusiastic voter on the Today Program. “I think Scotland’s woke up. Something’s stirring,” he said, passion infusing every word. “This means so much,” he sighed. “All my life, you feel as though you’re stuck in this same horrible trap. See for the first time there’s a feeling, there’s something happening and its … wonderful.”

It’s difficult to persuade people to stay part of a Britain that has fragmented its own collective identity and purpose on so many different levels.
Melanie Phillips
Mr. Salmond and the “Yes” campaign have given this man a sense of what it means to be part of an independent Scotland!

Contrast that with the “No,” or Better Together campaign. No one has provided a rousing, positive vision of what it would mean to remain part of Britain. No one has reminded the Scots of their illustrious history with England. No one has reminded them of what England and Scotland have accomplished together—and provided a vision of what they could accomplish together in the future. There once was a dream called Britain. Being British meant something—changing the world, righting wrongs, civilizing distant lands. But now the world is not our problem. There are no rights and wrongs—just British neo-colonialist arrogance—and sadly, a prevailing sense of shame of its history.

When Scots ask, “Why should we be Scottish,” the Yes campaign provides an hope-filled vision of a thriving, independent Scottish state. When Scots ask, “Why should we stay with England?” Prime Minister Cameron and the “No” campaign ramble on about the economic costs, or the impact on social welfare, or how disastrous life in the EU will be. These consequences are real and relevant, of course.

But they’re not the most important reason Scotland shouldn’t become independent!

Where is the hope-filled vision of Scotland’s destiny should it remain united with England? There isn’t one. Why? Because England doesn’t know what it means to be English—and consequently, it doesn’t have a clear vision of its own destiny.

As Phillips put it: “The Scots understand what it is to be Scottish and feel good about Scottish achievements. Many in Britain no longer know what Britishness is—and if they think they do, they are told they should hate it. The Scots are proud of their past; the British are constantly apologizing for theirs.”

We are here today because the very quality—the defining sense of identity—the clear and indomitable sense of what it means to be British—that for more than 300 years has bound Scotland to England, and England to Scotland, is gone. This sense of identity had been diminished for decades, chiseled away by revisionist historians abolishing the British Empire, by multiculturalists embracing other cultures and religions, and by politically correct politics undermining patriotism and loyalty to Britain.

Really, we shouldn’t be at all surprised by what we are witnessing today in Scotland. This moment has been brewing now for decades. It’s just as King Solomon stated 3,000 years ago: “Where there is no vision, the people perish.” Today there is no vision of being British, and Britain is perishing.

I can’t speak for you, but that makes me more than just a little sad.