Most people dismiss Bible prophecy. Jesus did not. In fact, He rebuked those who didn’t fully believe it! 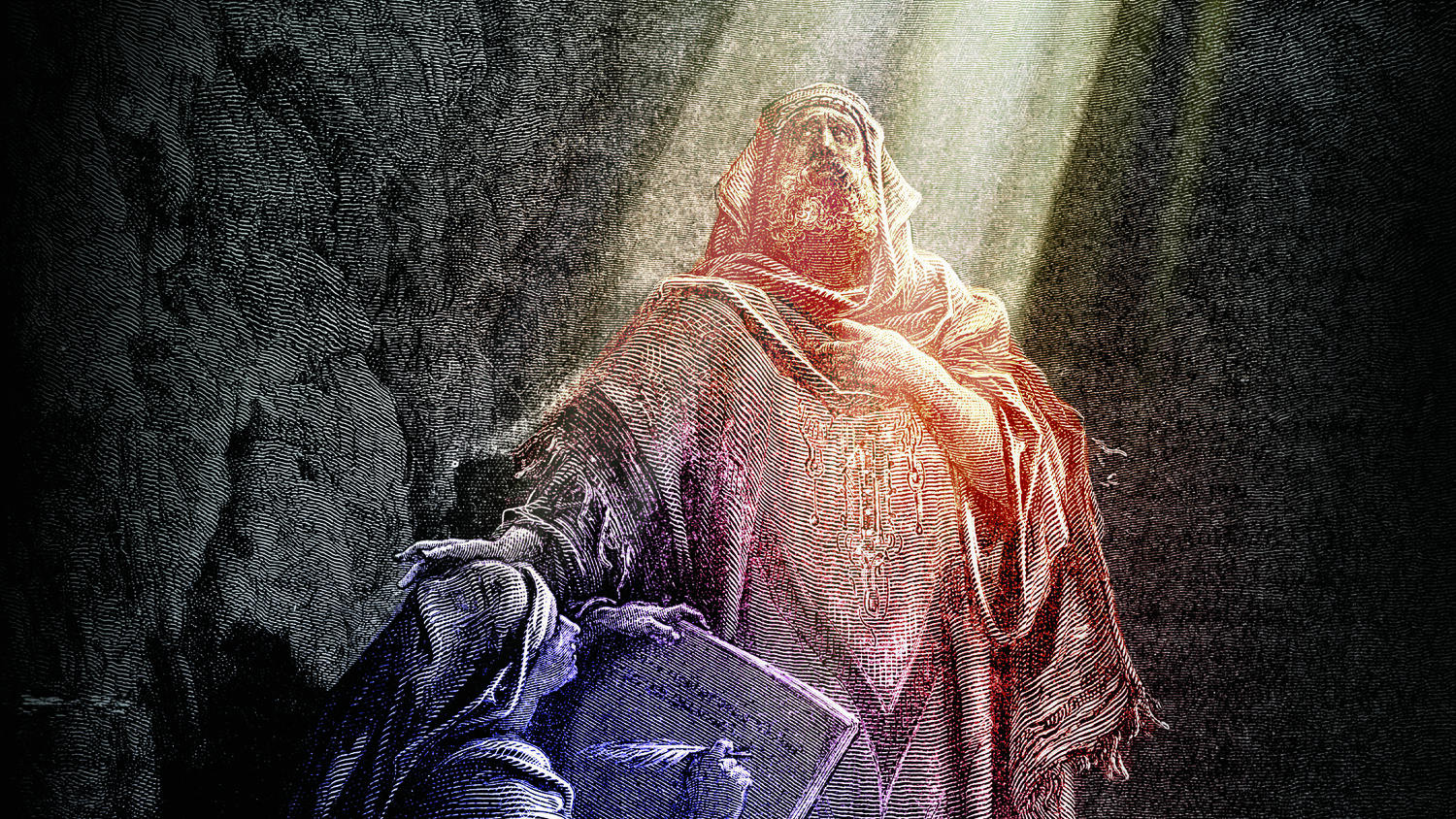 Most people dismiss Bible prophecy. Jesus did not. In fact, He rebuked those who didn’t fully believe it!

What is a true Christian? One who follows Jesus Christ. A true Christian also follows His true apostles, prophets and other leaders who look to Christ.

After Christ was crucified and risen, He appeared to a group of Jews who did not recognize Him. They were talking about the mighty words and deeds of a prophet named Jesus, who had been killed, but whose tomb was then found to be empty. They were disappointed because they had hoped that this man would rise up to save the nation of Israel. They did not understand the purpose of Christ’s first coming nor that He would not rule Israel and all other nations until His Second Coming.

Then Christ said something very important to them: “Then he said unto them, O fools, and slow of heart to believe all that the prophets have spoken” (Luke 24:25).

Do you believe all that the prophets have spoken? All of it? Christ said if we are to follow Him, if we are to be true Christians, we must do that.

Yet many Christians relegate prophecy to mere history. They disregard the prophecies of the Old Testament and of the New Testament—including prophecies Jesus Christ Himself uttered!

Those who don’t believe the Old Testament prophets, Christ calls “fools”! Christ dearly loved the people He was speaking to, but notice how severely He rebuked them!

Jesus proceeded to show that His first coming fulfilled prophecies. He had to come first to qualify to replace Satan, who currently rules the world (2 Corinthians 4:4). “Ought not Christ to have suffered these things, and to enter into his glory?” He began (Luke 24:26). He came as a human being, He suffered, and He qualified to enter into glory, ruling Earth and the universe forever! And those who follow Him today will receive magnificent rewards and tremendous glory as well.

“And beginning at Moses and all the prophets, he expounded unto them in all the scriptures the things concerning himself” (verse 27). These Jews did not know the Bible passages about the first coming of the Messiah. So Christ Himself was showing them, and in the process letting them know they had been lazy in their Bible study! Christ showed His love and kindness by teaching these people for hours, but He also communicated His frustration with them for not knowing their Bibles better (verse 29). They didn’t understand the teachings of the Old Testament prophets, or else they would have known the difference between Christ’s two prophesied appearances on Earth.

He was showing them that if they believed the prophets of the Old Testament, beginning with Moses, they would know that the Messiah, the Christ, would have two appearances.

Here is a clear prophecy Moses recorded in Genesis 49:1: “And Jacob called unto his sons, and said, Gather yourselves together, that I may tell you that which shall befall you in the last days.” This prophecy, and about 90 percent of all Bible prophecy, is recorded for fulfillment in the last days! Prophecies like these are more relevant than ever!

Moses was a great prophet—one of the greatest! Do you believe what he wrote about Adam and Eve? Did God create them, or did human beings evolve from animals? What Moses wrote is absolutely true! What about his writings about the two trees—is that just fantasy? It is true, and deeply relevant: The problem with the world today is that people are eating from the wrong tree, spiritually—the tree of death! They could have happiness and joy and peace if they would eat from the tree of life that Moses wrote about.

Do you believe Moses and all that the prophets have spoken? You have to, if you’re going to follow Christ. Christ certainly believed it. In fact, God created Adam and Eve through Him.

Following the first five books of the Bible, written by Moses, a prophet, is the section of the Bible called the former prophets. This consists of Joshua, Judges, Samuel and Kings. How many people actually believe these former prophets contain prophecy? The Ferrar Fenton translation says the books in the former prophets are “the history of Israel.” No—it’s actually history and prophecy—mainly prophecy! It is history that becomes prophecy—history that was arranged and inspired by God Himself to explain what He is doing on Earth! People who think like these scholars are “slow of heart to believe all that the prophets have spoken”!

Another big section of the Bible, specifically called “the Prophets,” contains longer books like Isaiah, Jeremiah and Ezekiel, followed by the 12 shorter books of the minor prophets. These Old Testament books are filled with prophecy! And even beyond the former prophets, major prophets and minor prophets, there are still more prophecies in the Old Testament.

For the End Time

The book of Daniel is a crucial book of prophecy, and it is written only for this end time (Daniel 12:4, 9). This message was “closed up and sealed till the time of the end.” What this prophet spoke was not for himself, not for his people, not for some time in the past. It is something God revealed to him for us to believe. Will we be slow of heart to believe it?

What did God reveal to Daniel about people in the end time? “We have sinned, and have committed iniquity, and have done wickedly, and have rebelled, even by departing from thy precepts and from thy judgments: Neither have we hearkened unto thy servants the prophets …” (Daniel 9:5-6). This agreed with what Christ later said: Not hearkening to God’s servants the prophets is a terrible mistake!

“Yea, all Israel have transgressed thy law, even by departing, that they might not obey thy voice; therefore the curse is poured upon us, and the oath that is written in the law of Moses the servant of God, because we have sinned against him” (verse 11). Daniel called ignoring the message of Moses a sin.

Another clear reference showing that prophecy is for right now is found in the minor prophets in the book of Habakkuk. It states, “[A]t the end it shall speak …” (Habakkuk 2:3). It’s not going to speak in the Middle Ages, but “at the end”—the time we are in right now. Many people think it’s all history. They are wrong. Ninety percent of the Bible’s prophecies are for the end time. Sometimes, prophecy is dual, meaning that it was fulfilled in the past and will be fulfilled again “in the last days,” or “at the end.” Bible history repeats itself. And God intends it to show us what is about to happen in our day.

We need to understand prophecy!

Here is one of many examples of this: “Beware therefore, lest that come upon you, which is spoken of in the prophets; Behold, ye despisers, and wonder, and perish: for I work a work in your days, a work which ye shall in no wise believe, though a man declare it unto you” (Acts 13:40-41). This is quoted from Habakkuk 1:5. God says that if we obey Him and listen to His prophets, He will fill our lives with wonder! Most people “in no wise believe,” but God speaks through a man in this end time. You must be able to recognize through whom God is speaking. See and believe God, and you will be ecstatic at how your life turns out.

The New Testament begins with a major prophecy: “And the angel said unto her, Fear not, Mary: for thou hast found favour with God. And, behold, thou shalt conceive in thy womb, and bring forth a son, and shalt call his name Jesus. He shall be great, and shall be called the Son of the Highest: and the Lord God shall give unto him the throne of his father David: And he shall reign over the house of Jacob for ever; and of his kingdom there shall be no end” (Luke 1:30-33). This is a prophecy and a clear signal from God to focus on the Son of the Highest, and on “the throne of his father David.” That throne started with David, and God is going to give it to Christ, who will come to Earth to govern from it!

Now notice this passage, also from the New Testament: “And after they had held their peace, James answered, saying, Men and brethren, hearken unto me: Simeon hath declared how God at the first did visit the Gentiles, to take out of them a people for his name. And to this agree the words of the prophets; as it is written, After this I will return, and will build again the tabernacle of David, which is fallen down; and I will build again the ruins thereof, and I will set it up” (Acts 15:13-16). This is another Old Testament quote—Amos 9:11.

That verse reads, “In that day will I raise up the tabernacle of David that is fallen, and close up the breaches thereof; and I will raise up his ruins, and I will build it as in the days of old.” God uses this prophecy to communicate what has happened in God’s true Church. What God had built in that Church fell several decades ago. Someone had to raise it back up before Christ’s return. This too is about the throne of David. That throne is still on Earth today—Christ won’t return to a nonexistent throne! Do you know where it is? This is a critical question we need to answer! (Request a free copy of The New Throne of David to learn more.)

Christ is coming! God will give Him the throne of David. What inspiring truth and prophecy! Prophecy is about individuals and nations, but it is also about the glorious plan God is working out!

Live by Every Word

God wants us to live by every word of all these prophets. This will fill our lives with glory, wonder, majesty and royalty! God’s Word is about to flood the Earth (Isaiah 11:9), but we can soak it up right now! This world is suffering for not paying attention to the prophets of God. Soon, God will raise the ruins of the world just as He has in His Church.

To ignore prophecy is to ignore God communicating to us!

God the Father is perfect. Jesus Christ is perfect. The Bible is Jesus Christ in print. Remember this when you study the Bible. Imperfect translators made some mistakes, but this doesn’t nullify the messages of any of the biblical books.

We are right at the edge of Christ’s Second Coming—a time when all people will finally choose the right tree that Moses wrote about. Christ will fill the Earth with wonders that will set our imaginations on fire!

These prophecies are leading toward glory for true Christians, for Judah, for all Israel, for the whole world. They are about God building His character in His people as a house “fitly framed together.” The Old Testament prophets are the foundation of God’s Church (Ephesians 2:19-21). We must grasp this or else our spiritual house will fall.

God’s reward is supreme glory. Christ has invited all who will follow Him prior to His Second Coming to proclaim His message to the world to rule with Him for eternity! What a reward!

The New Throne of David
A dramatic change in how God is handling this throne shows how soon Jesus Christ Himself will be sitting on it!
From The April 2021 Philadelphia Trumpet
View Issue FREE Subscription
Next
Previous