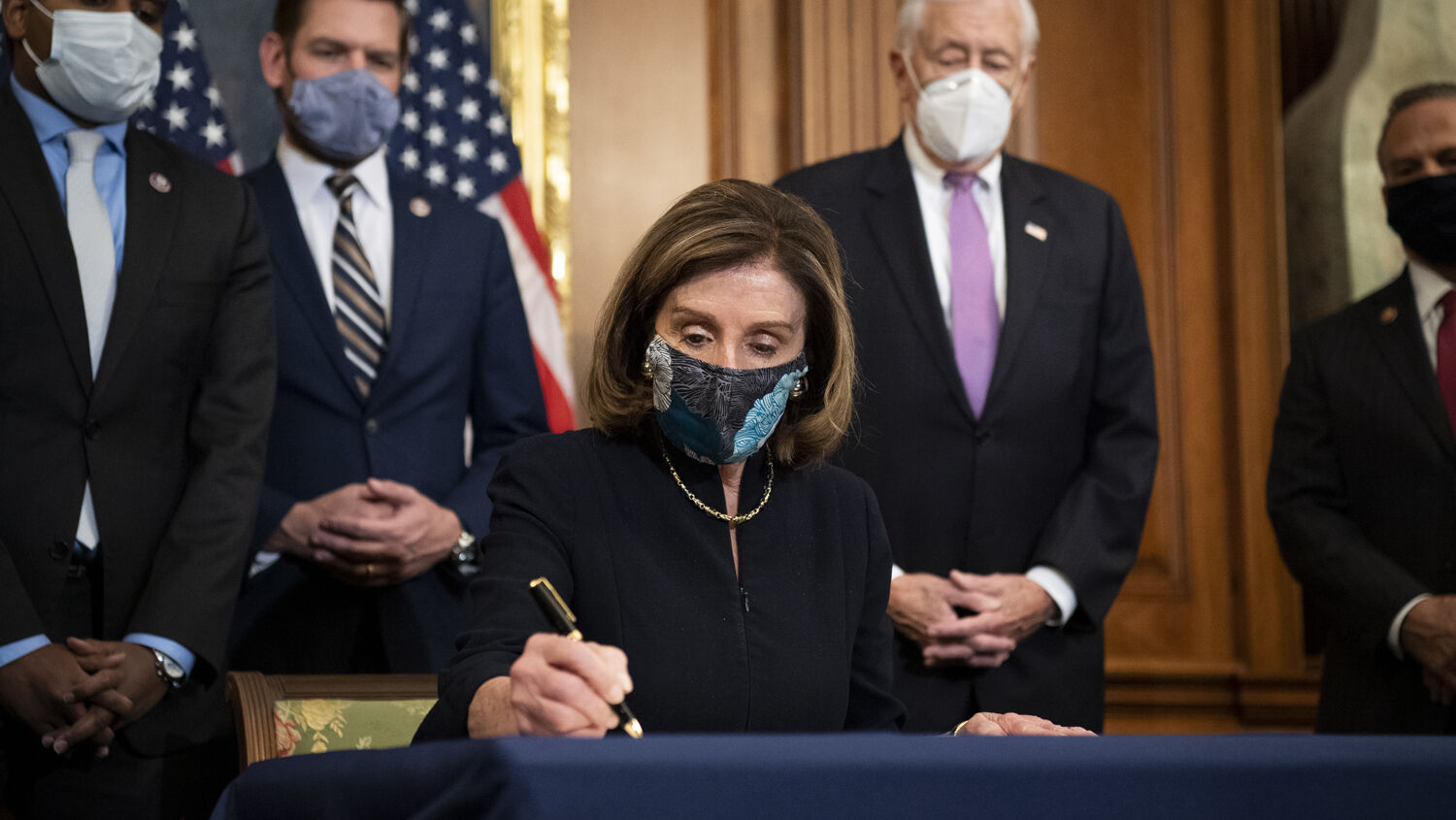 Speaker of the House Nancy Pelosi, D-Calif., signs an Article of Impeachment during an engrossment ceremony in the Capitol in Washington on Wednesday, Jan. 13, 2021.
Caroline Brehman/CQ-Roll Call, Inc via Getty Images

‘The law is slacked, and judgment doth never go forth.’

United States House Speaker Nancy Pelosi shocked a lot of people when she named Rep. Eric Swalwell as an impeachment manager in the lead up to today’s vote to impeach U.S. President Donald Trump. An impeachment manager is supposed to reinforce the credibility and integrity of the case against a president. But Swalwell’s reputation has been seriously tarnished by his role in the Russiagate conspiracy alleging that President Trump conspired with the Kremlin to steal the 2016 presidential election. And he continues to face calls for his removal from the House Intelligence Committee due to his past relationship with the Chinese spy Fang Fang. So is Swalwell really one of the nine most qualified people in the House of Representatives to manage impeachment proceedings?

The impeachment articles introduced to Congress on Monday charge President Trump with “Incitement of Insurrection.” They expressly allege that he is guilty of “willfully inciting violence against the government of the United States” by calling on his supporters to decry election rigging in Washington, D.C., last week. Yet even the liberal law professor Jonathan Turley has noted that President Trump “never actually called for violence or a riot.” Instead, he expressly told his supporters “to peacefully and patriotically make your voices heard.” So, 222 Democrats and 10 Republicans have impeached the president for a crime he did not commit.

In 2018, Pelosi told reporters that she is confused why Americans are not uprising against the Trump administration over conditions on the Mexico border: “I just don’t even know why there aren’t uprisings all over the country, and maybe there will be when people realize that this is a policy that they defend.” That rhetoric is far more of a call to insurrection than anything President Trump said about election rigging.

And Speaker Pelosi is not the only Democrat who has called on Americans to take to the streets in protest!

Rep. Maxine Waters called on supporters to confront and harass members of the Trump administration over conditions on the Mexico border. “[I]f you see anybody from that Cabinet in a restaurant, in a department store, at a gasoline station, you get out and you create a crowd,” she said in 2018. “And you push back on them. And you tell them they’re not welcome anymore, anywhere.” That is not “peacefully and patriotically” making your voice heard. It is a call for literal rebellion against the government. And now Waters has voted to impeach President Trump for “willfully inciting violence against the government of the United States.”

The District of Columbia Attorney General Karl Racine is even looking into the possibility of arresting Donald Trump, Donald Trump Jr., Rudy Giuliani and U.S. Rep. Mo Brooks with inciting violence at the U.S. Capitol.

How biased and corrupt does law enforcement have to be to consider arresting the president while letting Pelosi and Waters walk free? Former federal prosecutor Sidney Powell has written a book titled Licensed to Lie: Exposing Corruption in the Department of Justice, exposing “the strong-arm, illegal, and unethical tactics used by headline-grabbing federal prosecutors in their narcissistic pursuit of power.” And the corruption in our justice system goes deeper than the House Intelligence Committee and the Justice Department.

There is an abundance of evidence that the 2020 presidential election was stolen via digital election rigging and fraudulent ballots, but America’s court system refuses to hear the evidence. All together, over 60 lawsuits were thrown out of the court after being dismissed as “frivolous” and “without merit.” Even the U.S. Supreme Court refused to hear the Texas v. Pennsylvania et al case that exposed how four attorneys general unilaterally changed their states elections laws last minute to flood cities with unverified mail-in ballots. If the judges overseeing these cases did not believe there was enough fraud to overturn the election, you would still think they would want to examine the fraud there was so these problems do not come up again in the future.

But apparently, these judges are more worried about political expedience than actual justice!

“The corruption of the justice system is increasing at an alarming rate,” wrote John Dietrich for American Thinker. “Every system has examples of corruption. There is a point where the level of corruption indicates that the entire system is corrupt. In a corrupt system, the innocent are routinely punished, and the guilty often go unscathed. There are disturbing indications that we are approaching a largely corrupt judicial system.”

Dietrich then cites an extreme case from this summer, when St. Louis Circuit Attorney Kim Gardner released all the rioters and looters arrested during a Black Lives Matter protest, but prosecuted the McCloskey family for defending their home from a potentially dangerous mob. In an interview with Fox News’s Tucker Carlson, Mark McCloskey said, “It’s a totally upside-down world, Tucker. … The prosecutor has apparently decided that her job as a prosecutor isn’t to keep us safe from criminals but to keep the criminals safe from us.”

McCloskey is right: We live in an upside-down world. Yet the Bible actually predicted this perversion of justice.

“America’s election crisis is teaching us a lot,” Trumpet editor in chief Gerald Flurry wrote four weeks after the 2020 presidential election. “One crucial lesson it shows is just how corrupt America’s courts are. The Trump administration is filing dozens of lawsuits alleging fraud in several states, so the courts are ruling on the legitimacy of the election. Almost all these suits are being thrown out. Media sources are accepting this at face value as proof that the claims of fraud are baseless. I am convinced that, in many cases, the rulings tell us less about the validity of the allegations than about the lawlessness of the courts!”

Later in this article, Mr. Flurry points to some amazingly specific and condemning prophecies in the book of Micah about our courts. In Micah 3:2-3, it says, “Who hate the good, and love the evil; who pluck off their skin from off them, and their flesh from off their bones; Who also eat the flesh of my people, and flay their skin from off them; and they break their bones, and chop them in pieces, as for the pot, and as flesh within the caldron” (Micah 3:2-3). God is speaking figuratively about our justice system here. It rips off people’s skins, breaks their bones, tears off the flesh, chops them into pieces, throws them into the pot and then eats them!

That may be the grisliest metaphor in the Bible, but its God’s evaluation of our justice system!

Another end-time prophecy recorded by the Prophet Habakkuk says, “The burden which Habakkuk the prophet did see. O Lord, how long shall I cry, and thou wilt not hear! even cry out unto thee of violence, and thou wilt not save! Why dost thou shew me iniquity, and cause me to behold grievance? for spoiling and violence are before me: and there are that raise up strife and contention. Therefore the law is slacked, and judgment doth never go forth: for the wicked doth compass about the righteous; therefore wrong judgment proceedeth. Behold ye among the heathen, and regard, and wonder marvelously: for I will work a work in your days which ye will not believe, though it be told you” (Habakkuk 1:1-5).

This passage says that “the law is slacked, and judgment doth never go forth.” Mr. Flurry explains in his Habakkuk booklet that this is primarily a prophecy about the Philadelphia Church of God’s six-year court battle with the Worldwide Church of God for the right to print Herbert W. Armstrong’s last and greatest work, Mystery of the Ages. Wrong judgments proceeded from the American judicial system as wicked people did everything in their power to keep this book out of print. Then God had to intervene at the last minute and perform a mighty miracle for us to get the copyright to this book. (Request a free copy of Raising the Ruins, by executive editor Stephen Flurry, for the full story behind this dramatic court case.)

Habakkuk’s point about the law being slacked and judgment never going forth can easily read as a condemnation of the court system in end-time Israel (America and Britain, primarily). The House Intelligence Committee, the Justice Department, and the judicial system are treating Mr. Trump like the Worldwide Church of God treated the Philadelphia Church of God in the battle over Mystery of the Ages. God is going to have to perform a miracle that “ye will not believe, though it be told you,” if Mr. Trump is going to remain president (please read “Why Donald Trump Will Remain America’s President,” by Mr. Gerald Flurry, if you have not already).

This world will never experience true justice until Jesus Christ’s return, but there will have to be a temporary resurgence in justice if God’s warning message is to go out to the world one last time!

For a more detailed look at the Bible’s prophecies about perverted judgment and judicial corruption in end-time America, please read “The Bible Reveals America’s Courts Are Corrupt,” by editor in chief Gerald Flurry.