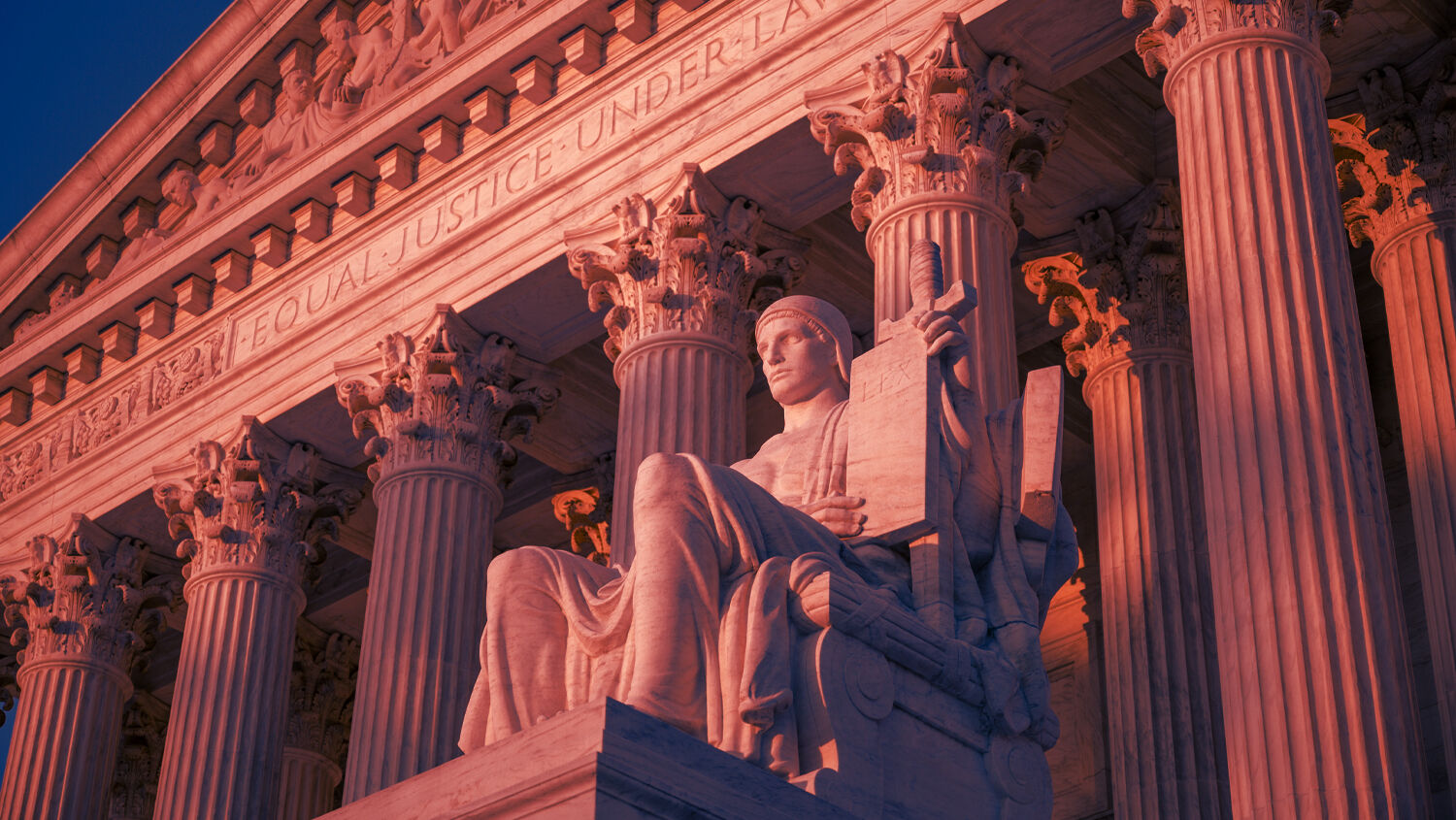 America’s election crisis is teaching us a lot. One crucial lesson it shows is just how corrupt America’s courts are.

The Trump administration is filing dozens of lawsuits alleging fraud in several states, so the courts are ruling on the legitimacy of the election. Almost all these suits are being thrown out. Media sources are accepting this at face value as proof that the claims of fraud are baseless. I am convinced that, in many cases, the rulings tell us less about the validity of the allegations than about the lawlessness of the courts!

Is justice really being served?

It looks like little if anything will be resolved before some of these issues come before the Supreme Court. As I wrote in my latest Trumpet cover article, “I would think the Supreme Court is going to have to rule on this election eventually. The fact that Justice [Amy Coney] Barrett will be there when that happens increases the odds that the law will be upheld! And that would make all the difference for the president. I would think that is the way God is going to solve this, but He may have other ideas.”

Still, before it reaches that level, a whole lot of corruption in the court system is being exposed. And if it weren’t for the recent change from Ginsberg to Barrett, even the Supreme Court would not stop the corruption! America’s courts would have stood by and allowed the election to have been stolen!

With U.S. courts on center stage, we need to understand what the Bible says about them. These courts are determining the future of the nation and your life!

The book of Micah has some amazingly specific and condemning prophecies about our courts.

Micah the prophet wrote shortly before the kingdom of Israel went into captivity. He had a message for a nation on the brink of destruction. It’s a message God wants our nations to hear today. And part of Micah’s message was all about justice.

“And I said, Hear, I pray you, O heads of Jacob, and ye princes of the house of Israel; Is it not for you to know judgment?” (Micah 3:1). Who are Jacob and Israel in this end time? We have proved for over 60 years that, in these prophecies, Israel refers primarily to America, Britain and the State of Israel (request our free book The United States and Britain in Prophecy).

God is addressing the heads of Israel—the rulers, magistrates and government officials responsible for upholding the law. Their responsibility is to give us justice based on law. They of all people ought to understand judgment.

God is talking about court systems here. Gesenius’ Hebrew-Chaldee Lexicon defines judgment as the sentence of a judgment, according to law. Judges are supposed to interpret and enforce law. Other translations use justice instead of judgment.

The only perfect law is God’s. The framers of America’s Constitution founded much of that document on God’s law as they understood it.

The word judgment means the entire process or whole administration of justice. The Hebrew word is mishpat. The same word is used as lawful (Ezekiel 18:5, 21, 27). The point is, proper judgment must always include law. This is why it is so crucial that judges not change the righteous law or reject it. God holds judges and rulers accountable for their judgment against every institution and each individual.

Just how bad is our justice system today?

“Who hate the good, and love the evil; who pluck off their skin from off them, and their flesh from off their bones; Who also eat the flesh of my people, and flay their skin from off them; and they break their bones, and chop them in pieces, as for the pot, and as flesh within the caldron” (Micah 3:2-3). God is speaking figuratively and spiritually. Our justice system rips off people’s skins, breaks their bones, tears off the flesh, chops them into pieces, throws them into the pot and then eats them!

This is probably the grisliest metaphor in the Bible. It’s as if they butcher their victims and devour them like wild beasts. Cannibalism!

This is God’s evaluation of our justice system!

But this is not the end of it. “Then shall they cry unto the Lord, but he will not hear them: he will even hide his face from them at that time, as they have behaved themselves ill in their doings” (verse 4). The heads, including the judges, ignored the cry of their victims. Soon God will turn from their cries for help in the Great Tribulation. And that includes everybody who operates in that same evil spirit. They will literally be mutilated, just as they figuratively mutilated their victims.

God’s message is about judgment—God’s system of justice. He is speaking to the heads—to politicians, lawyers, judges, educators, media and religion. They must hear God’s judgment—which, again, refers to that which is just, lawful, or according to law. In this case, God’s law. They must change, or our national house will not stand!

That is our system of justice. And God says His messenger is to tell the rulers directly—“hear this”!

All of our people must hear God’s rebuke about justice, or they will suffer more than any nation ever has. Do you “hear this”?

“The heads thereof judge for reward, and the priests thereof teach for hire, and the prophets thereof divine for money: yet will they lean upon the Lord, and say, Is not the Lord among us? none evil can come upon us” (verse 11). The religious and secular leaders judge for “reward.” Their judgments are not motivated by love for the law, the Constitution or justice. They do it for personal gain.

This illustrates how urgently we need new leaders. But the good news is, this very chaos we are now experiencing will lead directly into a world of God-fearing leaders who uphold the rule of law and make just judgments. These leaders are now being prepared—as they have been throughout history.

“That they may do evil with both hands earnestly, the prince asketh, and the judge asketh for a reward; and the great man, he uttereth his mischievous desire: so they wrap it up” (Micah 7:3). The prince (politician) and the judge ask for reward. They take the initiative in seeking their reward. How abominable! These leaders render injustice if they can’t get what they want. Their motives are very impure. “They wrap it up” means they conspire to subvert justice! They weave crooked paths and catch people as a spider catches flies in its web.

So many court judgments now revolve around judges trying twist the law to fit a predefined political objective. Laws are to be written by our legislative branch. The job of judges and justices is to interpret the law—or better, to let the law interpret itself. They have no authority to rewrite the law. If they rewrite the law, it’s almost impossible to correct the error.

In our history, there was a judge who wanted slavery. He kept searching the Constitution to support his belief. He found the phrase “substantive due process,” and he twisted these words to show that slavery was constitutional.

It took a civil war to overturn that decision. That gives you some idea of how hard it is to change what judges do!

If the judges are not subject to constitutional law, they are subject to nothing and nobody!

Law schools routinely teach about being “legal realists.” Like former Vice President Al Gore, they want an “evolving Constitution.” But this reasoning gives the judges despotic powers. It also takes us away from the foundational law established by our forefathers.

Then why do our politicians allow it? The president and Congress often like judges to do this if the decisions are favorable to their views and they know voters will not approve. Still, the judges are taking power from the legislature and the executive branches as they rewrite the Constitution.

Our politicians simply lack the vision to see how disastrous this process is. It is based on selfish lawlessness—not law!

These judges are exercising power like dictators and destroying the democratic process. That means we cannot maintain the rule of law. Our future is very black indeed unless we make far-reaching changes.

We’ve had our own experiences with unjust court systems. The state of California attacked the church headed by Herbert W. Armstrong in 1979. Lawyers and judges met privately to discuss their attack. It was an unethical meeting. God’s Church was described as “a bowl of spiders.” Eventually, the Church was cleared of all wrongdoing. But there were no apologies.

So who was the “bowl of spiders”?

We lived through that abominable miscarriage of justice!

The whole system of justice is being contaminated more each day. This leads to people disrespecting these institutions.

Why can’t we see what we are doing to ourselves?

As I wrote in that cover story, God is going to step in to ensure that America’s election is not stolen. But even that will prove to be only a temporary solution to this problem of injustice.

What is the permanent solution? God gives us that solution in Micah.

“He hath shewed thee, O man, what is good; and what doth the Lord require of thee, but to do justly, and to love mercy, and to walk humbly with thy God?” (Micah 6:8). The first condition God requires is “to do justly”—to give justice, based on God’s law of love, to everyone. Each one of us is going to be ruled by God’s law, or we have no future.

But this is not a hard, calculating justice. Secondly, we must “love mercy.”

Thirdly, we are “to walk humbly with thy God.”

“O man” is from the word Adam. Adam was made from the dust of the ground. We too are like Adam—a pile of dust.

Why shouldn’t we walk humbly with our God? Why are men, made from mud, so proud and vain?

God has shown you, O man. Since the time of Adam, God has shown man His truth. Apostles and prophets have been slaughtered for delivering God’s precious truth. Man has had ample opportunity and has failed utterly. Now Jesus Christ is about to intervene and bring us His glorious justice.

Neither Donald Trump nor the conservatives on the Supreme Court nor any other human being will take these steps to restore justice. But God says He will—and in a very short time.

His indictment against the judges in Micah 7 continues: “The best of them is as a brier: the most upright is sharper than a thorn hedge: the day of thy watchmen and thy visitation cometh; now shall be their perplexity” (verse 4). In the midst of these briers and thorn hedges are God’s end-time “watchmen.” God has used two men to watch and warn in this end time: Herbert W. Armstrong warned for 57 years about the terrible fate that awaits America if we don’t repent, and since Mr. Armstrong’s death, God has used a type of Micah to carry on that same warning.

These men watch and warn just before “thy visitation”—speaking of the Second Coming of Jesus Christ! The watchman work is directly tied to Christ’s return. One leads directly to the other. All this bad news is directly connected to this glorious news: This is all a sign that Christ is about to visit this Earth and give us true justice!

Do you believe Christ? How many people really believe God’s message?

What wonderful and inspiring news! This is the best news you could ever hear!