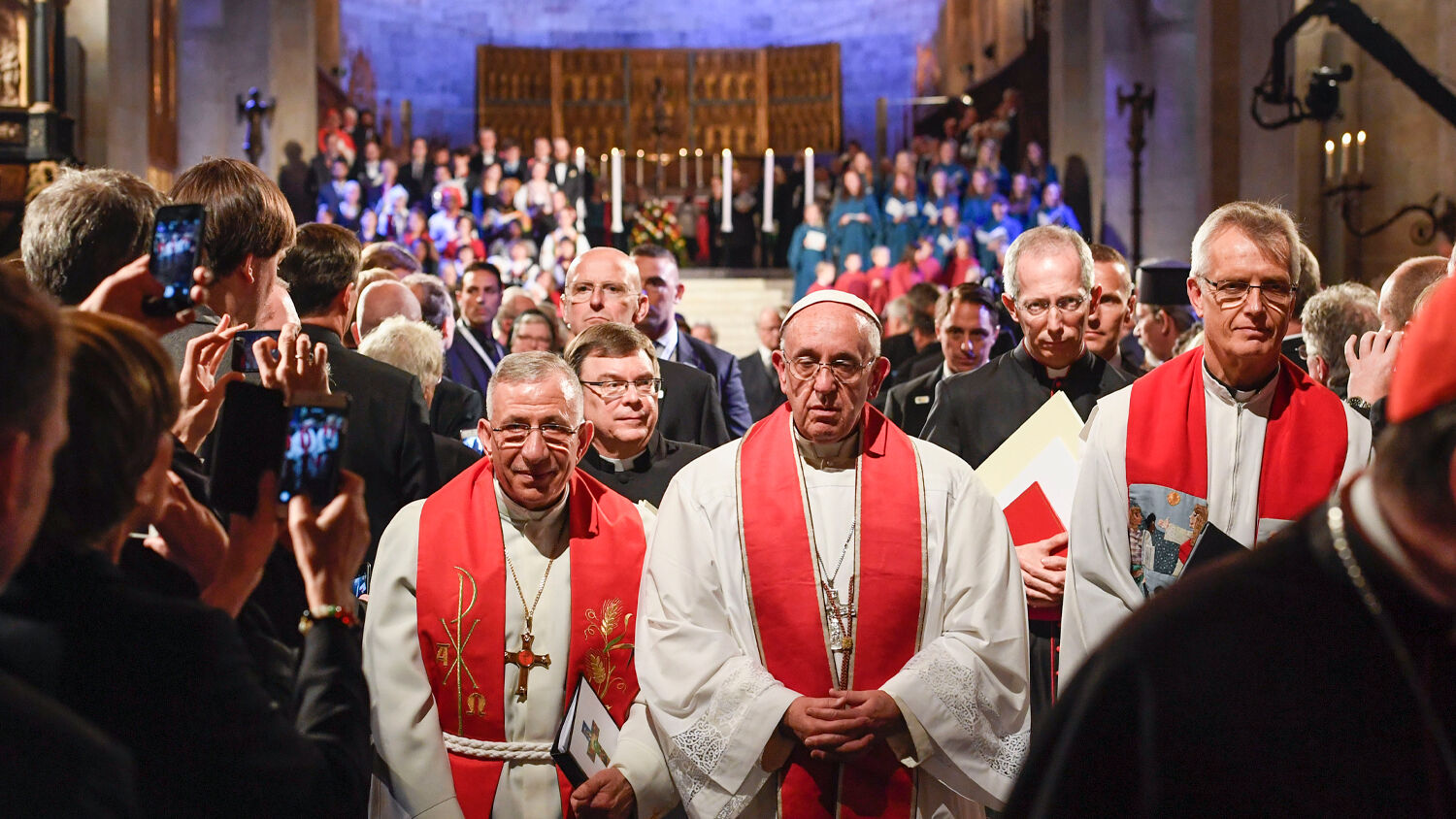 Pope Francis (C) flanked by Arch bishop Munib A Younan (L) and Martin Junge of the Lutheran world federation after an ecumenical prayer at the Lund Cathedral on October 31, 2016 in Lund, Sweden.
JONAS EKSTROMER/AFP/Getty Images

The 500th anniversary of the Protestant Reformation brings Catholics and Lutherans closer than ever.

Catholics and Lutheran Protestants made significant steps toward reconciliation this month. On January 3, the 500th anniversary of Martin Luther’s excommunication, the Vatican and the Lutheran World Federation uploaded an updated translation of an agreement signed between them over 20 years ago.

The agreement, the Joint Declaration on the Doctrine of Justification, healed one of the biggest rifts between Catholicism and Lutheranism. Historically, Catholics believed that works—in the form of rituals like penance and confession—were what gave people salvation. Luther believed that it is through grace alone apart from works that men were saved. Luther’s views morphed into a movement worshipping separately from Rome.

The declaration states that both churches agree salvation is through grace rather than works. It was basically the two organizations stating they’ve reconciled their differences.

“There was this agreement between the Catholic Church and the Lutheran World Federation that we do have the same doctrine,” says Bishop Brian Farrell, secretary for the Pontifical Council for Promoting Christian Unity. “[I]t basically says this: Together, we Lutherans and Catholics, confess that by grace alone … we are accepted by God … So, we reached an agreement on something that was fundamental, something that caused the rift and the separation and so much conflict down the centuries.”

The updated document is an official translation of it into Italian. The original was written in English and German. Farrell said English and German were “the official texts because many of the people in the dialogue that led to [the declaration] were naturally German Lutherans or Swedish or Finnish Lutherans and they spoke German.” Apparently, the unofficial Italian translation differed from the proper text.

The new translation seems to be more on the Catholic side of the argument. The date of the translation’s release may be a signal that Luther’s “time in purgatory” is almost up.

“We are on the road away from conflict towards communion,” said Farrell. “And that communion grows as we reach new understanding and new agreements between us. So yes, we are in a very different place.”

But there is another, more important Reformation anniversary coming up.

January 28 will be the anniversary of the start of the 1521 Diet of Worms. The several-months-long conference in Worms, Germany, was headed by Holy Roman Emperor Charles v to hear out Luther’s reasoning. Charles was ruler of both Germany and Spain—and a lot in between. He was the most powerful man in Europe at the time. He rejected Luther’s arguments and branded him a criminal in the Holy Roman Empire. The diet is seen as the event that caused the Catholic-Lutheran schism.

It goes without saying that Catholics and Protestants didn’t get along well after this. Luther was already excommunicated (condemned to hell) by Rome. Lutherans in turn labelled the pope the antichrist.

But a religious dialogue group is hoping to change that.

Last year, the Altenberg Ecumenical Roundtable, called for the Vatican to revoke its excommunication and for the Lutheran World Federation to revoke labelling the pope as antichrist. “The time for this is ripe,” read the statement.

Many Lutheran preachers see the controversy of the Diet of Worms as being mostly fixed. “[The Diet of Worms is] of great relevance to church history and the history of the Reformation,” said theologian Theis Gundlach. With regard to modern ecumenism [reunion between the denominations], we are grateful that the disputes of the past have been overcome.”

“Without eliminating the issues of the excommunication and the designation as antichrist, a closer community between the Evangelical and Catholic churches is unthinkable,” said Lutheran priest Hans-Georg Link. “The year 2021, 500 years after the schism, would be a good juncture for officials on both sides to draw a line under the dispute.”

Both prominent Catholics and Lutherans are calling for the reunion during the schism’s 500th anniversary.

Another prominent theologian predicted the reunion between the papacy and Lutheranism. “The pope will step in as the supreme unifying authority—the only one that can finally unite the differing nations of Europe,” wrote Herbert W. Armstrong in the Plain Truth magazine. “The iron jurisdiction over both schools and religion will be turned over to the Roman Catholic Church. Europe will go Roman Catholic! Protestantism will be absorbed into the ‘mother’ church—and totally abolished.“

The final—albeit short-lived—triumph of Catholicism is recorded in literally dozens of Bible prophecies. Right now—whether we want to believe it or not—the stage is being set for the greatest revolution in religion the world has witnessed. … The mighty problem of achieving unity is twofold. First, it involves reconciliation of the Orthodox Schism that officially commenced in 1054 and divided the churches in the East …. Second, it involves restoration to the Roman Communion all Protestantism which developed from 1517 onward.

Mr. Armstrong wrote both statements roughly half a century ago.

And we see today the Lutheran churches one step closer to communion with Rome. The Eastern Orthodox Church is on a similar path.

How could he have known so long ago?

Because of Bible prophecy.

Please request our free booklet He Was Right, to learn more about Mr. Armstrong’s many predictions and how they’re coming to pass now. The chapter “Returning to the Fold” is especially relevant to the reunion of the Catholic and Protestant churches. Also request our free booklet Who or What Is the Prophetic Beast? to learn more about the woman in Revelation 17 and what she means for you today.