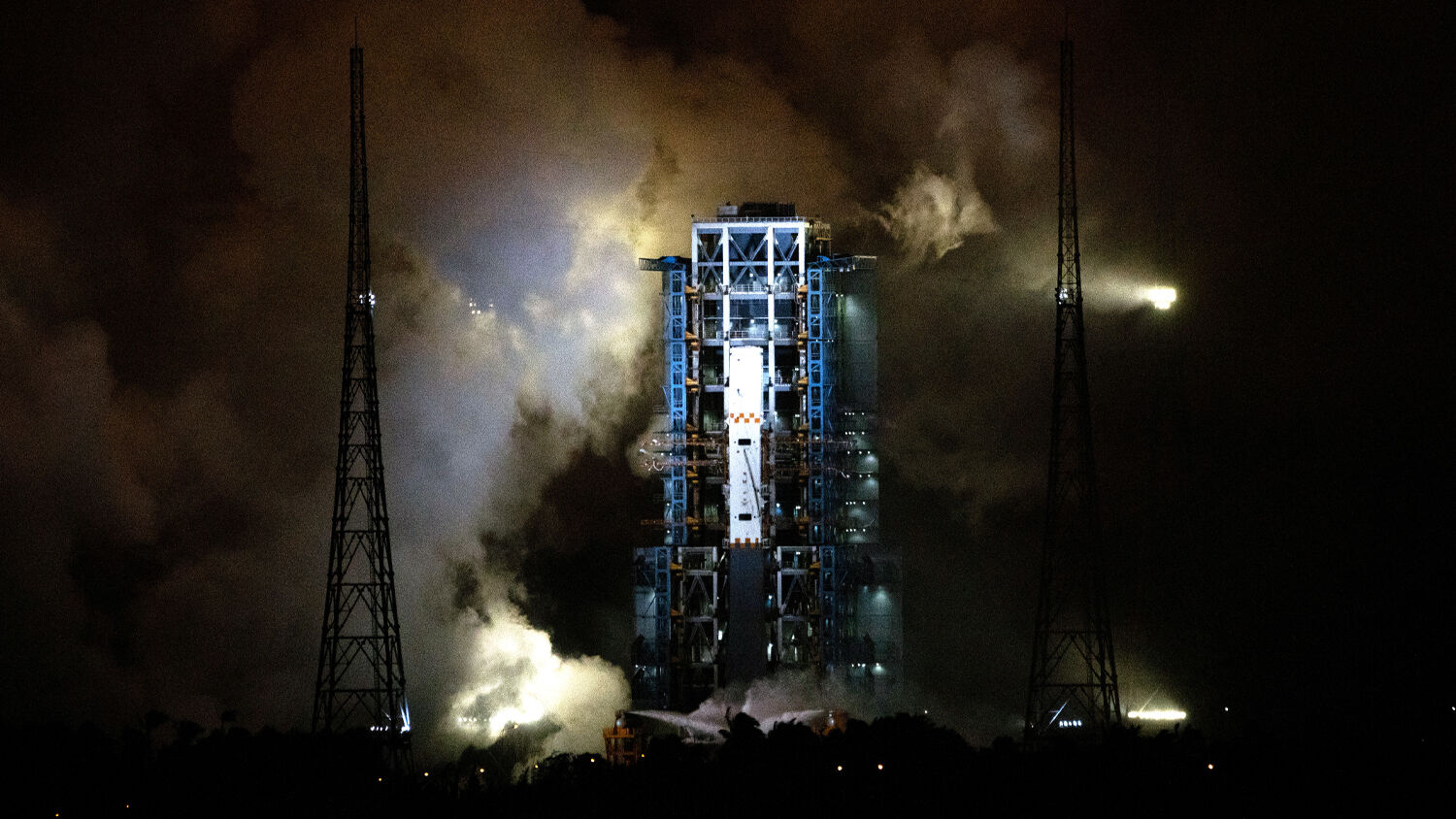 The Long March 5 rocket carrying Change 5 is seen on the launch pad at the Wenchang Space Launch Site on Hainan on November 24.
Artyom Ivanov/TASS/Getty Images

And it’s not even Lunar New Year’s.

China’s Chang’e-5 probe has completed a lunar mission and is set to return to Earth, as of December 7. Chang’e-5 will be the first operation to bring material from the moon to Earth in the 21st century. The only other countries to have ever done so were the United States and the Soviet Union. Chang’e-5 is bringing with it roughly 2 kilograms of lunar rocks and soil. It is expected to land in the province of Inner Mongolia later this month.

The last mission to bring back samples from the moon was the ussr’s Luna 24 mission in 1976. That was almost 50 years ago.

And China was sure to leave its mark. Chang’e-5 left a Chinese flag made of special material to withstand the lunar environment. The only other country to ever leave flags on the moon was the United States. And experts believe solar radiation would have bleached those star-spangled banners white by now.

Proud to have our national flag unfolded on the moon. The #Change5 probe collected samples and took off from moon. It will contribute to global scientific studies in fields such as the formation and evolution of the moon. pic.twitter.com/1UJskx3d9s

The U.S. hasn’t sent missions to the moon in decades. America is literally waving the white flag in front of an ascendant China.

Washington is attempting to catch up with Beijing’s new cosmic prowess. U.S. President Donald Trump has recently authorized the Artemis Program, an ambitious attempt to land the first woman on the moon by 2024.

The 21st century has seen only three successful (unmanned) missions to the moon. All are Chinese. And the missions have been productive. The Chang’e-3 lander has been sending data from the moon to Beijing for seven years. 2018 saw the Chang’e-4 probe become the first successful mission to the dark side of the moon. China even plans to set up a manned base on the moon by 2030.

And China’s cosmic competition with America isn’t limited to contests on the moon. China became the country with the most rockets launched into orbit as of 2018, surpassing America. Beijing plans to launch a space station in 2022. The U.S.-led International Space Station will retire later this decade, making China the only nation in control of a space station.

America has plenty of space programs that China has not yet matched. But it’s clear the Chinese are catching up fast and developing impressive achievements of their own.

And this means a lot more than just a loss of prestige for America. If you think that the goals of China’s space program are mainly scientific and benign, think again.

Chinese President Xi Jinping stated in 2013 that the nation’s space program was a “part of the dream to make China stronger.” Ye Peijian, chief commander of the Chinese Lunar Exploration Program, was more blunt. “The universe is like the ocean: The moon is like the Diaoyu Islands and Mars is like Scarborough Shoal,” he said in 2017. “We will be blamed by our descendants if we don’t go there … and others get there before us.” Diaoyu is the Mandarin name of Japan’s Senkaku Islands, while Scarborough Shoal is an island in the Philippines. China claims the Senkaku for itself and has unilaterally annexed Scarborough.

China has already made clear its desire to militarize space. We wrote in our February 2016 article “Space: The Final Military Frontier”:

China made headlines in 2007 when it shot down one of its own satellites as it orbited 530 miles above Earth’s surface. China’s action was certainly noteworthy—it demonstrated that America’s low-orbit satellites are vulnerable. But it wasn’t a great technological achievement. Prof. Desmond Ball of the Australian National University said at the time that shooting down the satellite “involved a fairly primitive system.”

“It is the sort of capability available to any country with a store of [medium-range/intercontinental ballistic missiles] or satellite-launch vehicles, and a long-range radar system, such as Japan, India, Iran and even North Korea,” he said.

Now China has taken its capability much further. It performed a test in 2013 that proved it could now shoot down satellites 19,000 miles above Earth’s surface.

If Earth were a basketball, then a satellite 530 miles away would be less than 1 inch from the ball’s surface. But with this latest innovation, China has proved that, on that same scale, it can shoot down a satellite nearly two feet away from the ball. This means just about every U.S. communication, spy and navigation satellite is within range.

The continent of Asia has seen some of the largest empires in history. The Mongols controlled a region from Korea to Iraq to Poland. But Xi Jinping’s China is taking warfare and empire to heights even Genghis Khan couldn’t have dreamed of. Xi wants to conquer outer space. He’s bringing China back to its historic name, “the celestial empire.”

An empire that includes China was prophesied in your Bible.

Revelation 16:12 speaks of a power bloc called “the kings of the east,” with “east” meaning east of the Holy Land. Revelation 9:16 mentions that this conglomeration would field an army of 200 million soldiers.

A related prophecy in Joel 2 speaks of “a great people and a strong; there hath not been ever the like, neither shall be any more after it, even to the years of many generations. A fire devoureth before them; and behind them a flame burneth: the land is as the garden of Eden before them, and behind them a desolate wilderness; yea, and nothing shall escape them” (verses 2-3).

Which eastern country could contribute heavily to an army of 200 million men, larger than any army in history? Which country today has a military strong enough to turn areas into a “desolate wilderness”? China certainly fits the bill.

But China won’t be alone. A related prophecy in Ezekiel 38 shows that Russia will be the leading force in this multinational Asian bloc. Japan and India will join as well, creating the largest, most powerful military colossus in human history. When this agreement is formalized, you can be sure that this world will be rocked like never before.

To learn more, please request our free booklet Russia and China in Prophecy.