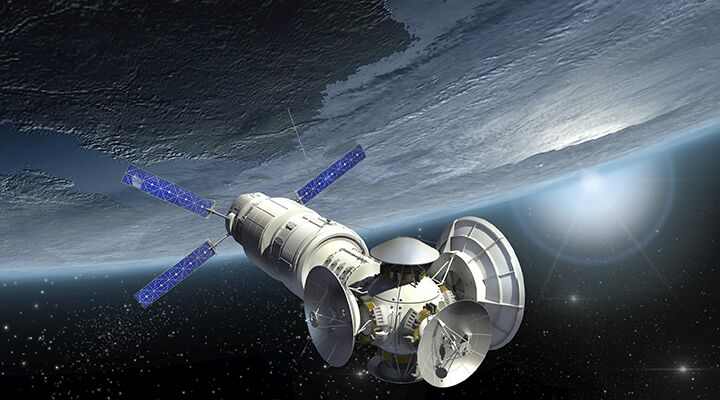 Star Wars. Star Trek. Guardians of the Galaxy. War in space is the standard plot for science fiction movies. It’s not something we expect to make a difference in our everyday lives.

But we already live in a “science fiction” world.

Right now, unmanned killer robots hover in the skies above the Middle East, ready to rain down death from above on America’s enemies. They are guided by pilots sitting hundreds of miles away, bouncing their instructions off satellites. Smart bombs are guided within inches of their targets using America’s gps satellite-navigation system. When America’s special forces take out a high-value target, their commanders and even the president in the White House can watch and respond in real time, thanks to satellite communication. American commanders view the battlefield and watch their soldiers move across it using American surveillance and positioning satellites. They rely on this information to coordinate attacks and avoid friendly fire. American missile-warning satellites are watching the atmosphere of the entire planet for any possible missile attack on the United States or its allies.

So much of America’s military dominance on Earth relies on its power above the skies—and America dominates space. No one else has anything like its capabilities. Even the excellent French military, after fighting alongside America in Afghanistan, had to unlearn its reliance on space-based systems.

It would be fantasy to suppose that other nations would not challenge the Americans’ dominance in this crucial theater of war.

Over the last few months, China has developed the ability to threaten America’s entire space-based infrastructure. Europe and Russia almost certainly have the same ability.

“The world’s most worrisome military flash point is arguably not in the Taiwan Strait, the Korean Peninsula, Iran, Israel, Kashmir or Ukraine. In fact, it cannot be located on any globe,” wrote Scientific American in October. “The contested territory? The no-man’s-land of Earth’s orbit, where a conflict is unfolding that is an arms race in all but name.”

America’s dominance in space has made the U.S. military uniquely vulnerable in this arena. The U.S. is “increasingly reliant on its space-based systems—of which a significant percentage are highly vulnerable and largely indefensible,” Stratfor wrote (Nov. 11, 2015). Striking one of these would deliver a “critical blow ahead of any physical strike.” Take away these space systems, and American commanders become blind, deaf and dumb.

Most other countries don’t have the same satellite technology. Therefore, as Stratfor explained, “[T]he United States cannot use the threat of disabling other countries’ space-based communications infrastructure to prevent attacks because other countries do not rely as heavily on the technology.” The type of mutually assured destruction that has so far prevented nuclear weapons from being used does not apply to space.

If another nation destroys all of America’s satellites, America cannot retaliate. Smart bombs and gps-guided battlefields help America avoid collateral damage and gives it an edge. But it also creates a unique dependency. Cut any other nation off from space, and it’s a minor inconvenience. But deny America the use of space, and its normal methods of conducting warfare are useless.

Stratfor continued: “[T]here is a strong incentive to pursue anti-satellite technology in the hope it could neutralize or disrupt one of the greatest advantages that the United States has ….”

Russia and China in particular are developing the capability to destroy America’s space infrastructure. To win, they don’t need to copy all of America’s technology. They just need to create systems to destroy it. Anyone who has played with wooden blocks knows that it is much easier (and cheaper) to destroy something than to build it up.

“Now, as China and Russia aggressively seek to challenge our superiority in space with ambitious defense and exploration programs of their own, this power struggle risks sparking a conflict that could cripple the entire planet’s space-based infrastructure,” Scientific American wrote. “And though it may begin up high, such a conflict could easily ignite full-blown war on the surface of Earth” (op. cit.).

China made headlines in 2007 when it shot down one of its own satellites as it orbited 530 miles above Earth’s surface. China’s action was certainly noteworthy—it demonstrated that America’s low-orbit satellites are vulnerable. But it wasn’t a great technological achievement. Prof. Desmond Ball of the Australian National University said at the time that shooting down the satellite “involved a fairly primitive system.”

“It is the sort of capability available to any country with a store of [medium-range/intercontinental ballistic missiles] or satellite-launch vehicles, and a long-range radar system, such as Japan, India, Iran and even North Korea,” he said.

Now China has taken its capability much further. It performed a test in 2013 that proved it could now shoot down satellites 19,000 miles above Earth’s surface.

If Earth were a basketball, then a satellite 530 miles away would be less than 1 inch from the ball’s surface. But with this latest innovation, China has proved that, on that same scale, it can shoot down a satellite nearly two feet away from the ball. This means just about every U.S. communication, spy and navigation satellite is within range.

Air Force Lt. Gen. John “Jay” Raymond, commander of the Joint Functional Component Command for Space, confirmed this last March, telling the U.S. House of Representatives, “We are quickly approaching the point where every satellite in every orbit can be threatened.”

If China can do this, the more advanced space powers of Russia and Europe likely possess the same capability. No wonder the rand Corporation published a report in September saying that “the risk to most U.S. space functions appears to be growing faster than the U.S. ability or effort to mitigate them” (“The U.S.-China Military Scorecard”).

Shooting down a satellite is a blatant act of aggression, but Scientific American describes other, subtler ways of sabotaging a satellite’s functions: “A spacecraft could simply approach a satellite and spray paint over its optics, manually snap off its communications antennas, or destabilize its orbit. Lasers, too, could be used to temporarily cripple or permanently damage a satellite’s components, particularly its delicate sensors. And radio or microwaves could jam or hijack transmission to or from ground controllers” (op. cit.).

Russia, China and the U.S. have all demonstrated these kinds of abilities: satellites that can maneuver close enough to other satellites and then destroy or destabilize them. Brian Weeden, an analyst with the Secure World Foundation who used to work at the U.S. Strategic Command’s Joint Space Operations Center, noted that these capabilities “present a significant challenge for future space security and stability.” In October, he wrote a report focusing on America’s, Russia’s and China’s activities in this area, but he noted that “other spacefaring countries such as Canada, Japan and Europe already possess many of the same capabilities.”

In June 1999, Trumpet editor in chief Gerald Flurry quoted from Intelligence Digest, which said, “[T]he Gulf War showed what a critical role technology now plays in warfare. But the course of a battle would be very different if effective technology-sabotaging measures could be instituted against the superior force. … Computer dependence is the Western world’s Achilles’ heel, and within a few years this weakness could be tested to the full” (emphasis added).

Most of Mr. Flurry’s article focused on cyberwarfare and the danger of a cyberattack, which he identified as America’s Achilles’ heel. But many of the points he made also apply to America’s reliance on satellite observation, navigation and communication technology.

The U.S. military is growing more aware of its vulnerability here. For example, U.S. Navy personnel are now trained to navigate using the stars. But these kinds of efforts would only ameliorate part of the problem. They would keep a destroyer from crashing, for example, but they couldn’t guide the ship’s cruise missiles.

America assumes its military is absolutely predominant, but it has not fought a war against a major power since World War ii. There has been no test of how resilient America’s technological edge would prove in such a conflict.

In their novel Ghost Fleet, military experts P. W. Singer and August Cole imagine how World War iii could be fought. It begins with a cyberattack and the destruction of America’s satellites. Robbed of its technological edge, America is all but crippled.

It’s a fictional scenario. But the technology is no longer fiction. America is more vulnerable than our cozy lives would let us think.