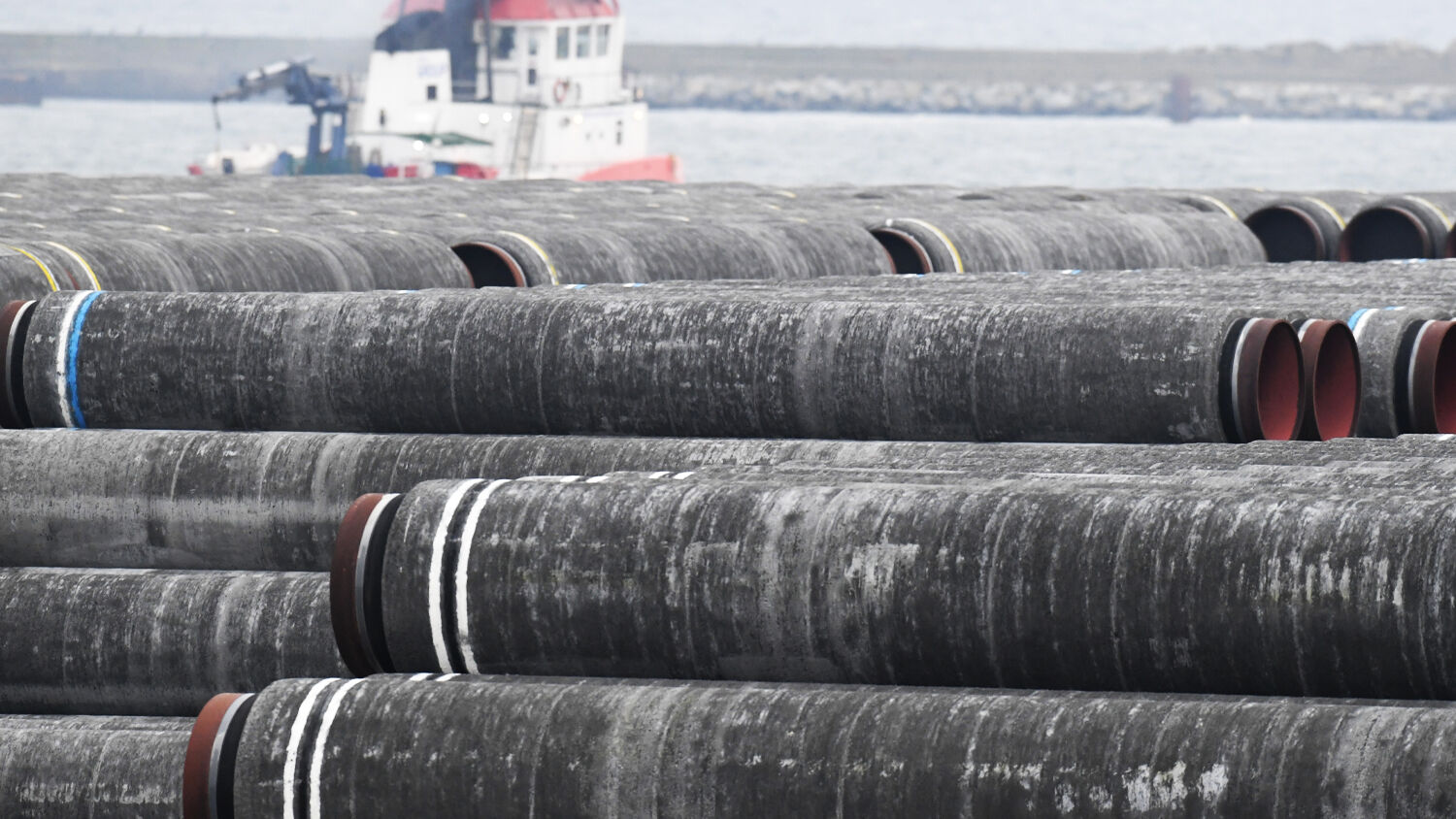 Pipes for the Nord Stream 2 Baltic Sea gas pipeline are stored on the premises of the port of Mukran near Sassnitz.
Stefan Sauer/picture alliance/Getty Images

Nord Stream 2 is more than an energy project. It is a warning sign.

Construction of the Nord Stream 2 gas pipeline restarted on December 5 in the Baltic Sea, after a temporary halt due to American sanctions. When complete, the pipeline will change Germany’s relationship with Russia, the United States and the rest of Europe.

Nord Stream 2 is expected to bring 55 billion cubic meters of natural gas into Germany every year. Beginning south of St. Petersburg, Russia, the pipeline crosses Finnish, Swedish and Danish waters before ending in the northeastern German town of Lubmin. The work will focus first on the 10-mile section inside Germany’s exclusive economic zone. After this, a 37-mile segment remains—in Danish waters.

In December 2019, the United States sanctioned all vessels involved in the project, stopping construction. This compelled Swiss pipe-laying company Allseas to pull out of the project. This October, a bipartisan committee in U.S. Congress sanctioned the mayor of the German town of Sassnitz, Frank Kracht. Sassnitz had been harboring a Russian pipe-laying ship. Kracht himself is the largest shareholder in Mukran, the company that runs the port. All this caused outrage in Germany and prompted a search for ways to skirt U.S. sanctions. Now, it appears Germany has found one.

The state of Mecklenburg-Vorpommern, where the pipeline enters Germany, recently created a trust fund to help port industries in Sassnitz. Companies working on the pipeline can claim government funding to offset American sanctions. The trust fund is registered as a nonprofit and cannot be sanctioned. German news station ndr called this a “clever legal gimmick.” The head of this fund is former Mecklenburg-Vorpommern Premier Erwin Sellering. He is friends with former Chancellor Gerhard Schröder, who allowed the construction of the first Nord Stream pipeline. For its part, Russia has deployed its own pipe-laying ship to replace the Swiss ones.

Controversy about the pipeline centers on how it empowers Russia. Though registered in Switzerland, the corporate branch of Nord Stream 2 is owned by Russian oil giant Gazprom. Also, the pipeline bypasses Ukraine, depriving it of transit fees. Worse, Russia could shut off gas to Crimea or large parts of Ukraine without impacting Europe.

Germany is taking a risk. Whoever controls a nation’s energy supply holds a major advantage in the event of a dispute. At the same time, Germany has positioned itself to control Europe’s access to energy. Also quite telling is who Germany decided not to buy gas from.

Germany’s cooperation with Russia has an ominous historical precedent. Both Nord Stream projects are a critical milestone in this cooperation. An essay in the German newspaper Frankfurter Allgemeine Zeitung (faz) makes this point. It argues that Germany is reverting to its tendency of aligning with Russia because of perceived injustice from the West. To support this, it quotes Russian President Vladimir Putin’s June article about the Molotov-Ribbentrop Pact. In it, he called Germany’s “national humiliation” at Versailles a “deep injustice.” He criticized the West for trying to “rob” Germany. According to faz, Putin also used these words to describe America’s behavior toward Russia at the end of the Cold War.

The construction of Nord Stream 2 sends a message to the United States. If Germany had wanted to receive most of its gas from the U.S., it could have. The U.S. became a net exporter several years ago. Europe has Atlantic and Mediterranean ports where it can receive liquified natural gas. Yet Germany is eager to trust Russia instead.

Nord Stream 2 strengthens Germany’s control over Europe. Being the destination for Russian gas allows it to control prices. The economic benefits are expected to be substantial. A German study published September 2017 showed that Nord Stream 2 will lower gas prices, especially in Germany and Eastern Europe. In the scenarios tested, European Union nations could save between 13 and 32 percent on their gas imports.

If these numbers prove accurate, it is easy to see why Germany would want to make a deal with Russia. But there is a deeper reason why these two nations have chosen to cut a deal now.

“History shows that Germany and Russia are not actually partners,” wrote Trumpet editor in chief Gerald Flurry in his 2017 article “Germany and Russia’s Secret War Against America.” “When they enter into peace deals and economic partnerships, it is a signal that either or both are preparing for some kind of imperialistic exploit.” The Molotov-Ribbentrop Pact, signed at the start of World War ii, gave Russia part of Poland and other conquered nations in exchange for staying out of the war. “This makes the Nord Stream 2 deal extremely concerning,” Mr. Flurry wrote.

Why is it concerning? Because the Bible identifies and prophesies about Germany and Russia. It shows that they will work together for a short time to bring down the United States.

The biblical name for Germany is “Assyria” (Isaiah 10:5). The Bible also connects Assyria with “the north,” calling it, together with other European powers, “the king of the north” (Daniel 11:40).

Several prophecies, including one in Jeremiah, warn that Germany will become a “boiling pot” simmering with hatred for the U.S. “And the word of the Lord came unto me the second time, saying, What seest thou? And I said, I see a seething pot; and the face thereof is toward the north. Then the Lord said unto me, Out of the north an evil shall break forth upon all the inhabitants of the land” (Jeremiah 1:13-14).

More and more, Germany and Russia share similar feelings toward the United States. A prophecy in Isaiah 23 shows that Europe will work with Russia and other Asian nations to besiege the American economy (read our reprint article “The Great Mart of Nations” for more in-depth analysis).

Nord Stream 2 and the partnership it represents are a warning sign that Germany’s “secret war” will soon become overt. To see how Europe’s most controversial pipeline fits into this prophecy, read our article “Germany and Russia’s Secret War Against America,” by Gerald Flurry.