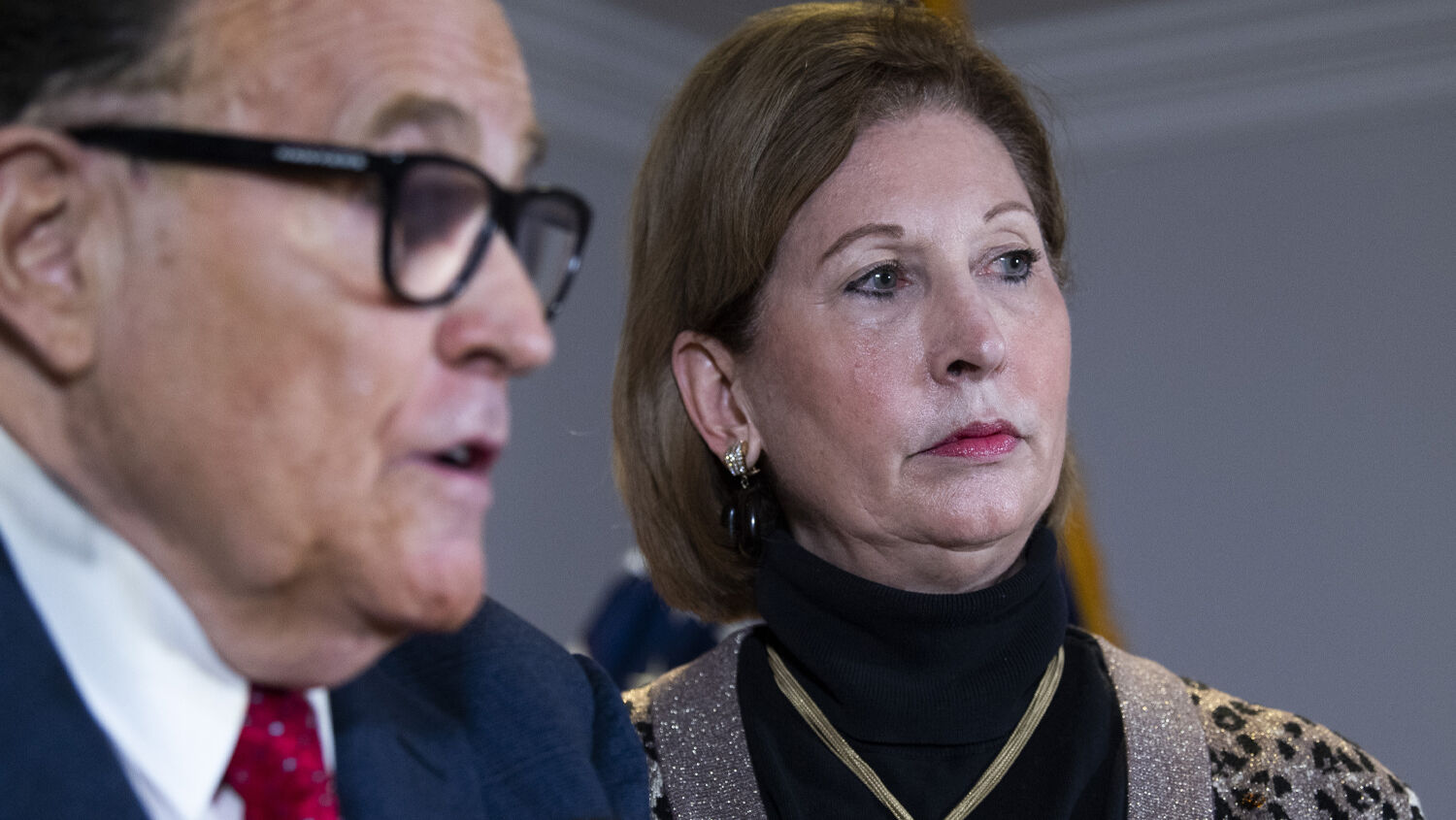 Rudolph Giuliani (left) and Sidney Powell, attorneys for President Donald Trump, conduct a news conference at the Republican National Committee on lawsuits regarding the outcome of the 2020 presidential election on Thursday, November 19.
Tom Williams/CQ-Roll Call, Inc via Getty Images

Former federal prosecutor Sidney Powell in a recent interview at Fox Business News discussed evidence she is amassing in a case regarding colossal levels of voter fraud in the last United States presidential election. She claimed that massive voting irregularities allowed Joe Biden to steal the election from President Donald Trump. She said she’s “going to release the kraken” with all of the evidence gathered.

The media has generally not been kind to Powell for her claims. The Daily Mail called her a “conspiracy theory-obsessed lawyer.” Late Night talk show host Seth Meyers called her “the craziest addition to the Trump Cinematic Universe” and “crazier than a cereal mascot.”

Her main claim is the voting machines supplied by Dominion Voting Systems and Smartmatic were manipulated to adjust the vote tallies to Joe Biden’s favor. Powell says that, had fraud not taken place, Donald Trump would have won the election in a “landslide.” Dominion is contracted in 28 states that collectively make up 40 percent of America’s population. Smartmatic’s voting technology meanwhile is used in 16 different states.

These are bold allegations. Is there any truth to them?

Today, any criticism of these firms is labeled extreme. Yet just a few years ago, cnn aired reports questioning their reliability, and Democratic politicians pushed for investigations.

Sequoia Voting Systems was purchased by Dominion in 2010. Prior to that, it was owned by another voting machine contractor, Smartmatic. Smartmatic was founded in 2000 by several Venezuelan entrepreneurs, including Antonio Murgica Rivero and Alfredo José Anzola. The company is quite controversial for its dealings with the late populist leader of Venezuela, Hugo Chávez. In 2004, when Smartmatic was relatively small and unknown and had no prior experience in working in national elections, Chávez chose them to supply the voting machines for a referendum on whether to keep Chávez as president. He won amid allegations of fraud.

The Venezuelan government continued to use Smartmatic for two other elections. There was also controversy surrounding Bizta, a smaller voting machine corporation and an official contractor in Venezuela. Bizta was owned by Antonio Murgica Rivero and Alfredo José Anzola—the same people who founded Smartmatic—and the Venezuelan government. Caracas purchased 28 percent of the company.

Chávez has been dead for some time now. But his successor, Nicolás Maduro, has continued his policies. Venezuela is now an anti-American dictatorship mired in poverty and corruption.

Because of these circumstances, Smartmatic was under investigation by the Committee on Foreign Investment in the United States (cfius) in 2006. In order to end the scrutiny, Smartmatic sold Sequoia to Dominion. By the time of the merger, Sequoia was the third-largest voting firm in America.

Democratic Rep. Carolyn Maloney was the first to alert the federal government of the possible problems with letting Smartmatic use voting software in the United States. cnn and other mainstream sources regularly reported on Maloney’s concerns. Lou Dobbs, for example, in 2006, discussed the “potential risk to the democratic process” involved with Sequoia and Smartmatic.

When Sequoia was sold, Maloney’s office put out a press release, saying: “Congresswoman Carolyn Maloney (D-NY) shined the congressional spotlight on the Sequoia purchase last year by Smartmatic because it posed serious national security concerns about the integrity of our elections.”

Smartmatic still owns the intellectual property rights to Sequoia, even though Dominion now owns the firm.

This caught the attention of a commentator at the Huffington Post. “Canadian-based Dominion Voting Systems has quietly announced its second acquisition of a major U.S. voting machine company in as many months and, right out of the gate, they’ve lied about it,” wrote investigative journalist Brad Friedman in 2010. “Not an auspicious beginning for the company which may now, virtually overnight, have become the dominant private e-voting machine company in this country.”

He noted that “despite representations to the contrary—possibly even to U.S. government investigators—the IP for the vast-majority/near-entirety of Sequoia’s voting systems was actually secretly owned by the Hugo Chavez-tied, Venezuelan-based firm Smartmatic.”

Additionally, Malloch-Brown is a close associate of and has worked in numerous positions for billionaire George Soros, who has funded radical groups like Black Lives Matter and groups associated with the terror group Popular Front for the Liberation of Palestine.

In the aftermath of the 2020 U.S. election, Smartmatic released a statement supposedly to counter the spread of misinformation. In that statement, Smartmatic claimed that it never provided Dominion “with any software, hardware or other technology.” It also claimed that the company “does not have any ties to any governments or political parties in any country,” never being “owned, funded or backed by any government.”

Smartmatic sold Dominion its subsidiary while still holding onto the IP rights. It also received $120 million from the Venezuelan government for its work there.

All of their cooperation makes the statement’s claim that Smartmatic and Dominion are “competitors” sound hollow.

Meanwhile, Dominion also has a reputation when it comes to unreliability.

Dominion received a letter last year from Senators Elizabeth Warren, Amy Klobuchar and Ron Wyden as well as Rep. Mark Pocan detailing their concerns about Dominion’s technology being “prone to security problems.” Some of the voting irregularities they mentioned, which do not concern Dominion only, include a 2018 incident in South Carolina where voting machines switched voters’ choices and a 2019 incident in Pennsylvania where a state judicial candidate only received 164 out of 55,000 votes. The latter incident had both Democratic and Republican figures in the state concerned.

Given all of this negative publicity, especially with Sidney Powell’s coverage, you would think that Dominion would have an army of lawyers making lawsuits and throwing around accusations of defamation of character. Yet we see none of that. No executives, public relations managers, or any other high-ranking figures from Dominion have come out to refute any of the claims. Apparently, the best they could do was to put an official statement on their website.

After all, with as many resources it has, Dominion would be able to silence somebody like Sidney Powell easily—if it had nothing to hide.

But what if it did?

Between Smartmatic, which is known to have organized elections in places like Venezuela that aren’t known for their free and fair electoral system, and Dominion, which is associated with Smartmatic and has been publicly called out—by Democratic senators no less—for the unreliability of its technology, there is cause for concern.

The left has been asking key questions about these companies for years. But now any criticism is forbidden. Why?

The U.S. is going through a bitterly contested election. But there’s a crucial spiritual dimension to this contest that many don’t see.

“By most appearances, Joe Biden will be America’s next president,” wrote Trumpet editor in chief Gerald Flurry. “But I absolutely do not believe that at all. Mr. Trump will weather this storm too. Regardless of what the media says or how things look right now, I am confident Donald Trump will remain president. I am also certain that we are about to see some of the biggest frauds exposed perhaps ever!”

That spiritual dimension explains why he made this forecast. To understand it, read his article “Why Donald Trump Will Remain America’s President.” To keep up with this story as it unfolds, subscribe to the Trumpet Daily Radio Show podcast.